First Image of a Black Hole Captured in M87

The historic first image of a black hole was released by the Event Horizon Telescope (EHT) Collaboration on April 10, 2019. An international team of scientists used observations with the Event Horizon Telescope, a worldwide network of eight ground-based radio telescopes, to capture an image of the supermassive black hole at the heart of the supergiant elliptical galaxy Messier 87 (Virgo A).

The image is the first direct visual evidence for the existence of supermassive black holes and their shadows.  It is the result of a decade of work that involved aligning countless working parts and obtaining the highest resolution possible from ground-based telescopes and then sifting through 5 petabytes (5 million gigabytes) of data using supercomputers to retrieve the final images. 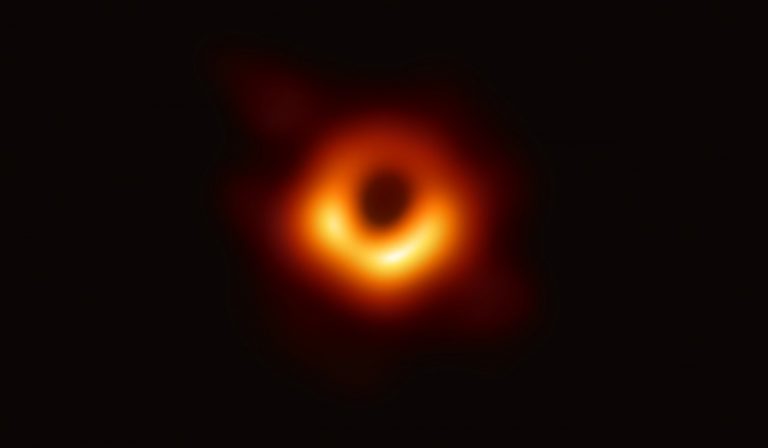 The image released last week was taken in April 2017. It took researchers two years to process more than a petabyte of data collected by the EHT over four nights of observations. The image shows that there is a real event horizon, as predicted by general relativity. Even though black holes themselves are invisible, their effect on the material around them makes observations possible. The visible ring in the image is not the event horizon itself, but indicates a sphere of gravitationally lensed photons, bent by the gravity of the black hole. 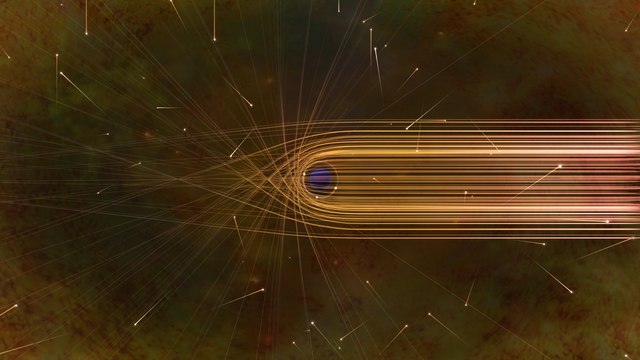 This artist’s impression depicts the paths of photons in the vicinity of a black hole. The gravitational bending and capture of light by the event horizon is the cause of the shadow captured by the Event Horizon Telescope.

The black hole’s gravity has a dramatic effect on the surrounding space, creating an accretion disk of gas and material that orbits the singularity at light speeds. The actual event horizon is about 2.5 times smaller than its shadow and spans just under 40 billion kilometres.

To make direct imaging of the black hole possible, eight telescopes around the world were linked together to work as a single interferometer: the Atacama Large Millimeter/submillimeter Array (ALMA) and the Atacama Pathfinder Experiment (APEX) in northern Chile, the IRAM 30-meter telescope in Spain, the James Clerk Maxwell Telescope (JCMT) and the Submillimeter Array (SMA) in Hawaii, the Large Millimeter Telescope Alfonso Serrano in Mexico, the Submillimeter Telescope (SMT) in Arizona, and the South Pole Telescope (SPT) in Antarctica. 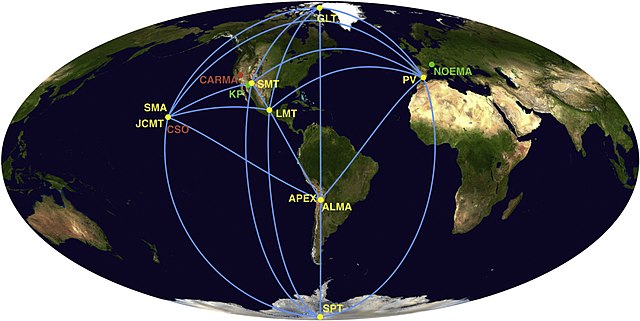 Map of the EHT. Stations active in 2017 and 2018 are shown with connecting lines and labeled in yellow, sites in commission are labeled in green, and legacy sites are labeled in red. Nearly redundant baselines are overlaying each other, i.e., to ALMA/APEX and SMA/JCMT. Such redundancy allows improvement in determining the amplitude calibration of the array. Image: The Event Horizon Telescope Collaboration

The telescopes were synchronised by atomic clocks to work together as a single Event Horizon Telescope. The EHT used very-long-baseline interferometry (VLBI), a technique used in radio astronomy that makes it possible to collect a signal at multiple radio telescopes and achieve a resolution proportional to the observing frequency. In this instance, the angular resolution was 20 micro-arcseconds, one that would make it possible to read a newspaper in New York from a café in Paris. Each telescope produced about 350 terabytes of data per day during the observations and the data was combined and converted into an image by supercomputers at the Max Planck Institute for Radio Astronomy in Bonn, Germany and MIT Haystack Observatory in Massachusetts.

To ensure that the end result was valid, the EHT Collaboration tasked four separate teams with assembling an image based on the data collected from the observations on April 11. Once they compared the four images, which took seven weeks to create, the researchers found that each showed a ring that was roughly the same diameter and had a brighter segment in the southern portion. 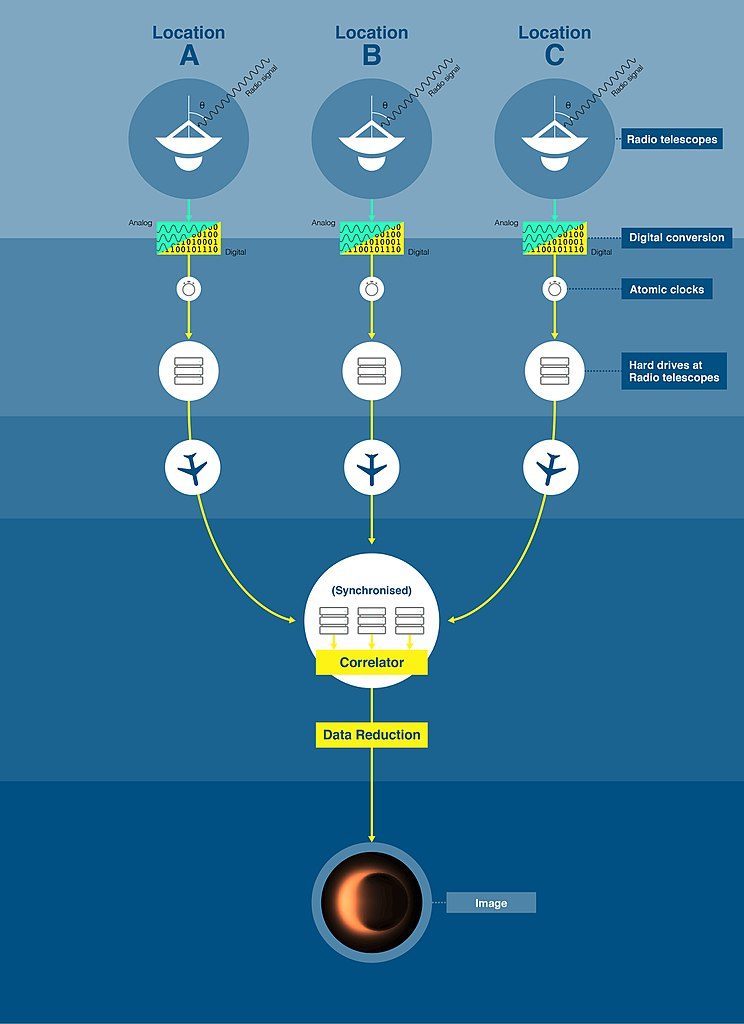 A schematic diagram of the VLBI mechanism of EHT. Each antenna, spread out over vast distances, has an extremely precise atomic clock. Analogue signals collected by the antenna are converted to digital signals and stored on hard drives together with the time signals provided by the atomic clock. The hard drives are then shipped to a central location to be synchronised. An astronomical observation image is obtained by processing the data gathered from multiple locations. Image: ALMA (ESO/NAOJ/NRAO), J.Pinto & N.Lira

Messier 87 was selected over other possible targets closer to Earth, such as Sagittarius A*, the black hole in our own galaxy, for several reasons. The main ones were the estimated mass of the black hole in M87, the galaxy’s relative proximity and its position in the sky. M87’s location in the Virgo Cluster makes it possible to observe the galaxy from all eight telescope locations around the world. 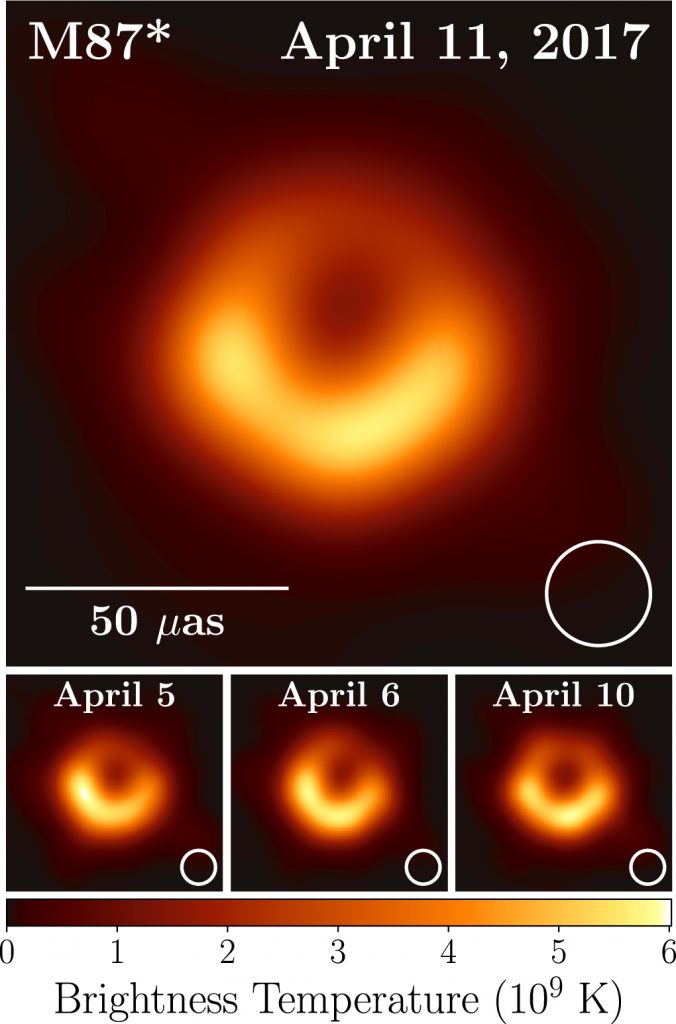 Top: EHT image of M87* from observations on 2019 April 11 as a representative example of the images collected in the 2019 campaign. Image: The Event Horizon Telescope Collaboration

M87 was discovered by Charles Messier in March 1781, along with seven other bright Virgo Cluster members. It is the central galaxy of the Virgo A subcluster, the largest of the three dominant subgroups of galaxies in the cluster. The galaxy lies at the centre of the cluster, just to the south of Markarian’s Chain of galaxies.

The European Southern Observatory (ESO) released a 17-minute film that explores the efforts of the EHT collaboration that led to the image (below). The press conference held on April 10 is available here.