Messier 35 (M35) is a large open star cluster located in the northern constellation Gemini. The cluster consists of several hundred stars, of which 120 are brighter than magnitude 13. The central region has a density of 6.21 stars per cubic parsec.

M35 has the Trumpler classification III 3 r, which means that it is detached from the surrounding star field with no noticeable concentration (III), that it contains both bright and faint stars (3) and that it is richly populated (r), with more than 100 stars.

The cluster has an apparent magnitude of 5.3 and lies at an approximate distance of 2,800 light years from Earth. It has the designation NGC 2168 in the New General Catalogue.

Messier 35 is the only Messier object in Gemini. The best time of year to observe it from northern latitudes is in the winter months, when the constellation is high overhead. M35 lies near the border with Taurus, Auriga and Orion.

It is easy to find as it is located about 3.5 degrees northwest of the star Mu Geminorum, in the middle of a region that contains some of the brightest stars in the sky: Aldebaran, Capella, Betelgeuse, Castor and Pollux.

The cluster’s brightest stars can be resolved in 10×50 binoculars. Small telescopes will reveal some of the fainter stars, while 6-inch and 8-inch telescopes at low magnifications show a field full of stars across the cluster. 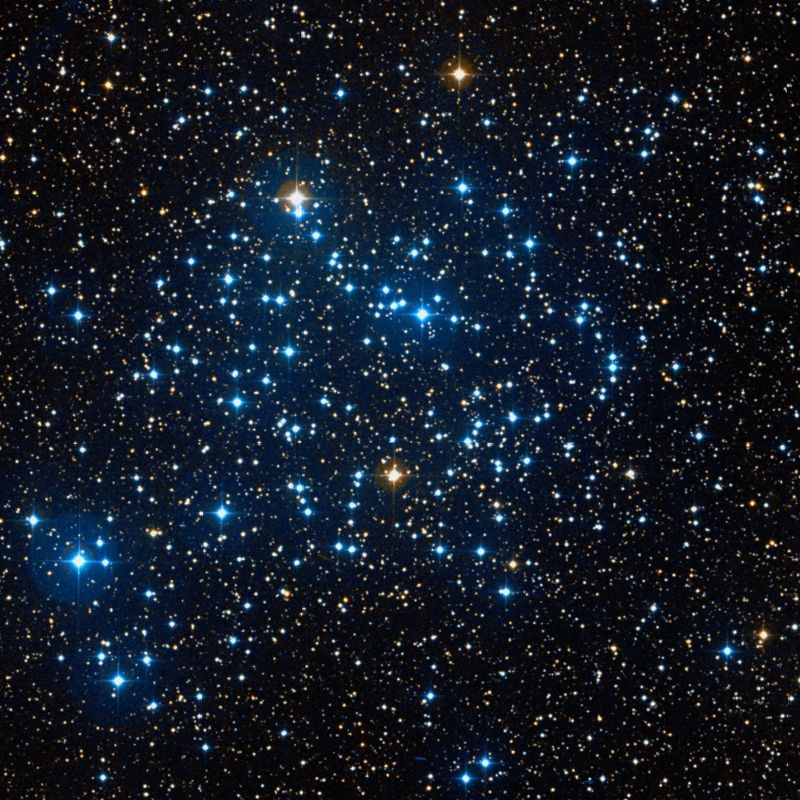 An easy way to locate M35 is to draw a line from Betelgeuse in Orion to Pollux in Gemini and find Alhena, Gamma Geminorum, the brightest star along this imaginary line and the third brightest star in Gemini, after Pollux and Castor. A line drawn from Alhena in the direction of Capella in Auriga constellation leads directly to the cluster. Capella is easy to identify as it is the sixth brightest star in the sky, outshining the other bright stars in the vicinity, and part of the Auriga pentagon, formed by the constellation’s brightest stars.

The estimated age of M35 is about 110 million years. The hottest main sequence stars in the cluster have the spectral classification B3. M35 also contains more evolved stars, including several orange and yellow giants. The cluster is approaching us at 5 km/s.

Messier 35 occupies an area of 28 arc minutes on the sky, which is roughly equal to the size of the full Moon. The cluster has a true diameter of about 24 light years. The region within the central 3.75 parsecs of the cluster has an estimated mass between 1,600 and 3,200 times solar. 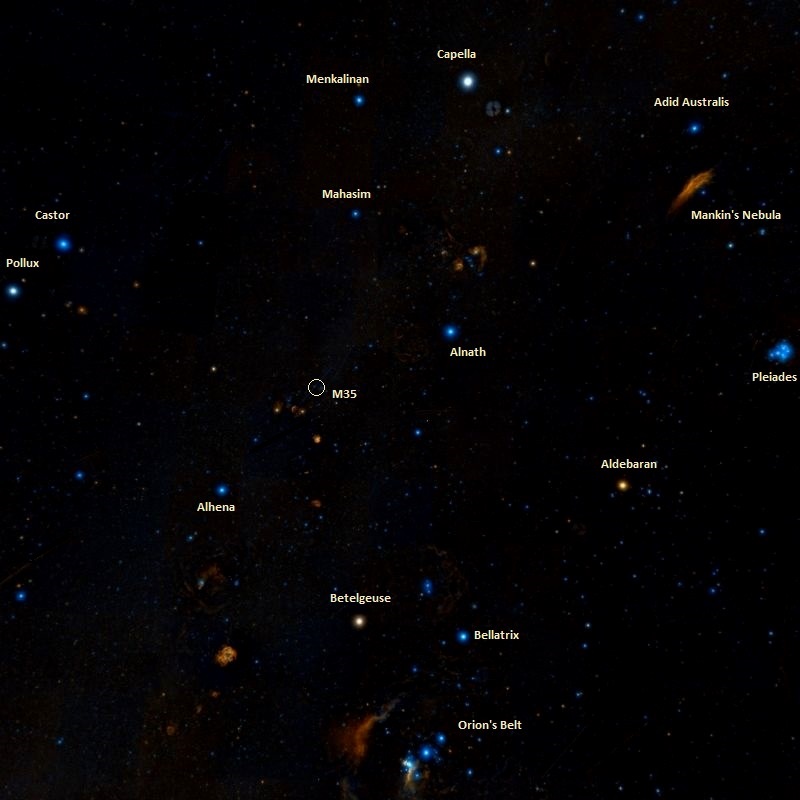 Messier 35 was discovered by the Swiss astronomer Jean-Philippe Loys de Chéseaux. English astronomer John Bevis found the cluster independently before 1750 and included it in his Uranographia Britannica.

Charles Messier included the open cluster in his catalogue on August 30, 1764 with the following note:

In the night of August 30 to 31, 1764, I have observed a cluster of very small stars, near the left foot of Castor, little distant from the stars Mu & Eta of that constellation. When examining this star cluster with an ordinary [non-achromatic] refractor of 3 feet [FL], it seemed to contain nebulosity; but having examined it with a good Gregorian telescope which magnified 104 times, I have noticed that it is nothing but a cluster of small stars, among which there are some which are of more light; its extension may be 20 minutes of arc. I have compared the middle of this cluster with the star Eta of Castor [Eta Geminorum]; its right ascension has been concluded at 88d 40′ 9″, & its declination at 24d 33′ 30″ north. 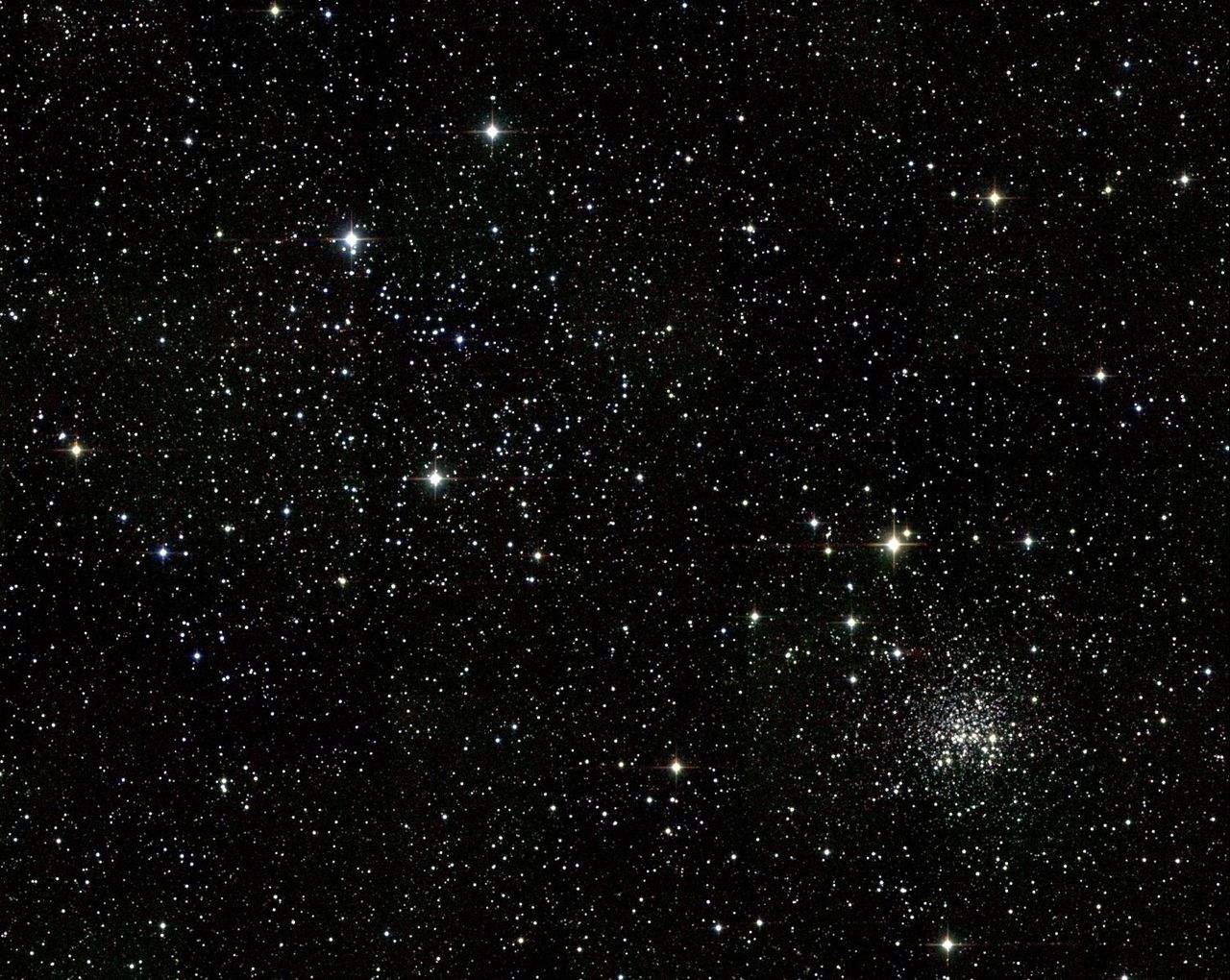 Messier 35. Atlas Image mosaic obtained as part of the Two Micron All Sky Survey (2MASS), a joint project of the University of Massachusetts and the Infrared Processing and Analysis Center/California Institute of Technology, funded by the National Aeronautics and Space Administration and the National Science Foundation.

A cluster, near Castor‘s right foot, in the Galaxy, discovered and registered by Messier in 1764. It presents a gorgeous field of stars from the 9th to the 16th magnitudes, but with the centre of mass less rich than the rest. From the small stars being inclined to form curves of three, four, and often with a large one at the root of the curve, it somewhat reminds one of the bursting of a sky-rocket.

Under favorable circumstances this cluster can be distinguished by the naked eye; it therefore may be comparatively near us. It must be sought on the line between Castor and Zeta on the tip of the Bull‘s southern horn, at exactly one-quarter of the distance from the latter: or a line led from Alpha Leporis through Betelgeuze, and extended 18deg beyond, will strike upon it.

This object being so handy to the point assumed by Hipparchus, as the north extreme of the ecliptic,I swept for anything which might be on the actual spot, under the necessary corrections, in AR 6h, and Dec N 23d 27′. After some search, I found a star of 12th magnitude, but too small [faint] for having its place differentiated for any permanent purpose.

Another open cluster, NGC 2158, lies about 15 arc minutes to the southwest of M35 and can be seen in larger amateur telescopes. NGC 2158 has a visual magnitude of 8.6 and occupies an area of 5 arc minutes. It is considerably older, more compact and contains more stars. It is also more than five times more distant than M35 and the two clusters are not physically related.

A similar, but less populated open cluster than NGC 2158 can be found 50 arc minutes west of M35. IC 2157 may appear in the same field of view as the other two clusters in wide-field optics. It has an apparent diameter or 8 arc minutes and an apparent magnitude of 8.4. 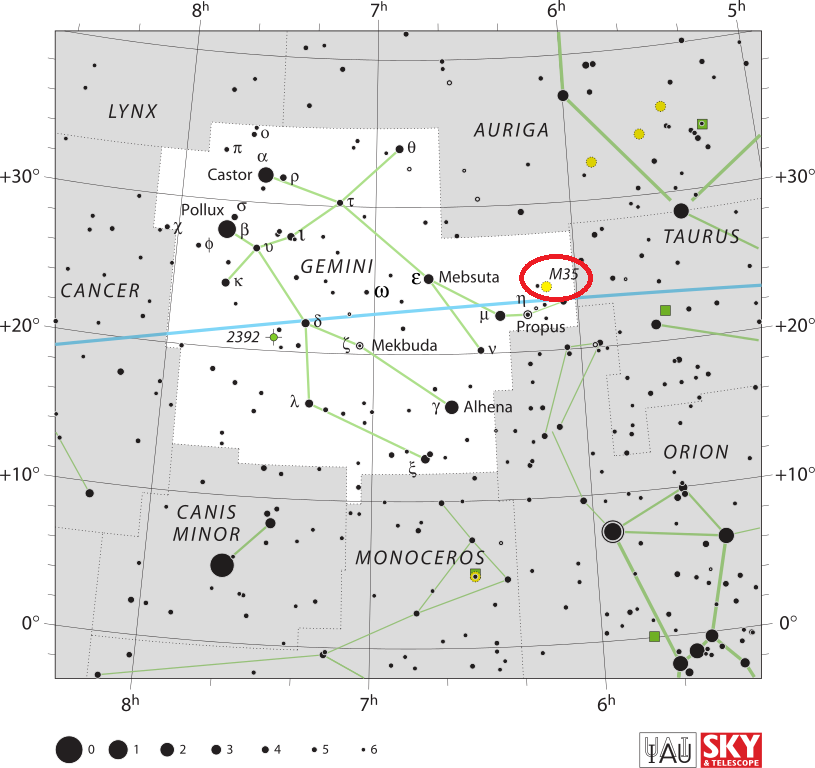