Messier 77 (M77), also known as Cetus A, is a barred spiral galaxy located in the constellation Cetus. It lies at a distance of 47 million light years and has an apparent magnitude of 9.6. The galaxy has the designation NGC 1068 in the New General Catalogue.

Messier 77 is one of the largest galaxies included in the Messier catalogue. It occupies an area of 7.1 by 6 arc minutes of apparent sky, which corresponds to a linear diameter of 170,000 light years. The bright parts measure roughly 120,000 light years. The galaxy’s inclination is estimated to be 40 degrees.

The galaxy is easy to spot with binoculars as it is quite compact and has a bright core. Small telescopes will reveal a fuzzy ball of light with a bright centre, and 4-inch instruments will also show the galaxy’s oval halo. 8-inch and larger instruments reveal the details of the galaxy’s structure.

Messier 77 can be found about 1 degree to the southeast of Delta Ceti, a subgiant star with a visual magnitude of 4.08. The galaxy is located only a few degrees away from Mira (Omicron Ceti), the famous red long-period variable star. The best time of year to observe M77 is during the autumn. 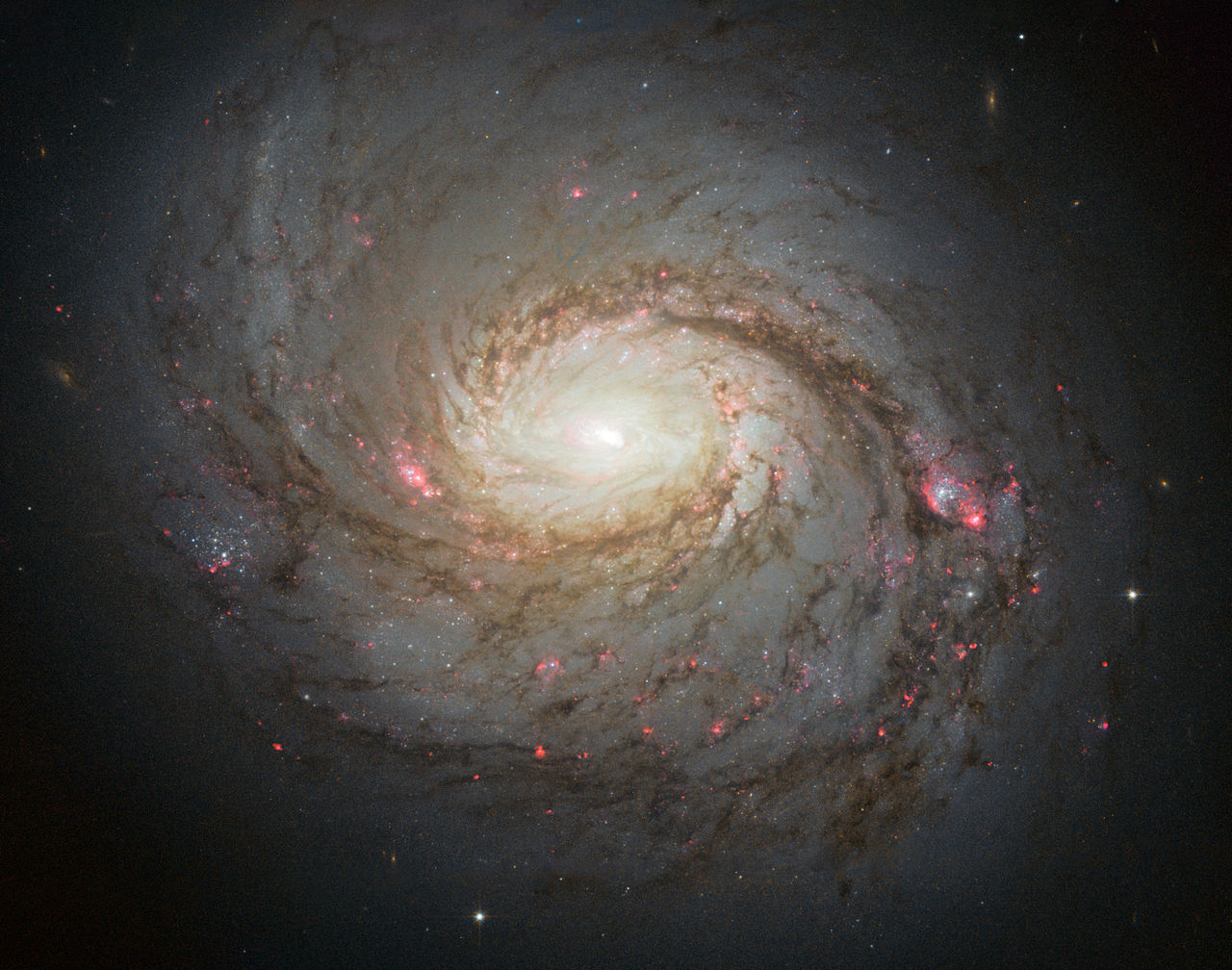 Messier 77 is an active galaxy. It is classified as a type 2 Seyfert galaxy and is the brightest galaxy of this type in the sky. Named after the American astronomer Carl Seyfert, who was the first to identify the class in 1943, Seyfert galaxies are characterised by hot, highly ionised gas around an extremely active centre. M77 serves as the protoype for the class. The galaxy’ active galactic nucleus (AGN) is hidden from view by dust and cannot be seen in visible light.

Messier 77 is also the nearest Seyfert galaxy to the solar system, and one of the most studied galaxies in the sky. Classified as a barred spiral, M77 has loosely wound spiral arms, dotted with countless star forming regions, and a small central bulge. The supermassive black hole at the galaxy’s core has an estimated mass of around 15 million times that of the Sun and is less than 12 light years in diameter. The galaxy itself has a mass of about 1 billion solar masses.

The galaxy’s spectrum shows broad emission lines, indicating that large gas clouds are rapidly moving out of the galaxy’s central region at velocities of several 100 km/s. The energy source responsible for the high velocities is found in the nucleus of M77, which is a strong source of radio emissions. The source is known as Cetus A and 3C 71.

New insight into the central region of the active galaxy NGC 1068, at increasing magnification. Image a (left) is a colour composite of NGC 1068, obtained with the Hubble Space Telescope (HST); showing stellar light in blue, oxygen ionized by the active nucleus in yellow, and inonized hydrogen in red. Image b (middle) is a VLTI image by MIDI at wavelength 8.7 µm, penetrating the dust cloud and showing the central structures in great detail. Image c (right) is a sketch of the dust structure of the innermost region. It contains a central hot component (at least 500°C; yellow), marginally resolved by the VLTI observations in the North-South direction (i.e. in the vertical direction in this image). It is surrounded by a larger warm component (~50°, red) that is well resolved. The arrows at the upper left indicate the directions of the two VLTI baselines and the corresponding resolution (image sharpness) at the central observed wavelength (10.5 µm). Image: ESO

The galaxy’s inner disk surrounding the active nucleus is home to emission nebulae with significant expansion velocities. Regions of intense star forming activity, some of the brightest ones known, have been detected in an inner bar. They may be the most luminous starburst regions within 100 million light years of our solar system.

Messier 77 is receding from us at 1,137 kms. The galaxy’s redshift was measured by the American astronomer Vesto M. Slipher of Lowell Observatory in Flagstaff, Arizona in 1914. Cetus A was the second galaxy with a known large redshift, after Messier 104, the famous Sombrero Galaxy. 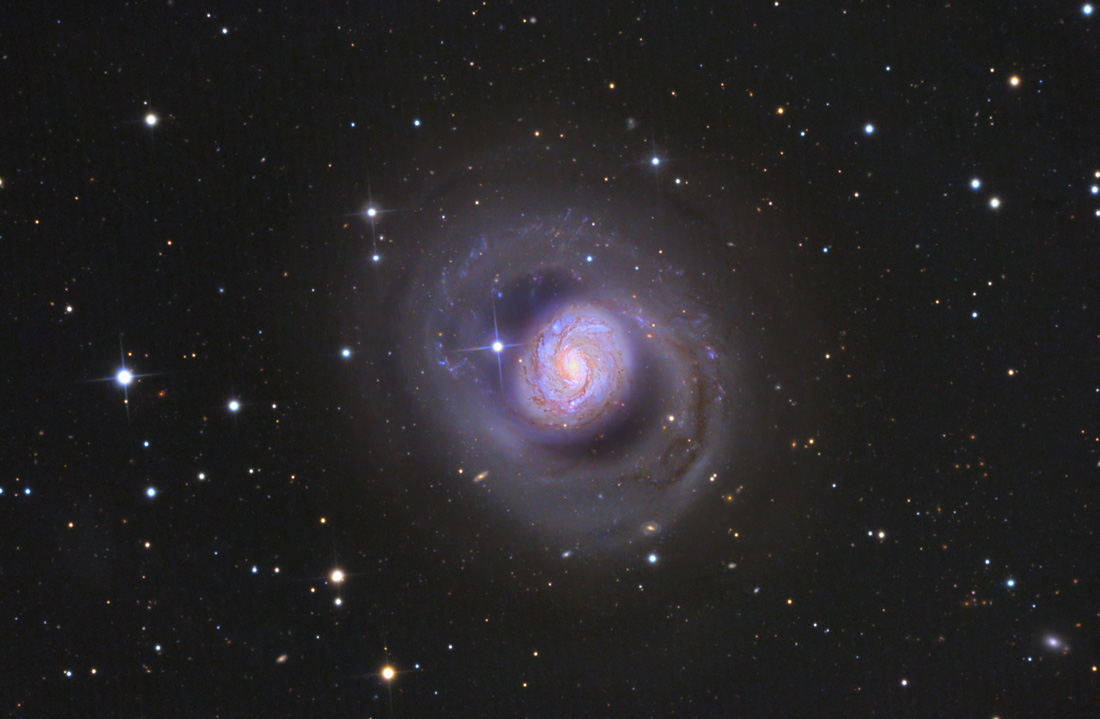 The edge-on galaxy NGC 1055 is another prominent member of the M77 Group. Located about 0.5 degrees north-northwest of M77, the galaxy occupies an area of about 3 arc minutes and has a visual magnitude of 11.4. NGC 1073, situated about 1 degree to the north-northeast of M77, appears face-on and has an apparent size of 5 arc minutes. 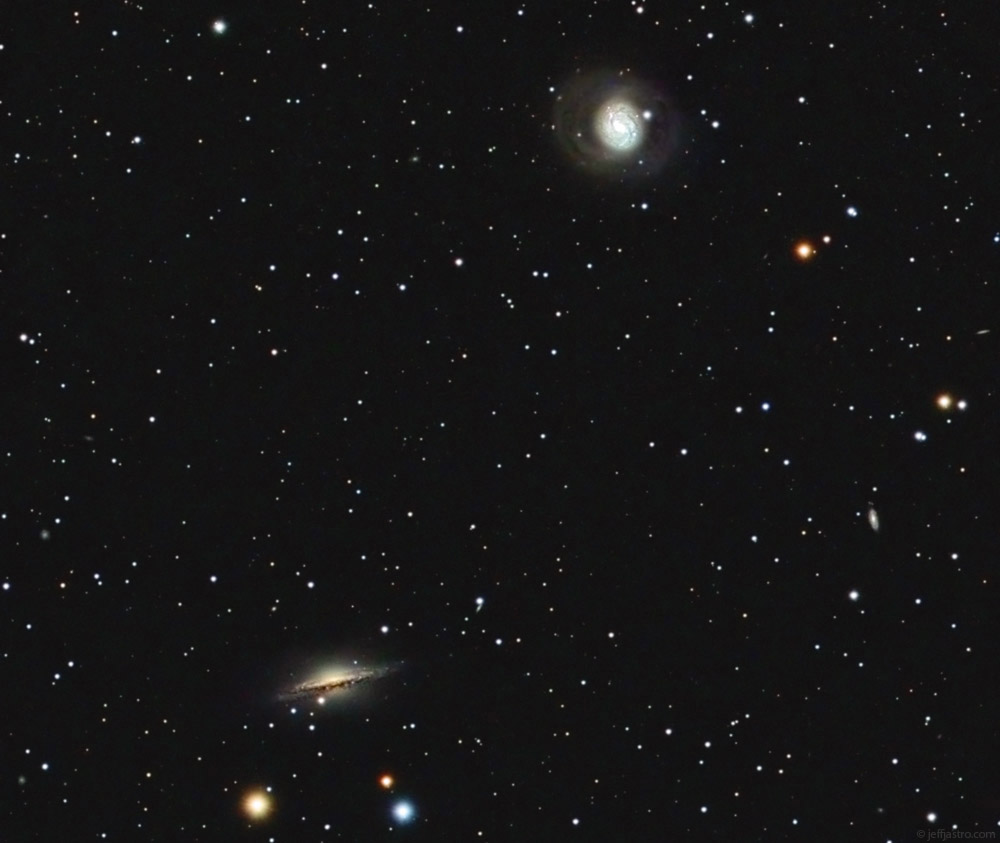 Messier 77 was discovered by the French astronomer Pierre Méchain on October 29, 1780. Méchain described the object as a nebula.

Charles Messier added M77 to his catalogue on December 17, 1780, describing it as a star cluster with some nebulosity. He noted, “Cluster of small stars, which contains some nebulosity, in Cetus & on the parallel of the star Delta, reported of the third magnitude, & which M. Messier estimated to be hardly of the fifth. M. Méchain saw this cluster on October 29, 1780 in the form of a nebula.”

Like Messier, William Herschel believed the object to be a cluster, but his description of it changed several times over several decades. After seeing it in a 7-foot telescope in 1783, he described M77 as an “ill defined star, surrounded by nebulosity.” Between 1801 and 1810, he observed it in his 10-foot instrument and noted that it had “almost the appearance of a large stellar nebula.” In the same period, he observed the galaxy in his large 10-foot telescope and noted, “A kind of much magnified stellar cluster; it contains some bright stars in the centre. With 171 its diameter is 1′ 17″; with 220 it is 1′ 36″.” 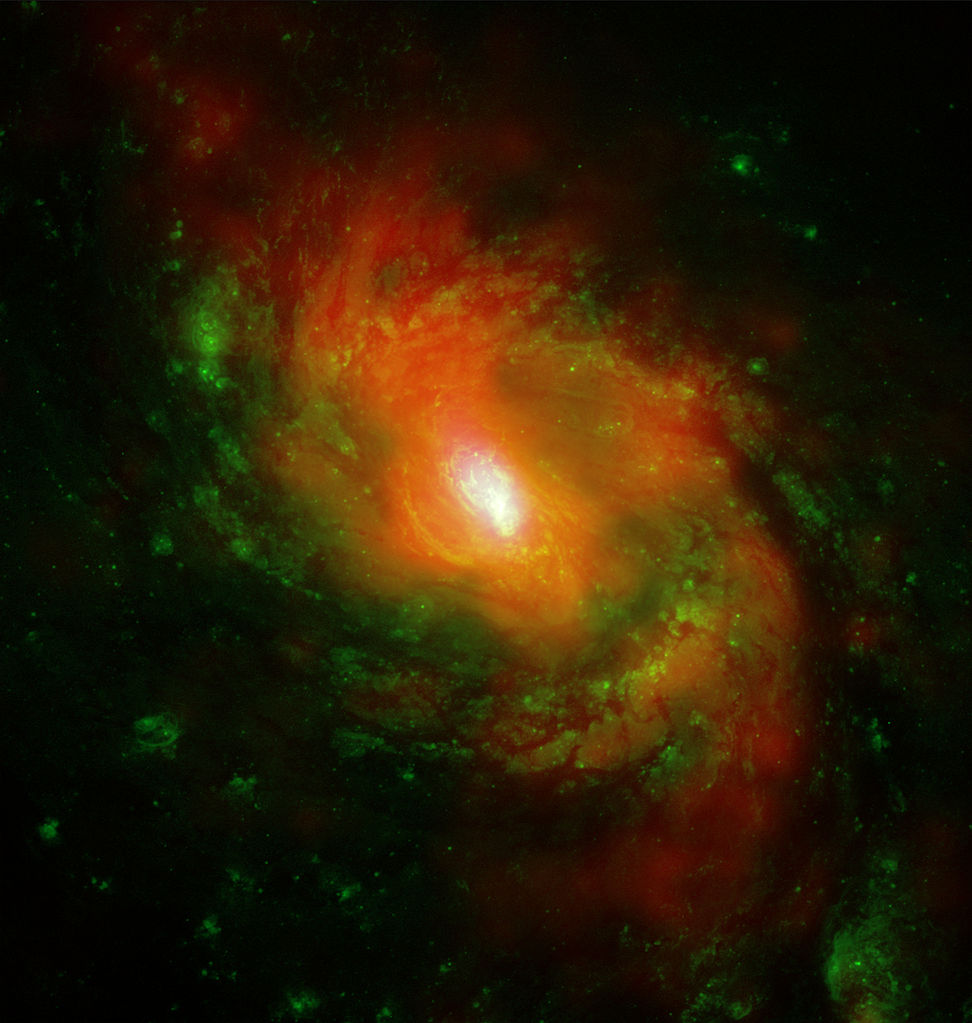 X-ray and Optical Image of NGC 1068 – This image shows a multiwavelength view of NGC 1068 (also known as Messier 77), one of the nearest and brightest galaxies containing a rapidly growing supermassive black hole. X-ray data from the Chandra X-ray Observatory are shown in red while optical data from the Hubble Space Telescope is in green. The spiral structure of NGC 1068 is shown by this data. NGC 1068 is located about 50 million light years from Earth and contains a supermassive black hole about twice as massive as the one in the middle of the Milky Way Galaxy. Image – X-ray (NASA/CXC/MIT/C.Canizares, D.Evans et al), Optical (NASA/STScI); composited by Huntster at wikipedia.org

John Herschel catalogued M77 as h 262 and later added it to the General Catalogue as GC 600. He described the object as “very bright, pretty large, irregularly round, suddenly brighter toward the middle where there is a nucleus which is partially resolved/some stars seen near the nucleus; a star at position angle 130 deg, 2′ distance. ”

A round stellar nebula, near Delta in the Whale‘s lower jaw, and about 2 1/2 deg from Gamma on the line towards Epsilon, or s. by w. This was first classed by M. [Messier] in 1780 as a mass of stars containing nebulosity. It is small, bright, and exactly in a line with three small stars, one preceding and two following, of which the nearest and largest is a 9th-magnitude to the sf [south following, SE]. There are other minute companions in the field; and the place is differentiated from Gamma Ceti.

This object is wonderfully distant and insulated, with presumptive evidence of intrinsic density in its aggregation; and bearing indication of the existence of a central force, residing either in a central body or in the centre of gravity of the whole system. Sir William Herschel, after repeatedly examining it, says, – “From the observations of the large ten-feet telescope, which has a gauging power of 75.82, we may conclude that the profundity of the nearest part is at least of the 910th order.” That is, the 910 times as far off as the stars of the first magnitude! 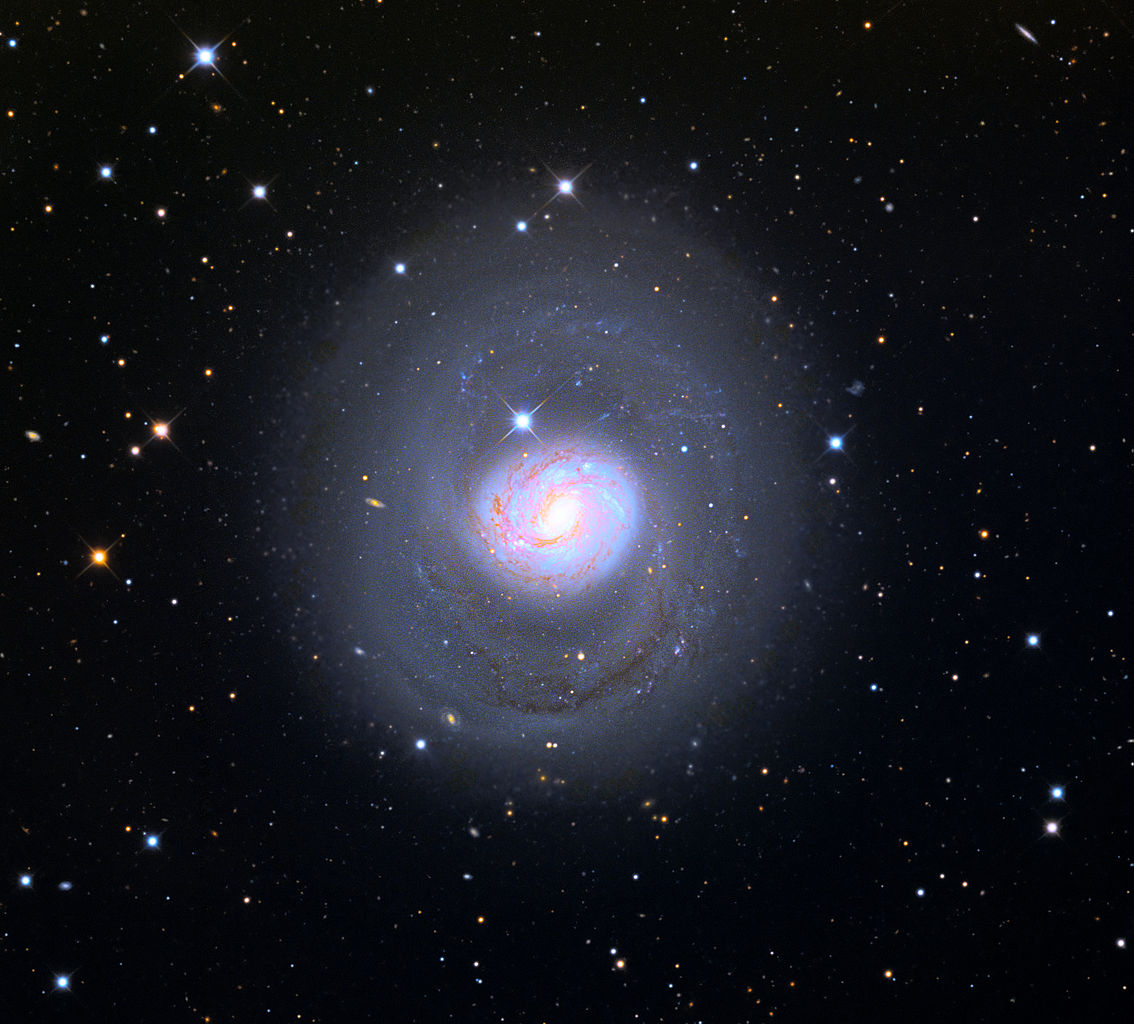 American astronomer Halton Arp included M77 in his Atlas of Peculiar Galaxies as the entry number 37, describing it as a “Spiral with a Low Surface Brightness Companion On Arm.” 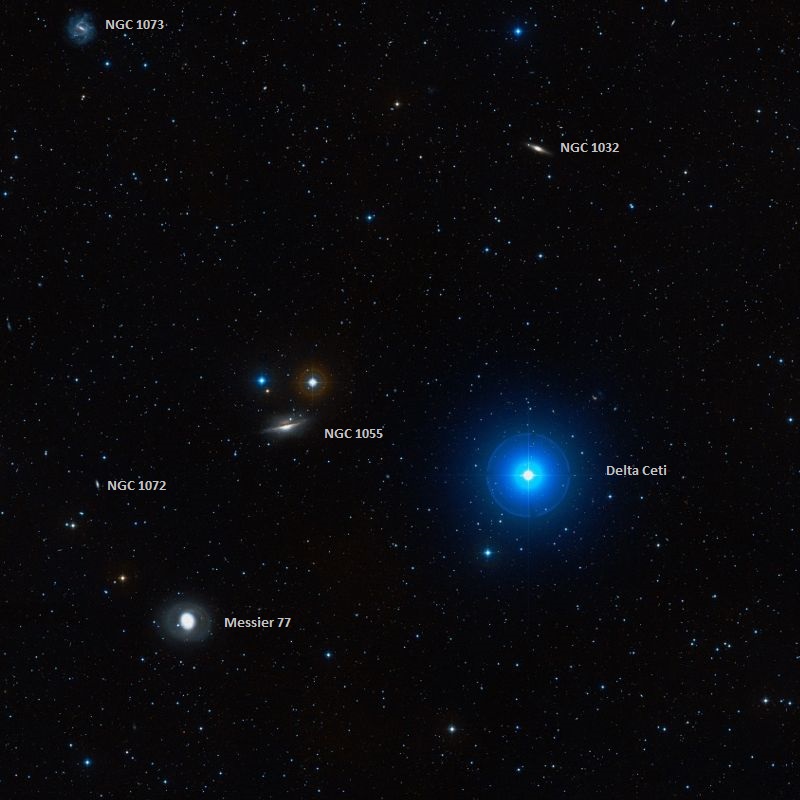 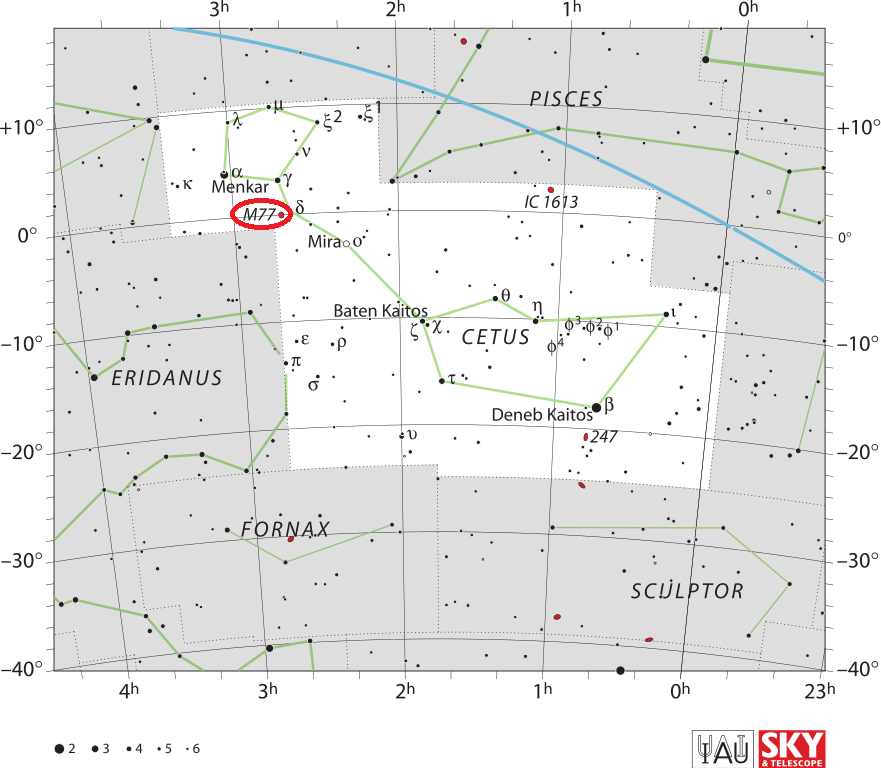