Messier 102 (M102), also known as the Spindle Galaxy, is an edge-on lenticular galaxy located in the northern constellation Draco. The galaxy lies at a distance of 50 million light years from Earth and has an apparent magnitude of 10.7. It has the designation NGC 5866 in the New General Catalogue.

The Spindle Galaxy occupies an area of 4.7 by 1.9 arc minutes of apparent sky, corresponding to a linear extension of about 60,000 light years. It is very difficult to see with binoculars, but easily visible in small telescopes, which show a thin, nebulous patch under good conditions. 4-inch telescopes show a bright elliptical nebulous patch with a brighter core, while 6-inch and 8-inch instruments reveal a halo of light and hints of the galaxy’s dark dust lane. Larger telescopes show the galaxy’s well-defined bright centre and more details of its structure.

The Spindle Galaxy can be found east of the Big Dipper, in the southern part of Draco. It is located 4 degrees southwest of the magnitude 3.3 red giant star Iota Draconis, in the direction of Alkaid, Eta Ursae Majoris, the star that marks the tip of the Big Dipper‘s handle. The best time of year to observe M102 is during the spring. Observers north of latitude 35N can see the galaxy throughout the year as it is circumpolar and never sets below the horizon. 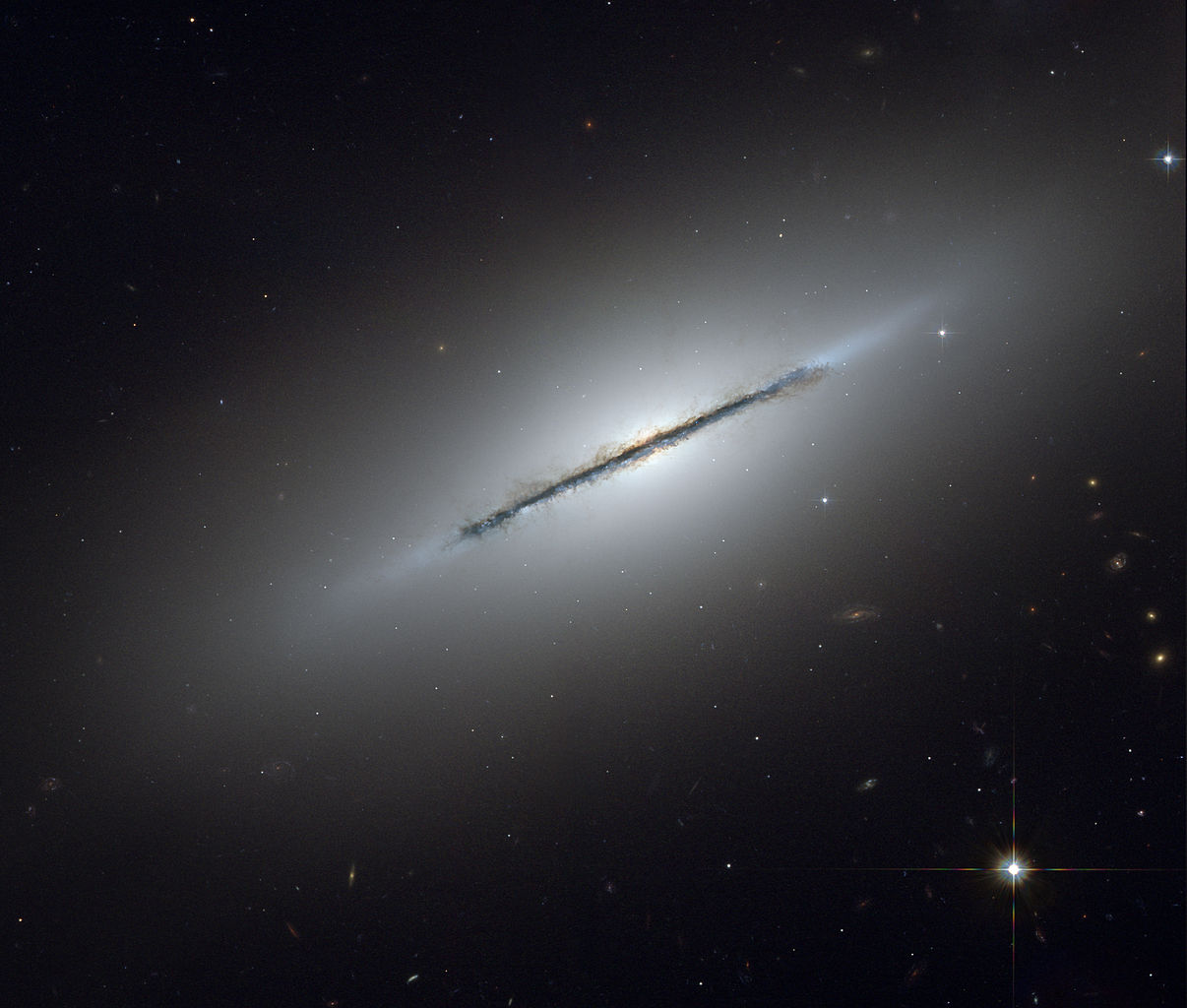 This is a unique view of the disk galaxy NGC 5866 tilted nearly edge-on to our line-of-sight. Hubble’s sharp vision reveals a crisp dust lane dividing the galaxy into two halves. The image highlights the galaxy’s structure: a subtle, reddish bulge surrounding a bright nucleus, a blue disk of stars running parallel to the dust lane, and a transparent outer halo. NGC 5866 is a disk galaxy of type “S0” (pronounced s-zero). Viewed face on, it would look like a smooth, flat disk with little spiral structure. It remains in the spiral category because of the flatness of the main disk of stars as opposed to the more spherically rotund (or ellipsoidal) class of galaxies called “ellipticals.” Such S0 galaxies, with disks like spirals and large bulges like ellipticals, are called ‘lenticular’ galaxies. NGC 5866 lies in the Northern constellation Draco, at a distance of 44 million light-years. It has a diameter of roughly 60,000 light-years only two-thirds the diameter of the Milky Way, although its mass is similar to our galaxy. This Hubble image of NGC 5866 is a combination of blue, green and red observations taken with the Advanced Camera for Surveys in February 2006. Image: NASA, ESA, and The Hubble Heritage Team (STScI/AURA)

The Spindle Galaxy is estimated to contain 100 billion stars. It has a prominent extended central dust disk that appears almost exactly edge-on when seen from Earth. The dust disk is very unusual for a galaxy of this type. Lenticular galaxies typically have dust only near the central region and the dust follows the light profile of the galactic bulges.

The dust disk in M102 may contain a ring structure, but the shape of the structure is difficult to determine because the galaxy is seen edge-on. The galaxy may have been misidentified as a lenticular galaxy and may in fact be a spiral, which would make the dust disk far less unusual.

Messier 102 is receding from us at 672 km/s. The galaxy’s central dust lane appears slightly warped, indicating that M102 may have interacted with another galaxy in the distant past.

NGC 5866 is one of the two galaxies known as the Spindle Galaxy. The other, NGC 3115, is an edge-on lenticular galaxy located in the constellation Serpens.

The Spindle Galaxy was most likely discovered either by Pierre Méchain or Charles Messier in 1781. Méchain documented M102 in late March or early April, 1781, describing the object as a “nebula between the stars Omicron Boötis & Iota Draconis,” adding that “it is very faint; near it is a star of the sixth magnitude.” Méchain probably meant Theta Boötis, not Omicron, which contributed to the confusion around the identity of M102. Omicron Boötis is more than 40 degrees away from Iota Draconis, which makes the possibility of an error very likely.

Méchain reported the discovery to Messier, who added the object to his catalogue without providing a position. Messier later gave a handwritten position for M102 in his personal copy.

The Spindle Galaxy was independently discovered by William Herschel in 1788. Herschel determined the position of the object on May 5, 1788 and catalogued it as H I.215, describing it as “very bright. Considerably large. Extended. Following [east of] 2 stars.”

John Herschel catalogued the object as h 1909, but made a mistake in referring to it as William Herschel’s H I.219 instead of H 1.215. He described it as “very bright; pretty much elongated; gradually brighter toward the middle; 50″ long, 20″ broad; extended along position angle 326 [= 146] by micrometer.”

Herschel later corrected the error and included the object in his General Catalogue as GC 4058.

A very bright resolvable nebula, but none of the component stars to be seen distinctly even with a power of a thousand. A perfectly straight line and longitudinal division in the direction of the major axis. Resolvability most strongly indicated toward the nucleus.

French astronomer Camille Flammarion identified NGC 5866 as M102 in his “List of the Messier Objects,” published in L’Astronomie in November 1917, arguing that the Greek letter Omicron (ο), written down by Messier, was in fact a lowercase Theta (θ). This was probably correct because the object found at this location corresponds to Messier’s description of M102.

Harlow Shapley and Helen Davies commented on the identification of M102 in 1917, pointing out the following:

By a star chart, or the sky, you will see that, taken as it stands, no object could be well selected for M102, since Omicron Boötis is too far from Iota Draconis. If, however, Omicron is a misprint for Theta, it becomes intelligible, and M102 is perhaps N.G.C. 5866, altho in Norton’s Atlas it is apparently identified as N.G.C. 5979. On our photographs, however, N.G.C. 5866 appears to be the brightest object in this region.”

Heber Curtis photographed M102 with the Crossley telescope at the Lick Observatory and noted:

Very bright, 3’x1′ in p.a. 125deg. No spiral structure is discernible, but it appears to be a spiral of the Andromeda type seen edgewise. Its most striking feature is a narrow, clear-cut dark lane along the middle, marking a slight angle with the major axis.

The Spindle Galaxy is an object that closely matches both the position given by Charles Messier and the description provided by Pierre Méchain, who discovered M102. However, in a letter written to J. Bernoulli on May 6, 1783, Méchain stated that M102 was a duplicate observation of the Pinwheel Galaxy (M101) in Ursa Major, and for this reason the Spindle Galaxy has not been conclusively identified as M102. Méchain wrote, “I will add only that No. 101 & 102 on the p. 267 of the Connoissance des temps 1784 are nothing but the same nebula, which has been taken for two, by an error in the charts.”

However, NGC 5866 was most likely the object that Messier observed when he determined the position for M102. It is almost exactly 5 degrees west of the position given for M102, which is probably a result of a data reduction error. 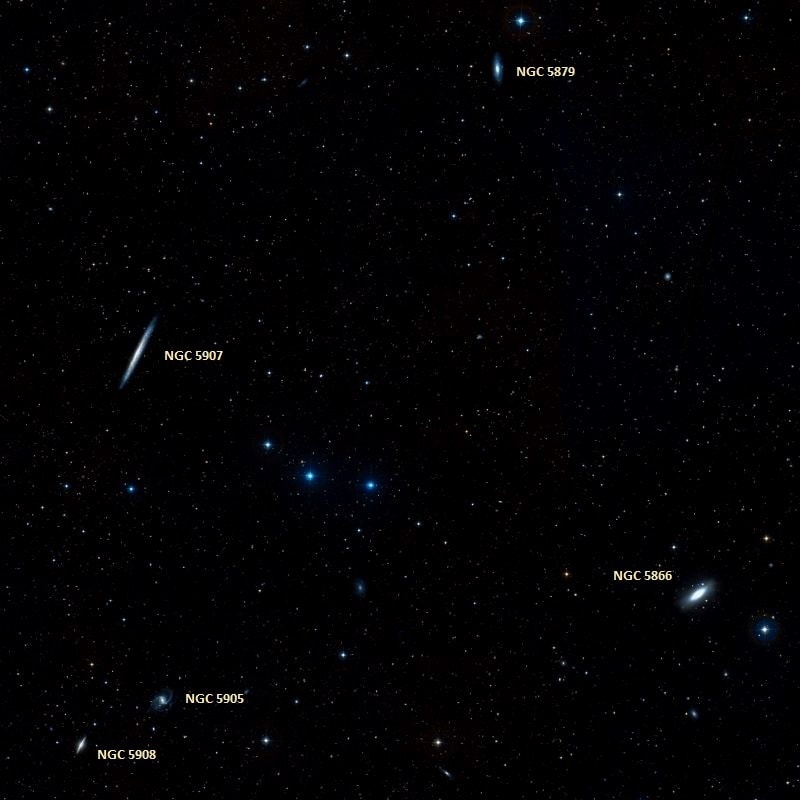 NGC 5928, a 14th magnitude galaxy located in Serpens constellation, between the stars ο Boötis and ι Serpentis, was proposed as a candidate for M102 by John Louis Emil Dreyer, the Danish-Irish astronomer who compiled the New General Catalogue based on William Herschel’s catalogue. Dreyer based his suggestion on the possibility that ι Serpentis may have been misidentified as ι Draconis in the position given for M102. He wrote:

However, NGC 5928 is not a likely candidate because it may not even have been observable by Méchain and Messier. 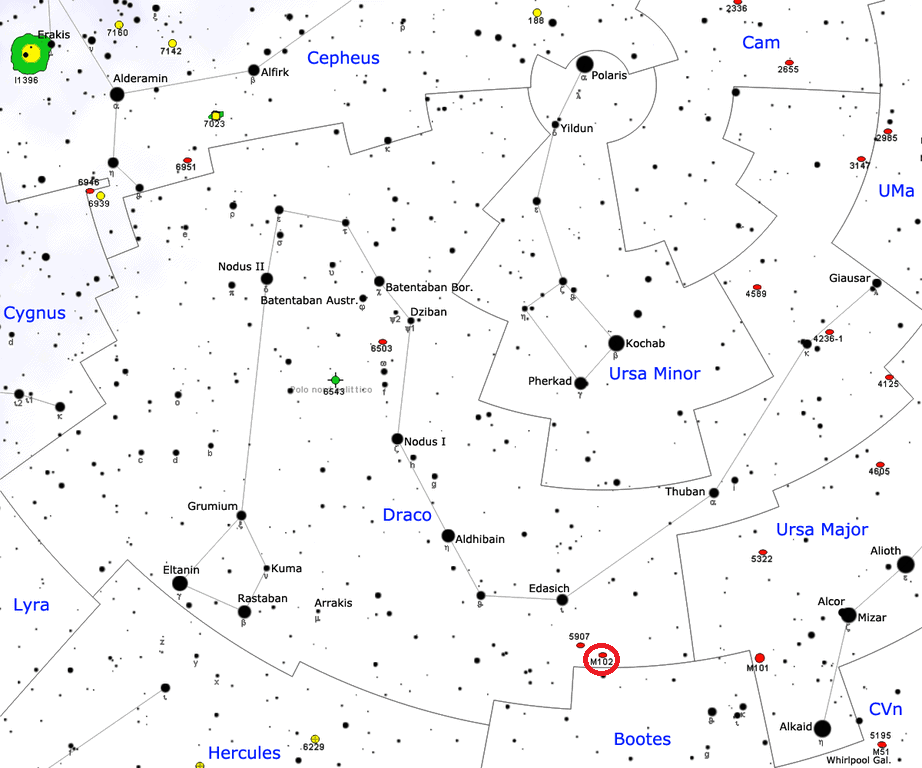