Messier 72 (M72) is a globular star cluster located in the constellation Aquarius, the Water Bearer. The cluster has an apparent magnitude of 9.35 and lies at a distance of 54,570 light years from Earth. It has the designation NGC 6981 in the New General Catalogue.

In small telescopes, M72 appears as a faint nebula and it takes a medium-sized instrument to resolve the stars in the surrounding field. Larger telescopes will reveal a cluster with an apparent diameter of 2.5 arc minutes. The full angular diameter of M72 is 6.6 arc minutes, corresponding to a spatial extension of 106 light years.

12-inch telescopes will resolve the cluster’s core region, which occupies 1.25 arc minutes of apparent sky. The core of M72 has 2.26 times the Sun’s luminosity per cubic parsec.

Messier 72 can be found in the western part of Aquarius, near the asterism that Charles Messier listed in his catalogue as Messier 73. M72 lies a few degrees below the imaginary line drawn from Sadalmelik to Sadalsuud, two brightest stars in the constellation, in the direction of Dabih, the second brightest star in Capricornus. The cluster can also be located about 3 degrees south and 1.5 degrees east of the magnitude 3.77 star star Albali, Epsilon Aquarii. The best time of year to observe M72 is during the summer. 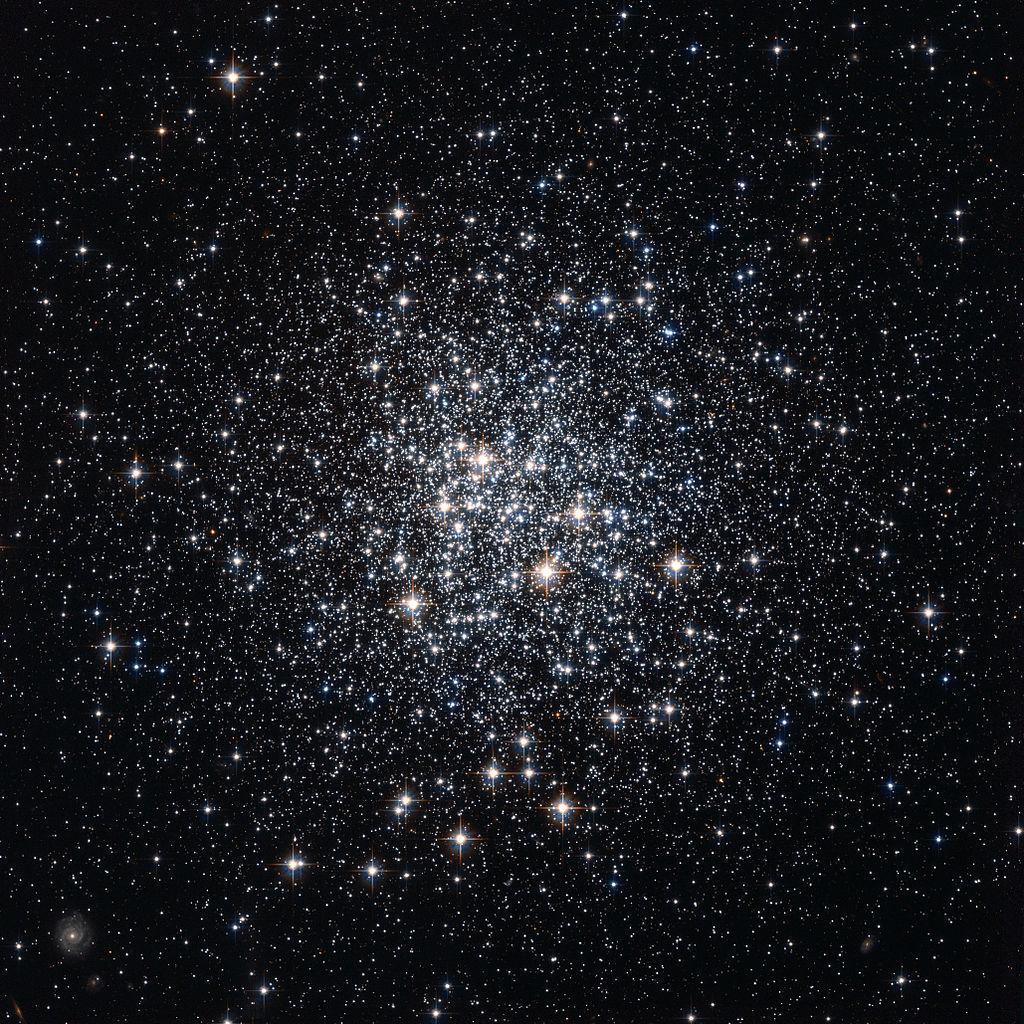 This rich collection of scattered stars, known as Messier 72, looks like a city seen from an airplane window at night, as small glints of light from suburban homes dot the outskirts of the bright city centre. Messier 72 is actually a globular cluster, an ancient spherical collection of old stars packed much closer together at its centre, like buildings in the heart of a city compared to less urban areas. As well as huge numbers of stars in the cluster itself the picture also captures the images of many much more distant galaxies seen between and around the cluster stars.
French astronomer Pierre Méchain discovered this rich cluster in August of 1780, but we take Messier 72’s most common name from Méchain’s colleague Charles Messier, who recorded it as the 72nd entry in his famous catalogue of comet-like objects just two months later. This globular cluster lies in the constellation of Aquarius (the Water Bearer) about 50 000 light-years from Earth.
This striking image was taken with the Wide Field Channel of the Advanced Camera for Surveys on the NASA/ESA Hubble Space Telescope. The image was created from pictures taken through yellow and near-infrared filters (F606W and F814W). The exposure times were about ten minutes per filter and the field of view is about 3.4 arcminutes across. Image: ESA/Hubble & NASA

Messier 72 has an estimated mass of about 168,000 solar masses and is believed to be about 9.5 billion years old. It contains 43 known variable stars, most of them of the RR Lyrae type.  M72 is one of the smallest, faintest and most remote clusters listed in Messier’s catalogue, roughly twice as far away from us as the galactic centre, but it is also one of the most intrinsically luminous Messier clusters. M72 is approaching us at 255 km/s.

With a density classification of IX, the cluster does not have strong central concentration. Only five globulars in the Messier catalogue are less concentrated than M72: M55 (density class XI), M56 (X), M68 (X), M71 (X-XI), and M107 (X).

Messier 72 was discovered by Charles Messier’s colleague Pierre Méchain on August 29, 1780. Messier found the object on October 4 together with Messier 73, which lies about 1.5 degrees to the east. He added them both to his catalogue, describing M72 as a faint nebula. He noted:

Nebula seen by M. Méchain in the night of August 29-30, 1780, above the neck of Capricorn. M. Messier looked for it on the 4th and 5th October following: the light is as faint as for the preceding [Messier 71]; near it is a small telescopic star: the position was determined from the star Nu Aquarii, of fifth magnitude.’ (diam 2′) 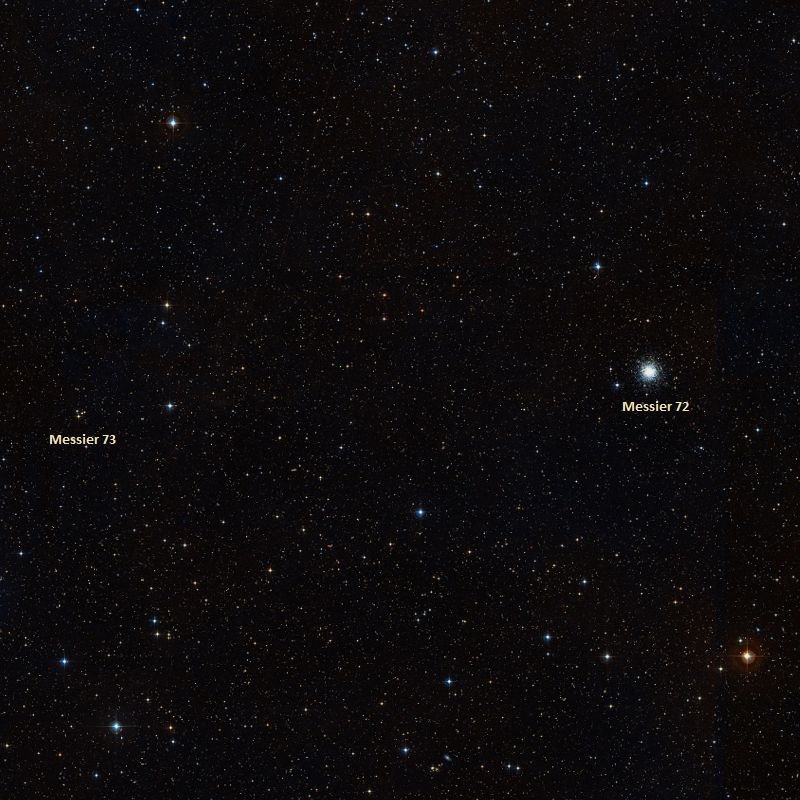 William Herschel was the first to resolve the cluster into stars in 1783. He wrote:

Having been about 20 minutes at the telescope to prepare the eye properly for seeing critical objects, the 72nd of the Connois. came into the field. It is a very bright object. It is a cluster of stars of a round figure, but the very faint stars on the outside of these sorts of clusters are generally a little dispersed so as to deviate from a very perfect circular form; the telescopes which have the greatest light show this best. It is very gradually extremely condensed in the center, but with much attention even there the stars may be distinguished. Power 280. There are many stars in the field of view with it, but they are of many magnitudes and totally different from the excessively small ones which compose the cluster. It is not possible to form an idea of the number of stars that may be in such a cluster, but I think we cannot estimate them by hundreds. The diameter is about 1/5 of the field = 1′ 53.6″. – 10 feet telescope. I viewed the same object. The contrast is very striking, it appears eF [extremely faint].

John Herschel observed M72 with a larger telescope and described it as a bright “cluster of stars of a round figure.” He catalogued the object as h 2090 and later added it to the General Catalogue as GC 4608, describing it as a “globular cluster; pretty bright; pretty large; round; gradually much compressed toward the middle, well resolved.”

A globular cluster of minute stars between Aquarius and the neck of Capricorn; being 9 deg due east of Alpha Capricorni, where it follows, at about half a degree, 325 P. XX, a star of the 6 1/2 magnitude [from Piazzi’s catalog]. There are many telescopic stars in the field, a small pair of which closely follows the cluster. This object was discovered by the astronomical ferret M. Messier in 1780, and registered as a nebula: three years afterwards WH resolved it into stars, with his 20-foot [FL] reflector; and on gauging, he pronounced its profundity to be of the 243rd order.

American astronomer Harlow Shapley observed the cluster and noted a similarity to two other Messier objects: Messier 4 and Messier 12. 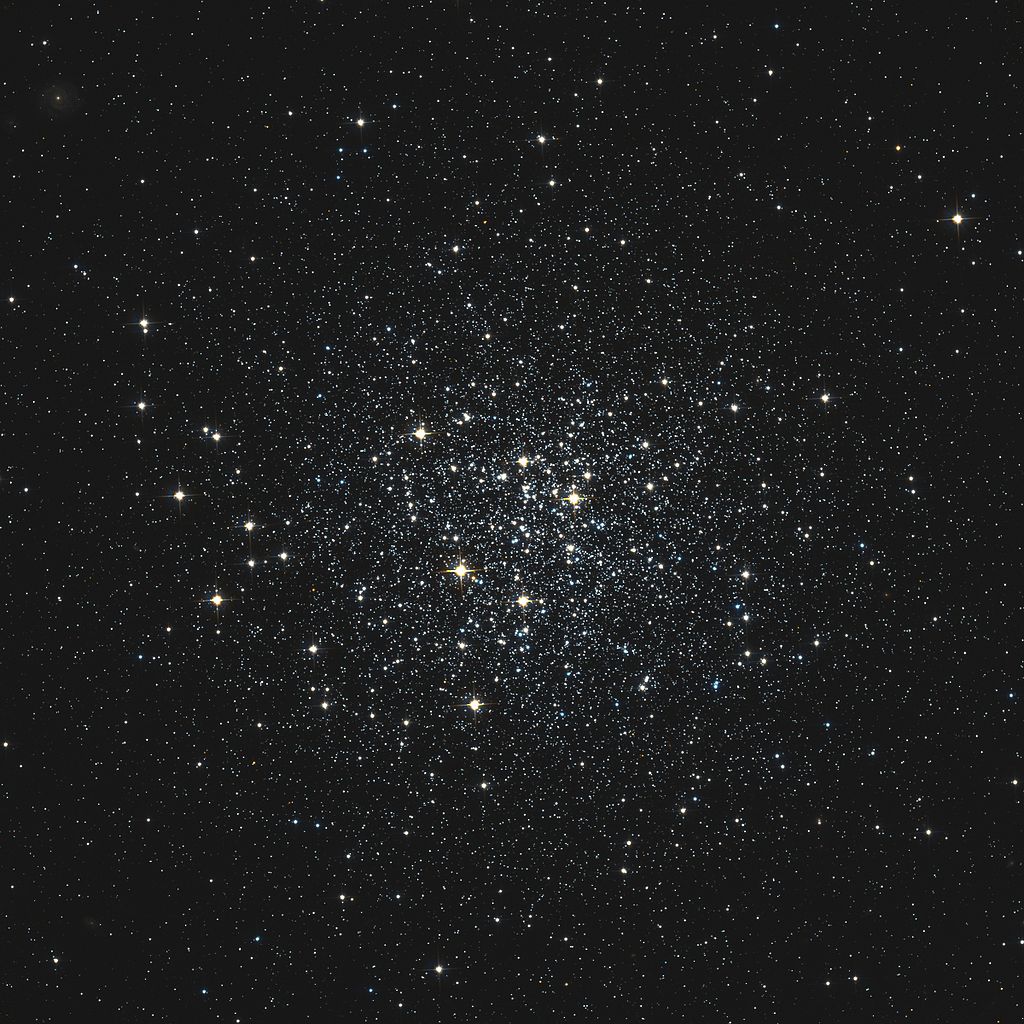 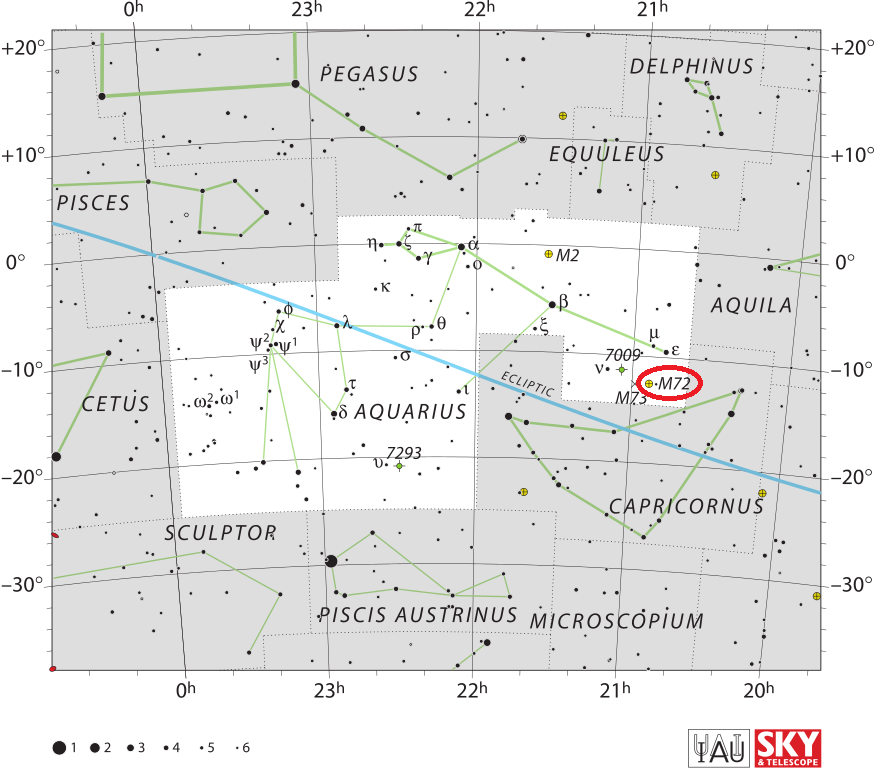