Messier 12 (M12), also known as the Gumball Globular, is a globular star cluster located in the constellation Ophiuchus. The Gumball Globular has an apparent magnitude of 7.68 and lies at a distance of 15,700 light years from Earth. It has the designation NGC 6218 in the New General Catalogue.

Messier 12 is invisible to the naked eye, but can be seen with binoculars in good conditions, with clear dark skies and no light pollution. Stars in the cluster can be resolved with an 8-inch or larger telescope. A 10-inch instrument reveals the core with a diameter of 3 arc minutes and a halo of stars stretching across an area of 10 arc minutes.

The Gumball Globular appears as a fuzzy ball of light in a small 3-inch telescope, while 8-inch instruments reveal the cluster’s brightest stars. Larger telescopes show stars across the entire area of the cluster. 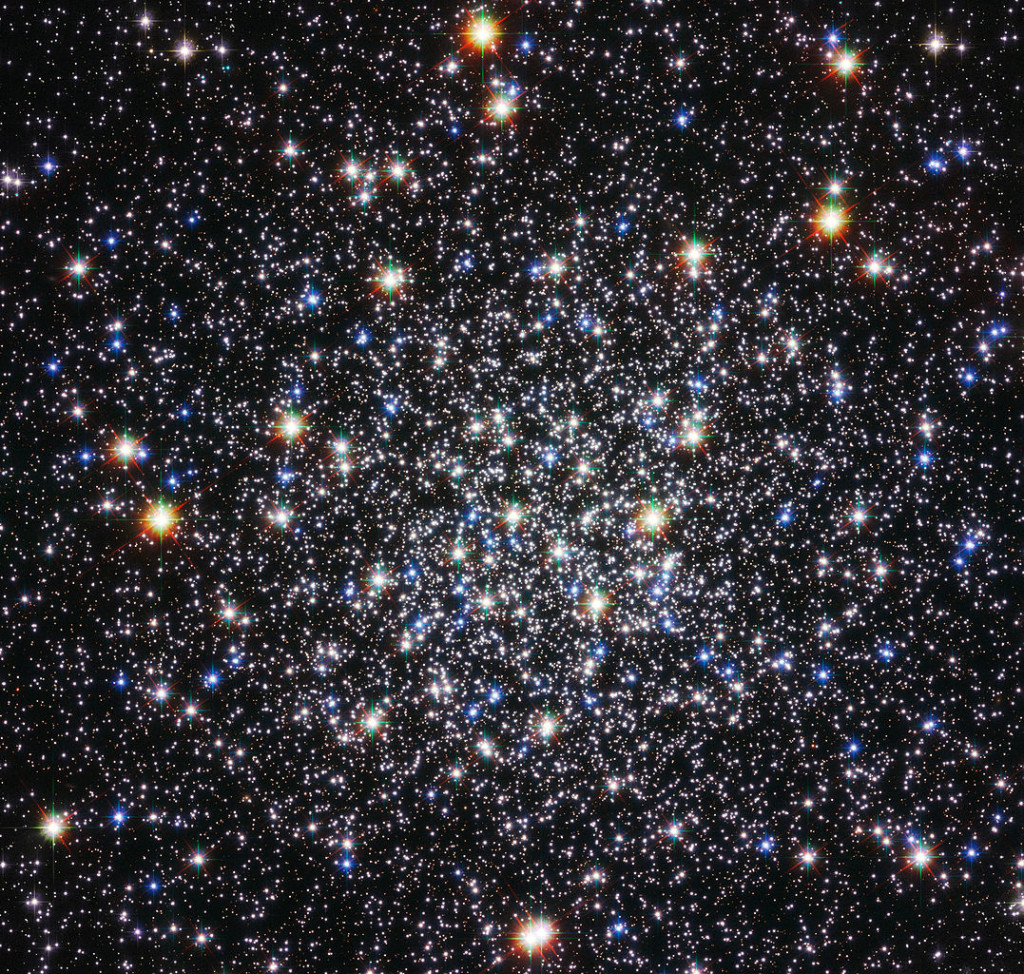 The high concentration of stars within globular clusters, like Messier 12, shown here in an image from the NASA/ESA Hubble Space Telescope, makes them beautiful photographic targets. But the cramped living quarters in these clusters also makes them home to exotic binary star systems where two stars are locked in tight orbits around each other and matter from one is gobbled up by its companion, releasing X-rays. It is thought that such X-ray binaries form from very close encounters between stars in crowded regions, such as globular clusters, and even though Messier 12 is fairly diffuse by globular cluster standards, such X-ray sources have been spotted there. Astronomers have also discovered that Messier 12 is home to far fewer low-mass stars than was previously expected. In a recent study, astronomers used the European Southern Observatory’s Very Large Telescope at Cerro Paranal, Chile, to measure the brightness and colours of more than 16 000 of the globular’s 200 000 stars. They speculate that nearly one million low-mass stars have been ripped away from Messier 12 as the globular has passed through the densest regions of the Milky Way during its orbit around the galactic centre. It seems that the serenity of this view of Messier 12 is misleading and the object has had a violent and disturbed past.
Messier 12 lies about 23 000 light-years away in the constellation of Ophiuchus (The Serpent Bearer). This image was taken using the Wide Field Channel of Hubble’s Advanced Camera for Surveys. The colour image was created from exposures through a blue filter (F435W, coloured blue), a red filter (F625W, coloured green) and a filter that passes near-infrared light (F814W coloured red). The total exposure times were 1360 s, 200 s and 364 s, respectively. The field of view is about 3.2 x 3.1 arcminutes. Image: ESA/Hubble & NASA

Messier 12 has a Shapley-Sawyer classification of IX, which means that its member stars are concentrated relatively loosely toward the centre for a globular cluster. Compared to its neighbour Messier 10 (class VII), M12 is notably less dense toward the central region.

The cluster was discovered by Charles Messier on May 30, 1764. Messier added the object to his catalogue, describing it as a “nebula without stars.” His entry read, “Nebula discovered in the Serpent, between the arm and the left side of Ophiuchus: this nebula contains no star, it is round & its light is faint; near this nebula there is a star of 9th magnitude.” (Serpens constellation, which Messier mentions in his entry, is divided into two parts: Serpens Caput and Serpens Cauda, representing the head and tail of the snake. Ophiuchus, also known as Serpentarius, represents Asclepius in Greek mythology and is the celestial figure holding the serpent, standing between the two parts of Serpens constellation.) 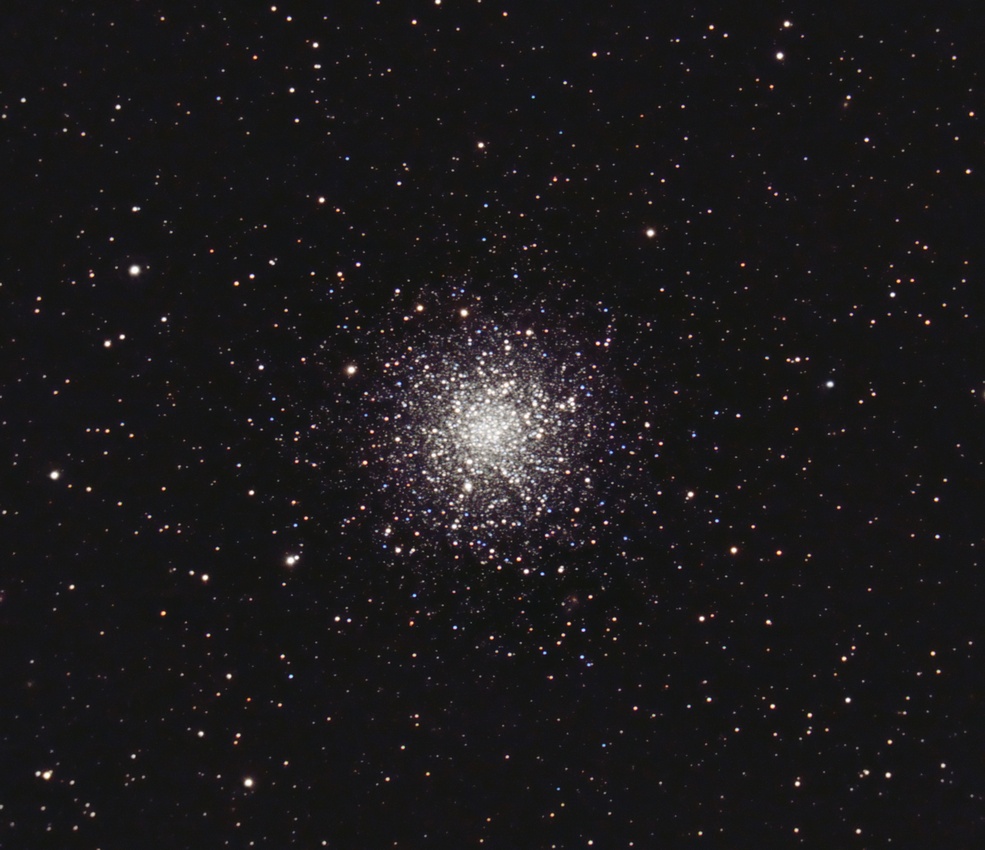 Messier provided a slightly more detailed observation of the cluster in 1771:

In the same night of [May] 30 to 31, 1764, I have discovered a nebula in Serpens, between the arm & left side of Ophiuchus, according to the charts of Flamsteed: That nebula doesn’t contain any star; it is round, its diameter can be 3 minutes of arc, its light is faint; on sees it very well with an ordinary [non-achromatic] refractor of 3 feet [FL]. I have determined its position, by comparing with the star Delta Ophiuchi; its right ascension has been concluded at 248d 42′ 10″, & its declination at 1d 30′ 28″ south. I have marked it in the chart of the apparent path of the Comet which I have observed last year [the comet of 1769].

German astronomer Johann Elert Bode observed the cluster in 1774 and also described it as a nebula: 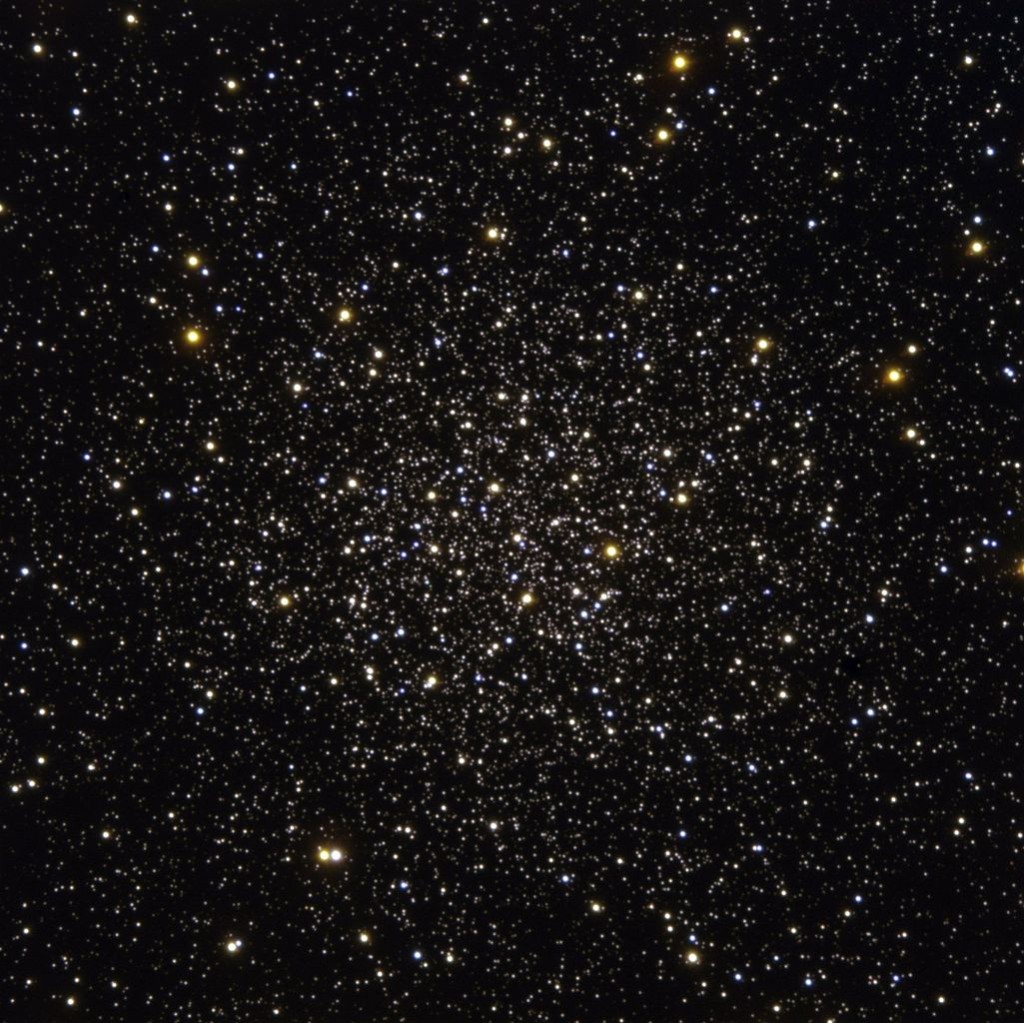 Centre of the globular cluster Messier 12 as observed with the FORS-1 multi-mode instrument on ESO’s Very Large Telescope (Cerro Paranal, Chile). The picture covers a region of about 3.5 arcmin on a side, corresponding to about 23 light years at the distance of Messier 12. It is based on data in five different filters: U, B, V, R and H-alpha. Here only the short exposures were used while for their scientific analysis, the authors used much longer exposures. Guido De Marchi (ESA) reduced the data and Kristina Boneva and Haennes Heyer (ESO) did the final image processing. The observations were obtained with very good conditions, the image quality (‘seeing’) being around 0.6 arcsec. Image: ESO

William Herschel was the first to resolve the cluster into individual stars. He noted, “1783, 1799, 10 feet telescope. With 120, and an aperture of 4 inches, easily resolvable; with 5 inches, stars become visible; with 6 inches, pretty distinctly visible; and with all open, the lowest power shows the stars.”

A fine rich globular cluster, between the right hip and the elbow of Ophiuchus, with a cortège of bright stars, and many minute straggling outliers. This resolvable mass is greatly condensed towards the centre, with several very bright spots; it was discovered by Messier in 1764, but, probably from the imperfection of his means, was registered as “a round nebula, unaccompanied by any star.” Its place was obtained by differentiating with Epsilon Ophiuchi, from which it is 8deg 1/2 distant, on a north-west-by-west line, leading nearly upon Beta.

Sir William Herschel resolved this object in 1783; and in the folowing year his 20-foot reflector made it “a brilliant cluster, 7′ or 8′ in diameter; the most compressed parts about 2′.” By the gauging process, he held its profundity to be of the 186th order.

The Gumball Globular contains about 200,000 stars. The brightest ones are of 12th magnitude and the mean visual magnitude of the 25 brightest stars in M12 is 13.97. American astronomer Allan Sandage found 13 variable stars in the cluster.

In 2006, M12 was discovered to contain a surprisingly low number of low mass stars. Scientists believe that these stars were stripped from M12 by the gravitational pull of the Milky Way Galaxy and that the cluster lost four times as many members as it still has over its lifetime. In other words, as the cluster’s orbit took it through the denser regions of the Milky Way plane, M12 ejected about a million stars into the galaxy’s halo. This explains why there are hardly any M-class (red) dwarfs in the cluster. It will take another 4.5 billion years before M12 dissociates completely.

Messier 12 is best seen in the months of May, June and July. 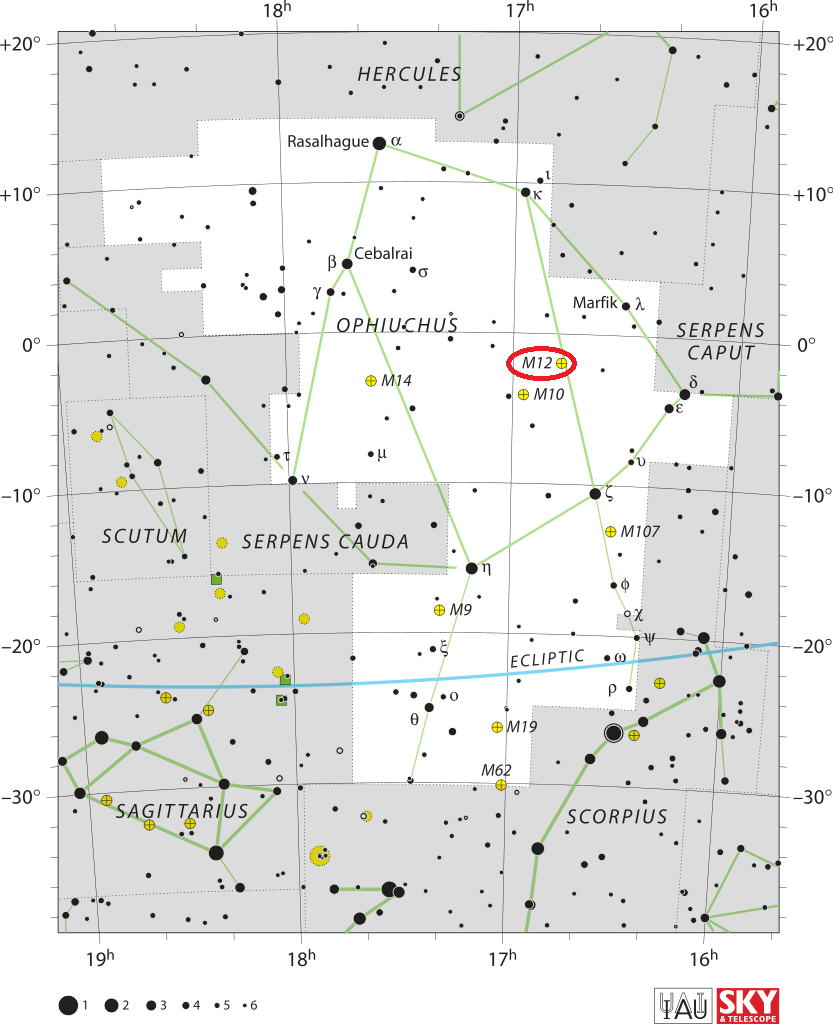