Messier 14 (M14) is a globular cluster located in the southern constellation Ophiuchus. The cluster lies at a distance of 30,300 light years from Earth and has an apparent magnitude of 7.6. It has the designation NGC 6402 in the New General Catalogue.

Messier 14 is elongated in shape and contains about 150,000 stars. It occupies an area about 100 light years across in size. M14 can easily be seen in binoculars, but is not visible to the naked eye. The brightest star in the cluster has a visual magnitude of 14 and the average apparent magnitude of the cluster’s 25 brightest stars is 15.44.

The cluster has only about 5 percent of the Sun’s heavy elements. Its estimated age is about 13 billion years.

Messier 14 is a class VIII globular cluster, which means that its stars are not particularly densely concentrated in the central region. The cluster’s bright main portion spans only 3 arc minutes in angular diameter, but the outermost regions give M14 a total angular diameter of 11.7 arc minutes. 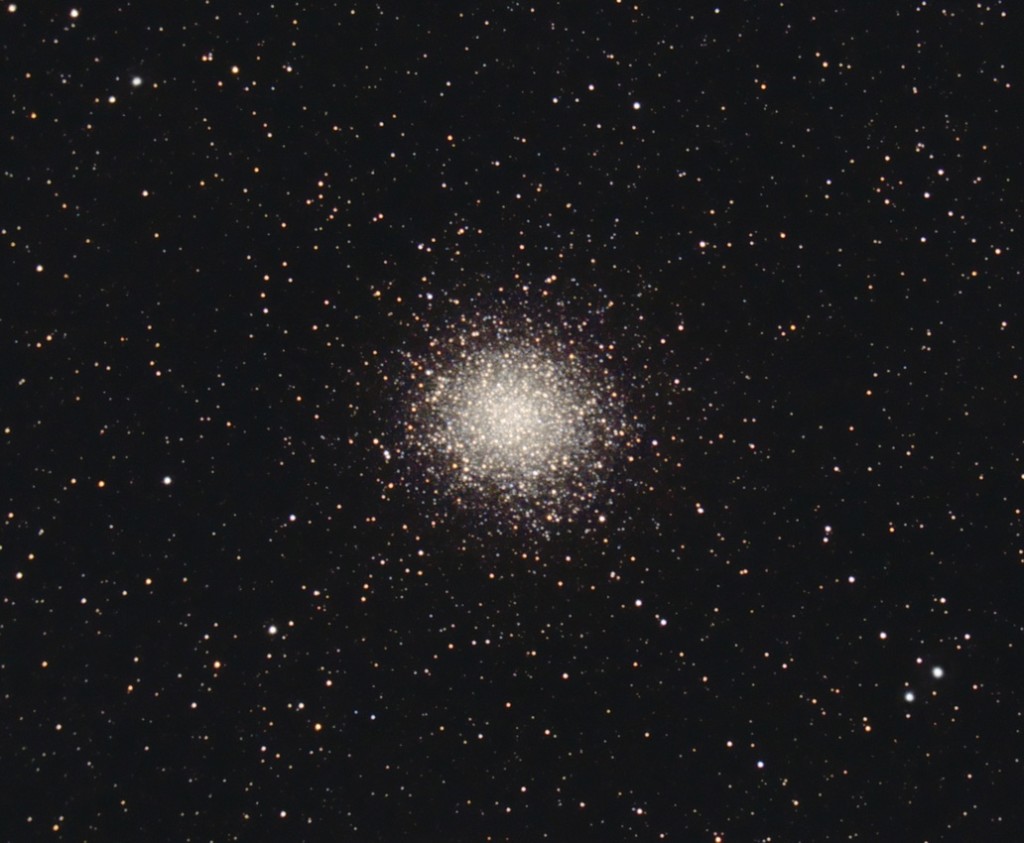 Astronomers have discovered about 70 variable stars in M14. Many of these are classified as W Virginis variables, a subclass of Type II Cepheids commonly found in globular clusters. M14 also contains a considerable number of RR Lyrae variable stars, which are used to calibrate distances to objects within the Milky Way.

A nova occurred in M14 in 1938 and reached a visual magnitude of +9.2, but was not discovered until 1964, when astronomers surveyed a series of photographic plates from that period. The photographs were taken by the American astronomer Helen Sawyer Hogg between 1932 and 1963 with a 72-inch reflector at the Dominion Astrophysical Observatory in British Columbia. This was the first nova ever photographed and the second to be discovered in a globular cluster, after the 1860 nova observed in Messier 80.

A carbon star was discovered in the M14 cluster in 1997. The star’s carbon-enriched core likely reached up to the surface after the star had lost its outer layers in close encounters with other stars in the cluster.

Messier 14 has an absolute magnitude of -9.12 and a total luminosity about 400,000 times that of the Sun. While it appears fainter than Messier 10 and Messier 12, the other two famous globular clusters in Ophiuchus, M14 is the largest of the three and has a significantly greater intrinsic luminosity than the other two. It is almost twice as distant as M12 and more than twice as distant as M10.

The cluster was discovered by Charles Messier, who described it as a nebula without stars and catalogued it on June 1, 1764. The entry in the first Messier catalogue read:

In the same night of June 1 to 2, 1764, I have discovered a new nebula in the garb which dresses the right arm of Ophiuchus; on the charts of Flamsteed it is situated on the parallel of the star Zeta Serpentis: that nebula is not considerable, its light is faint, yet it is seen well with an ordinary [non-achromatic] refractor of 3 feet & a half [FL]; it is round, & its diameter can be 2 minutes of arc; above it & very close to it is a small star of the nineth magnitude. I have employed for seeing this nebula nothing but the ordinary refractor of 3 feet & a half with which I have not noticed any star; maybe with a larger instrumentone could perceive one. I have determined the position of that nebula by its passage of the Meridian, comparing it with Gamma Ophiuchi, it has resulted for its right ascension 261d 18′ 29″, & for its declination 3d 5′ 45″ south. I have marked that nebula on the chart of the apparent path of the Comet which I have observed last year [the comet of 1769].

William Herschel observed the cluster in 1783 and was the first to resolve it into individual stars. On July 30, he wrote, “With a power of 200, I see it consists of stars. They are better visible with 300. With 600, they are too obscure to be distinguished, though the appearance of stars is still preserved. This seems to be one of the most difficult objects to be resolved. With me, there is not a doubt remaining; but another person, in order to form a judgement, ought previously to go through all the several gradations of nebulae which I have resolved into stars.“

A large globular cluster of compressed minute stars, on the Serpent-bearer’s left arm. This fine object is of a lucid white colour, and very nebulous in aspect; which may be partly owing to its being situated in a splendid field of stars, the lustre of which interferes with it. By diminishing the field under high powers, some of the brightest of these attendants are excluded, but the cluster loses its definition. It was discovered by Messier in 1764, and thus described: “A small nebula, no star; light faint; form round; and may be seen with a telescope 3 1/2 feet long.” The mean apparent place is obtained by differentiation from Gamma Ophiuchi, from which it is south-by-west about 6deg 1/2, being nearly midway between Beta Scorpii and the tail of Aquila, and 16deg due south of Rasalhague [Alpha Ophiuchi]. Sir William Herschel resolved this object in 1783, with his 20-foot reflector, and he thus entered it: “Extremely bright, round, easily resolvable; with [magnification] 300 I can see the stars. The heavens are pretty rich in stars of a certain size [magnitude, brightness], but they are larger [brighter] than those in the cluster, and easily to be distinguished from them. This cluster is considerably behind the scattered stars, as some of them are projected upon it.” He afterwards added: “From the observations with the 20-foot telescope, which in 1791 and 1799 had the power of discering stars 75-80 times as far as the eye, the profundity of this cluster must be of the 900th order.” “It resembles the 10th Connoissance des temps [Messier 10], which probably would put on the same appearance as this, were it removed half its distance farther from us.” 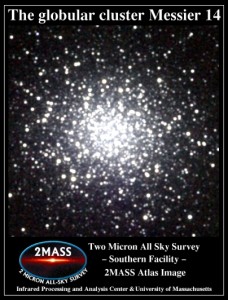 The cluster can also be located along the imaginary line from Cebalrai, an orange giant with an apparent magnitude of 2.76 and the fifth brightest star in Ophiuchus, to Antares, the bright red supergiant located in Scorpius.

The bright centre and faint outer halo of M14 appear in small telescopes, while 8-inch instruments will reveal the cluster’s elliptical shape. Individual stars in the cluster can only be resolved in 12-inch and larger telescopes.

The best time of year to observe the cluster is in the months of May, June and July.

The much fainter globular cluster NGC 6366 can be found just over 3 degrees to the southwest of M14. 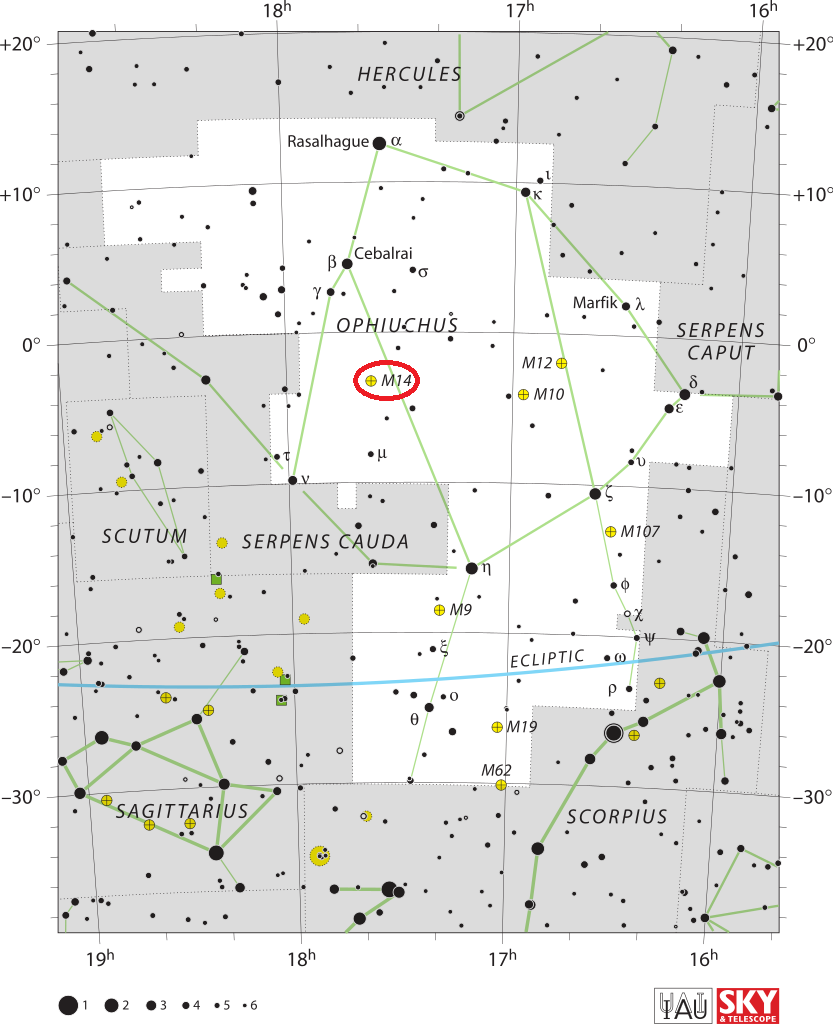