Messier 60 (M60) is a giant elliptical galaxy located in the constellation Virgo. The galaxy has an apparent magnitude of 9.8 and lies at an approximate distance of 55 million light years from Earth. It has the designation NGC 4649 in the New General Catalogue.

Messier 60 is a member of the Virgo Cluster, a group of more than 1,300 galaxies located in Virgo constellation. It is the third brightest elliptical galaxy in the cluster – fainter only than Messier 49 and Messier 87 – and is the dominant galaxy in a subcluster of four galaxies. The subcluster is the nearest known isolated compact group of galaxies.

Messier 60 is the easternmost Messier galaxy in the Virgo Cluster. It is located 25 arc minutes away from M59 and can be seen in the same field of view at lower magnifications. The galaxy can be found about 4.5 degrees along the line from Vindemiatrix in Virgo to Denebola in Leo.

In amateur telescopes, observers can only see the galaxy’s bright central region, which is about 4 by 3 arc minutes in diameter. 4-inch telescopes reveal the nearby spiral galaxy NGC 4647, while significantly larger instruments show many faint globular clusters in M60. The best time of year to observe the galaxy is during the months of March, April and May. 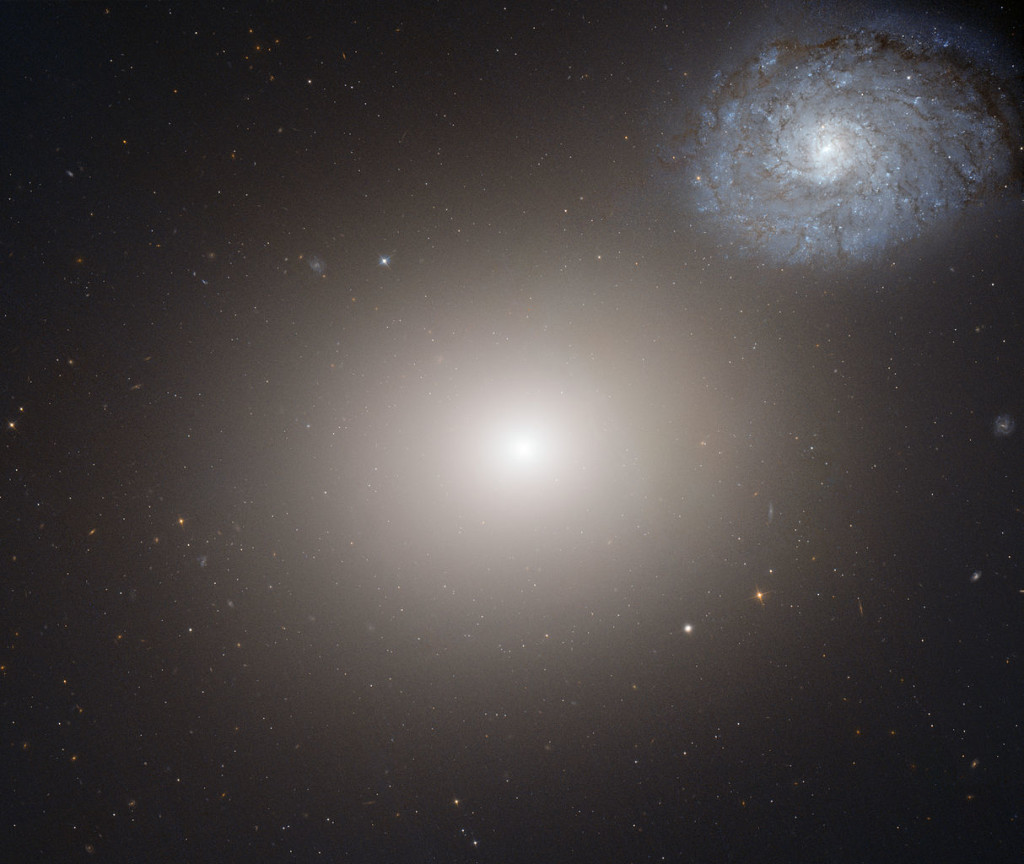 Messier 60 has an estimated mass of about a trillion solar masses and occupies an area roughly 120,000 light years in diameter. With an absolute magnitude of -22.3, the galaxy has a luminosity 60 billion times that of the Sun.

Messier 60 forms a pair known as Arp 116 with the neighbouring spiral galaxy NGC 4647. NGC 4647 lies about 2.5 arc minutes from M60 and the galaxies’ optical disks overlap. However, the two galaxies are at different distances and may have only recently started interacting with each other. 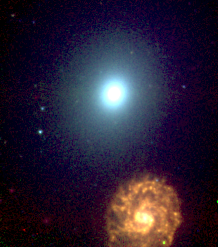 Image of the M60 galaxy in Infrared at 3.6 (blue), 5.8 (green) and 8.0 (red) µm. Image: Médéric Boquien from the public image archive of the Spitzer Space Telescope (courtesy NASA/JPL-Caltech)

The first evidence of tidal interaction between the two was detected by the Hubble Space Telescope in 2012.

Halton Arp has added M60 to his Catalogue of Peculiar Galaxies as Arp 116 with the note, “Elliptical Close To and Perturbing a Spiral.”

NGC 4647 is about the same size as the Milky Way and about two thirds the size of M60. It is considerably less massive than its giant neighbour.

Messier 60 contains a black hole with an estimated mass of about 4.5 billion times that of the Sun. It is one of the largest black holes ever discovered. The galaxy’s halo is home to an estimated 5,100 globular clusters.

Messier 60 also has several satellite galaxies. One of these, M60-UCD1, is an ultracompact dwarf galaxy, believed to be the remaining core of a more massive galaxy that lost much of its mass in an encounter with the much larger M60 about 10 billion years ago.

M60-UCD1 is the smallest and least massive galaxy with a confirmed central black hole and may be the densest galaxy known. It has more than a hundred stars per cubic light year. 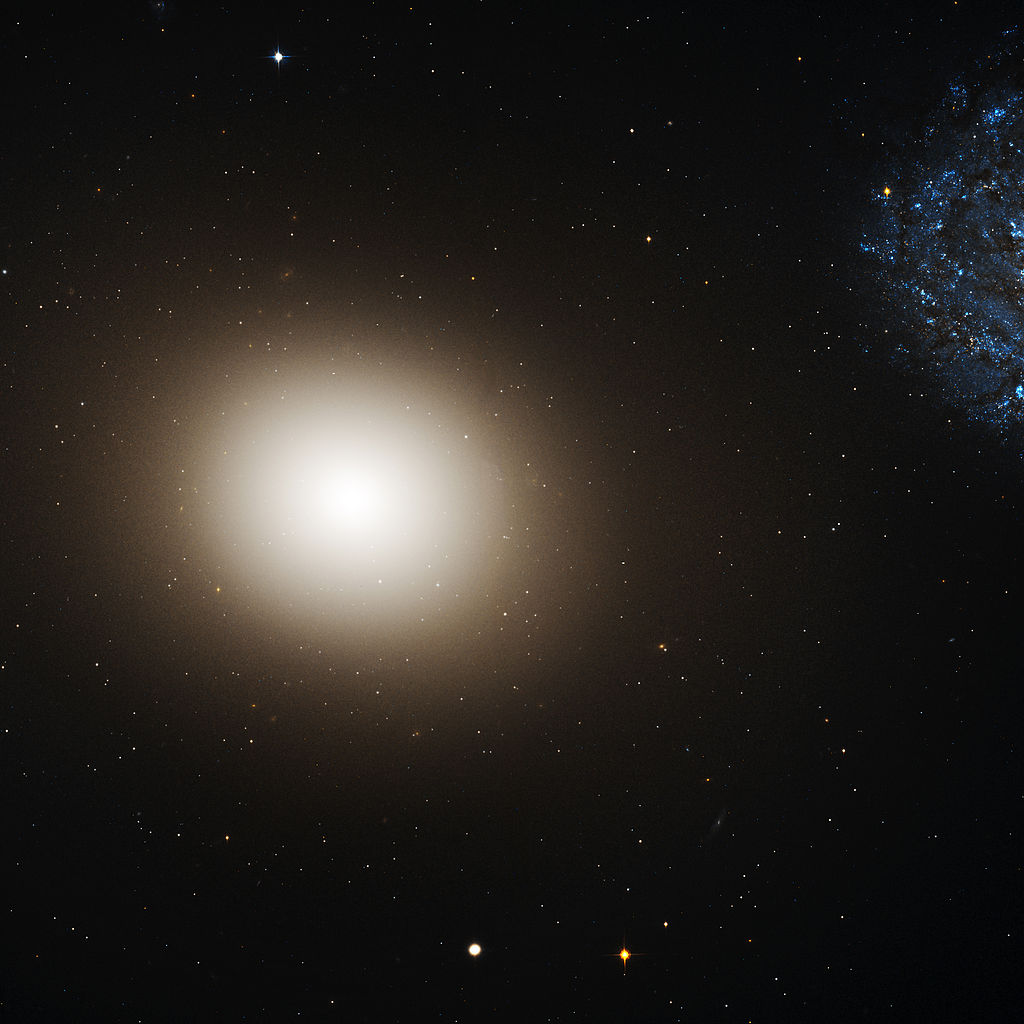 The galaxy known as M60-UCD1 (bright white circle near bottom edge, just to the left of center) is located near a massive elliptical galaxy NGC 4649, also called M60, about 54 million light-years from Earth. This image shows M60 and the region around it. Packed with an extraordinary number of stars, M60-UCD1 is an “ultra-compact dwarf galaxy.” It is one of the most massive galaxies of its kind, weighing 200 million times more than our Sun, based on observations with the Keck 10-meter telescope in Hawaii. Remarkably, about half of this mass is found within a radius of only about 80 light-years. This would make the density of stars about 15,000 times greater than found in Earth’s neighborhood in the Milky Way, meaning that the stars are about 25 times closer. Image: NASA, ESA, CXC, and J. Strader (Michigan State University)

A supernova was observed in M60 in 2004. Designated SN 2004W, it was classified as a subtype of Ia. When it was detected, the supernova had already faded to magnitude 18.8. It had remained undetected for months because M60 was near its solar conjunction at the time.

Messier 60 and its close neighbour Messier 59 were discovered by the German astronomer Johann Gottfried Koehler in on April 11, 1779. Koehler was observing a comet when he discovered the galaxies. He noted, “Two very small nebulae, hardly visible in a 3-foot telescope: The one above the other.”

Italian astronomer Barnaba Oriani independently discovered M60 a day after Koehler did, but he did not spot the neighbouring M59. He described M60 as “very pale and looking exactly like the comet [1779 Bode, C/1779 A1].” 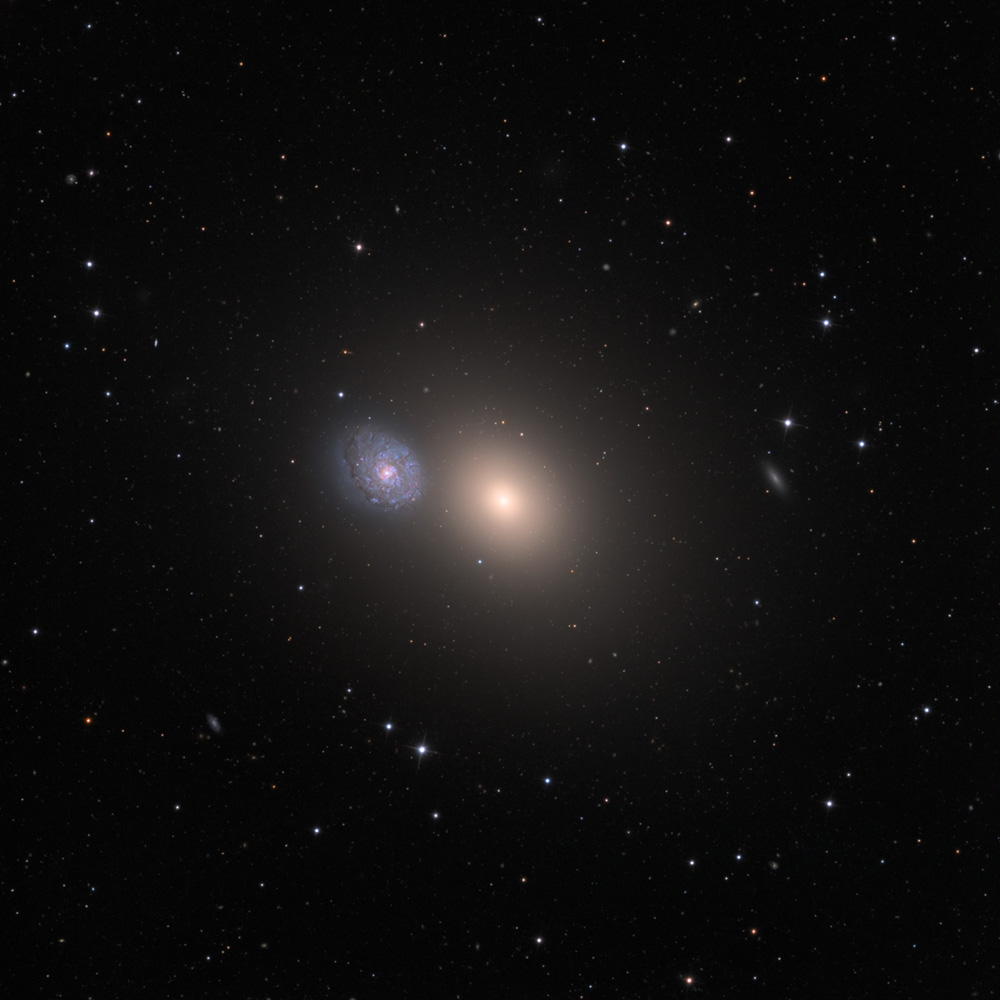 Charles Messier discovered the two galaxies independently a few days after Koehler and included them in his catalogue along with the nearby M58 on April 15, 1779. He wrote:

Nebula in Virgo, a little more distinct than the two preceding [M58 and M59], on the same parallel as Epsilon [Virginis], which has served for its [position] determination. M. Messier reported it on the Chart of the Comet of 1779. He discovered these three nebulae while observing this Comet which passed very close to them. The latter passed so near on April 13 & 14 that the one & the other were both in the same field [of view] of the refractor, and he could not see it; it was not until the 15th, while looking for the Comet, that he perceived the nebula. These three nebulae don’t appear to contain any star. 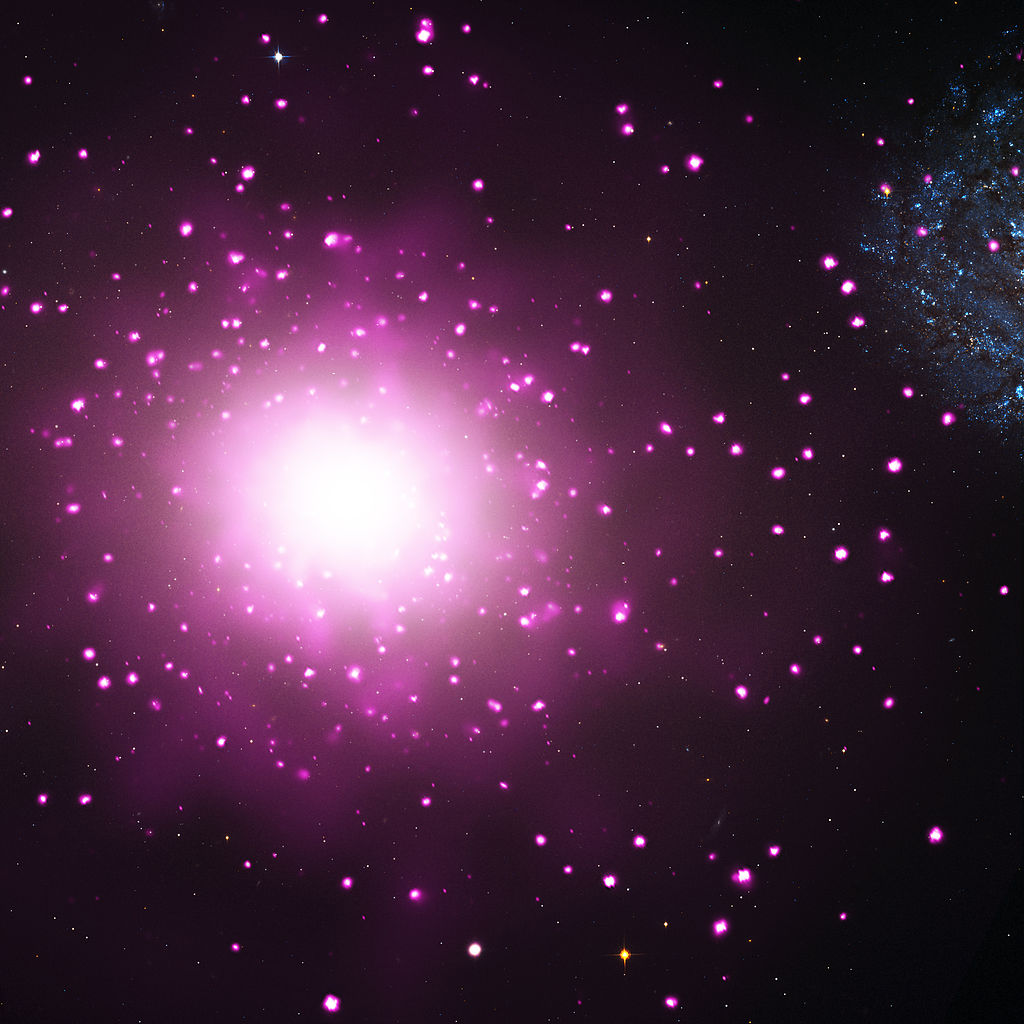 This composite image shows Messier 60 and the region around it, where data from NASA’s Chandra X-ray Observatory are pink and data from NASA’s Hubble Space Telescope are red, green and blue. Image: NASA, ESA, CXC, and J. Strader (Michigan State University)

A double nebula, in the centre of Virgo‘s left wing, lying np [north preceding, NW] and sf [south following, SE], about 2′ or 3’ from centre to centre, the preceding one [NGC 4647] being extremely faint. The following, or brighter one, is that seen and imperfectly described by Messier in 1779, and is nearly between two telescopic stars vertically posited. A fine field is exhibited under the eye-piece, which magnifies 93 times, just as this object enters, because the bright little nebula 59 M. is quitting the np [north preceding, NW] verge, and another small one is seen in the upper part, H. 1402 [NGC 4638]: in fact, four nebulae at once.

The hypothesis of Sir John Herschel, upon double nebulae, is new and attracting. They may be stellar systems each revolving round the other: each a universe, according to ancient notions. But as these revolutionary principles of those vast and distant firmamental clusters cannot for ages yet be established, the mind lingers in admiration, rather than comprehension of such mysterious collocations. Meantime our clear duty is, so industriously to collect facts, that much of what is now unintelligible, may become plain to our successors, and a portion of the grand mechanism now beyond our conception, revealed. “How much,” exclaims Sir John Herschel, “how much is escaping us! How unworthy is it in them who call themselves philosophers, to let these great phenomena of nature, these slow but majestic manifestations of power and the glory of God, glide unnoticed, and drop out of memory beyond the reach of recovery, because we will not take the pains to note them in their unobtrusive and furtive passage, because we see them in their every-day dress, and mark no sudden change, and conclude that all is dead, because we will not look for signs of life; and that all is uninteresting, because we are not impressed and dazzled.” … “To say, indeed, that every individual star in the Milky Way, to the amount of eight or ten millions, is to have its place determined, and its motion watched, would be extravagant; but at least let samples be taken, at least let monographs of parts be made with powerful telescopes and refined instruments, that we may know what is going on in that abyss of stars, where at present imagination wanders without a guide!” Such is the enthusiastic call of one, whose father cleared the road by which we are introduced to the grandest phenomena of the stellar universe.

This mysterious and shadowy doublet will be found 5deg west of Vindemiatrix, in the direction of Regulus, where there is a very large and wonderful nebulous region. 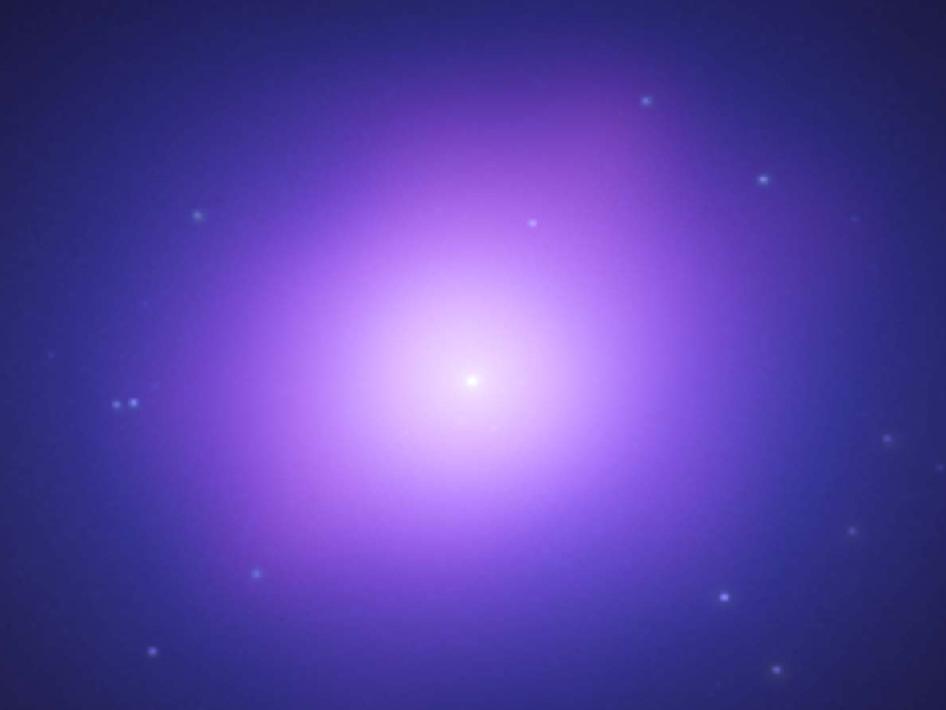 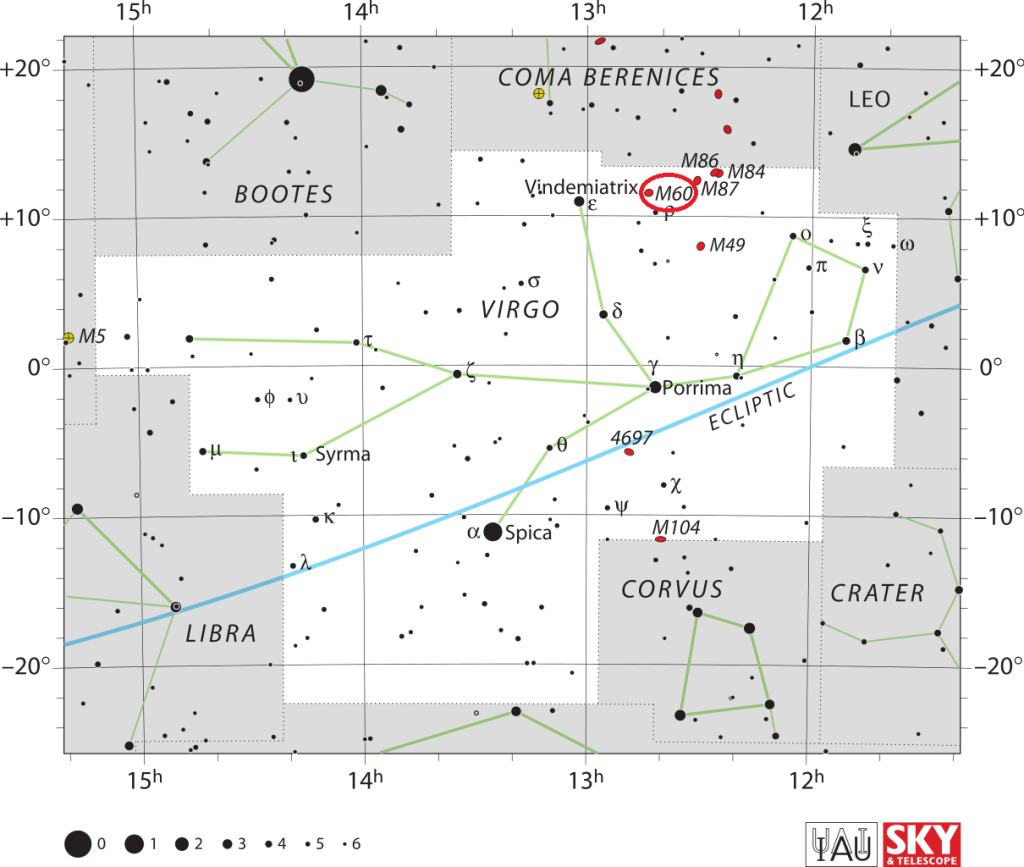