Messier 106 (M106) is a spiral galaxy located in the constellation Canes Venatici, the Hunting Dogs. M106 lies at a distance of 23.7 million light years from Earth and has an apparent magnitude of 9.1. It has the designation NGC 4258 in the New General Catalogue.

Messier 106 occupies an area of 18.6 by 7.2 arc minutes of apparent sky, corresponding to a spatial diameter of 135,000 light years. It is similar in size and luminosity to the Andromeda Galaxy (M31) and is one of the brightest, largest nearby galaxies.

Messier 106 lies along a line drawn from Phecda (Phad), Gamma Ursae Majoris, the star marking the bottom of the Big Dipper toward the handle, to Cor Caroli, Alpha Canum Venaticorum, the brightest star in Canes Venatici constellation. M106 can also be located by extending the line from Dubhe, Alpha Ursae Majoris to Phecda. Dubhe is the northern of the Pointer Stars, the two stars of the Big Dipper that point the way to Polaris in Ursa Minor. 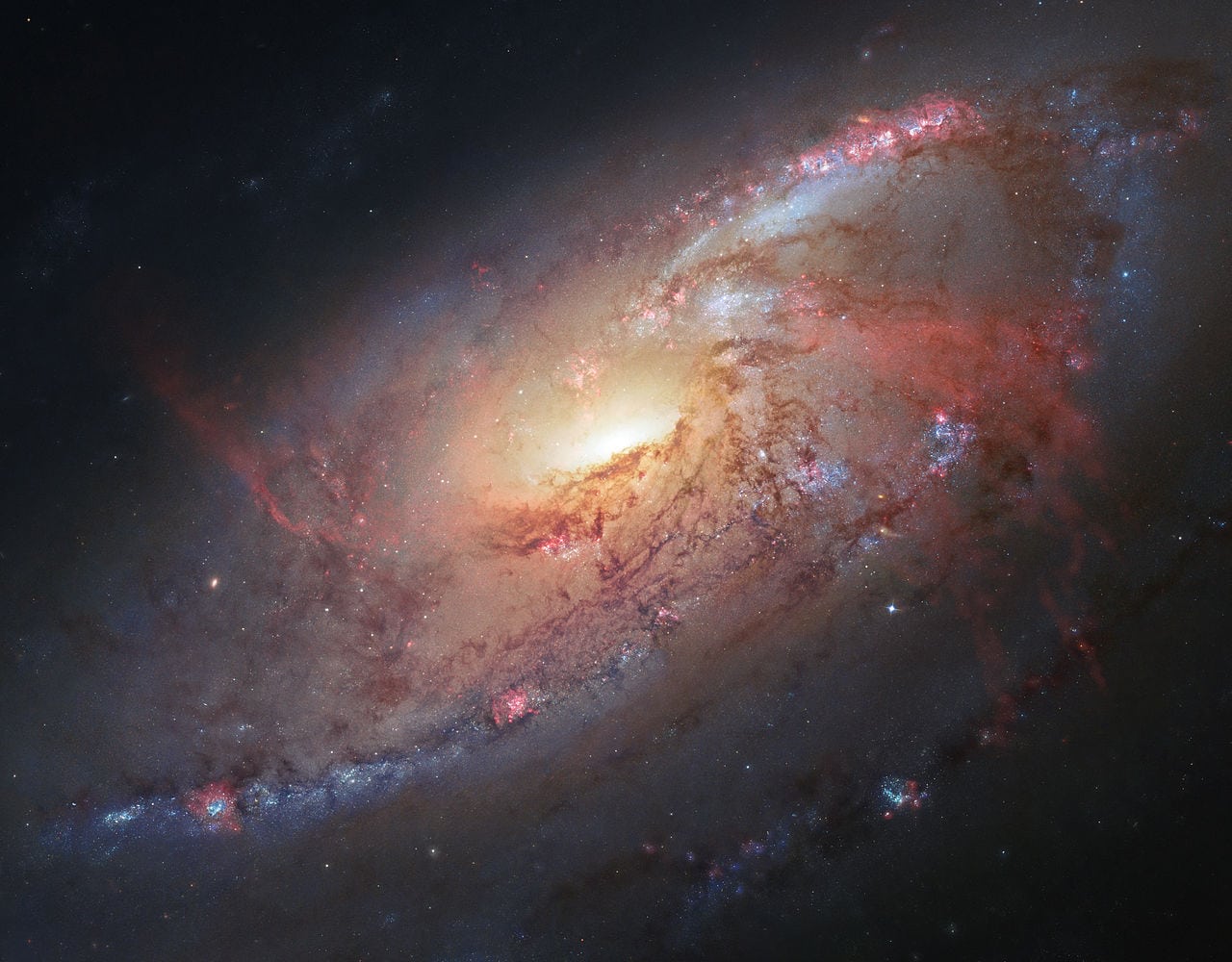 The NASA/ESA Hubble Space Telescope – with a little help from an amateur astronomer – has produced one of the best views yet of nearby spiral galaxy Messier 106. Located a little over 20 million light-years away, practically a neighbour by cosmic standards, Messier 106 is one of the brightest and nearest spiral galaxies to our own. Despite its appearance, which looks much like countless other galaxies, Messier 106 hides a number of secrets. Thanks to this image, which combines data from Hubble with observations by amateur astronomers Robert Gendler and Jay GaBany, they are revealed as never before. At its heart, as in most spiral galaxies, is a supermassive black hole, but this one is particularly active. Unlike the black hole at the centre of the Milky Way, which pulls in wisps of gas only occasionally, Messier 106’s black hole is actively gobbling up material. As the gas spirals towards the black hole, it heats up and emits powerful radiation. Part of the emission from the centre of Messier 106 is produced by a process that is somewhat similar to that in a laser – although here the process produces bright microwave radiation. As well as this microwave emission from Messier 106’s heart, the galaxy has another startling feature – instead of two spiral arms, it appears to have four. Although the second pair of arms can be seen in visible light images as ghostly wisps of gas, as in this image, they are even more prominent in observations made outside of the visible spectrum, such as those using X-ray or radio waves. Unlike the normal arms, these two extra arms are made up of hot gas rather than stars, and their origin remained unexplained until recently. Astronomers think that these, like the microwave emission from the galactic centre, are caused by the black hole at Messier 106’s heart, and so are a totally different phenomenon from the galaxy’s normal, star-filled arms. The extra arms appear to be an indirect result of jets of material produced by the violent churning of matter around the black hole. As these jets travel through the galactic matter they disrupt and heat up the surrounding gas, which in turn excites the denser gas in the galactic plane and causes it to glow brightly. This denser gas closer to the centre of the galaxy is tightly-bound, and so the arms appear to be straight. However, the looser disc gas further out is blown above or below the disc in the opposite direction from the jet, so that the gas curves out of the disc — producing the arching red arms seen here. Image: NASA, ESA, the Hubble Heritage Team (STScI/AURA), and R. Gendler (for the Hubble Heritage Team). Acknowledgment: J. GaBany

Messier 106 can also be found using Megrez, Delta Ursae Majoris, the faintest star of the Big Dipper asterism, which connects the Dipper’s bowl to the handle. The magnitude 4.8 star 5 Canum Venaticorum (5 CVn) lies 5.5 degrees south and a little east of Megrez and M106 is positioned a little over 4 degrees to the south of 5 CVn. The best time of year to observe M106 is during the spring. The galaxy is a challenging object for southern observers because it never rises very high in the sky.

Messier 106 is classified as a SABbc type galaxy, which means that it is an intermediate between a normal and barred spiral galaxy. It is home to at least 400 billion stars.

Messier 106 is also classified as a Seyfert II galaxy. It has a considerably larger extent in radio than in visible light and exhibits emission line spectra from the nucleus. M106 shows unusual emission lines and X-rays, indicating that a portion of the galaxy is falling into a central supermassive black hole. 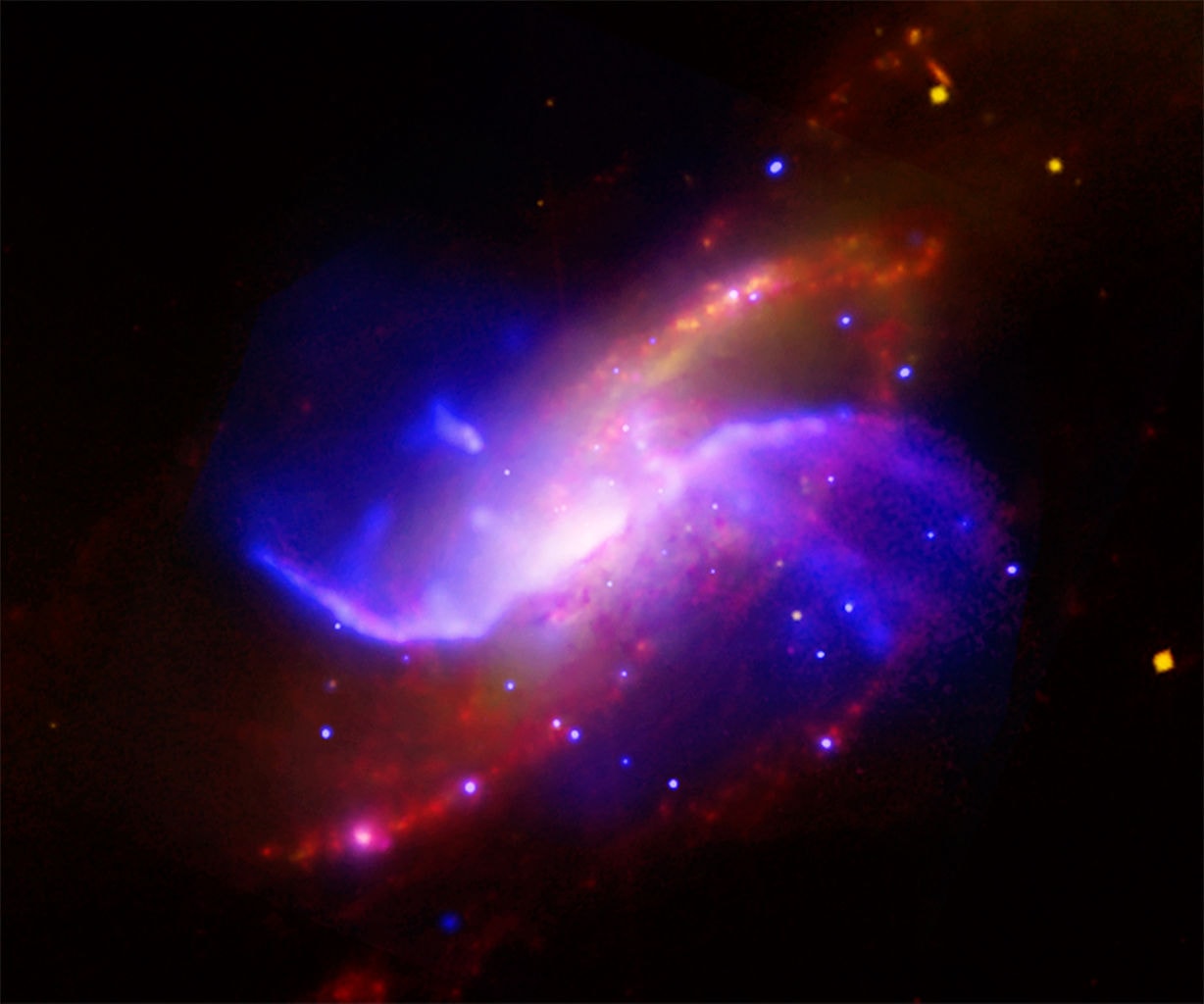 The galaxy has a thin, slightly warped disk that appears almost edge-on. The disk surrounds the galaxy’s central region.

Observations with the Very Large Baseline Array radio telescope in 1995 revealed that M106 may contain massive dark objects, with 36 million solar masses contained within a volume of about 1/24 to 1/12 light year radius. At the time, this was the densest concentration of matter ever discovered.

M106 is a maser galaxy. It has a dense disk that works as a maser (Microwave Amplifier by Stimulated Emission of Radiation). A maser is a microwave laser, or a laser that operates in microwave instead of visible light, on a galactic scale. The nuclear megamaser ring, which made it possible to directly measure distance to a galaxy for the first time, is responsible for M106’s purple colour.

Messier 106 may have a companion galaxy, the spiral galaxy NGC 4217. NGC 4217 is about 80,000 light years across and appears almost perfectly edge on. 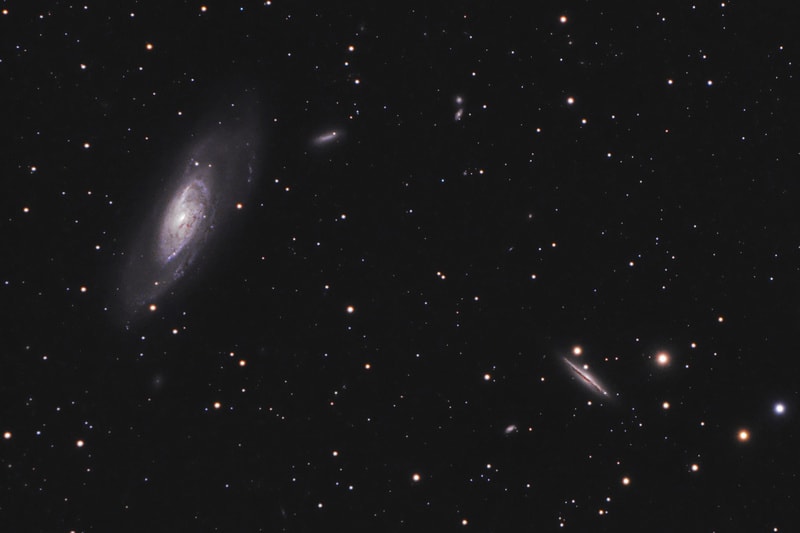 Messier 106 is the largest member of the Canes Venatici II Group (CVn II Group), a group of galaxies in the Local Supercluster, located at a distance of about 26.1 million light years from Earth.

Messier 106 was discovered by the French astronomer Pierre Méchain in July of 1781. Méchain mentioned the discovery in a letter to Johann Bernoulli dated May 6, 1783:

In July 1781 I found another nebula close to the Great Bear near the star No. 3 of the Hunting Dogs and 1 deg more south, I estimate its right ascension 181d 40′ and its northern declination about 49d. I will be going to determine the more accurate position of this one shortly.

The galaxy, however, was not included in the Messier Catalogue until 1947, when Helen Sawyer Hogg added it along with M105 and M107 based on Méchain’s letter. 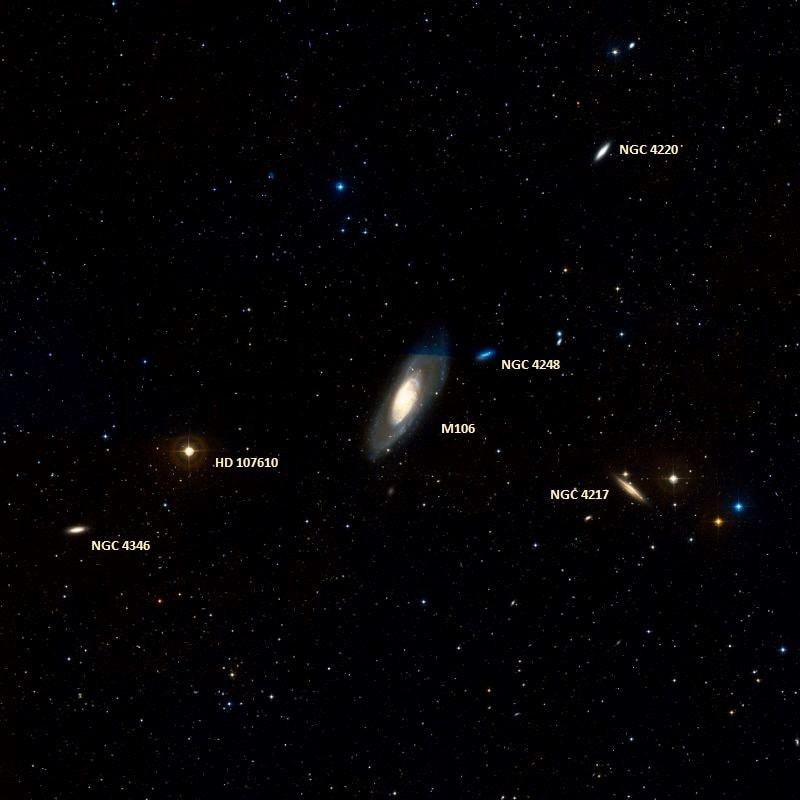 William Herschel independently discovered M106 on March 9, 1788 and catalogued it as H V.43. He noted:

Very brilliant. Bright nucleus. With faint milky branches north preceding and south following. 15′ long and to the south following running into very faint nebulosity extending a great way. The nucleus is not round.

John Herschel catalogued the object as h 1175 in 1833 and later included it in the General Catalogue as GC 2841. He described it as “very bright; very large; very much extended in position angle 0 degrees; suddenly much brighter toward the middle where there is a nucleus.”

From 22 million light-years away, galaxy M106 extends two ultraviolet-bright spiral arms in this image from NASA’s Galaxy Evolution Explorer. M106’s extended arms are the blue filaments that curve around the edge of the galaxy, creating its outer disk. Tints of blue in the galaxy’s arms reveal hot, young, massive stars. Meanwhile, traces of gold toward the center reveal an older stellar population and the presence of obscuring dust. From 24 million-light years away, neighboring galaxy NGC 4248 can be seen sitting just right of M106. The irregular galaxy looks like a yellow smudge, with a bluish-white bar in the center. The galaxy’s outer golden glow indicates a population of older stars, while the blue central region shows a younger stellar demographic.
Dwarf galaxy UGC 7365 also emerges at the bottom center of the frame, as a faint yellow smudge directly below M106. This galaxy is not forming any new stars, and looks much smaller than M106 despite being closer to Earth, at 14 million light-years away. M106, also known as NGC 4258, is located in the constellation Canes Venatici. This image is a two-color composite, with far-ultraviolet light as blue, and near-ultraviolet light as red. Image: NASA/JPL-Caltech

A large white nebula, closely following the haunches of the Greater Bear, discovered by WH [William Herschel] in 1788, and No. 1175 of his son’s Catalogue. It is a noble-sized oval, trending rather from the vertical in a direction np [north preceding, NW] and sf [south following, SE], with a brightish nucleus in its southern portion; the lateral edges are better defined than the ends. It is preceded by two stars of the 10th magnitude, and followed by two others; and there are also some minute points of light in the field, seen occasionally by glimpses.

This object was carefully differentiated with Alkaid; and its place will be indicated by a running diagonal line across the square of Ursa Major, from Alpha through Gamma, and carrying it 7 1/2 deg into the south-east, that is, a little less than the distance between those stars.

Heber Curtis photographed M106 with the 36-inch Crossley telescope at the Lick Observatory and noted:

With the very faint extensions this spiral is nearly 20’x6′ in p.a. 165deg; very bright, elongated nuclear portion, on the west of which a short dark lane; there are numerous almost stellar condensations in the two principal spiral branches. 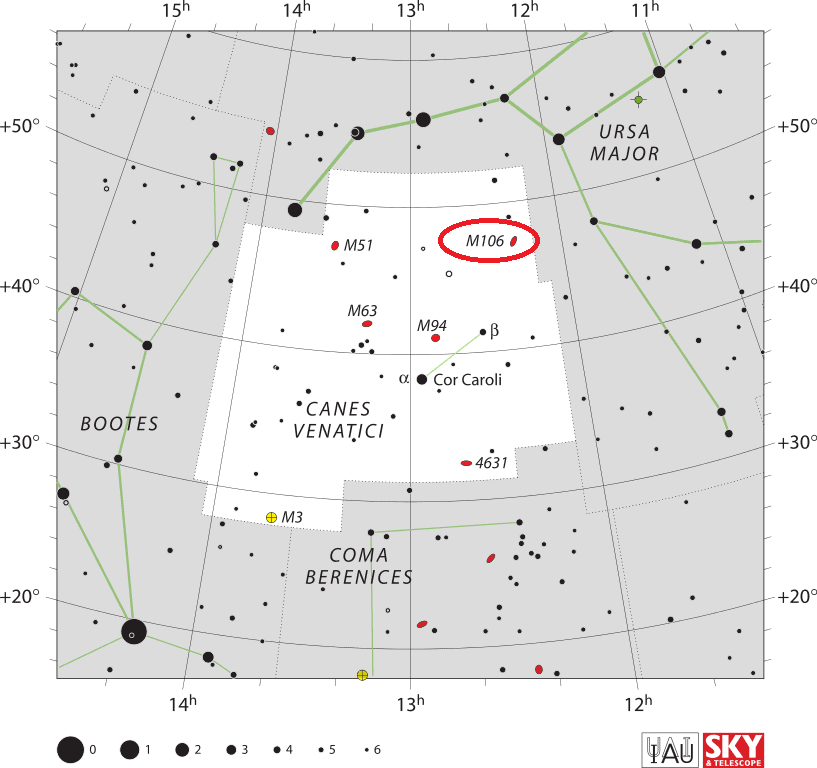