Messier 90 (M90) is a spiral galaxy located in the constellation Virgo. It is a member of the Virgo Cluster. M90 lies at a distance of 58.7 million light years from Earth and has an apparent magnitude of 10.26. Its designation in the New General Catalogue is NGC 4569.

With an apparent size of 9.5 by 4.4 arc minutes and a linear diameter of 165,000 light years, M90 is one of the larger spiral galaxies in the Virgo Cluster. It can be seen in 10×50 binoculars under exceptionally good conditions. In small telescopes, it appears as a bright, oval-shaped patch of light. 8-inch telescopes reveal the galaxy’s bright core surrounded by a patch of nebulosity. The spiral structure can be seen in large amateur telescopes.

Messier 90 is located about 1.5 degrees from the Virgo Cluster subgroup centred on Messier 87, right on the border with the constellation Coma Berenices, near the centre of the Virgo Cluster. The centre is positioned roughly halfway between the bright stars Denebola in Leo and Vindemiatrix in Virgo. M90 can be found 1.5 degrees to the northeast of M87. 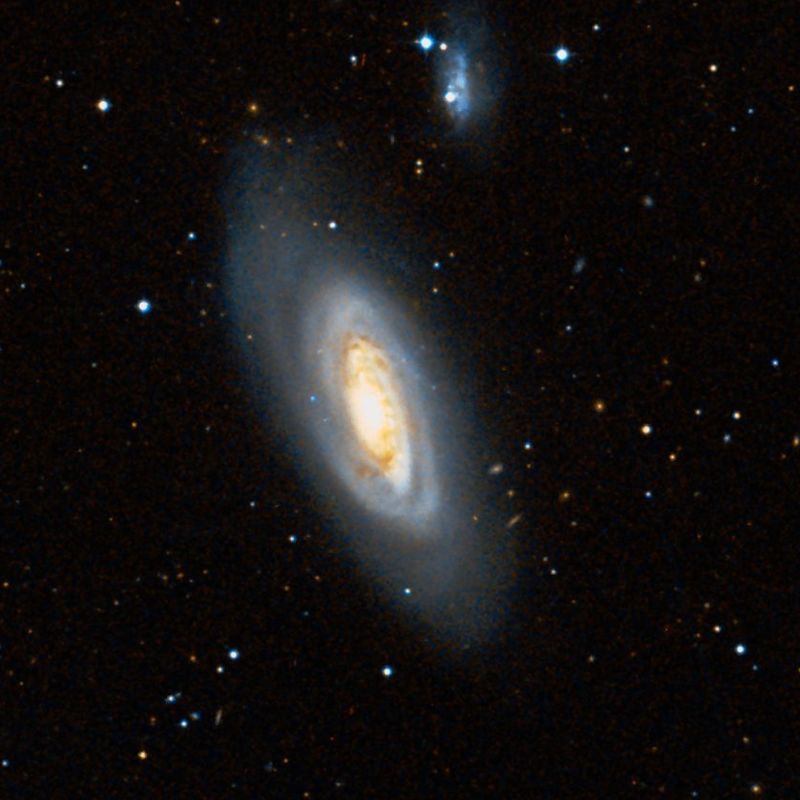 Messier 90 is one of the largest and brightest spirals in the Virgo Cluster. The galaxy has an absolute magnitude of -22, which makes it intrinsically brighter than Andromeda (M31). Its tightly wound spiral arms do not show any signs of star formation, except in regions near the darker dust lanes in the inner part of the galaxy’s disk. James D. Wray has suggested that M90 is on its way to becoming similar to Messier 64 (Black Eye Galaxy) before it evolves into a lenticular (S0) galaxy. 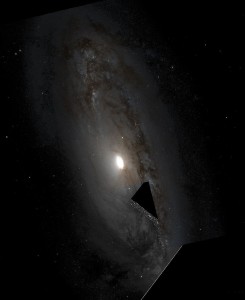 Messier 90. Based on observations made with the NASA/ESA Hubble Space Telescope, and obtained from the Hubble Legacy Archive, which is a collaboration between the Space Telescope Science Institute (STScI/NASA), the Space Telescope European Coordinating Facility (ST-ECF/ESA) and the Canadian Astronomy Data Centre (CADC/NRC/CSA).

Messier 90 is a blueshifted galaxy, one moving in our direction, in contrast to most other galaxies, which are redshifted and moving away. M90 is moving toward us at a velocity of up to 383 km/s. The only Messier galaxy approaching us at a higher velocity than M90 is M86, which may be moving at up to 419 km/s relative to us. M90 is likely moving through the Virgo Cluster at an exceptionally high velocity, at almost 1,500 km/s. The galaxy may be in the process of escaping the cluster.

Messier 90 contains an estimated trillion stars and a rich population of globular clusters. The galaxy is home to an estimated 1,000 globulars.

Messier 90 is believed to be interacting with a satellite galaxy, IC 3583, classified as an irregular galaxy.

Messier 90 has lost much of its interstellar medium as a result of interaction with the intracluster medium. The galaxy is very poor in gas compared to other spirals because it is experiencing ram-pressure stripping as it moves through the Virgo Cluster. The process is stripping the galaxy of interstellar dust and gas. The star forming regions in M90 are considerably more truncated than those in similar galaxies outside the cluster. Some of the H II regions are even found outside the galactic plane.

Up to 105 supernovae in the galaxy’s core have produced superwinds that are responsible for expelling the interstellar medium from the galaxy to the intracluster medium.

The spiral arms of M90 appear featureless, not dotted with star forming regions like other spiral galaxies. For this reason, M90 is classified as an anemic galaxy and serves as a prototype for this class of galaxies. 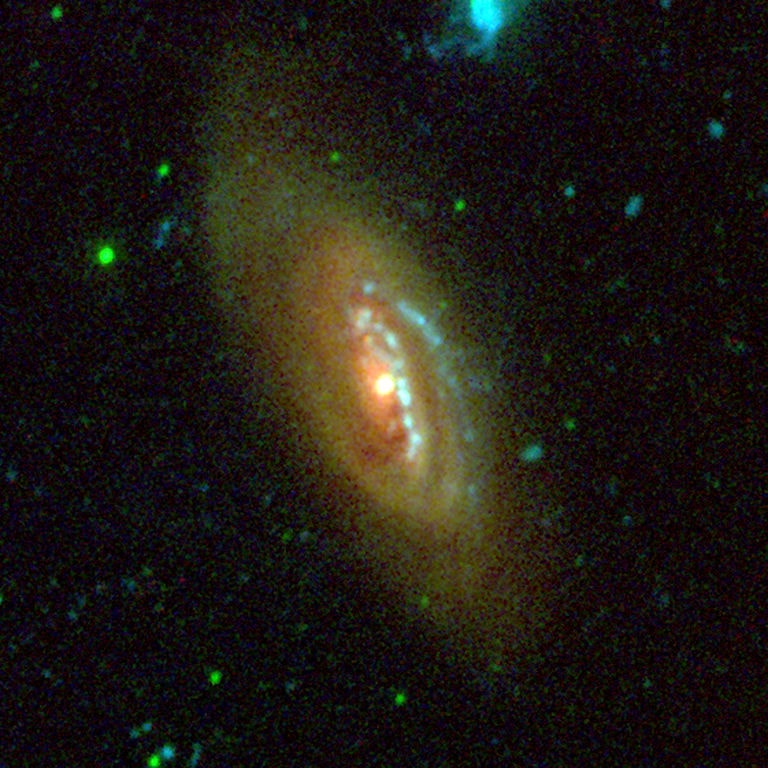 This image from NASA’s Galaxy Evolution Explorer shows the galaxy NGC 4569, located about four million light-years away in the constellation Virgo. It is one of the largest and brightest spiral galaxies found in the Virgo cluster of galaxies, the nearest major galaxy cluster to our Milky Way galaxy.
Blue represents ultraviolet light captured by the telescope’s long-wavelength detector. Green shows ultraviolet light from the short-wavelength detector, and red shows red visible light from the Palomar 1.5-meter telescope, near San Diego.
The Galaxy Evolution Explorer data was taken in March 2004. Image: NASA/JPL-Caltech/Palomar

Halton Arp included M90 in his Atlas of Peculiar Galaxies as Arp 76, describing the galaxy as a “Spiral with a High Surface Brightness Companion.”

The 14th magnitude companion, IC 3583, which can be seen in the same field of view as M90, is about 40,000 light years in diameter and appears slightly distorted. The smaller galaxy is receding from us at about 1,120 km/s. As the galaxies’ recessional velocities are very different, the two are not likely to stay companions, if that is what they really are now.

Messier 90 was discovered by Charles Messier on March 18, 1781, along with the globular cluster Messier 92 in Hercules constellation and Virgo Cluster members Messier 84, Messier 86, Virgo A (M87) and Messier 89 in Virgo constellation, and Messier 85, Messier 88 and Messier 91 in Coma Berenices.  Messier described M90 as a “nebula without star, in Virgo,” adding that “its light is as faint as the preceding, No. 89.” 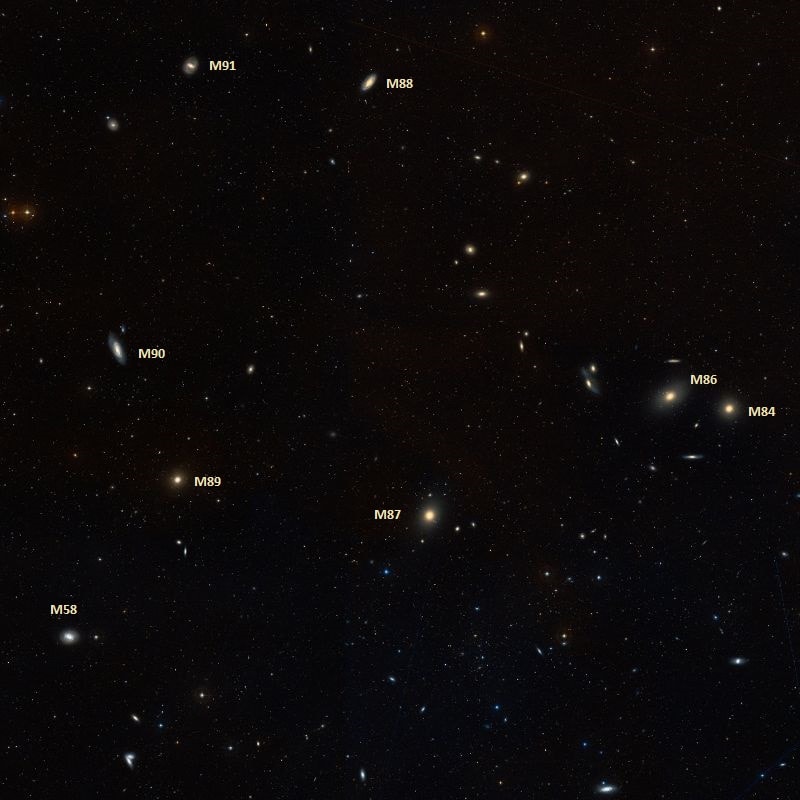 William Herschel observed M90 in April 1784 and noted that it was “pretty large, with a nucleus, perhaps cometic, but moonlight permits not to give a proper description.”

John Herschel listed M90 in the General Catalogue as GC 3111, describing it as “pretty large; brighter toward the middle where there is a nucleus.” 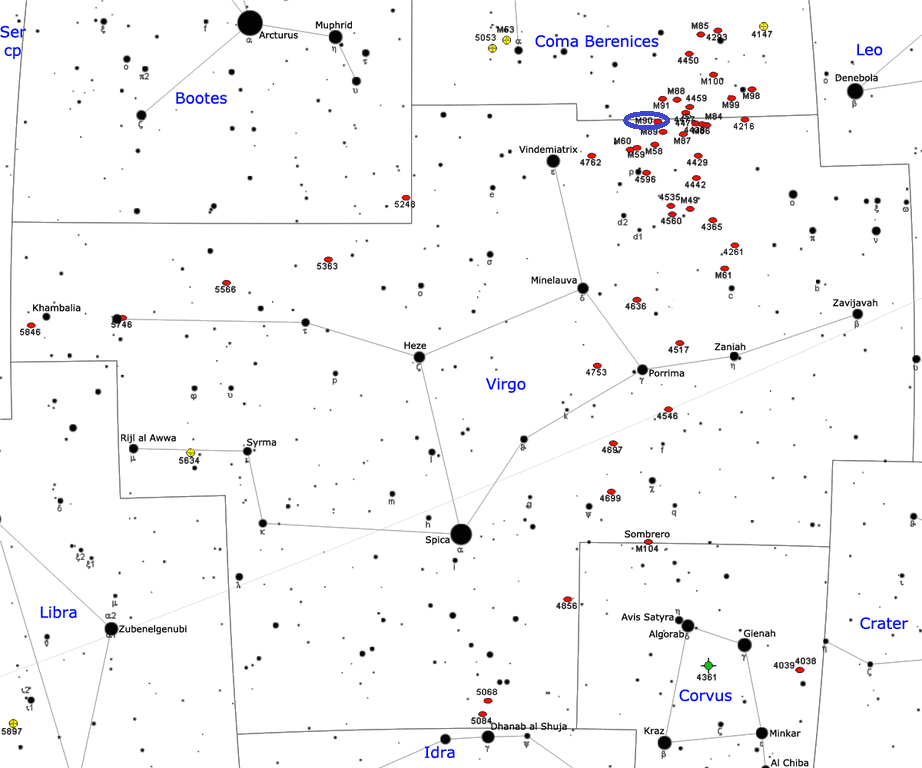