Messier 52 (M52) is a bright open cluster located in the northern constellation Cassiopeia. The cluster has an apparent magnitude of 5.0 and lies at an approximate distance of 5,000 light years from Earth. It has the designation NGC 7654 in the New General Catalogue.

Messier 52 can easily be seen with binoculars. In 10×50 binoculars, it appears as a hazy, nebulous patch of light. 4-inch telescopes reveal a dense, compressed star cluster populated by many faint stars, with a shape resembling that of the letter V. More stars are visible in 6-inch and larger instruments. The cluster occupies an area just less than half of the size of the full Moon.

Messier 52 is very easy to find as it lies near Cassiopeia‘s prominent W asterism, formed by the constellation’s brightest stars.

The cluster can be located by extending the line from Schedar, Alpha Cassiopeiae, to Caph, Beta Cassiopeiae to the northwest about the same distance as that between the two stars. The cluster lies only a degree south of the star 4 Cassiopeiae. The best time of year to observe it is during the autumn. 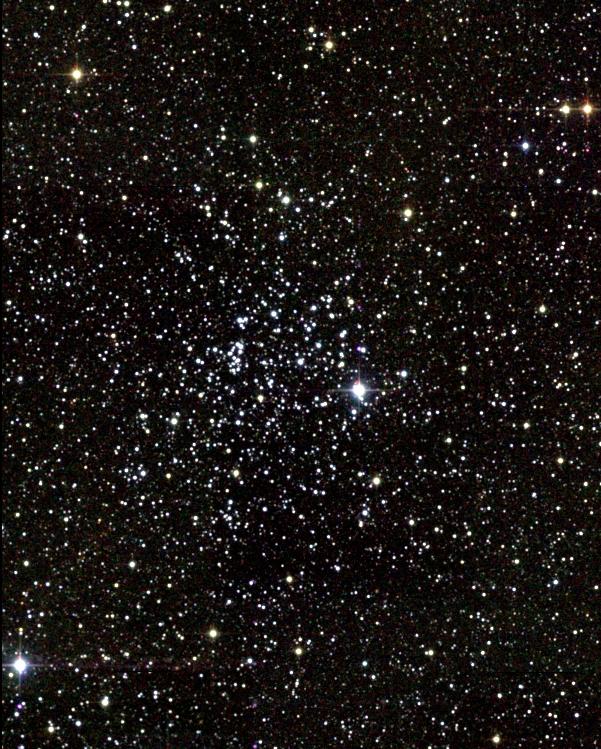 Messier 52. Atlas Image mosaic obtained as part of the Two Micron All Sky Survey (2MASS), a joint project of the University of Massachusetts and the Infrared Processing and Analysis Center/California Institute of Technology, funded by the National Aeronautics and Space Administration and the National Science Foundation.

The cluster has a Trumpler classification of I,2,r, which means that it is detached from the surrounding star field and has strong central concentration (I), it has a moderate range in brightness (2), and is richly populated (r), with 100 or more confirmed members.  The cluster’s density in the central region is about three stars per cubic parsec.

The distance to M52 has not been established with any degree of certainty because of a high interstellar absorption of the cluster’s light. Estimates are generally in the range from 3,000 to 7,000 light years.

Messier 52 contains 193 probable members within a region 9 arc minutes in radius. These were discovered by the Swedish astronomer Åke Wallenquist.

Messier 52 lies near another prominent deep sky object, the Bubble Nebula (NGC 7635). The emission nebula can be seen about 35 arc minutes southwest of the cluster. It was discovered by William Herschel in 1787. The Bubble Nebula lies at a much greater distance from us than the cluster – 11,000 light years – and the two are not physically related. 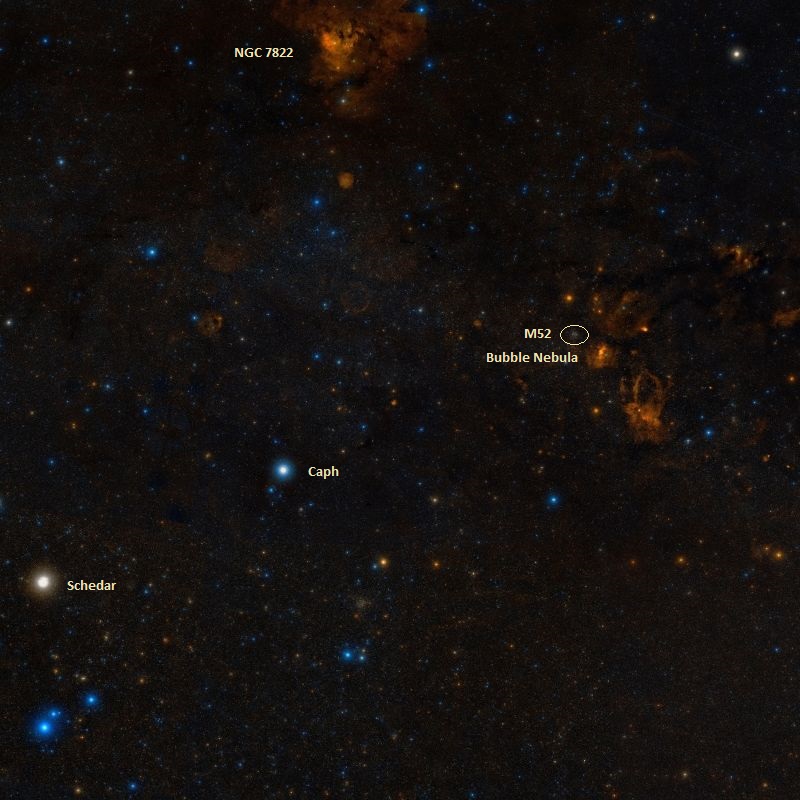 The cluster was discovered by Charles Messier, who catalogued it on September 7, 1774 with the following note:

Cluster of very small stars, mingled with nebulosity, which can be seen only with an achromatic telescope. It was when he observed the Comet which appeared in this year that M. Messier saw this cluster, which was close to the comet on the 7th of September 1774; it is below the star d Cassiopeiae: that star was used to determine [the position of] both the cluster of stars & the comet.

William Herschel observed the cluster on August 29, 1783 and wrote, “All resolved into innumerable small stars without any suspicion of nebulosity. 7 ft., 57. In the sweeper, 30, shows nebulosity, the stars being too obscure to be distinguished with its light tho’ considerable.“

After observing the cluster again on December 23, 1805, Herschel wrote:

This is a cluster of pretty condensed stars of different sizes [magnitudes]. It is situated in a very rich part of the heavens and can hardly be called insulated, it may only be a very condensed part of the Milky Way which is here much divided and scattered. It is however so far drawn together with some accumulation that it may be called a cluster of the third order.

John Herschel included the cluster in his catalogue as h 2238 in 1829 and later added it to the General Catalogue as GC 4957. He described it as a “cluster; large; rich; much compressed toward the middle; round; stars from 9th to 13th magnitude.” 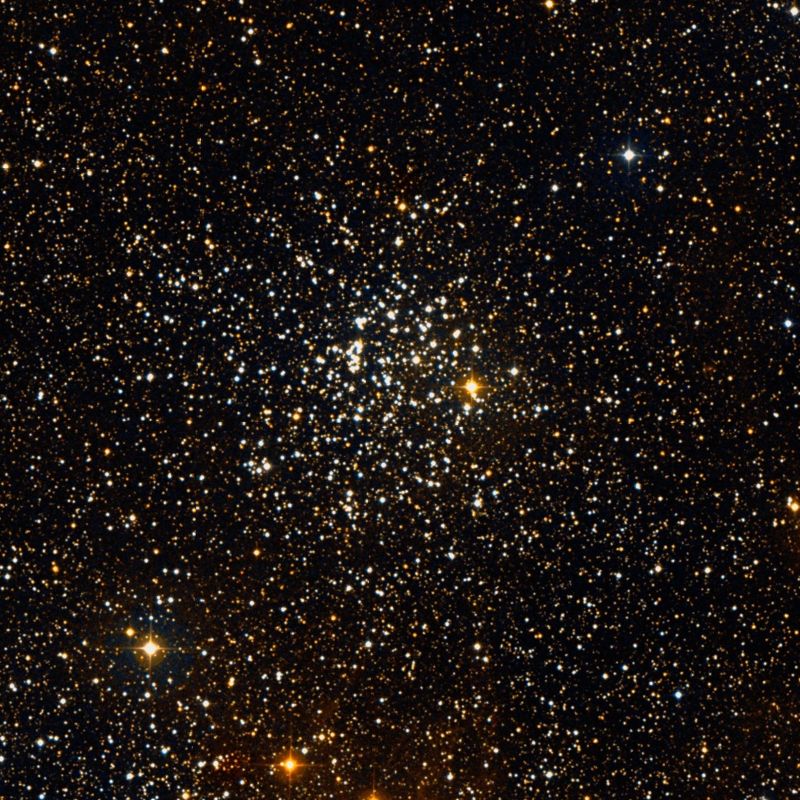 Admiral William Henry Smyth offered a more detailed description of the cluster after seeing it in July 1835:

An irregular cluster of stars between the head of Cepheus and his daughter’s throne; it lies north-west-by-west of Beta Cassiopeiae, and one third of the way towards Alpha Cephei. This object assumes somewhat of a triangular form, with an orange-tinted 8th-mag star at its vertex, giving it the resemblance of a bird with outspread wings. It is preceded by two stars of 7th and 8th magnitudes, and followed by another of similar brightness; and the field is one of singular beauty under a moderate magnifying power.While these were under examination, one of those bodies called falling stars passed through the outliers. This phenomenon was so unexpected and sudden as to preclude attention to it; but it appeared to be followed by a train of glittering and very minute spangles.

This cluster was discovered by M. Messier, “le Préposé du Ciel,” in 1774, at Paris, and was then described as “a mass of very small stars blended with nebulous matter, and requiring a good telescope to distinguish them; it looks like a solid ball of stars, compressed into a blaze of light, with stragglers.” 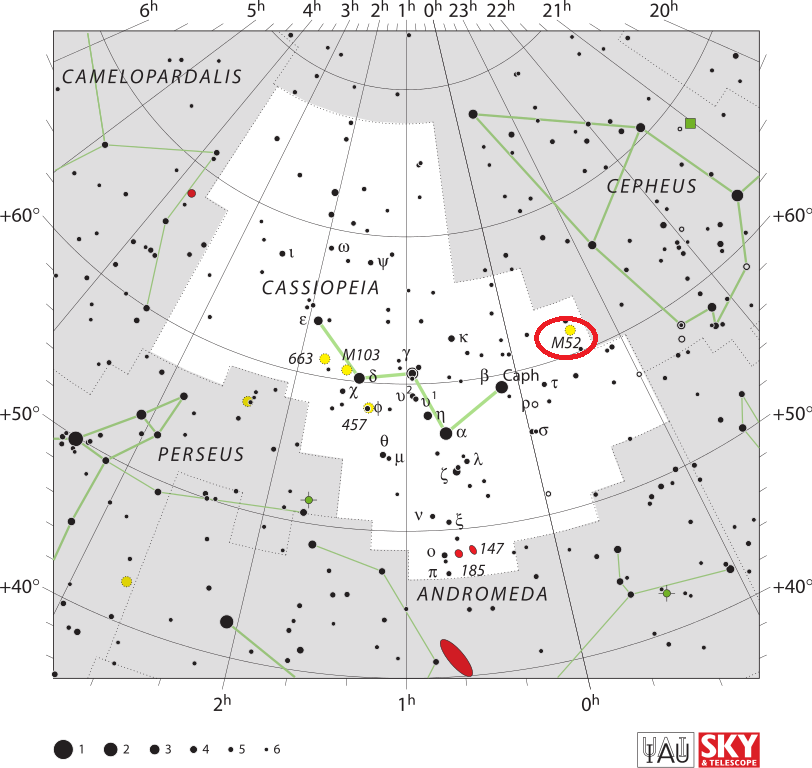