Messier 99 (M99), also known as the Coma Pinwheel or Virgo Cluster Pinwheel, is an unbarred spiral galaxy in Coma Berenices. The galaxy is a member of the Virgo Cluster. It has an apparent magnitude of 10.4 and lies at a distance of 55.7 million light years from Earth. Its designation in the New General Catalogue is NGC 4254.

The Coma Pinwheel occupies an area of 5.4 by 4.7 arc minutes of apparent sky, which corresponds to a linear diameter of 85,000 light years. It is one of the brighter spiral galaxies in the Virgo Cluster and appears almost face-on, which makes it a popular target for both professional and amateur astronomers.

Messier 99 can be found 7 degrees east of the bright star Denebola in Leo or just under a degree southeast of the magnitude 5.1 star 6 Comae Berenices, which lies 0.5 degrees east of the edge-on spiral galaxy Messier 98. The best time of year to observe M99 and other galaxies in the Virgo Cluster is during the spring. 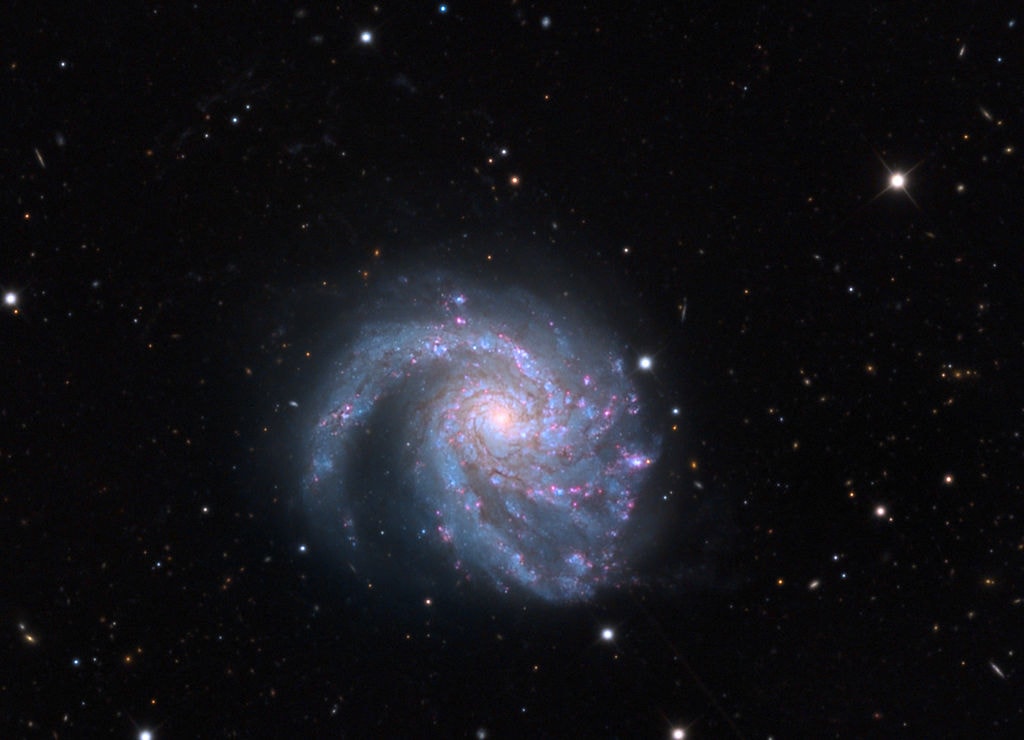 Messier 99 is a grand design spiral, completely unbarred and with two giant spiral arms. One of the spiral arms is normal and the other appears distorted. M99 is slightly asymmetric in shape, with the nucleus shifted from the galaxy’s centre, likely as a result of interactions with other galaxies in the Virgo Cluster. M99 rotates clockwise and is classified as an Sc type spiral galaxy. It is receding from us at an unusually high velocity of 2,407 km/s. This is the highest redshift recorded for any Messier object.

Even though the Virgo Cluster Pinwheel has a diameter of 80,000 light years – almost the same size as the Milky Way –with an estimated mass of 50 billion solar masses, it has only 5 percent of our galaxy’s mass.

The M99 galaxy has a normal looking arm and an extended spiral arm that appears less tightly wound. The galaxy is linked to the nearby VIRGO HI21 by a bridge of neutral hydrogen gas. The gravity from VIRGO HI21, an extended region of neutral hydrogen (HI) and suspected dark galaxy, is believed to have drawn out the gas bridge and distorted M99 in a close encounter. However, as the existence of the dark galaxy is unclear, M99 may have instead interacted with the lenticular galaxy NGC 4262 about 280 million years ago.  As a result of the encounter, the star forming rate in M99 is three times greater than in other galaxies of similar type. 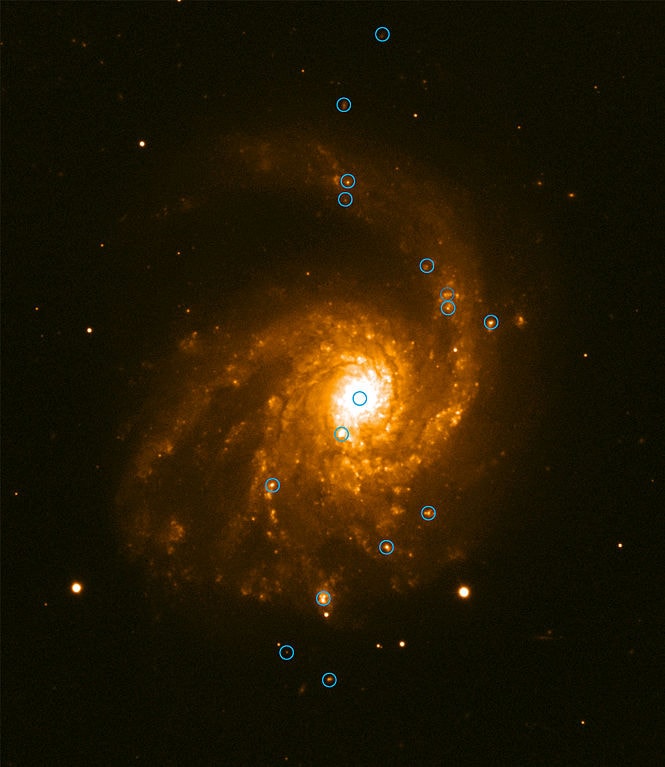 Some sources believe that M99 is currently entering the Virgo Cluster and is experiencing ram-pressure stripping and losing hydrogen as it moves through the densely populated intracluster medium. 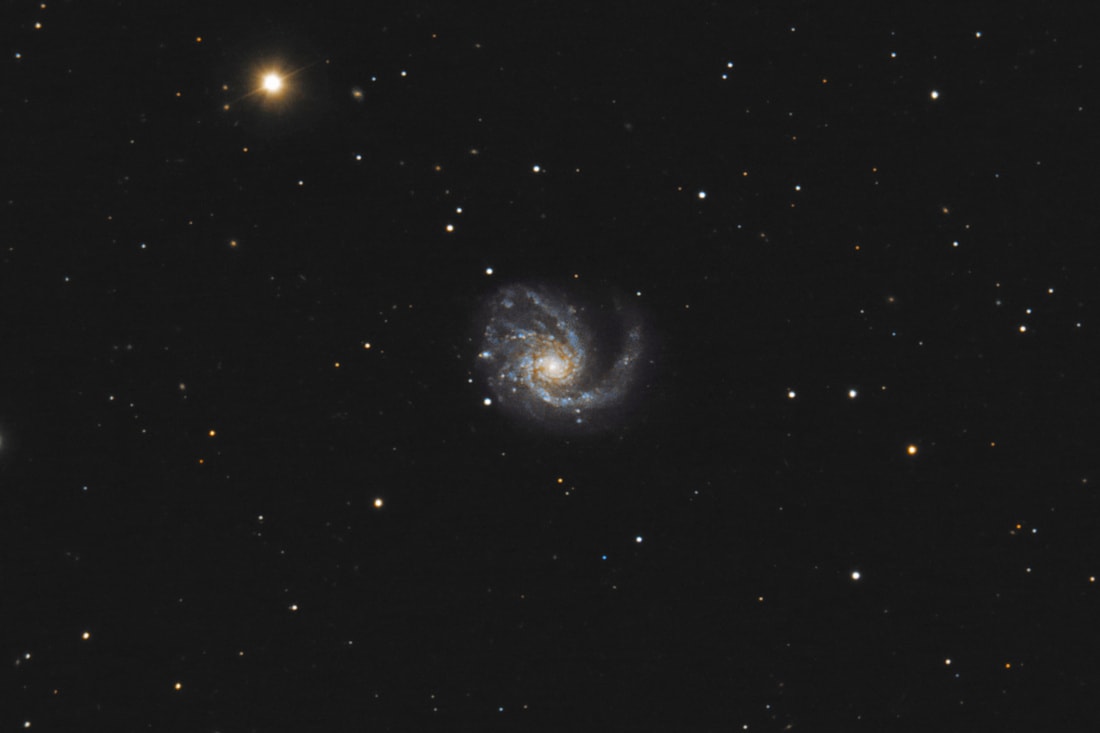 Messier 99 in the constellation Coma Berenices. Image: Hewholooks at wikipedia.org

In June 2010, images taken by the Hubble Space Telescope recorded a yellow-orange star, catalogued as PTF 10fqs, which was brighter than a nova, but fainter than a supernova. Described as a luminous red nova, the star was first spotted by the Palomar Transient Facility (PTF) while scanning the skies for transient phenomena. In May 2010, the star was described as a “transient in the luminosity ‘gap’ between novae and supernovae,” with the following note from the Palomar team:

Located on a spiral arm of Messier 99, PTF 10fqs has a peak luminosity of Mr = -12.3, red color (g-r = 1.0) and is slowly evolving (decayed by 1 mag in 68 days). It has a spectrum dominated by intermediate-width H (930 km/s) and narrow calcium emission lines. The explosion signature (the light curve and spectra) is overall similar to that of M85OT2006-1, SN2008S, and NGC300OT. The origin of these events is shrouded in mystery and controversy (and in some cases, in dust). PTF10fqs shows some evidence of a broad feature (around 8600A) that may suggest very large velocities (10,000 km/s) in this explosion. 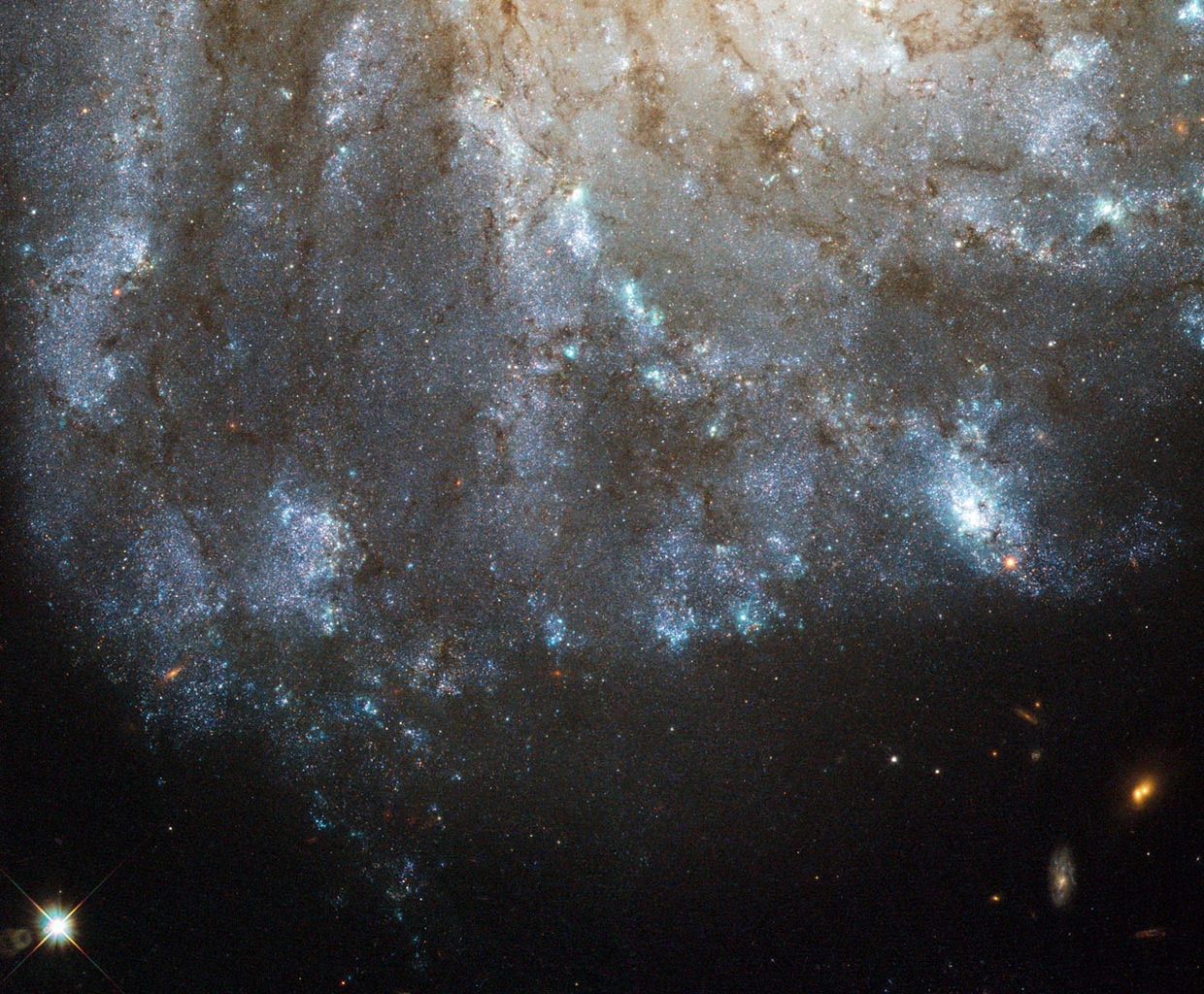 This image, taken by the NASA/ESA Hubble Space Telescope, shows a detailed view of the spiral arms on one side of the galaxy Messier 99. Messier 99 is a so-called grand design spiral, with long, large and clearly defined spiral arms — giving it a structure somewhat similar to the Milky Way.
Lying around 50 million light-years away, Messier 99 is one of over a thousand galaxies that make up the Virgo Cluster, the closest cluster of galaxies to us. Messier 99 itself is relatively bright and large, meaning it was one of the first galaxies to be discovered, way back in the 18th century. This earned it a place in Charles Messier’s famous catalogue of astronomical objects. In recent years, a number of unexplained phenomena in Messier 99 have been studied by astronomers. Among these is the nature of one of the brighter stars visible in this image. Catalogued as PTF 10fqs, and visible as a yellow-orange star in the top-left corner of this image, it was first spotted by the Palomar Transient Facility, which scans the skies for sudden changes in brightness (or transient phenomena, to use astronomers’ jargon). These can be caused by different kinds of event, including variable stars and supernova explosions. What is unusual about PTF 10fqs is that it has so far defied classification: it is brighter than a nova (a bright eruption on a star’s surface), but fainter than a supernova (the explosion that marks the end of life for a large star). Scientists have offered a number of possible explanations, including the intriguing suggestion that it could have been caused by a giant planet plunging into its parent star. This Hubble image was made in June 2010, during the period when the outburst was fading, so PTF 10fqs’s location could be pinpointed with great precision. These measurements will allow other telescopes to home in on the star in future, even when the afterglow of the outburst has faded to nothing. Image: ESA/Hubble & NASA. Acknowledgement: Matej Novak

The Virgo Cluster Pinwheel was discovered by the French astronomer Pierre Méchain on March 17, 1781, along with the galaxies Messier 98 and Messier 100. Méchain reported the discovery to his friend Charles Messier, who determined the positions for the three objects and added them to the Messier Catalogue on April 13, 1781, just before completing the third and final edition. Messier noted:

Nebula without star, of a very pale light, nevertheless a little clearer than the preceding [Messier 98], situated on the northern wing of Virgo, & near the same star, no. 6, of Comae Berenices. The nebula is between two stars of seventh & of eighth magnitude. M. Méchain saw it on March 15, 1781.

John Herschel catalogued M99 as h 1173 and later included it in his General Catalogue as GC 2838. He described the object as “very remarkable; bright; large; round; gradually brighter toward the middle; mottled.” 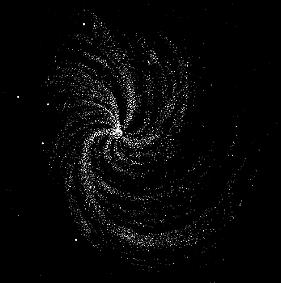 M99 was the second object Lord Rosse recognized as a spiral, after the Whirlpool Galaxy (M51), which he had discovered about a year before M99.

Rosse used his 72-inch reflector at Birr Castle in Ireland for the observations.

After observing the object on March 11, 1848, Rosse noted, “Spiral with a bright star above; a thin portion of the nebula reaches across this star and some distance past it. Principal spiral at the bottom, and turning toward the right.”

Heber Curtis photographed M99 with the Crossley reflector at the Lick Observatory and offered the following description:

A very bright, approximately round spiral 4.5′ in diameter. Nucleus almost stellar. There are two main whorls, rather open, which show many almost stellar condensations. M. 99. 47 s.n. 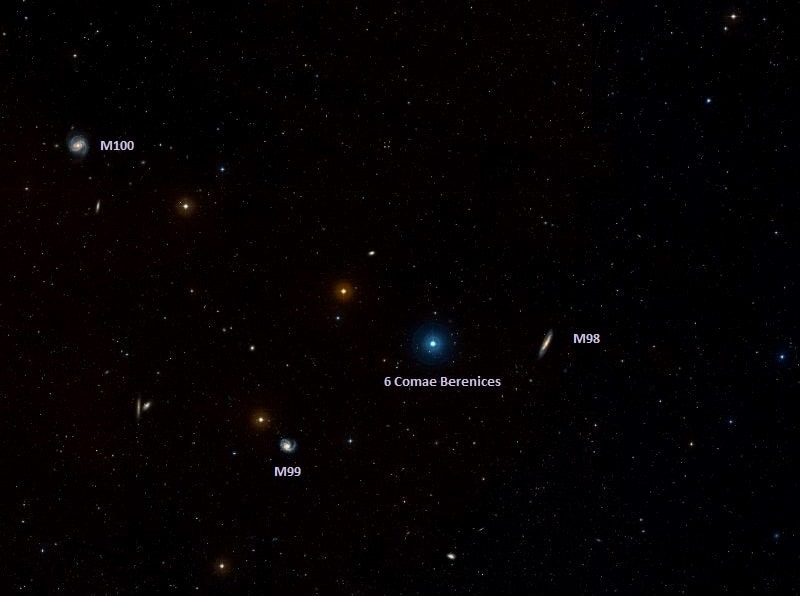 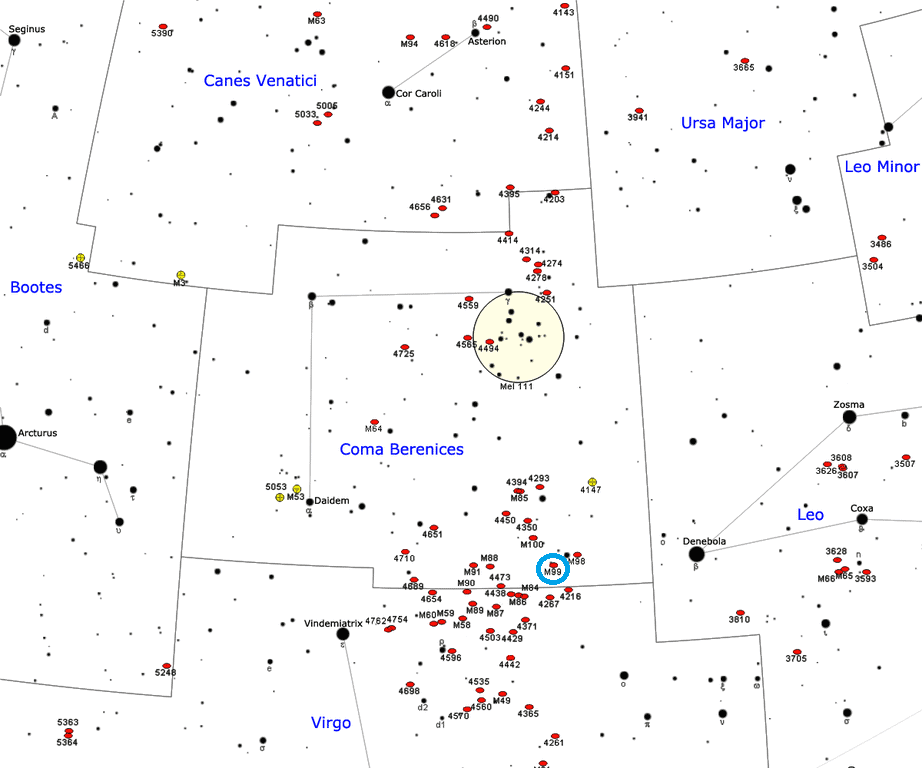