Messier 9 (M9) is a globular cluster located in the southern constellation Ophiuchus. It has the designation NGC 6333 in the new General Catalogue. The cluster lies at a distance of 25,800 light years from Earth. With an apparent magnitude of 8.42, it is too faint to be seen with the naked eye.

The cluster was discovered by Charles Messier, who added it to his catalogue on May 28, 1764. Messier described the object as a “nebula, without star, in the right leg of Ophiuchus,” and noting that “it is round & its light is faint.”

William Herschel was the first to resolve individual stars in M9 almost two decades after Messier had discovered it. Herschel observed the cluster on May 3, 1783 and, describing it as a “nebula between Eta and Rho Ophiuchi,” he noted, “With a 10-feet reflector, and a magnifying power of 250, I see several stars in it, and make no doubt a higher power, and more light, will resolve it all into stars. This seems to be a good nebula for the purpose of establishing the connection between nebulae and clusters of stars in general.” 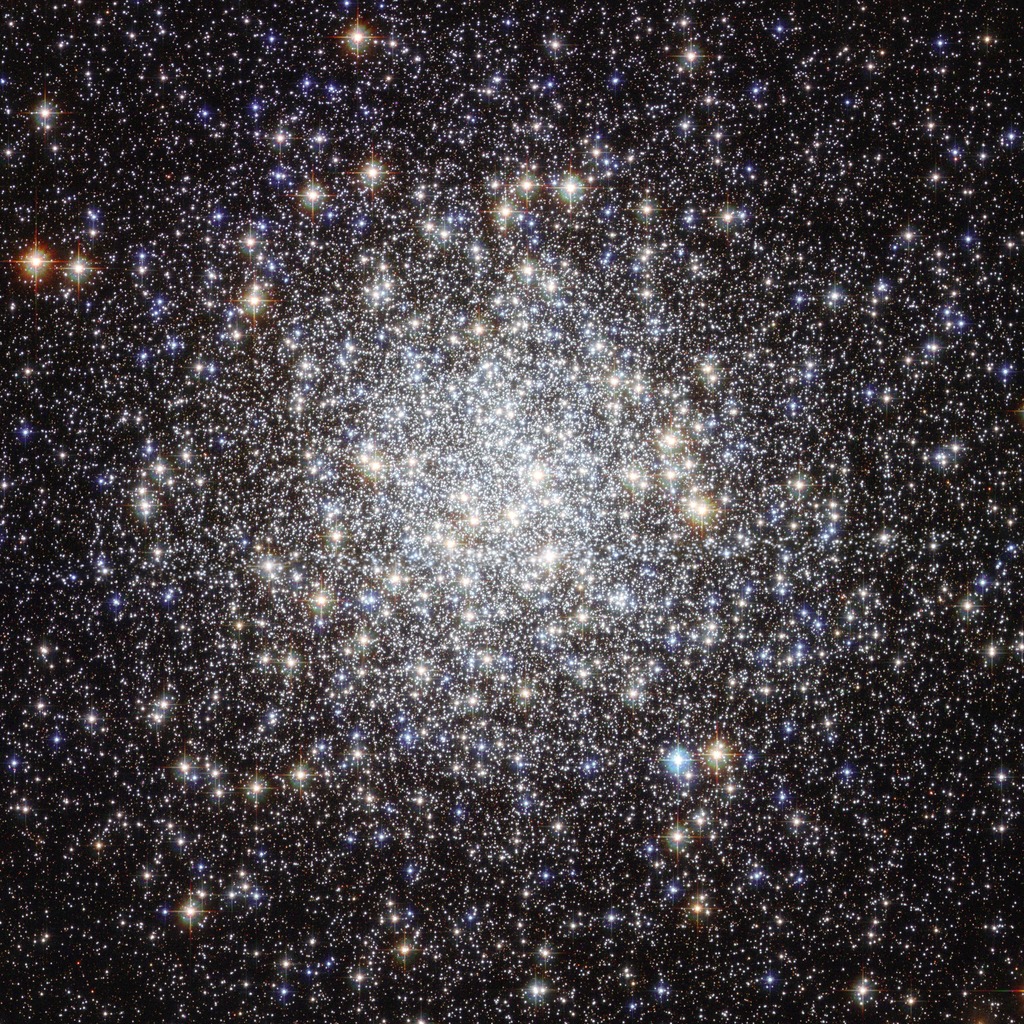 Herschel later described M9 as a “cluster of extremely compressed stars,” after seeing it in his 20-foot reflector in 1784 and 1786.

A globular galaxy-cluster, on the Serpent-bearer’s left leg, with a coarse telescopic double star in the np quadrant. This fine object is composed of a myriad of minute stars, clustering into a blaze in the centre, and wonderfully aggregated, with numerous outliers seen by glimpses. It was registered by Messier in 1764; and described by him as a nebula, “unaccompanied by any star.” The mean apparent place was carefully differentiated from Eta Ophiuchi. Sir William Herschel resolved it with his 20-foot reflector, in 1784; and he estimated its profundity as, at least, of the 344th order. He thinks it a miniature of No. 53 Messier [Messier 53]; and it is one of those which forms a capital object, for proving space-penetrating power of a telescope. It lies 3 deg to the south-east of Eta, and rather more than a quarter of the way from Antares to Altair.

Messier 9 is one of the nearest globular clusters to the centre of the Milky Way. It lies at an approximate distance of 5,500 light years from the galactic centre. As a result, it appears a bit flattened due to the gravitational influence of the Milky Way core pulling it slightly out of shape.

The cluster is moving away from us at the very high velocity of 224 km/s.

The brightest stars in M9 have a visual magnitude of 13.5 and can be seen in a medium-sized telescope.

The cluster has an overall spectral type of F2. The stars in it are about twice as old as the Sun and have a significantly different composition. They generally lack heavier elements like oxygen, iron and carbon, which are scarce in globular clusters because the stars in them formed when the universe was much younger and heavier elements were present in far smaller quantities. 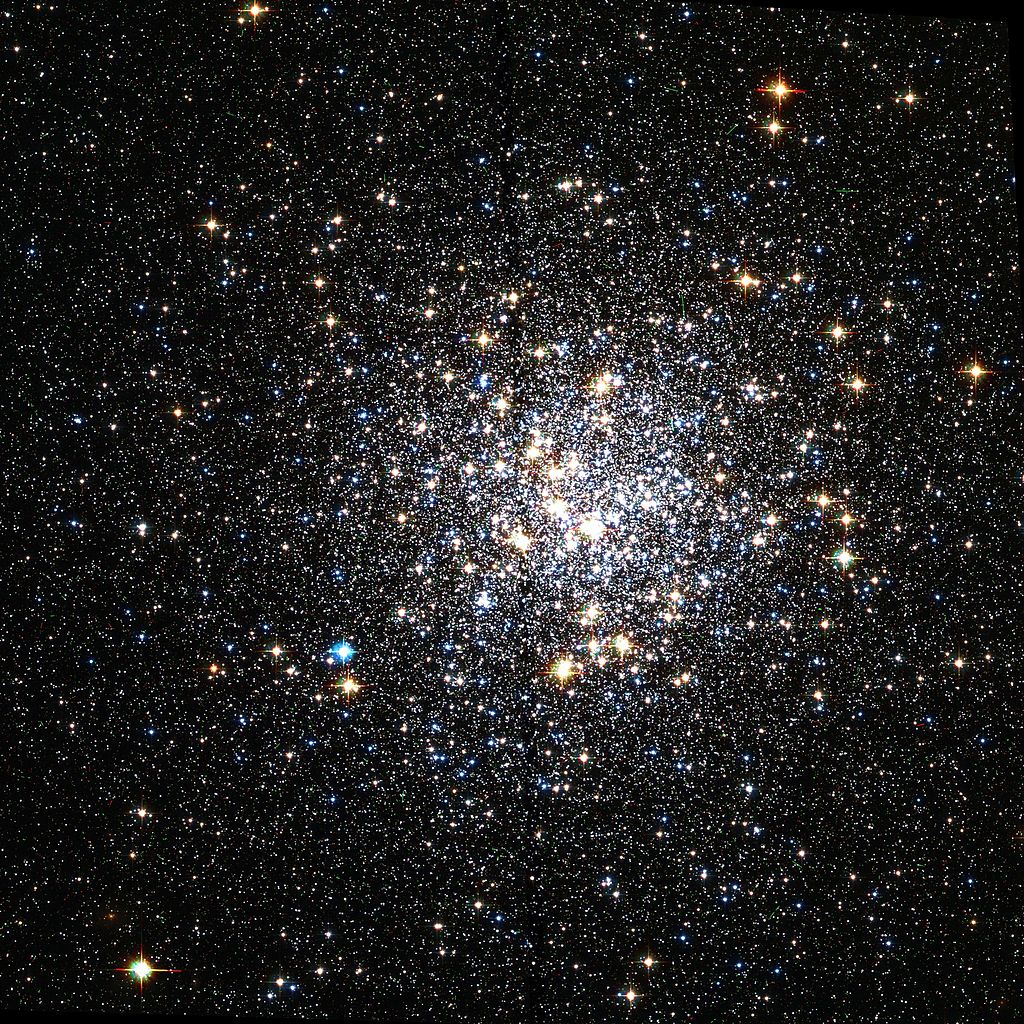 13 variable stars have been discovered in the cluster. 10 of them were found by the German astronomer Walter Baade.

Messier 9 lies at the edge of Barnard 64, a dark nebula, and the cluster’s light is obscured by interstellar dust. The core region of Barnard 64 is located about 25′ west of M9, but the nebula itself stretches almost all the way to the cluster. Another dark nebula, Barnard 259, lies to the southeast of M9. 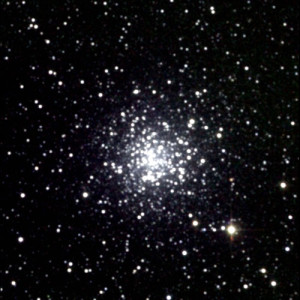 Messier 9 (NGC 6333). Atlas Image mosaic obtained as part of the Two Micron All Sky Survey (2MASS), a joint project of the University of Massachusetts and the Infrared Processing and Analysis Center/California Institute of Technology, funded by the National Aeronautics and Space Administration and the National Science Foundation.

Messier 9 can be located about 3 degrees southeast of the star Eta Ophiuchi. The star, also known by its traditional name Sabik, belongs to the spectral class A2 V and has an apparent magnitude of 2.43. It is the second brightest star in Ophiuchus.

In binoculars and small (3-inch) telescopes, M9 appears as a small, round, faint nebula. 4-inch telescopes reveal the oval shape of the cluster’s central region, spanning about 3′ in diameter.

The individual stars and the cluster’s concentrated central region appear clearly in 6-inch or larger instruments. Larger telescopes show M9 as a cluster spanning 7′ or 8′ in diameter, with the central region occupying 5′.

Messier 9 is one of the fainter Messier objects and can be a challenge for observers viewing it in binoculars because it can be difficult to make it out against the surrounding Milky Way stars.

The best time of year to observe the cluster is in the months of May, June and July. 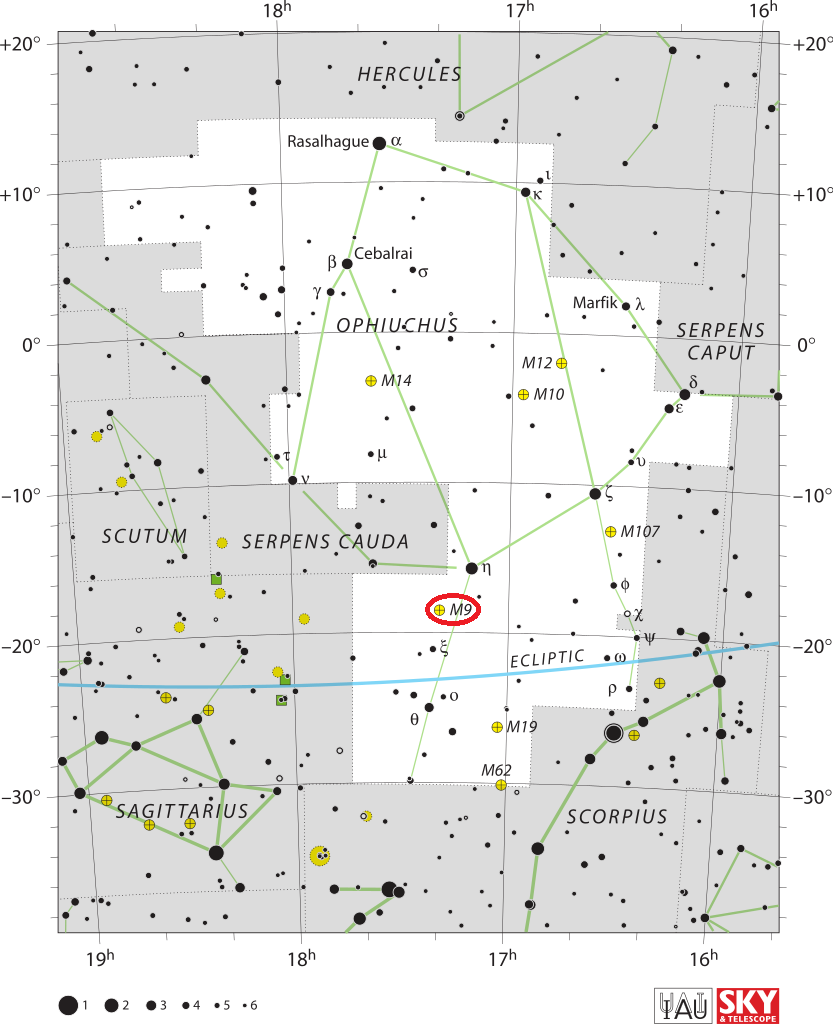