Messier 43 (M43), also known as De Mairan’s Nebula, is a star-forming region located in the constellation Orion. M43 has an apparent magnitude of 9.0 and lies at a distance of 1,600 light years from Earth. It has the designation NGC 1982 in the New General Catalogue.

De Mairan’s Nebula is part of the larger Orion Nebula (M42), a famous emission-reflection nebula located just under Orion’s Belt. M43 is separated from the main nebula by a large, dark dust lane. Both nebulae are part of the Orion Molecular Cloud Complex, a large group of emission and reflection nebulae, H II regions, dark clouds, and newly formed stars occupying several degrees of the sky between Orion’s Belt and Orion’s Sword. The complex is one of the most active star-forming regions visible in the sky.

De Mairan’s nebula lies to the north of M42 and is considerably fainter than the larger nebula. It can be seen in binoculars and small telescopes, but the smoky wisps and the dark features along its eastern border are only visible in larger instruments, starting with 8-inch telescopes.

In 10×50 binoculars, the nebula appears like an elongated patch with a bright centre. The central star can easily be seen in binoculars. The dark lane that separates M43 from M42 is revealed in small telescopes. The best time of year to observe M43 is in the winter months, when Orion is prominent in the evening sky. 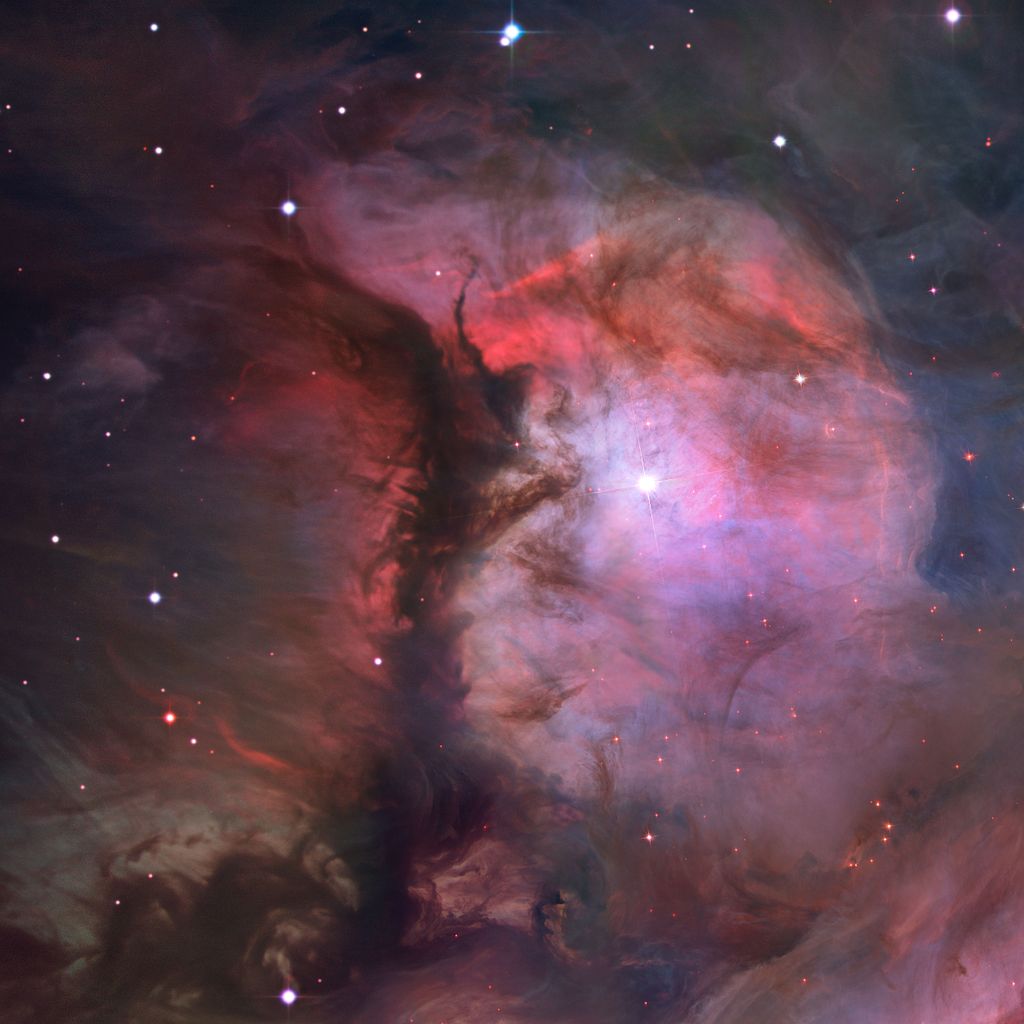 The nebula occupies an area of 20 x 15 arc minutes, corresponding to a true diameter of 9 light years.

Messier 43 surrounds the star NU Orionis (HD 37061), an irregular variable with the stellar classification B0.5 V. The star is a blue main sequence dwarf whose brightness varies from magnitude 6.5 to 7.6. 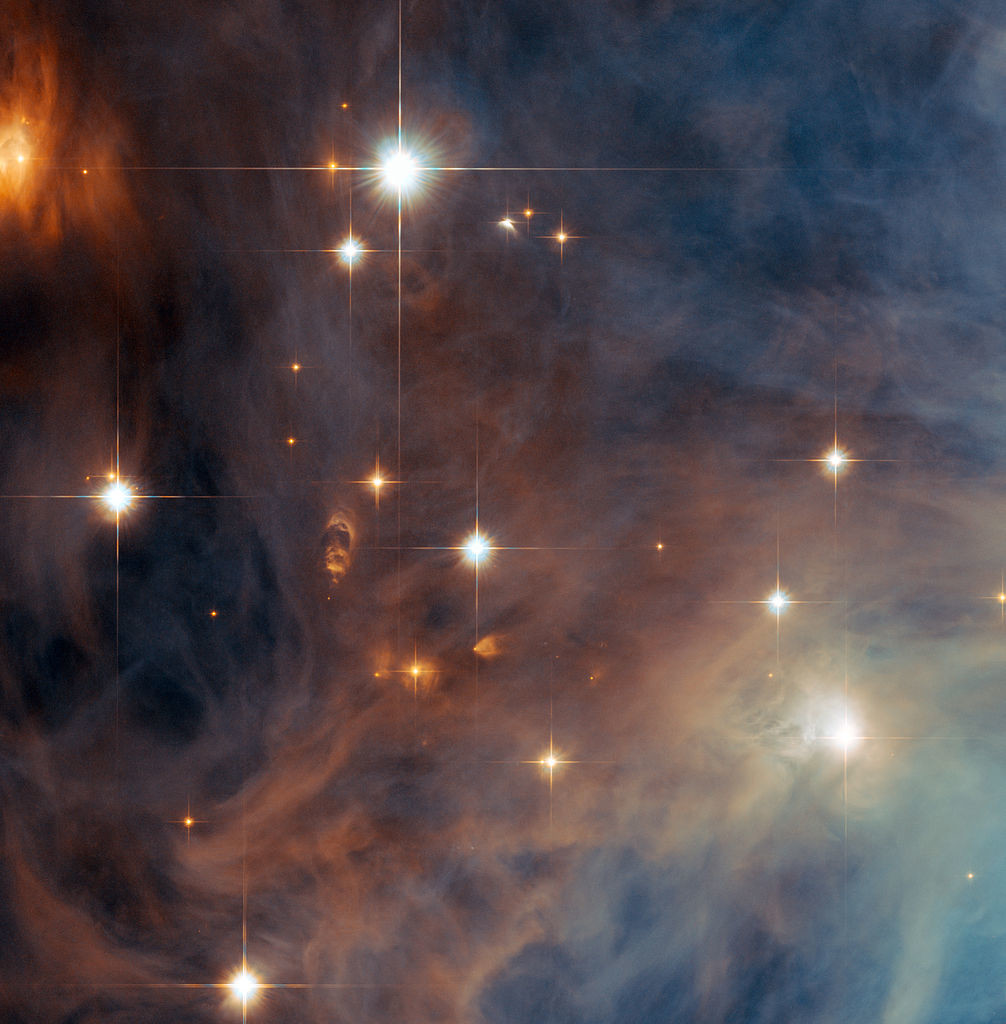 The NASA/ESA Hubble Space Telescope has taken a close-up view of an outer part of the Orion Nebula’s little brother, Messier 43. This nebula, which is sometimes referred to as De Mairan’s Nebula after its discoverer, is separated from the famous Orion Nebula (Messier 42) by only a dark lane of dust. Both nebulae are part of the massive stellar nursery called the Orion molecular cloud complex, which includes several other nebulae, such as the Horsehead Nebula (Barnard 33) and the Flame Nebula (NGC 2024). The Orion molecular cloud complex is about 1400 light-years away, making it one of the closest massive star formation regions to Earth. Hubble has therefore studied this extraordinary region extensively over the past two decades, monitoring how stellar winds sculpt the clouds of gas, studying young stars and their surroundings and discovering many elusive objects, such as brown dwarf stars. This view shows several of the brilliant hot young stars in this less-studied region and it also reveals many of the curious features around even younger stars that are still cocooned by dust.
This picture was created from images taken using the Wide Field Channel of Hubble’s Advanced Camera for Surveys. Images through yellow (F555W, coloured blue) and near-infrared (F814W, coloured red) filters were combined. The exposure times were 1000 s per filter and the field of view is about 3.3 arcminutes across. Image: ESA/Hubble & NASA

De Mairan’s Nebula was named after Jean-Jacques d’Ortous de Mairan, the French astronomer who discovered it before 1731. This is how de Mairan described the object:

Finally I will add that close to the luminous space in Orion [Messier 42], one sees the star d of Huygens [NU Orionis] currently (1731) surrounded by a brilliance very similar to that which produces, as I believe, the atmosphere of our Sun, if it were dense enough & extensive enough to be visible in Telescopes at a similar distance. See it in the form & the situation [given by] D, according to what was determined with the Reticule.

The star which is above, & has little distance from that nebula, & of which is spoken in the Traité de l’Aurore boréale [Treat of the Northern Light] by M. de Mairan is surrounded, & equally by a very thin light; the star doesn’t have the same brilliance as the four of the great nebula: its light is pale, & it appears covered by fog. I determined its position; its right ascension was 81d 3′ 0″, & its declination 5d 26′ 37″ south. 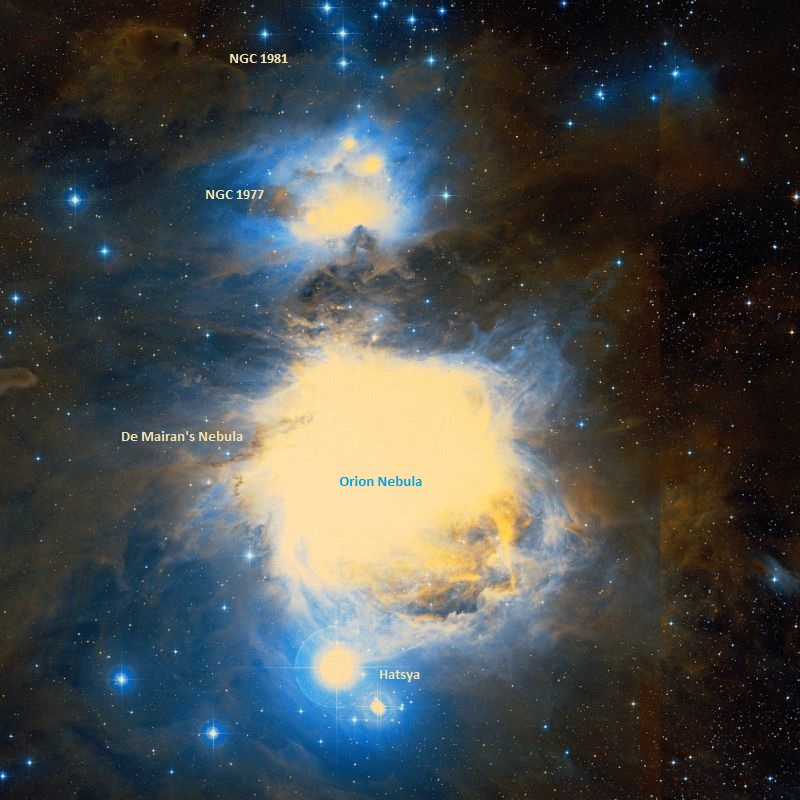 William Herschel added De Mairan’s Nebula to his catalogue as H III.1. Herschel first saw M43 on March 4, 1774 and catalogued it on November 3, 1783. He later provided the following description of the object:

In the year 1774, the 4th of March, I observed the nebulous star, which is the 43d of the Connoissance des Temps and is not many minutes north of the great nebula; but at the same time I also took notice of two similar, but much smaller nebulous stars; one on each side of the large one, and at nearly equal distance from it. (…)

In 1783, I reexamined the nebulous star, and found it to be faintly surrounded with a circular glory of whitish nebulosity, faintly joined to the great nebula.

About the latter end of the same year I remarked that it was not equally surrounded, but most nebulous toward the south.

In 1784 I began to entertain an opinion that the star was not connected with the nebulosity of the great nebula in Orion, but was one of those which are scattered over that part of the heavens.

In 1801, 1806, and 1810 this opinion was fully confirmed, by the gradual change which happened in the great nebula, to which the nebulosity surrounding this star belongs. For the intensity of the light about the nebulous star had by this time been considerably reduced, by attenuation or dissipation of nebulous matter [this observation was probably an illusion]; and it seemed now to be pretty evident that the star is far behind the nebulous matter, and that consequently its light in passing through it is scattered and deflected, so as to produce the appearance of a nebulous star [these assumptions were not correct]. A similar phenomenon may be seen whenever a planet or a star of the 1st or 2nd magnitude happens to be involved in haziness; for a diffused circular light will then be seen, to which, but in a much inferior degree, that which surrounds this nebulous star bears a great resemblance.

When I reviewed this interesting object in December 1810, I directed my attention particularly to the two small nebulous stars, by sides of the large one, and found that they were perfectly free from every nebulous appearance; which confirmed not only my former surmise of the great attenuation of the nebulosity, but also proved that their former nebulous appearance had been entirely the effect of the passage of their feeble light through the nebulous matter spread out before them [actually, these nebulous stars had probably been illusions].

The 19th of January 1811, I had another critical examination of the same object in a very clear view through the 40-feet telescope; but notwithstanding the superior light of this instrument, I could not perceive any remains of nebulosity about the two small stars, which were perfectly clear, and in the same situation, where about thirty-seven years before I had seen them involved in nebulosity.

John Herschel added M43 to the General Catalogue as GC 1185. He described it as “remarkable, very bright; very large; round, with a tail; much brighter toward the middle where there is a star of 8th or 9th magnitude.” 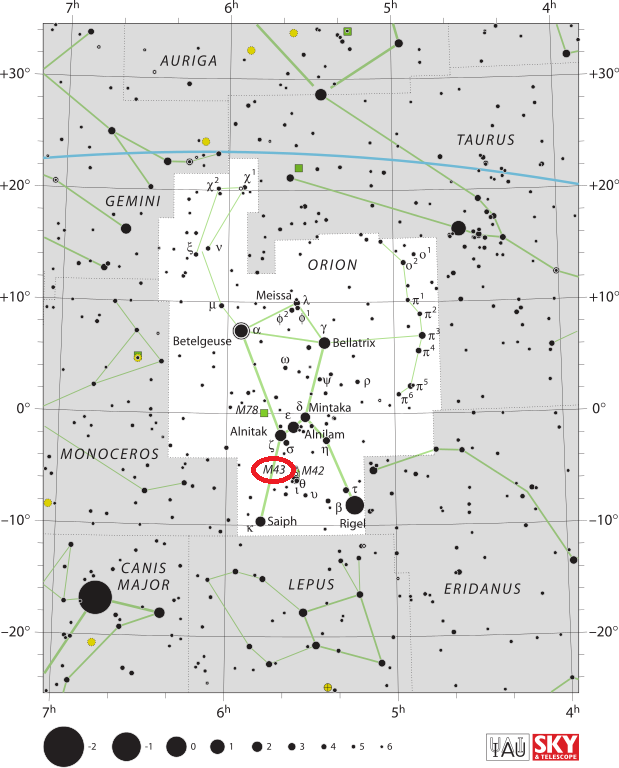