Messier 10 (M10) is a rich, bright globular cluster located in the constellation Ophiuchus. It lies at a distance of 14,300 light years from Earth and has an apparent magnitude of 6.4. Its designation in the New General Catalogue is NGC 6254.

Messier 10 lies about 16,000 light years, or 5,000 parsecs, from the galactic centre. It takes roughly 140 million years to complete an orbit around the Milky Way Galaxy. It crosses the plane of the Milky Way’s disk every 53 million years. M10 is moving away from the solar system at a velocity of 69 km/s. The cluster’s estimated mass is 200,000 solar masses.

M10 was discovered by Charles Messier on May 29, 1764. Messier added it to his catalogue as object number 10, describing it as a “nebula, without stars, in the belt of Ophiuchus; near the 30th star of that constellation, of sixth magnitude, according to Flamsteed. This nebula is beautiful & round; one can only see it with difficulty in an ordinary telescope of 3-feet [FL].” 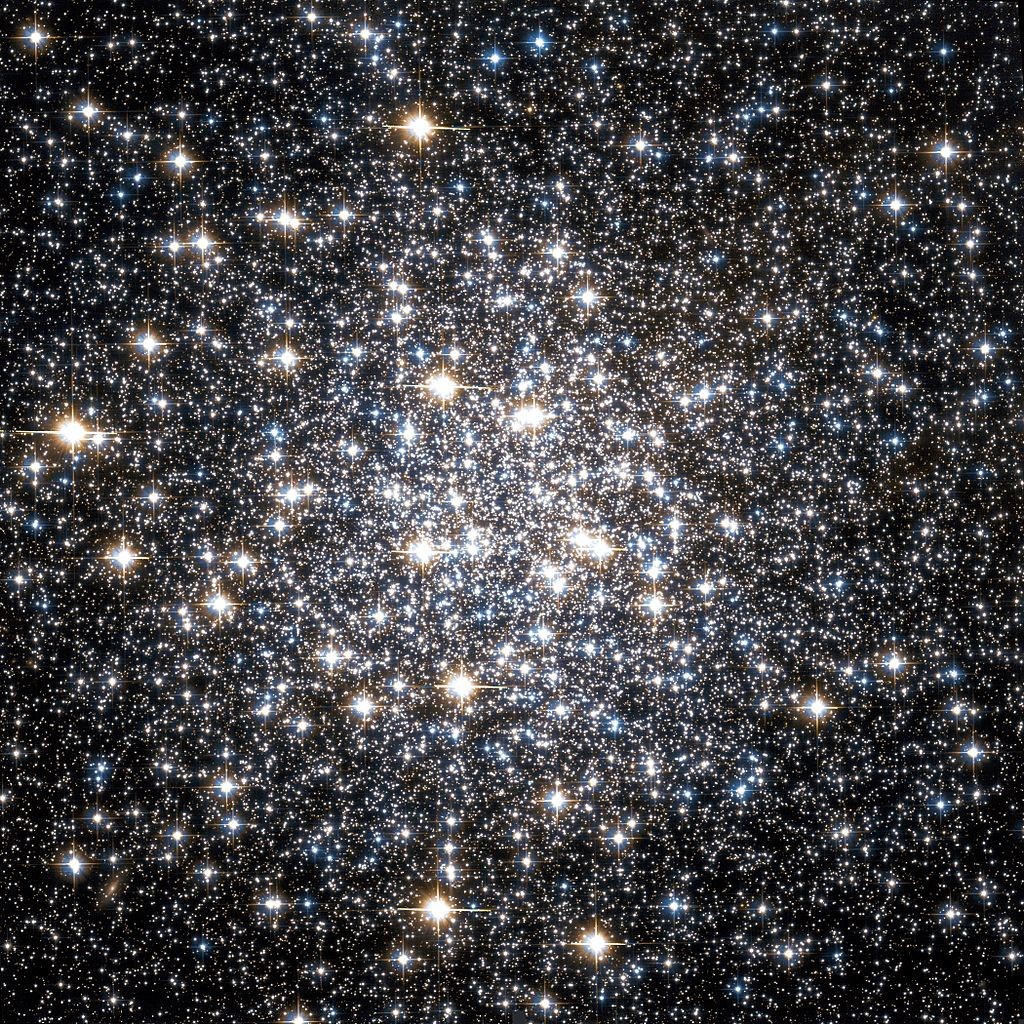 A decade later, German astronomer Johann Elert Bode provided a similar description, calling M10 a “nebulous patch without stars; very pale.” On August 14, 1774, he observed M10 and M12, another globular cluster in Ophiuchus that lies in the same field of view, and wrote: 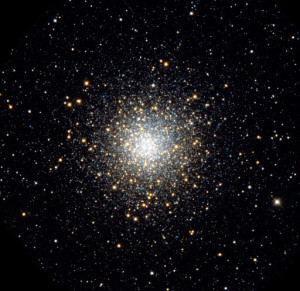 It was not until German-born British astronomer William Herschel observed the cluster with a larger telescope that M10 was resolved into individual stars and recognised as a cluster. Herchel described the object as a “beautiful cluster of extremely compressed stars,“ adding that “it resembles the 53d [Messier 53]; and the most compressed part is about 3 or 4 minutes in diameter.”

American astronomer Harlow Shapley was the first to estimate an approximate distance to M10, but his estimation of 33,000 light years placed the cluster at twice the distance of the modern estimates.

Messier 10 has a spatial diameter of 83 light years, but small telescopes (3-inch) reveal about half the cluster’s size – roughly 8 to 9 minutes of arc – and its bright central region, which spans roughly 35 light years. 6-inch or 8-inch telescopes show the cluster extending across 15.1 arc minutes and reveal a large, bright central core. Meanwhile, deep images reveal M10 to span some 20 arc minutes of apparent sky and resolve stars across the entire area of the cluster.

The cluster is about two thirds the size of the full Moon, but its outer regions are very dim. With a visual magnitude of 6.4, even the cluster’s bright core is too faint to be seen without binoculars.

Messier 10 and Messier 12 can be found about half a fistwidth west of the bright star Beta Ophiuchi, also known as Cebalrai, with Messier 10 lying a bit lower in the sky, to the south of M12. M10 lies along the line from Cebalrai to Zeta Ophiuchi, the third brightest star in Ophiuchus. It is only a degree away from 30 Ophiuchi, an orange giant star with an apparent magnitude of 4.83. 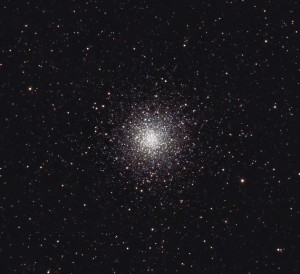 Messier 10 contains about 100,000 stars, with the core region consisting of 14 percent binary stars.

The cluster is classified as moderately metal-poor and there is evidence indicating that it is enriched by elements produced in Type II supernovae and the s-process (slow-neutron-capture process) in massive stars. The stars in M10 have only 3.5 percent of the heavy elements found in the Sun, pointing to an age of 11.4 billion years. This makes M10 one of the younger globular clusters known.

The central region of M10 contains many blue stragglers, stars formed 2-5 billion years ago that look younger than they are because they are bluer and more luminous than their neighbours. The phenomenon is believed to be a result of interactions between two or more stars in the dense, compact central regions of globular clusters. Four variable stars have been discovered in M10.

The cluster’s core will be the last part to survive and will likely be around for another 15 to 20 billion years. It will eventually be torn apart by gravitational forces of the Milky Way as it keeps passing through the galactic disk. 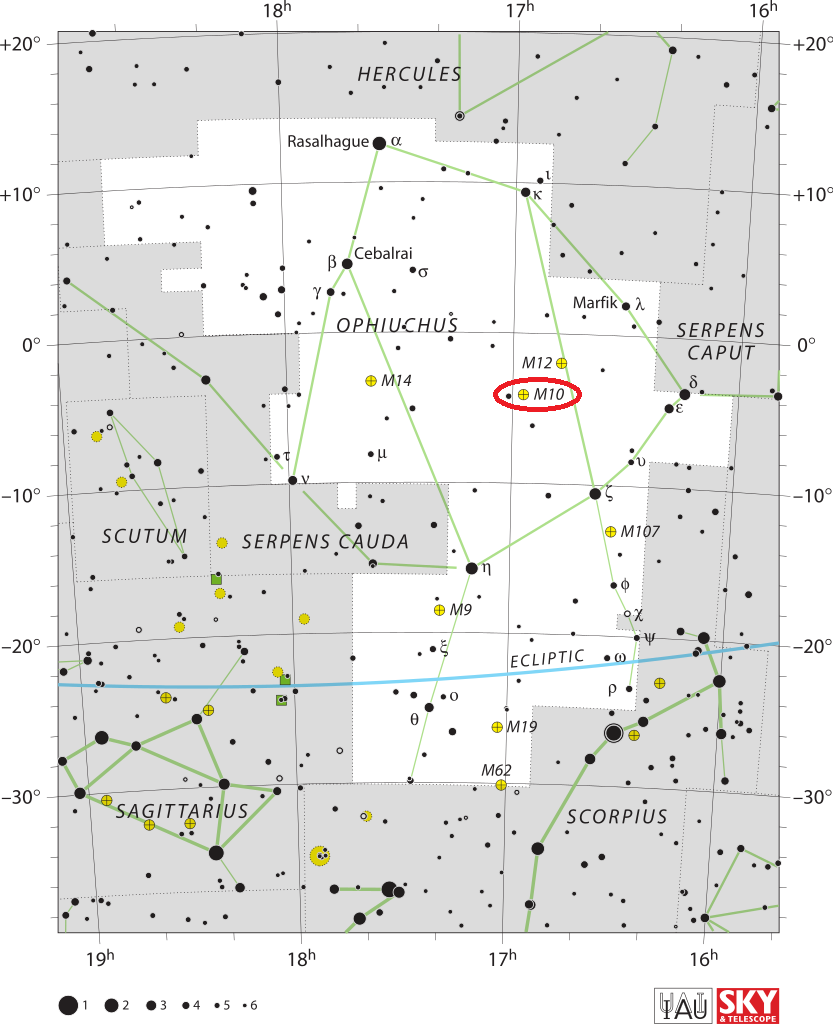 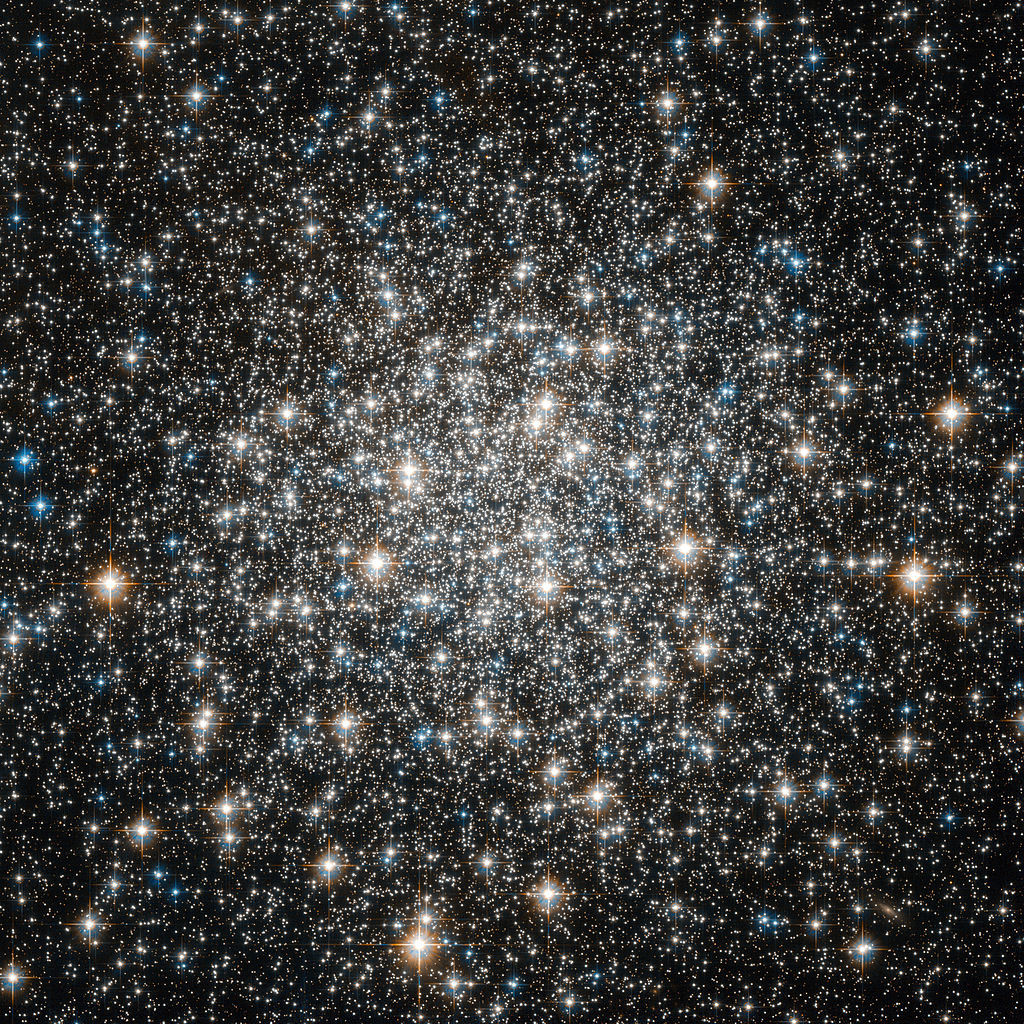 Messier 10. Like many of the most famous objects in the sky, globular cluster Messier 10 was of little interest to its discoverer: Charles Messier, the 18th century French astronomer, catalogued over 100 galaxies and clusters, but was primarily interested in comets. Through the telescopes available at the time, comets, nebulae, globular clusters and galaxies appeared just as faint, diffuse blobs and could easily be confused for one another. Only by carefully observing their motion — or lack of it — were astronomers able to distinguish them: comets move slowly relative to the stars in the background, while other more distant astronomical objects do not move at all. Messier’s decision to catalogue all the objects that he could find and that were not comets, was a pragmatic solution which would have a huge impact on astronomy. His catalogue of just over 100 objects includes many of the most famous objects in the night sky. Messier 10, seen here in an image from the NASA/ESA Hubble Space Telescope, is one of them. Messier described it in the very first edition of his catalogue, which was published in 1774 and included the first 45 objects he identified.
Messier 10 is a ball of stars that lies about 15 000 light-years from Earth, in the constellation of Ophiuchus (The Serpent Bearer). Approximately 80 light-years across, it should therefore appear about two thirds the size of the Moon in the night sky. However, its outer regions are extremely diffuse, and even the comparatively bright core is too dim to see with the naked eye.
Hubble, which has no problems seeing faint objects, has observed the brightest part of the centre of the cluster in this image, a region which is about 13 light-years across. This image is made up of observations made in visible and infrared light using Hubble’s Advanced Camera for Surveys. The observations were carried out as part of a major Hubble survey of globular clusters in the Milky Way. Image: ESA/Hubble & NASA