Messier 28 (M28) is a class IV globular star cluster located in the constellation Sagittarius. The cluster has an apparent magnitude of 7.66 and lies at a distance of 17,900 light years, or 5,500 parsecs, from Earth. Its designation in the New General Catalogue is NGC 6626.

Messier 28 is quite easy to find in the sky as it lies less than a degree northwest of Kaus Borealis, one of the bright stars forming the Teapot asterism in Sagittarius. However, as M28 is not particularly bright, it is invisible to the naked eye and only appears as a faint patch of light in binoculars.

Small telescopes will show a nebulous object occupying an area of 11.2 arc minutes in apparent diameter, while medium-sized and larger telescopes will reveal the cluster’s bright core and resolve the stars.

Individual stars can only be seen in 4-inch and larger instruments.

Messier 28 is considerably smaller than the neighbouring Messier 22. It is a class IV globular cluster, which means that it has intermediate rich concentrations of stars and that the stellar density at the core region is visible, but slightly spread out. 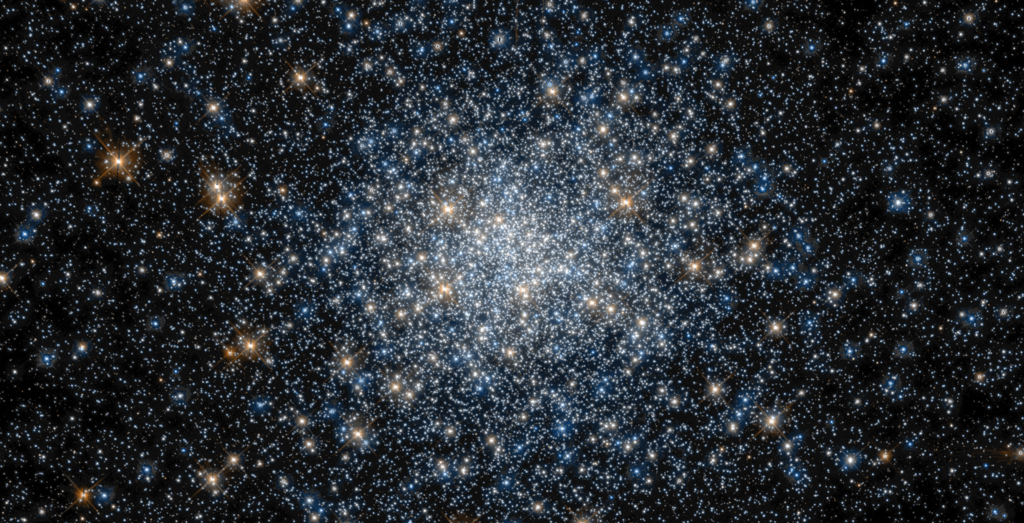 Messier 28. Image based on observations made with the NASA/ESA Hubble Space Telescope, and obtained from the Hubble Legacy Archive, which is a collaboration between the Space Telescope Science Institute (STScI/NASA), the Space Telescope European Coordinating Facility (ST-ECF/ESA) and the Canadian Astronomy Data Centre (CADC/NRC/CSA).

The cluster’s dense, concentrated core covers 2 arc minutes of apparent sky, while its halo spans about 4 arc minutes. The estimated age of M28 is 12 billion years.

The brightest stars in M28 are magnitude 15. The cluster contains 18 RR Lyrae variable stars, periodic variables that are used to measure galactic distances. These stars are commonly found in globular clusters. 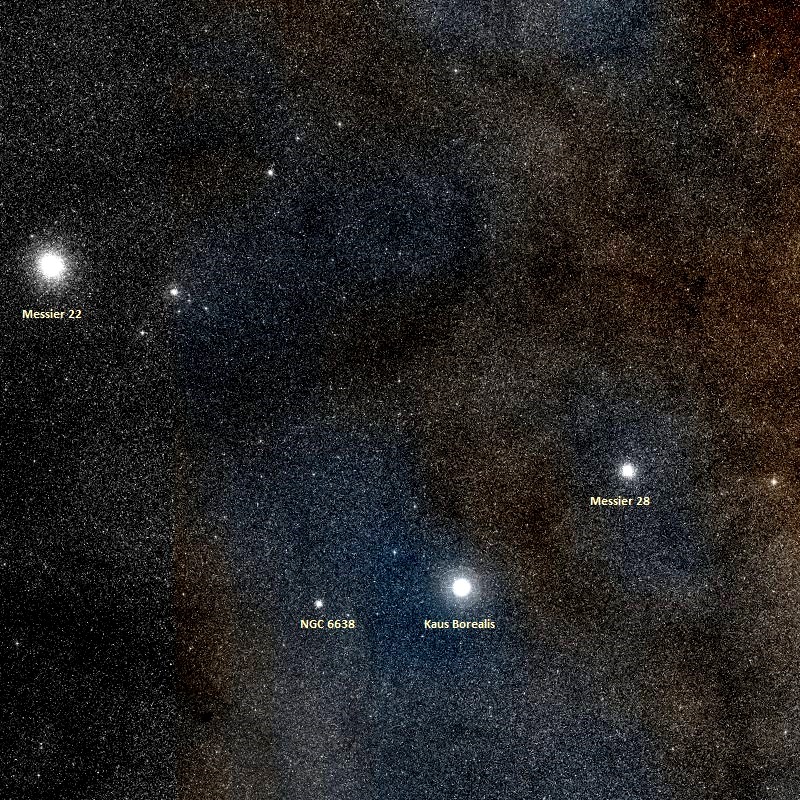 Additionally, M28 contains a suspected RV Tauri variable and a confirmed W Virginis variable with a pulsation period of 17 days. W Virginis variables are old, low-mass, metal-poor population II stars that exhibit variations in brightness because their instability causes their size to change. W Virginis stars are a subclass of Type II Cepheids and can be used to establish distances to celestial objects. 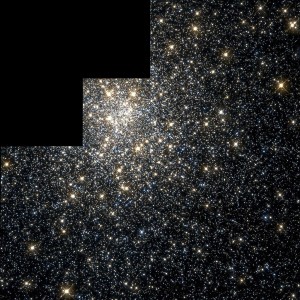 Messier 28 was the first globular cluster discovered to contain a millisecond pulsar, a pulsating, highly magnetized rotating neutron star emitting a beam of electromagnetic radiation with a rotational period between 1 and 10 milliseconds.

The pulsar, catalogued as PSR B1821–24, was discovered in 1986 using the Lovell Telescope, a radio telescope at Jodrell Bank Observatory in Cheshire, England.

Researchers later discovered 11 more millisecond pulsars in the same area, which makes M28 a cluster with the third largest population of pulsars, after the globular clusters Terzan 5, also located in Sagittarius, and 47 Tucanae in Tucana constellation.

Messier 28 was one of Charles Messier’s original discoveries. The comet hunter first observed the cluster on July 27, 1764 and added it to his catalogue. He wrote:

In the night of the 26th to the 27th of the same month, I have discovered a nebula in the upper part of the bow of Sagittarius, at about 1 degree from the star Lambda of that constellation, & little distant from the beautiful nebula which is between the head & the bow [Messier 22]: that new one may be the third of the older one, & doesn’t contain any star, as far as I have been able to judge when examining it with a good Gregorian telescope which magnifies 104 times: it is round, its diameter is about 2 minutes of arc; one sees it with difficulty with an ordinary refractor of 3 feet & a half of length. I have compared the middle [of it] with the star Lambda Sagittarii, & I have concluded its right ascension of 272d 29′ 30″, & its declination of 37d 11′ 57″ south.

William Herschel was able to resolve the cluster’s stars more than three decades later. On August 1, 1799, he noted, “It may be called insulated though situated in a part of the heavens that is very rich in stars. It may have a nucleus, for it is much compressed towards the centre, and the situation is too low for seeing it well. The stars of the cluster are pretty numerous.” 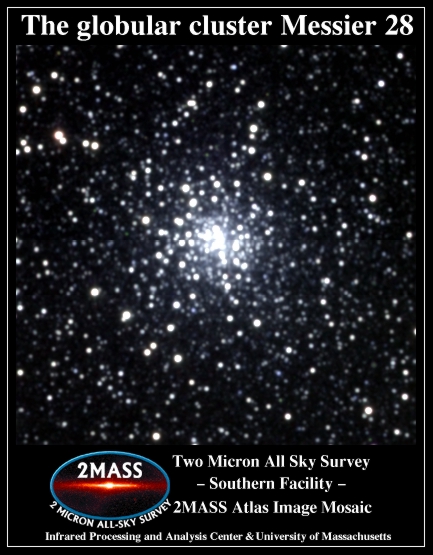 Messier 28 (NGC 6626). Atlas Image mosaic obtained as part of the Two Micron All Sky Survey (2MASS), a joint project of the University of Massachusetts and the Infrared Processing and Analysis Center/California Institute of Technology, funded by the National Aeronautics and Space Administration and the National Science Foundation.

John Herschel, who catalogued the cluster as h 2010, described it as “not very bright; but very rich, excessively compressed globular cluster; stars of 14th to 15th magnitude; much brighter toward the middle; a fine object.”

A compact globular cluster of very minute stars, between the Archer‘s head and his bow. It is not very bright; and is preceded by two telescopic stars in a vertical line. Messier, who enrolled it in 1764, describes it as a nebula without a star, and seen with difficulty in his 3 1/2 foot [FL] telescope. But Sir William Herschel resolved it, and placed it among the stellar clusters; his son [John Herschel] recommended it as a testing-object for trying the space-penetrating powers of telescopes. 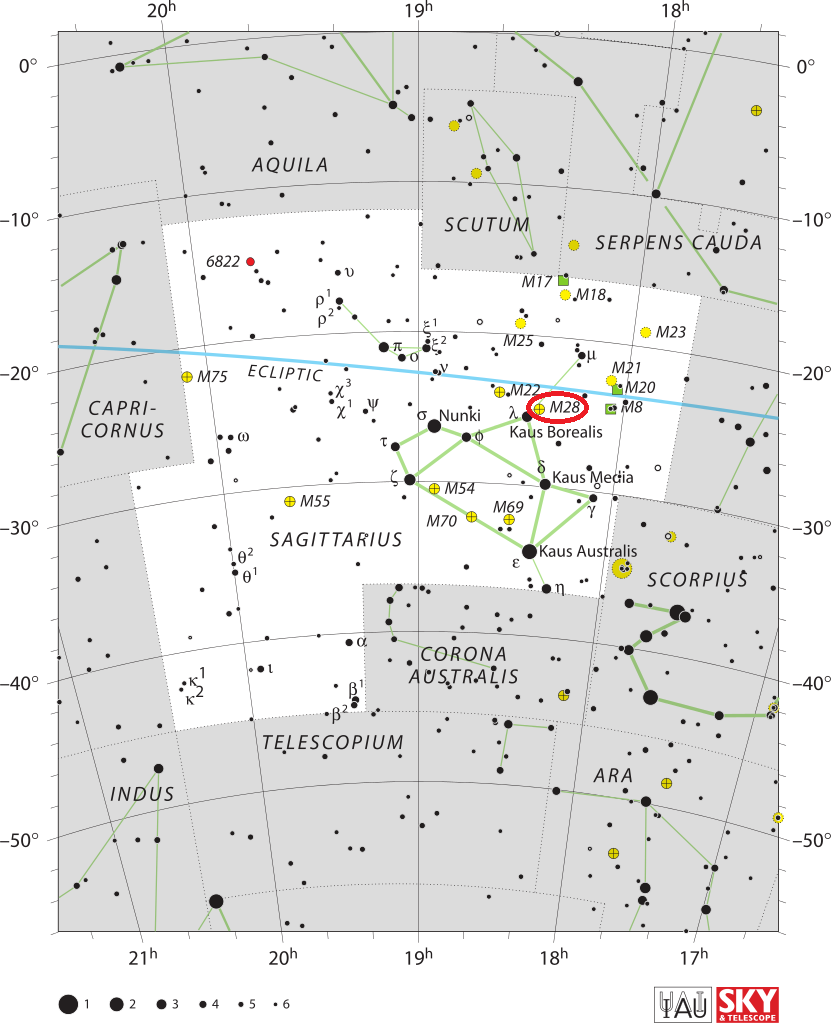