Messier 103 (M103) is an open star cluster located in the northern constellation Cassiopeia. The cluster lies at a distance of 10,000 light years from Earth and has an apparent magnitude of 7.4. Its designation in the New General Catalogue is NGC 581.

M103 occupies an area 6 arc minutes in apparent size, corresponding to a linear diameter of 17.5 light years. It is easy to see, even with binoculars, and appears as a nebulous fan-shaped patch. 4-inch telescopes resolve the four brightest stars in the cluster. Large telescopes resolve more stars across the cluster, but make it harder to make out M103 from the surrounding star field because the cluster is quite loose.

Messier 103 is easy to find because it lies within Cassiopeia’s W asterism. It can be located 1 degree east of Ruchbah, Delta Cassiopeiae, the bottom left star of the W. It lies near the line connecting Ruchbah and Segin, Epsilon Cassiopeiae, the upper left star of the W. The best time of year to observe M103 is during the winter, but northern observers can see it at any time of year. The cluster is circumpolar and never sets below the horizon north of latitude 30N. 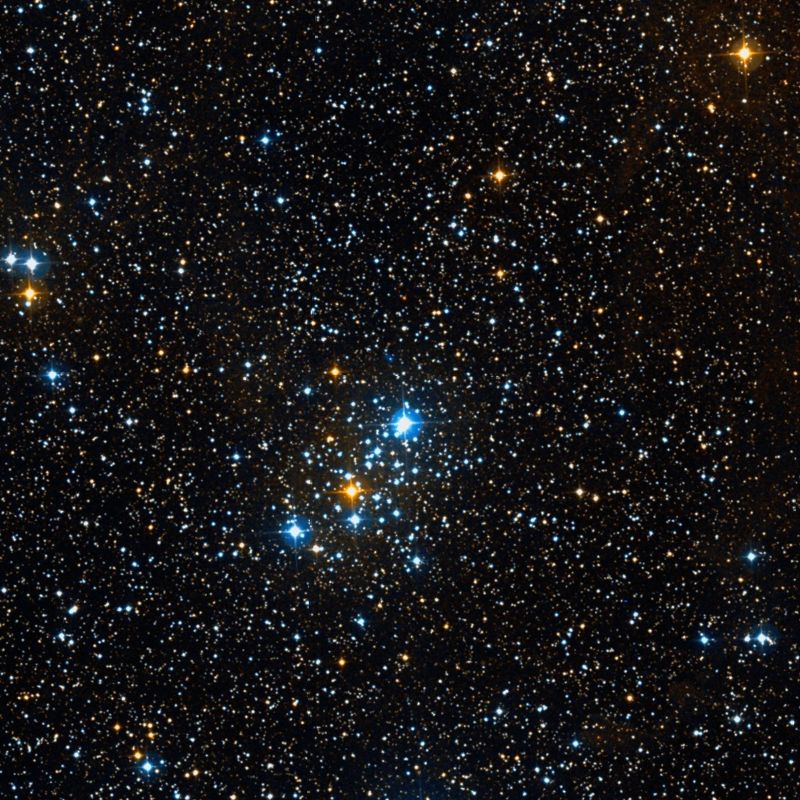 There are several other open clusters located in this area of the sky, including NGC 654, NGC 659 and NGC 663, the last of which is sometimes confused with M103.

Messier 103 is one of the smallest and most remote open clusters known. It contains 172 confirmed members. The brightest stars in the cluster have a visual magnitude of 10.5 and belong to spectral classes B5 Ib and B2 III, which means that they are a supergiant and giant star, both white-blue in colour. Most of the cluster’s brightest members are young, hot, blue stars. At the centre of the cluster, there is a prominent red giant with a visual magnitude of 10.8. The star is classified as belonging to the spectral class M6 III or gM6.

Struve 131, a 7th magnitude multiple star system, dominates the cluster, but is not a member and only appears in the same line of sight. The triple star lies in the foreground and is much closer to us than M103. The primary component in the system is a blue supergiant. 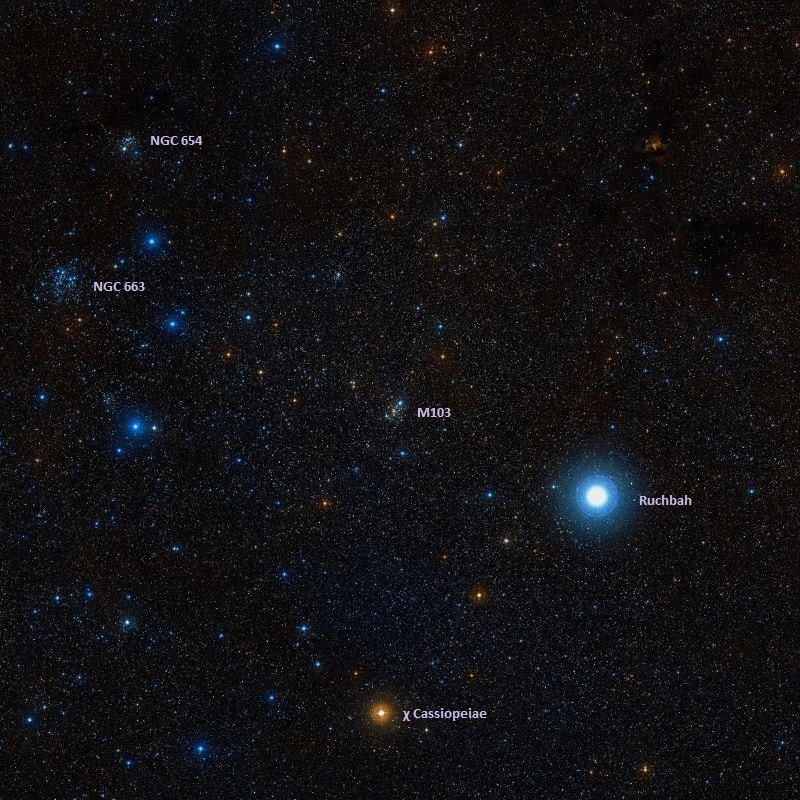 Messier 103 was discovered by the French astronomer Pierre Méchain in March or April 1781. Méchain described the object as a “cluster of stars between Epsilon & Delta of the leg of Cassiopeia.”

Along with the galaxies M101 and M102, M103 was one of the last minute additions to the Messier catalogue. Messier did not get a chance to observe and verify Méchain’s three discoveries before publication. M103 was the last object to be entered by Messier himself. The Sombrero Galaxy (M104) and the remaining Messier objects (M105 to M110) were added to the catalogue much later, in the 20th century.

14 or 16 pL. [pretty large] stars with a great many eS. [extremely small] ones. Two of the large ones are double, one of the 1st the other of the 2nd class. The compound eye glass shows a few more that may be taken into the cluster so as to make them about 20. I exclude a good many straggling ones, otherwise there would be no knowing where to stop.

One of the two “large” (bright) stars Herschel mentions is Struve 131. 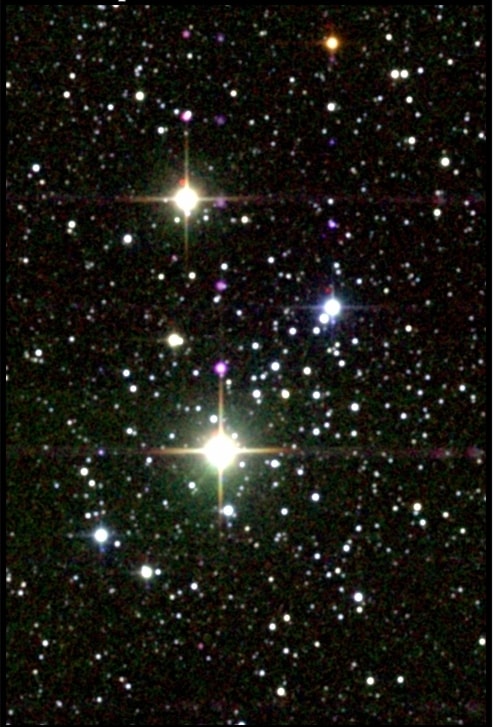 Messier 103. Atlas Image obtained as part of the Two Micron All Sky Survey (2MASS), a joint project of the University of Massachusetts and the Infrared Processing and Analysis Center/California Institute of Technology, funded by the National Aeronautics and Space Administration and the National Science Foundation.

John Herschel catalogued the cluster as h 126 and later added it to the General Catalogue as GC 341. He described the object as a “cluster; bright; round; rich; pretty large; stars of 10th and 11th magnitude.”

A neat double star in a cluster, on Cassiopeia‘s knee, about a degree to nf of Delta. A 7 [7th magnitude], straw coloured; B 9, dusky blue. This is a fan-shaped group, diverging from a sharp star in the nf quadrant. The cluster is brilliant from the splash of a score of its largest members, the four principle ones of which are from the 7th to the 9th magnitude; and under the largest, in the sf, is a red star of the 8th magnitude, which must be that mentioned by JH [John Herschel], No. 126 of his Catalogue of 1833.

My attention was first drawn to this object, by seeing it among Stuve’s acervi; but I soon found that it was also the 103 which Messier describes so vaguely, as being between Delta and Epsilon Cassiopeiae, whereas it is pretty close to Delta, on the Lady‘s knee.

Harlow Shapley classified M103 as type d, a loose and poorly populated open cluster. Shapley had originally thought M103 to be an accidental line-of-sight grouping of stars that were not physically related.