Messier 19 (M19) is a globular cluster located in the southern constellation Ophiuchus. The cluster has an apparent magnitude of 7.47 and lies at a distance of 28,700 light years, or 8,800 parsecs, from Earth. It has the designation NGC 6273 in the New General Catalogue.

Messier 19 is one of the most oblate known globulars. It has a distinctly elongated shape in the north-south direction. The oblate appearance may not accurately reflect the cluster’s physical shape because of the intervening dust and gas along the eastern edge of M19. The flattening is far less noticeable in infrared images.

Messier 19 is a class VIII globular cluster, which means that it is loosely concentrated toward the centre. The cluster is quite rich and dense, and it occupies an area 17 arc minutes in apparent diameter, corresponding to a linear diameter of 140 light years.

The cluster lies close to the galactic centre, at a distance of only about 6,500 light years, or 2,000 parsecs, which puts it on the other side of the Milky Way centre from our solar system. (The Sun is about 25,000 to 28,000 light years distant from the rotational centre of the galaxy and M19 is 28,700 light years away from the Sun.) 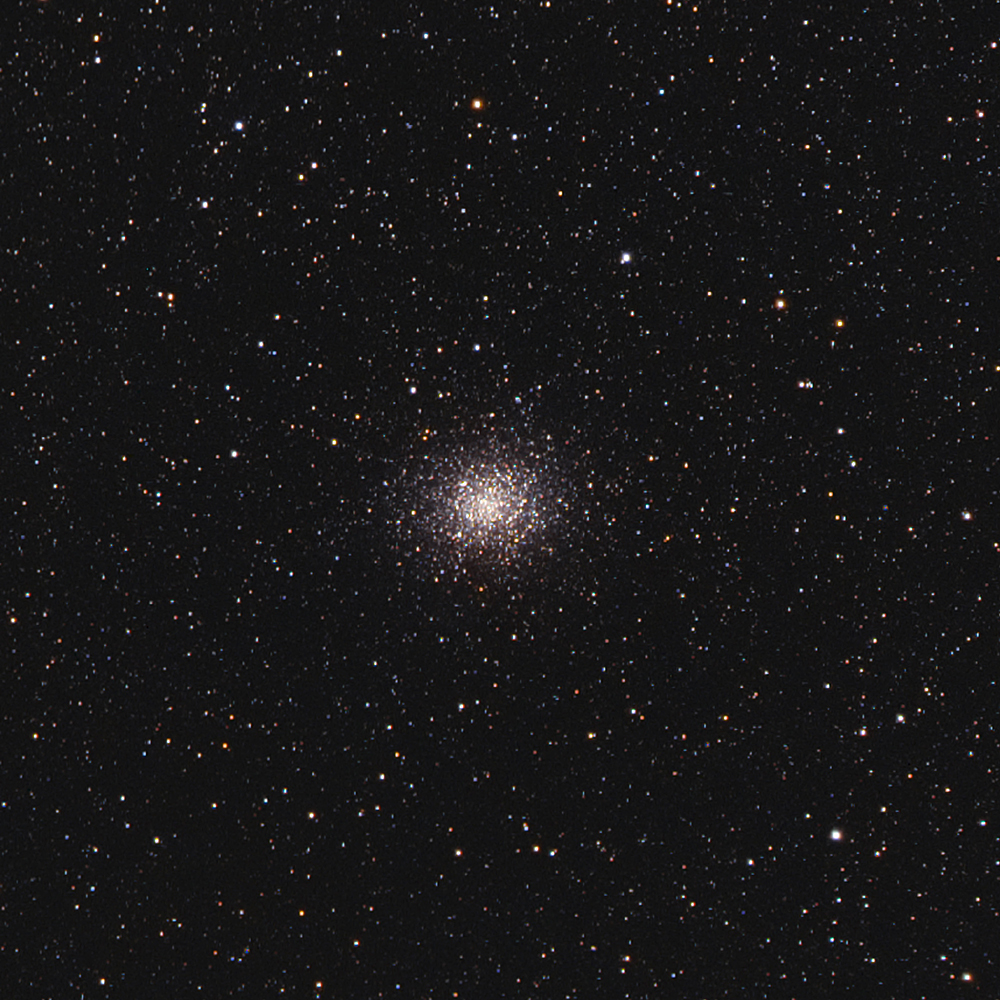 The tidal forces of the galactic centre could explain why M19’s shape deviates from that of a globular cluster. The cluster has a mass about 1.1 million times that of the Sun and its estimated age is about 11.9 billion years. It is receding from us at 146 km/s.

Messier 19 is located 4.5 degrees to the west-southwest of Theta Ophiuchi, a relatively bright multiple star system in the southern part of Ophiuchus constellation, marking the celestial serpent bearer’s right foot. Theta Ophiuchi has the spectral classification B2 IV and an apparent magnitude of 3.26. 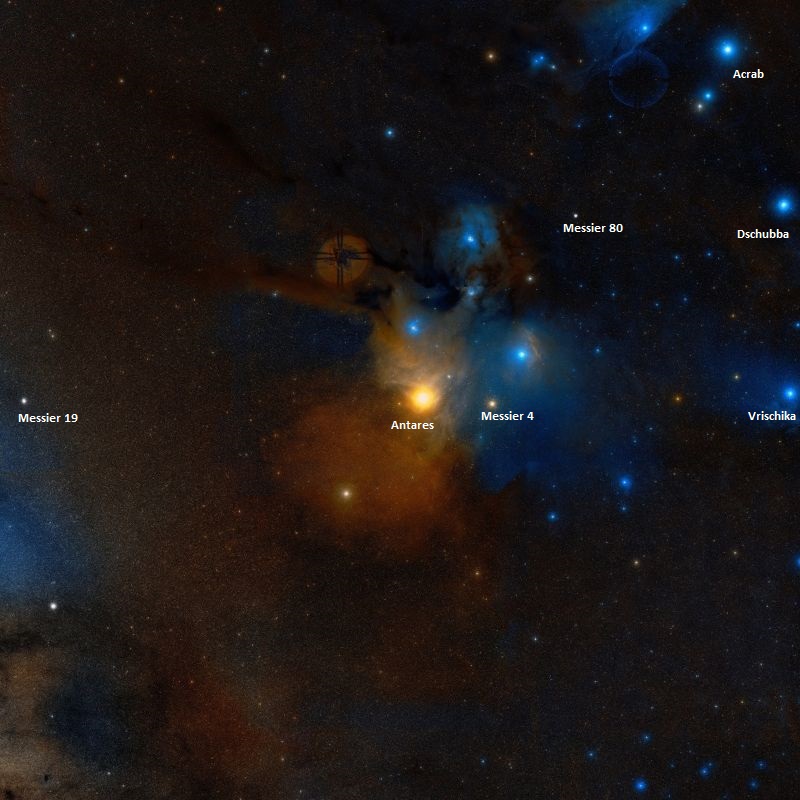 The cluster lies about 8 degrees east of Antares, the brightest star in Scorpius constellation, or roughly a fourth of the way from Antares to Kaus Borealis, the bright star that marks the tip of the Teapot asterism in Sagittarius.

Messier 19 appears as a fuzzy patch of light in 2-inch binoculars. Amateur telescopes will show a cluster about 6 arc minutes in size visually and 13.5 arc minutes photographically. The cluster’s elliptical shape is evident even in small instruments. A 10-inch telescope, on the other hand, will reveal the cluster’s bright core about 3 by 4 arc minutes in apparent size and a halo occupying a region 5 by 7 arc minutes in size. The best time of year to see the cluster is in the summer months.

Messier 19 contains a number of variable stars, including four Cepheids and RV Tauri type stars, and at least one RR Lyrae type variable with a known pulsation period. The cluster has four confirmed RR Lyrae variables.

Charles Messier discovered the cluster on June 5, 1764 and included it in his list of comet-like objects.

He described it as a “nebula without stars, on the parallel of Antares between Scorpius and the right foot of Ophiuchus: this nebula is round; one can see it very well with an ordinary telescope of 3.5-foot [FL]; the nearest neighboring known star to this nebula is 28 Ophiuchi, which is of mag. 6, according to Flamsteed. (diam. 3′)“

His entry in the first Messier catalogue (1771) read:

In the night of June 5 to 6, 1764, I have discovered a nebula, situated on the parallel of Antares, between Scorpius and the right foot of Ophiuchus: that nebula is round & doesn’t contain any star; I have examined it with a Gregorian telescope which magnified 104 times, it is about 3 minutes of arc in diameter: one sees it very well with an ordinary [non-achromatic] refractor of 3 feet & a half [FL]. I have observed its passage of the Meridian, & compared it with that of the star Antares; I have determined the right ascension of that nebula of 252d 1′ 45″, & its declination of 25d 54′ 46″ south. The known star closest to that nebula is the 28th of the constellation Ophiuchus, after the catalog of Flamsteed, of sixth magnitude

William Herschel was the first to dissolve the cluster into individual stars. In 1783, he observed M19 in a 10-foot telescope and noted, “With 250, I can see 5 or 6 stars,a nd all the rest appears mottled like other objects of its kind, when not sufficiently magnified or illuminated.”

In 1784, Herschel identified the object as a cluster after observing it in a 20-foot telescope. He described M19 as a “cluster of very compressed stars, much accumulated in the middle; 4 or 5 minutes diameter.”

The globular cluster Messier 19. Image: Two Micron All Sky Survey (2MASS), a joint project of the University of Massachusetts and the Infrared Processing and Analysis Center/California Institute of Technology, funded by the National Aeronautics and Space Administration and the National Science Foundation.

Admiral William Henry Smyth observed the cluster in July 1835 and reported the following:

A fine insulated globular cluster, of small [faint] and very compressed stars, between the Scorpion‘s back and the left foot of Ophiuchus; and nearly midway between two telescopic stars, in the preceding branch of the Via Lactea [Milky Way]. It is of a creamy white tinge, and is slightly lustrous in the centre; but H. [John Herschel] tells us, that even in the 20-foot reflector it did not brighten to a blaze, or to a confusion of the stars with another. It was discovered by M. [Messier] in 1764, and described as a nebula without stars, of a round form, and seen well with a 3 1/2-foot telescope; but in 1784, Sir William Herschel resolved it, and pronounced its profundity to be of the 344th order. The mean apparent place is obtained by differentiation with 36 Ophiuchi, from which it is 2deg 1/2 distant on a line west-by-north; and it is 7deg 1/2 due east from Antares.

The above nebulae [M62 and M19], and the whole vicinity, afford a grand conception of the grandeur and richness even of the exterior creation; and indicate the beautious gradation and variety of the heaven of heavens. Truly has it been said, “Stars teach us as well as shine.” This is near the large opening or hole, about 4deg broad, in the Scorpion’s body, which WH found almost destitute of stars. 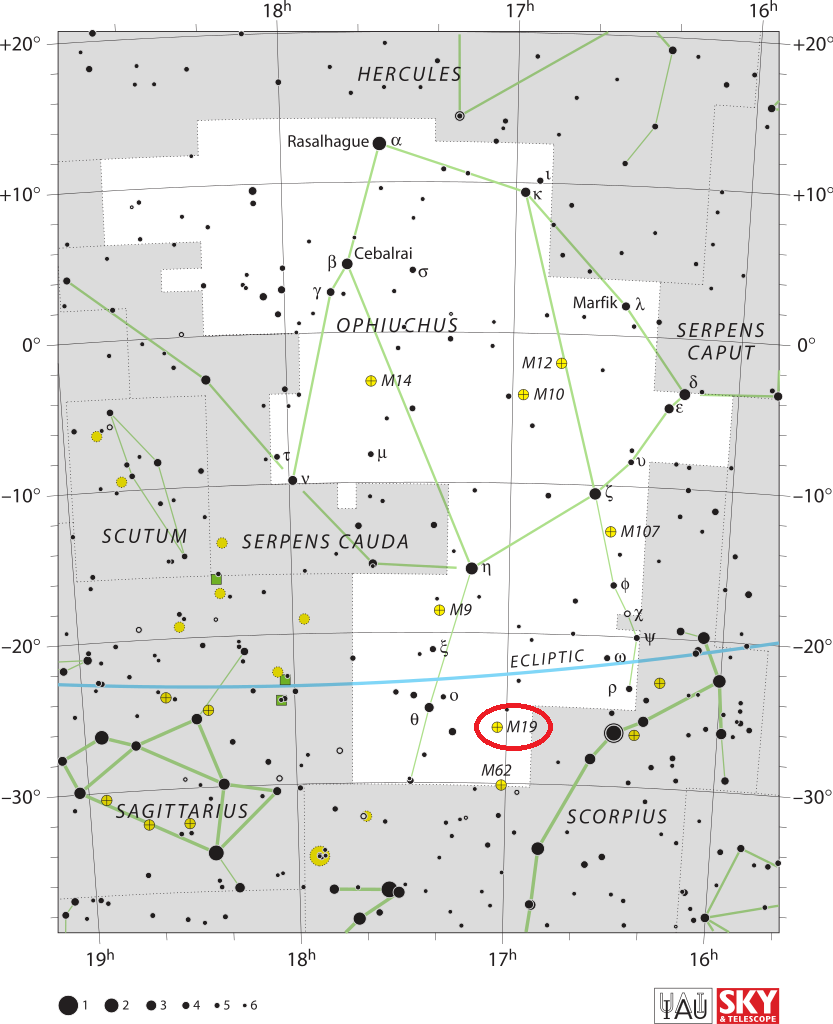