Messier 62 (M62) is a globular star cluster located in the southern constellation Ophiuchus. The cluster has an apparent magnitude of 7.39 and lies at an approximate distance of 22,200 light years from Earth. It has the designation NGC 6266 in the New General Catalogue.

The cluster occupies an area of 15 arcminutes of apparent sky, roughly half the size of the full Moon. This corresponds to a linear diameter of about 100 light years. Visually, M62 appears a bit smaller, covering an area of about 8 to 10 arc minutes.

The cluster can also be located using Wei, Epsilon Scorpii, a fainter star just to the southeast of Antares. M62 lies 4.75 degrees northeast of the star.

Messier 62 appears as a small hazy patch in binoculars, while small telescopes reveal a comet-like shape. The cluster’s stars can only be resolved in larger instruments, starting with 8-inch telescopes, which begin to resolve the cluster’s outer regions. The best time of year to observe M62 is during the summer. The cluster can be a tricky target for northern observers as it never rises very high above the southern horizon. 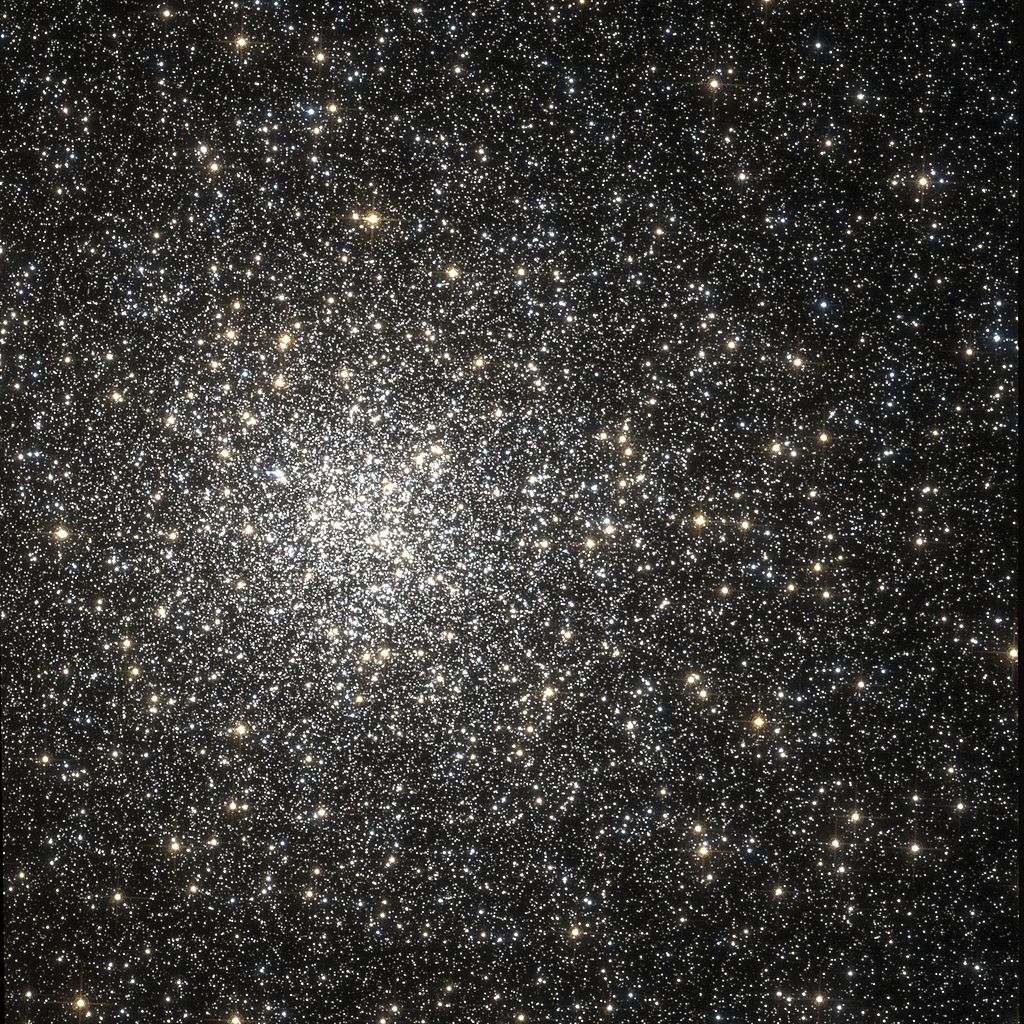 Messier 62 has a highly irregular shape for a globular cluster, with its central condensation displaced from the core region. This may be a result of the cluster lying near the galactic centre and being deformed by tidal forces. M62 lies only about 6,100 light years from the centre of the Milky Way and is one of the closest globular clusters listed in Messier’s catalogue to the galactic centre. It has an estimated mass of about 1 million times that of the Sun.

Messier 62 has the density classification IV, which means that its core is quite dense. Only clusters classified I, II and III have a stronger central concentration. The cluster may have undergone a core collapse, much like several other Messier globulars: Messier 15, Messier 30, Messier 70 and possibly Messier 79. 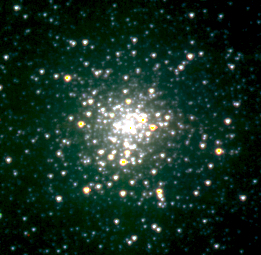 Image of the M62 star cluster in infrared at 3.6 (blue), 4.5 (green) and 8.0 µm. The image has been made by Médéric Boquien from the public image archive of the Spitzer Space Telescope (courtesy NASA/JPL-Caltech).

Messier 62 has an unusually high number of variables. 89 variable stars have been discovered in the cluster to date and many of them were found to be of the RR Lyrae type.

Messier 62 lies relatively close to Messier 19, another globular cluster in Ophiuchus, located at a greater distance from us than M62. M19 is somewhat larger, but the two clusters appear similar in apparent size and brightness. M19 is located 4.5 degrees north of M62.

In 2013, a team of researchers discovered a black hole in M62. Designated M62-VLA1, the object was classified as a stellar mass black hole, the kind that forms from the collapse of a massive star. This was the first black hole ever found in a globular cluster in the Milky Way. The first ever stellar mass black hole discovered in any globular cluster was detected in 2007, but the cluster was not part of the Milky Way, but belonged to the elliptical galaxy Messier 49, one of the largest members of the Virgo Cluster of galaxies.

Messier 62 is one of Charles Messier’s original discoveries. The comet hunter found the cluster on June 7, 1771, but did not take its accurate position until June 4, 1779, which is the date of his catalogue entry. Messier noted:

Very beautiful nebula, discovered in Scorpio, it resembles a little Comet, the center is brilliant & surrounded by a faint glow. Its position determined, by comparing it with the star Tau of Scorpius. M. Messier had already seen this nebula on June 7, 1771, without having determined the position where it is close to. Seen again on March 22, 1781.

William Herschel was the first to resolve the globular cluster into individual stars using a 20-foot telescope in 1785. He described M62 as “extremely bright, round, very gradually brighter in the middle, easily resolvable, about 4′ in diameter. With 240 and strong attention I see the stars of it. It is a miniature of the 3rd of the Connoiss. [Messier 3]” 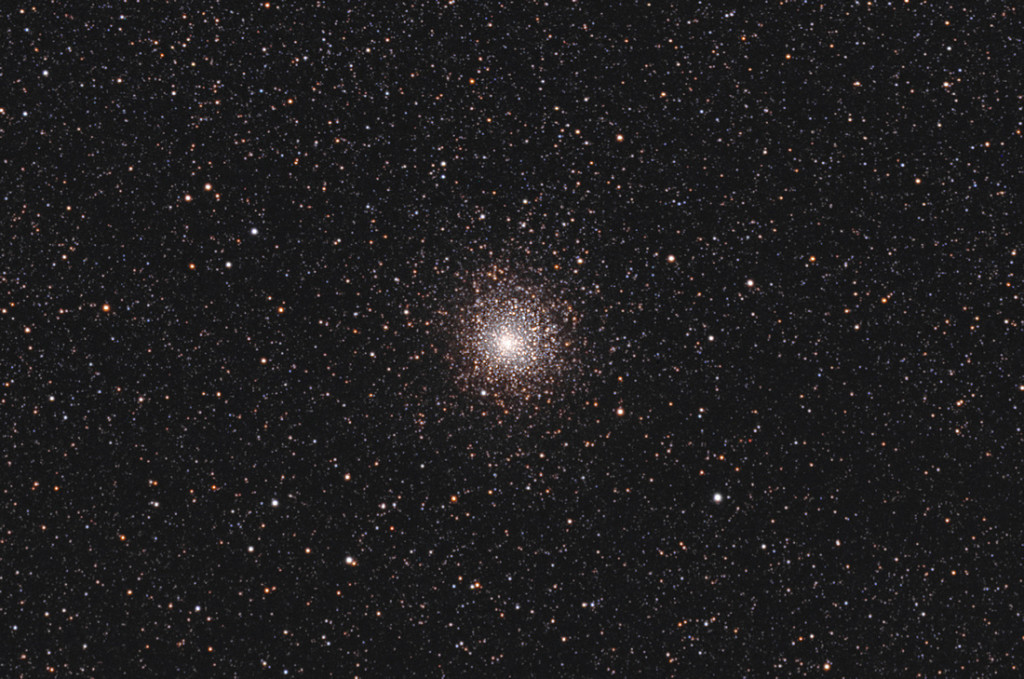 John Herschel catalogued the cluster as h 3661 in August 1834 and later added it to the General Catalogue as GC 4261. He noted, “Remarkable; globular cluster; very bright; large; gradually much brighter toward the middle; well resolved; stars from 14th to 16th magnitude.” 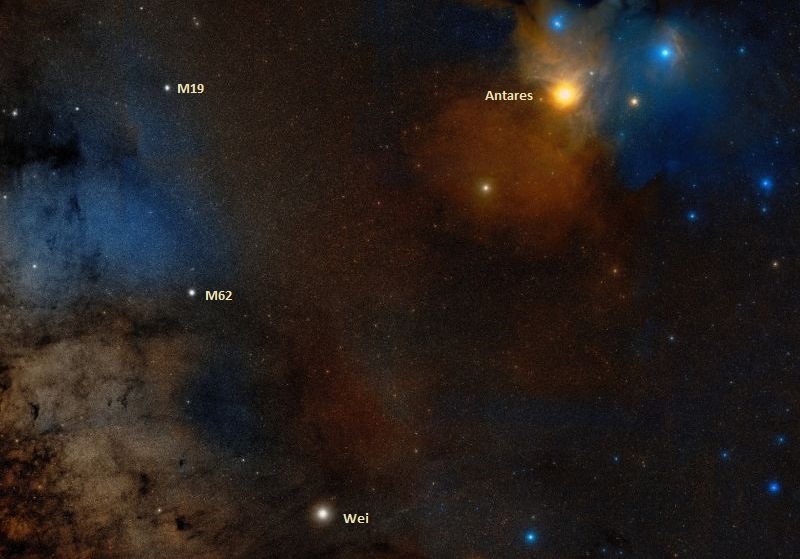 A fine large resolvable nebula, at the root of the creature’s [Scorpion‘s] tail, and in the preceding part of the Galaxy [Milky Way band]. It is an aggregated mass of small stars running up to a blaze in the centre, which renders the differentiating comparatively easy and satisfactory; and in this instance it was referred to its neighbour, 26 Ophiuchi, which is 5deg distant to the north: and it lies only about 7deg from Antares, on the south-east. This was registered in 1779, and Messier described it as “a very pretty nebula, resembling a little comet, the centre bright, and surrounded by a faint light.” Sir William Herschel, who first resolved it, pronounced it a miniature of Messier’s No. 3, and adds, “By the 20-foot telescope, which at the time of these observations was of the Newtonian construction, the profundity of this cluster is of the 734th order.” To my annoyance, it was started as a comet a few years ago, by a gentleman who ought to have known better. 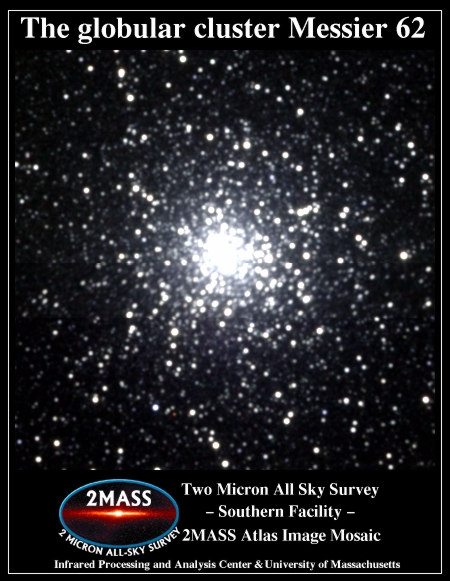 Messier 62 (NGC 6626). Atlas Image mosaic obtained as part of the Two Micron All Sky Survey (2MASS), a joint project of the University of Massachusetts and the Infrared Processing and Analysis Center/California Institute of Technology, funded by the National Aeronautics and Space Administration and the National Science Foundation. 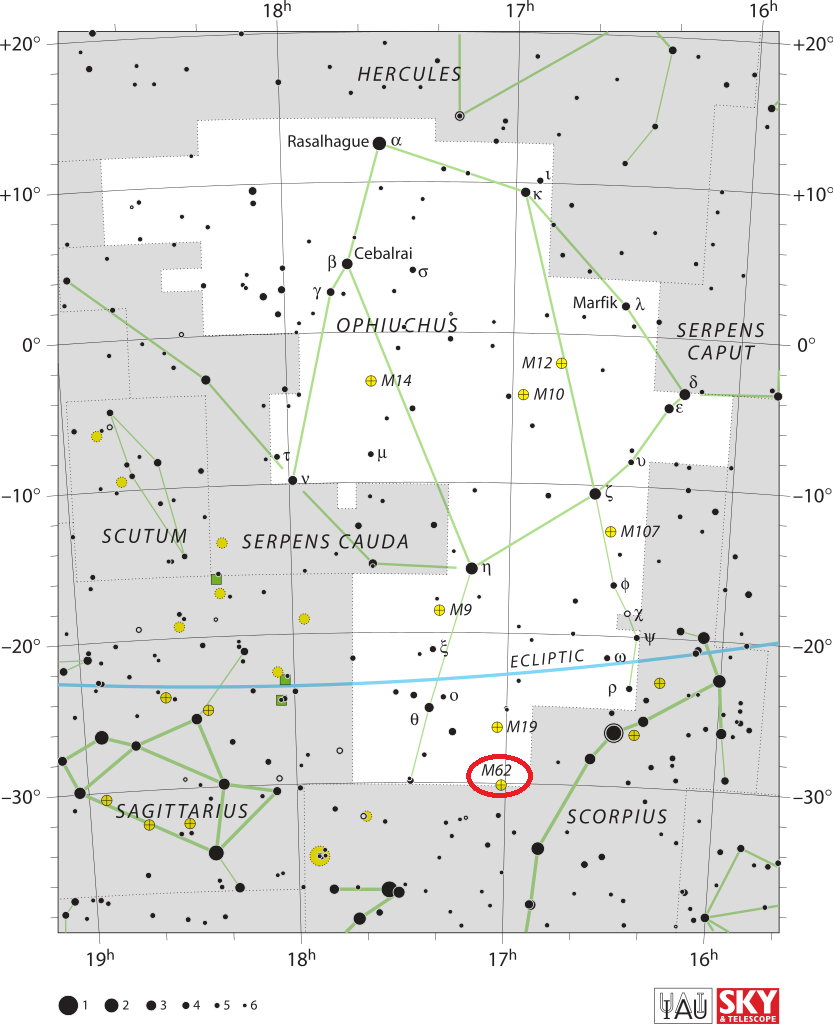