Messier 3 (M3) is a globular cluster located in the constellation Canes Venatici, the Hunting Dogs. It is one of the brightest, largest globular clusters in the sky. M3 has an apparent magnitude of 6.2 and is approximately 33,900 light years distant from Earth. It has the designation NGC 5272 in the New General Catalogue.

Messier 3 is one of the most popular targets among amateur astronomers next to Messier 13, the Hercules Globular Cluster, and one of the most studied of all known globular clusters. It has an absolute magnitude of about -8.93 and a luminosity about 300,000 times that of the Sun. The cluster is approaching us at 147.6 km/s.

M3 contains an estimated half a million stars. The brightest stars in the cluster are of magnitude 12.7 and the average brightness of the 25 brightest stars is 14.23 mag. The overall spectral type of M3 is F2. The cluster has a total mass of about 450,000 solar masses. 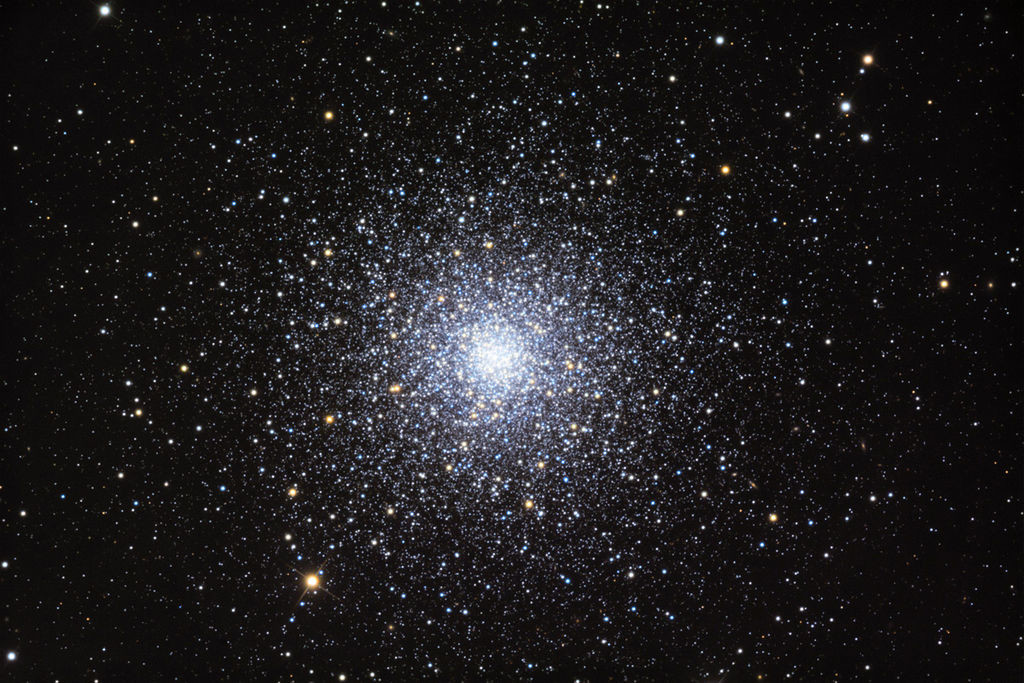 With a visual magnitude of 6.2, Messier 3 is difficult (but not impossible) to see without binoculars even in good viewing conditions, but the cluster appears fully defined in a moderate-sized telescope. A 4-inch telescope will reveal the bright core without resolving individual stars. A 6-inch instrument will resolve some of the outer stars, while an 8-inch telescope will reveal the stars everywhere in the cluster except in the bright core region. The central region of M3 can only be resolved into stars by larger instruments, starting with telescopes with a 12-inch aperture. 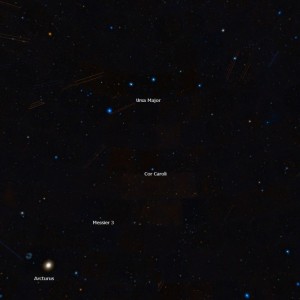 Messier 3 can be found halfway from the bright star Arcturus in Boötes constellation to Cor Caroli in Canes Venatici. It lies about 6 degrees north-northeast of Beta Comae Berenices, near the border between the constellations Canes Venatici and Boötes. The best time of year to observe the cluster from northern latitudes is during the months of March, April and May.

The cluster was discovered by Charles Messier on May 3, 1764. It was the 75th deep sky object ever observed at the time of discovery and the first object in the Messier catalogue discovered by Messier himself, who noted:

“On May 3, 1764, when working on a catalog of the nebulae, I have discovered one between Bootes & one of the Hunting Dogs of Hevelius, the southernmore of the two, exactly between the tail & the paws of this Dog, according to the charts of Flamsteed. I have observed that nebula on the meridian, & I compared with Mu Bootis; its right ascension has been found as 202d 51′ 19″, & its declination as 29d 32′ 57″ north. That nebula which I have examined with a Gregorian telescope of 30 pouces focal length, which magnifies 104 times, doesn’t contain any star; the center is brilliant, & the light gets lost fading [outward]; it is round, & could have 3 minutes of arc in diameter. One can see it in a good sky with an ordinary [nonachromatic] refractor of one foot [FL].”

William Herschel was the first to resolve Messier 3 into individual stars and recognise it as a cluster in 1784. He observed M3 using a 20-foot long reflector and described it as “one of the globular clusters; very brilliant and beautiful. The compression of the stars begins to increase pretty suddenly from the outside at 3/4 of the radius, and continues gradually up to its centre, its diameter taking in the outside is full half of the field of the glass magnifying 171 times, giving 4’30”.”

In 1832, John Herschel (William Herschel’s son) observed the cluster and made the following entry: “A most superb object, diam = 10s.0 time in RA. Not less than 1000 stars 11m and under. They run into a blaze at the centre, and form as it were radiating lines and pointed projections from the mass, with many stragglers.” 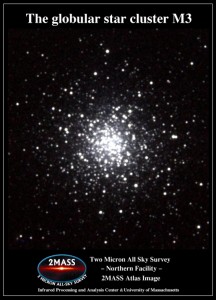 Messier 3. Image: Two Micron All Sky Survey (2MASS), a joint project of the University of Massachusetts and the Infrared Processing and Analysis Center/California Institute of Technology, funded by the National Aeronautics and Space Administration and the National Science Foundation.

The best early description of the cluster comes from Admiral William Henry Smyth, English naval officer and astronomer, in an entry made in April 1831:

“A brilliant and beautiful globular congregation of not less than 1000 small stars, between the southern Hound and the knee of Boötes; it blazes splendidly towards the centre, and has outliers in all directions, except the sf [south following; SE], where it is so compressed that, with its stragglers, it has something of the figure of the luminous oceanic creature called Medusa pellucens. This noble object is situated in a triangle formed by three small stars in the np [north preceding; NW], nf [north following; NE], and sf [south following, SE] quadrants, which, by their comparative brightness, add to the beauty of the field. It is nearly in mid-distance between Arcturus and Cor Caroli, at 11deg north-west of the former star. This mass is one of those balls of compact and wedged stars, whose laws of aggregation it is so impossible to assign; but the rotundity of figure gives full indication of some general attractive bond of union. It was discovered in 1764 by Messier, who described it as “a nebula without a star, brilliant and round:” his instrument must have been rather moderate not to resolve this object, and it is matter of regret, that the exertions of such a man were straitened to such means. It was next pronounced to be a “mottled nebulosity;” but in 1784, Sir W. Herschel attacked it with his 20-foot reflector, and resolved it into a “beautiful cluster of stars, about 5′ or 6′ in diameter.” By the gauging process, which he has fully described, he estimated its profundity to be of the 243rd order.”

Messier 3 is one of the 250 or so known globular clusters in the Milky Way Galaxy. The cluster lies 38,800 light years or 11,900 parsecs from the galactic centre and 31,600 light years or 9,700 parsecs above the plane of the Milky Way, in the galaxy’s halo. When observed from Earth, the cluster lies in the direction of intergalactic space, opposite to the galactic centre.

Messier 3 is believed to be between 8 and 11.4 billion years old. It contains mostly old, red stars. The cluster is also home to an unusually large number of variable stars.

New variable stars continue to be discovered in the cluster to this day. Currently there are 274 known variables identified in M3, which is more than in any other known globular cluster. Of these, at least 170 stars are RR Lyrae variables.

Messier 3 also contains a relatively high number of blue stragglers, blue main-sequence stars that appear to be young and are bluer and more luminous than other stars in the cluster. These stars are now believed to form as a result of stellar interactions.

Messier 3 is the prototype for the Oosterhoff type I cluster, which is to say a metal-rich globular cluster (relatively speaking), or one with a high abundance of elements other than hydrogen and helium compared to other globular clusters. 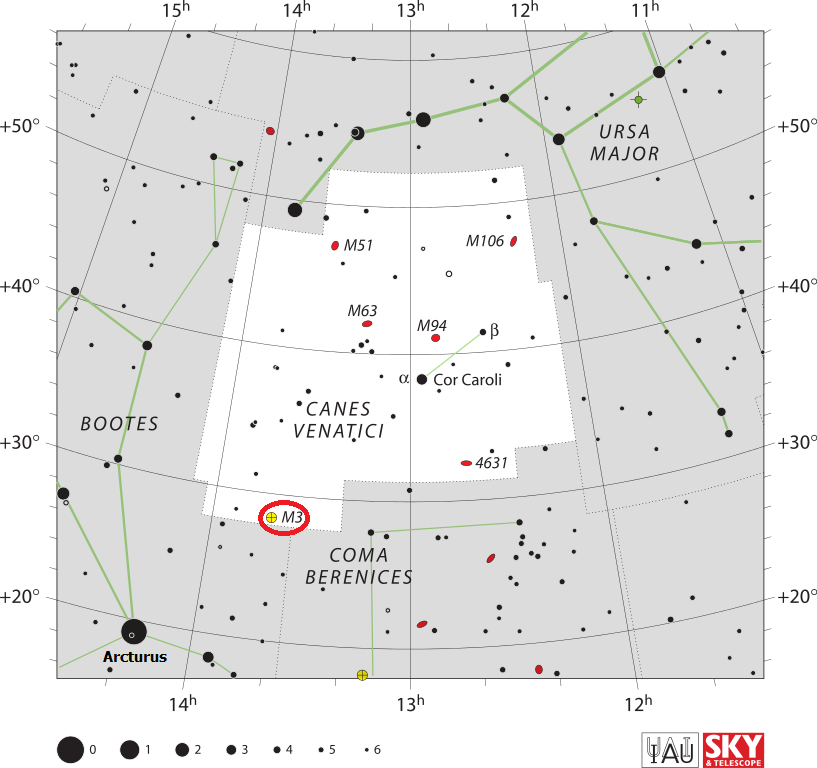 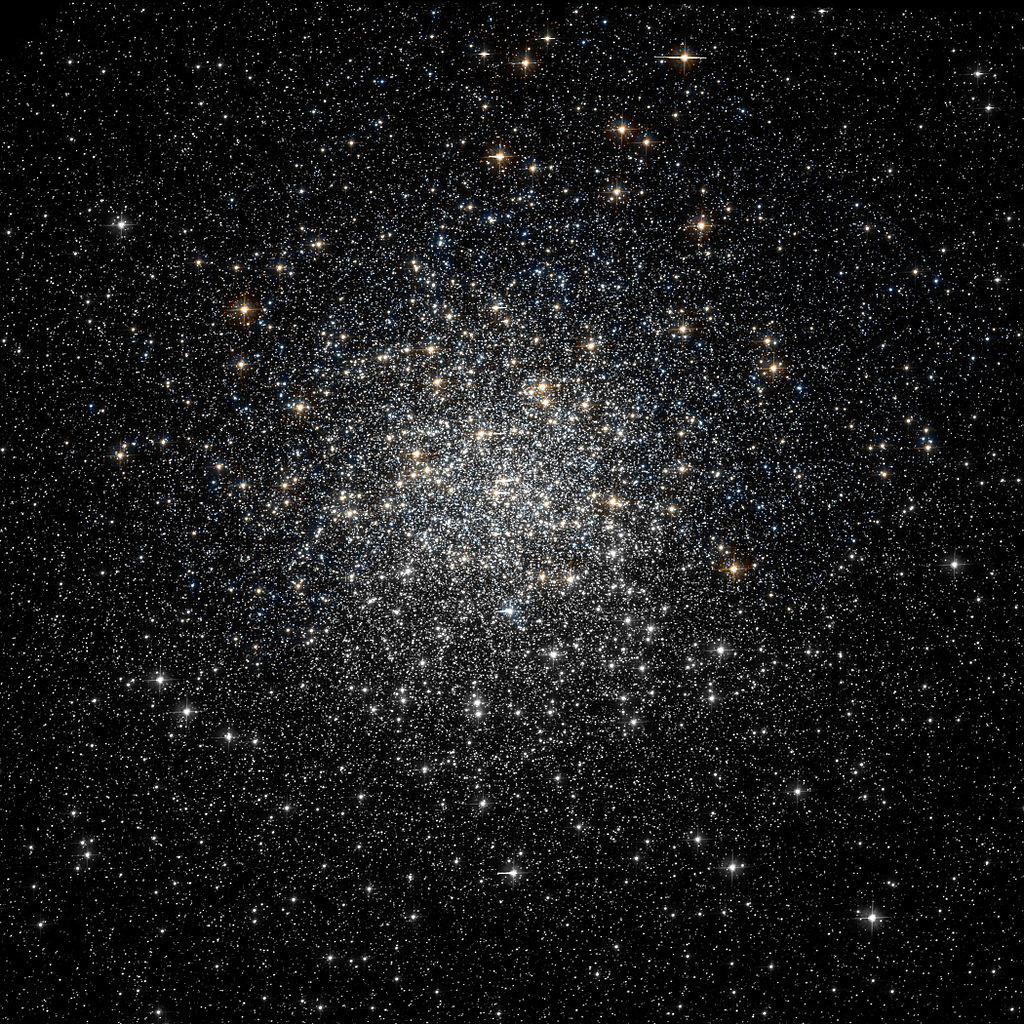 Messier 3. Image based on observations made with the NASA/ESA Hubble Space Telescope, and obtained from the Hubble Legacy Archive, which is a collaboration between the Space Telescope Science Institute (STScI/NASA), the Space Telescope European Coordinating Facility (ST-ECF/ESA) and the Canadian Astronomy Data Centre (CADC/NRC/CSA). 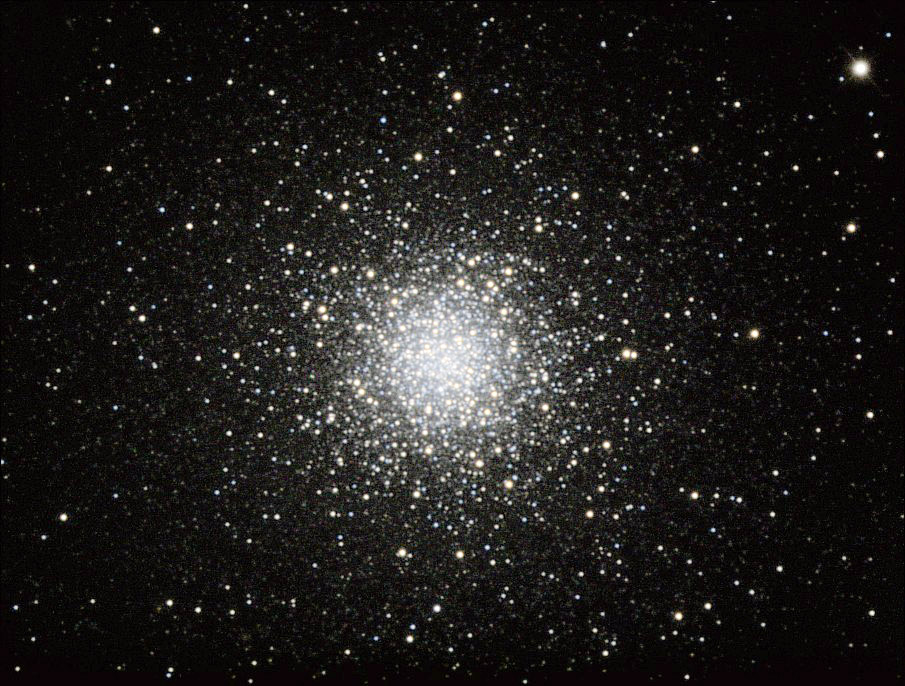 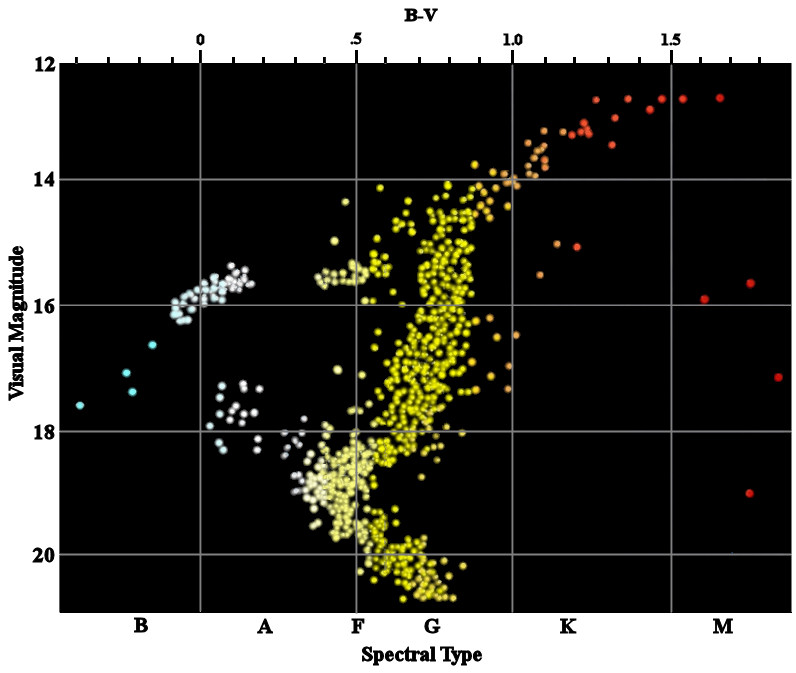 This is a color-magnitude diagram for the Messier 3 globular cluster (after A.R. Sandage 1953). The colored points on the chart represent the plotted positions of stars in the cluster. The horizontal scale is based on the B—V color index of the measured stars. From the main sequence stars at magnitude 19 and fainter, the plot forms a knee that bends toward the upper right. Based on the position of the knee, the distance modulus for this cluster is determined to be 15.7. The stars along the upper right branch have left the main sequence and entered the red giant stage. From the red giants branch, a horizontal branch then runs to the left. Note the gap in this branch at visual magnitude 15–16 and spectral type A, where there is a population of variable stars. Image: R.J. Hall