Messier 107 (M107) is a globular cluster located in the constellation Ophiuchus. It lies at a distance of 20,900 light years from Earth. It has the designation NGC 6171 in the New General Catalogue.

M107 occupies an area of 13 arc minutes of the apparent sky, corresponding to a linear diameter of 79 light years. Visually, it is only 3 arc minutes in diameter. It has an apparent magnitude of 8.85.

The cluster is a challenging object for binoculars, which only show a contrast change, and much easier to observe in small telescopes, which reveal a small, round, diffuse object with a slightly brighter centre. 6-inch telescopes resolve the brightest stars in the outer region of the cluster, while 12-inch instruments reveal many stars across the entire cluster.

Messier 107 can be found 2.75 degrees southwest of the magnitude 2.5 star Zeta Ophiuchi, in the direction of Scorpius.

Zeta Ophiuchi is positioned 16 degrees north of Antares, the brightest star in Scorpius and one of the brightest stars in the night sky. The best time of year to observe M107 is in the late spring and early summer. 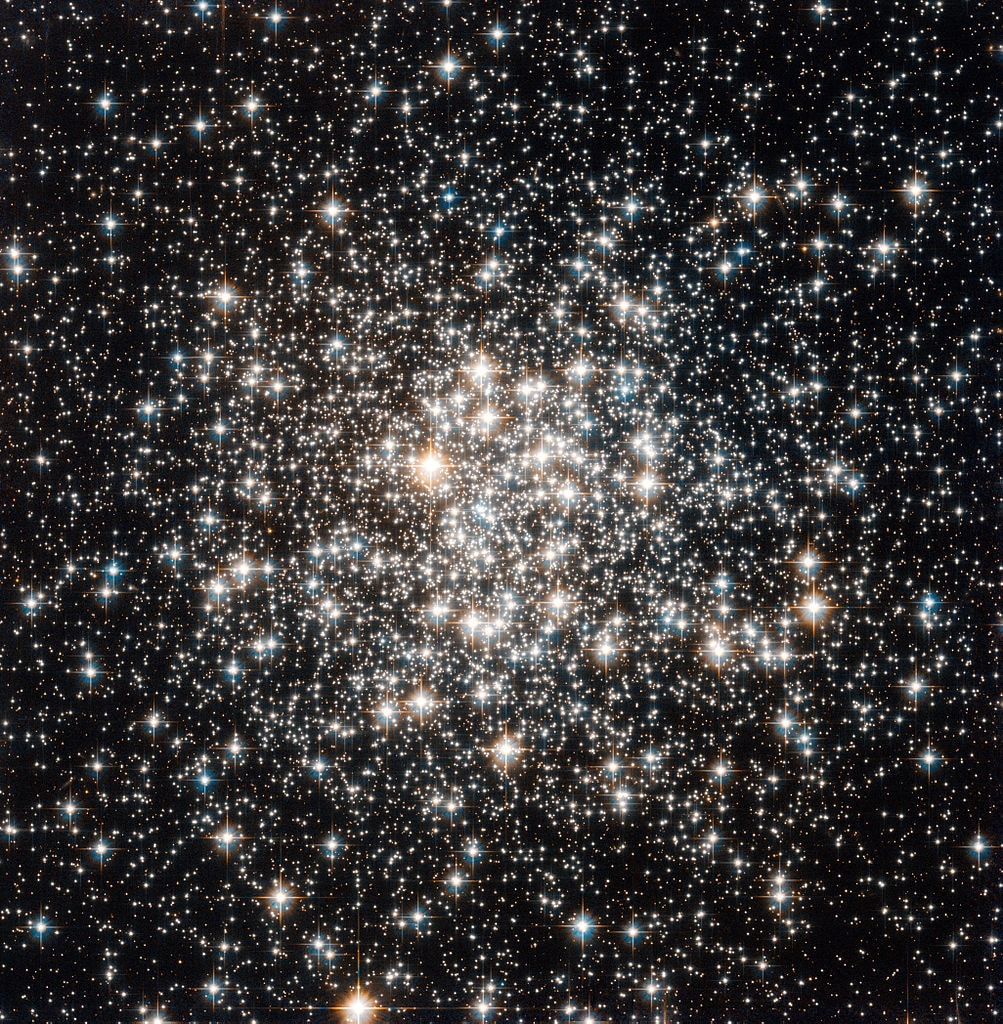 The NASA/ESA Hubble Space Telescope has captured a crowd of stars that looks rather like a stadium darkened before a show, lit only by the flashbulbs of the audience’s cameras. Yet the many stars of this object, known as Messier 107, are not a fleeting phenomenon, at least by human reckoning of time — these ancient stars have gleamed for many billions of years. Messier 107 is one of more than 150 globular star clusters found around the disc of the Milky Way galaxy. These spherical collections each contain hundreds of thousands of extremely old stars and are among the oldest objects in the Milky Way. The origin of globular clusters and their impact on galactic evolution remains somewhat unclear, so astronomers continue to study them through pictures such as this one obtained by Hubble. As globular clusters go, Messier 107 is not particularly dense. Visually comparing its appearance to other globular clusters, such as Messier 53 or Messier 54 reveals that the stars within Messier 107 are not packed as tightly, thereby making its members more distinct like individual fans in a stadium’s stands. Messier 107 can be found in the constellation of Ophiuchus (The Serpent Bearer) and is located about 20 000 light-years from the Solar System. French astronomer Pierre Méchain first noted the object in 1782, and British astronomer William Herschel documented it independently a year later. A Canadian astronomer, Helen Sawyer Hogg, added Messier 107 to Charles Messier’s famous astronomical catalogue in 1947. This picture was obtained with the Wide Field Camera of Hubble’s Advanced Camera for Surveys. The field of view is approximately 3.4 by 3.4 arcminutes. Image: ESA/Hubble & NASA

Messier 107 is a class X globular cluster (on a density scale from I to XII), which means that it is very loose, with a very open stellar distribution. M107 has several dark regions, which is atypical for a globular cluster. The regions are believed to be caused by dust, which blocks the light of the cluster’s stars.

The cluster lies close to the galactic plane and is approaching us at 147 km/s. It contains about 100,000 stars, including 25 known variables and a few blue stragglers. Most of the stars in the cluster are very old. The estimated age of M107 is 13.95 billion years, which makes it one of the oldest globulars known. The cluster has an estimated mass of 182,000 solar masses. 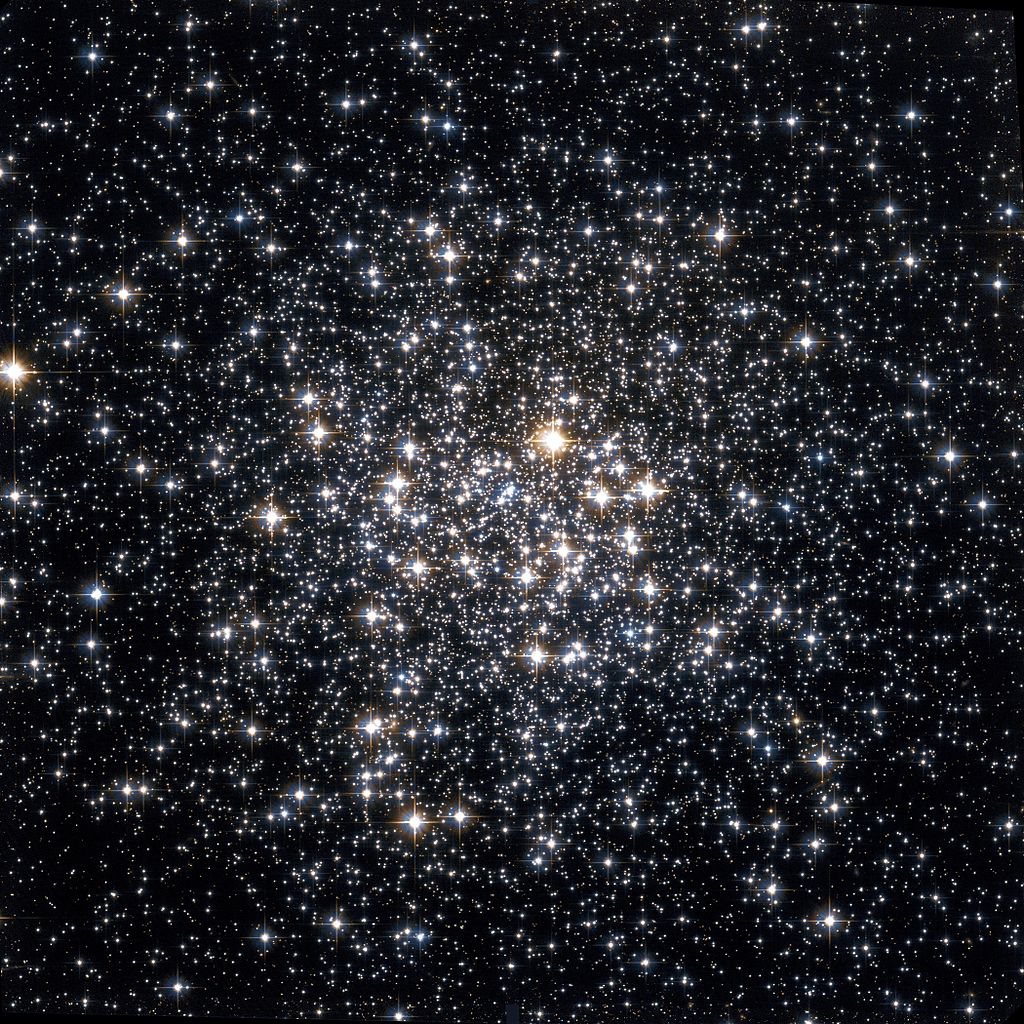 Messier 107 was discovered by Charles Messier’s friend and colleague Pierre Méchain in April 1782. It was added to the Messier catalogue by Helen Sawyer Hogg in 1947, along with Messier 105 and Messier 106. M107 is the last globular cluster listed in the catalogue and, chronologically, it was the last Messier object to be discovered. Méchain mentioned his discovery in a letter to Johann Bernoulli dated May 6, 1783:

In April 1782 I discovered a small nebula in the left flank of Ophiuchus between the stars Zeta and Phi, the position of which I have not yet observed any closer. 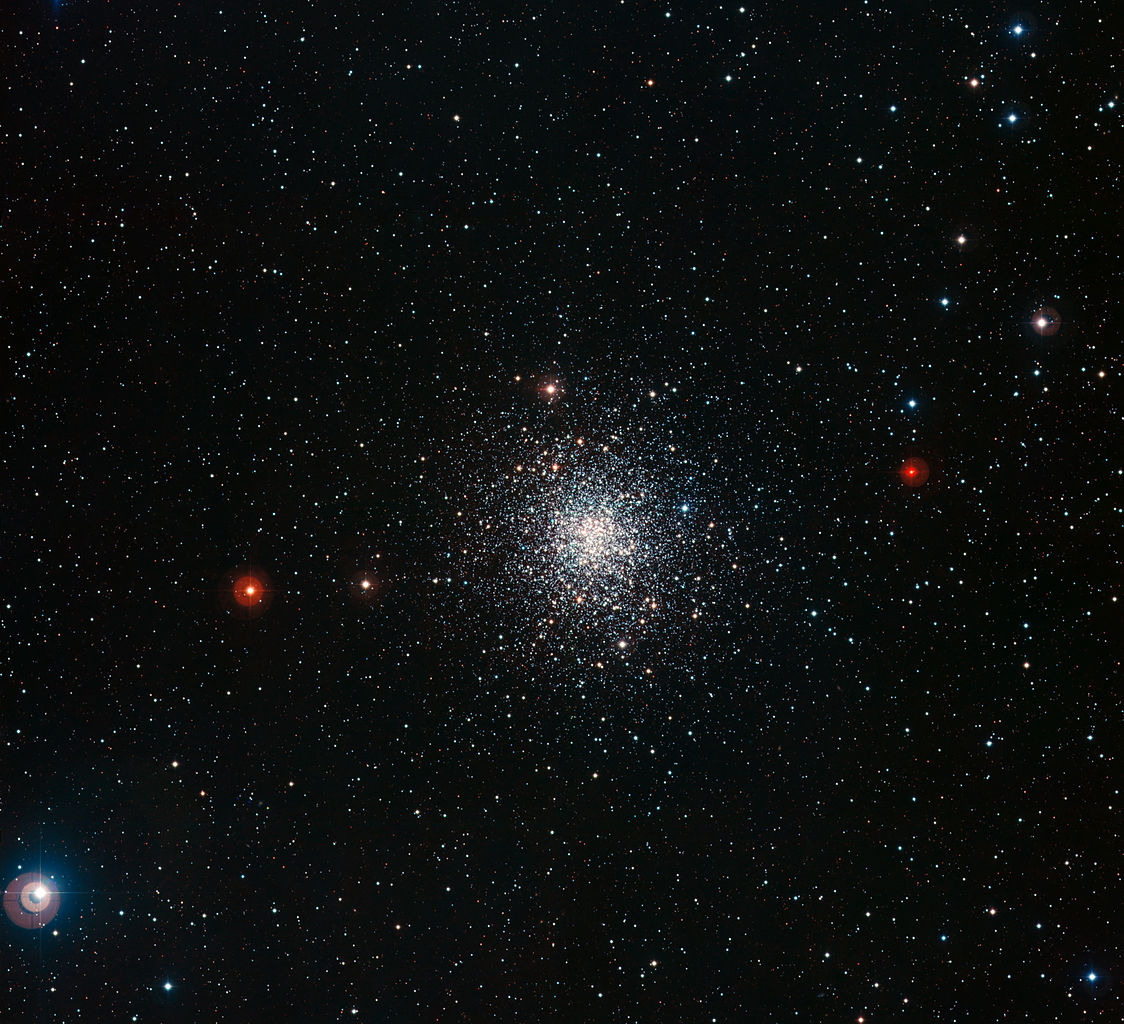 The globular cluster Messier 107, also known as NGC 6171, is located about 21 000 light-years away in the constellation of Ophiuchus. Messier 107 is about 13 arcminutes across, which corresponds to about 80 light-years at its distance. As is typical of globular clusters, a population of thousands of old stars in Messier 107 is densely concentrated into a volume that is only about twenty times the distance between our Sun and its nearest stellar neighbour, Alpha Centauri, across. This image was created from exposures taken through blue, green and near-infrared filters, using the Wide Field Imager (WFI) on the MPG/ESO 2.2-metre telescope at La Silla Observatory, Chile. Image: ESO

William Herschel discovered M107 independently on May 12, 1793 and catalogued it as H VI.40. Herschel was the first to resolve the cluster into individual stars. He described it as a “very beautiful extremely compressed cluster of stars, extremely rich, 5’ or 6’ in diameter, gradually more compressed toward the centre.”

A large but pale granulated cluster of small stars, on the Serpent-bearer‘s right leg. There are five telescopic stars around it, so placed as to form a crucifix, when the cluster is high in the field; but the region immediately beyond is a comparative desert. After long gazing, this object becomes more compressed in the centre, and perplexes the mind by so wonderful an aggregation. It was discovered by WH in May, 1793, and was registered 5′ or 6’ in diameter. The mean place was obtained by differentiation with Zeta Ophiuchi, from which it is distant 3deg to the south-south-west, in the line between Beta Scorpii and Beta Ophiuchi. 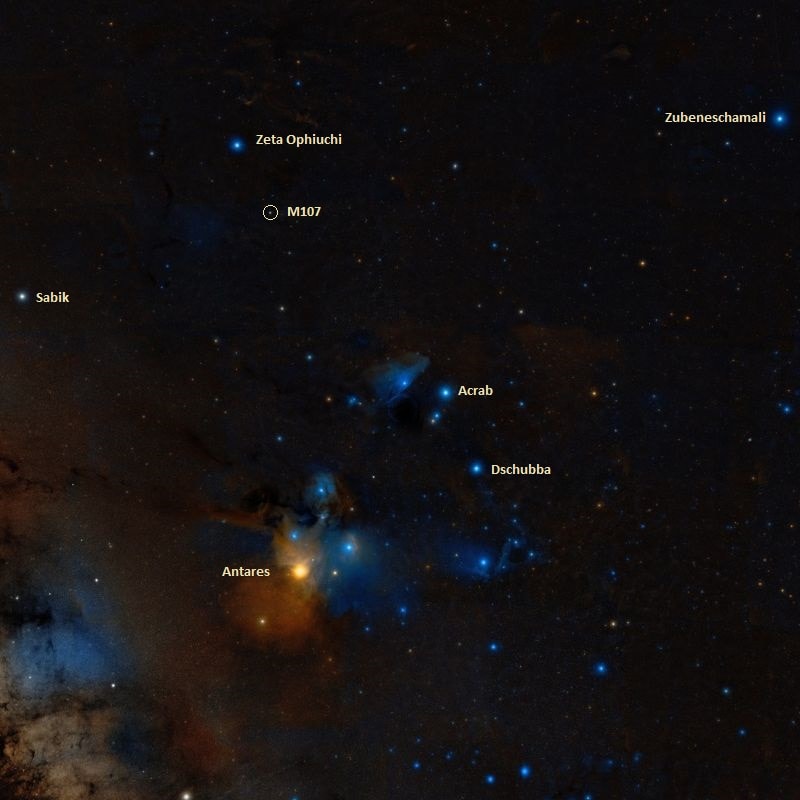 John Herschel catalogued the cluster as h 3637 and later added it to the General Catalogue as GC 4211. He described it as a “globular cluster; large; very rich; very much compressed; round; well resolved.”

Heber Curtis photographed M107 with the Crossley reflector at the Lick Observatory and described it as a “bright globular cluster,” adding that “the brighter part is 3′ in diameter; with fainter extensions about 8′.” 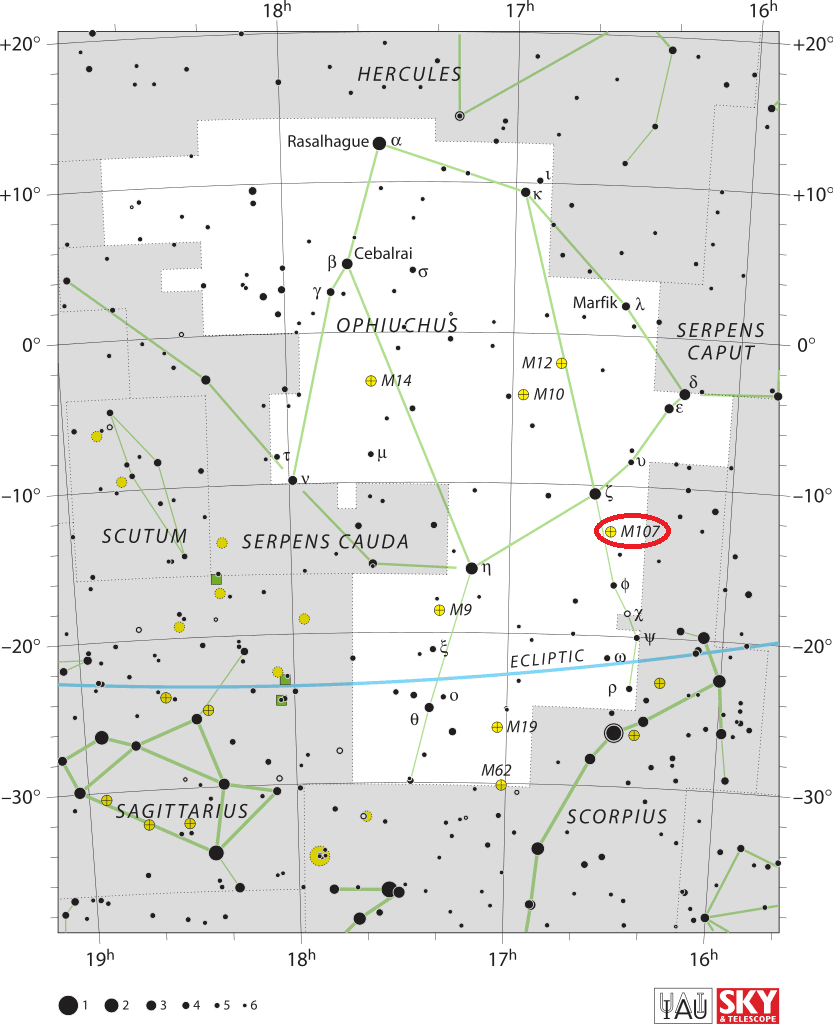