Messier 53 (M53) is a globular star cluster located in the northern constellation Coma Berenices. The cluster has an apparent magnitude of 8.33 and lies at an approximate distance of 58,000 light years from Earth. It has the designation NGC 5024 in the New General Catalogue.

Messier 53 is relatively easy to find as it lies in the same area of the sky as Arcturus, the fourth brightest star in the sky. Arcturus can be easily found by following the line formed by the three bright stars of the Big Dipper‘s handle. Arcturus is the first bright star that appears along the imaginary line.

Messier 53 can be found 15 degrees west of the orange giant. Located in the eastern part of Coma Berenices, M53 is positioned just a degree to the northeast of Diadem, Alpha Comae Berenices, an optical double star with a visual magnitude of 4.32.

Diadem can be found by following a line drawn from Arcturus via Muphrid, Eta Boötis, for about 11 degrees to the west.

Small telescopes reveal a hazy patch, slightly oval in shape, with a large bright core, while larger instruments resolve the cluster’s outer regions into stars. At least a medium-sized telescope is required to resolve the stars and significantly larger ones to see the full diameter of the cluster’s outer halo. The best time of year to observe M53 is in the months of March, April and May. 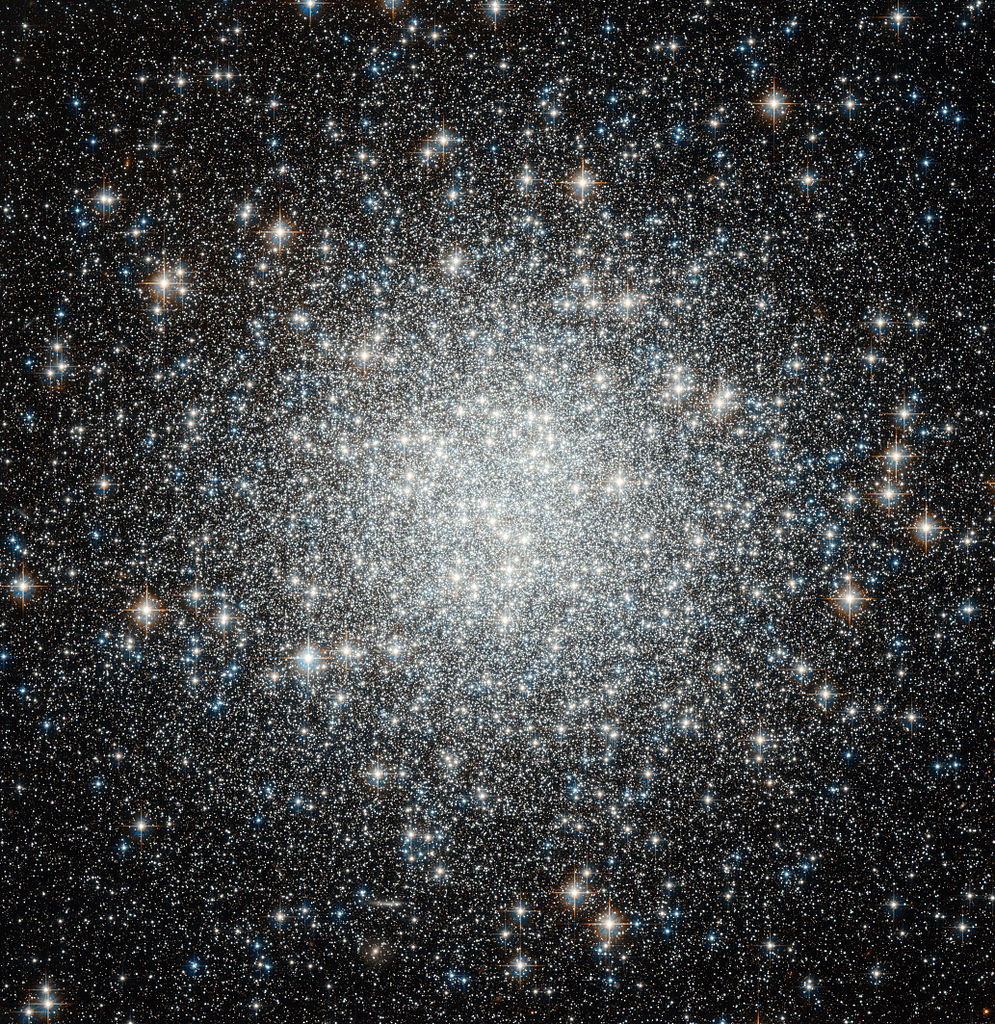 Thousands and thousands of brilliant stars make up this globular cluster, Messier 53, captured with crystal clarity in this image from the NASA/ESA Hubble Space Telescope. Bound tightly by gravity, the cluster is roughly spherical and becomes denser towards its heart. These enormous sparkling spheres are by no means rare, and over 150 exist in the Milky Way alone, including Messier 53. It lies on the outer edges of the galaxy, where many other globular clusters are found, almost equally distant from both the centre of our galaxy and the Sun. Although they are relatively common, the famous astronomer William Herschel, not at all known for his poetic nature, once described a globular cluster as “one of the most beautiful objects I remember to have seen in the heavens”, and it is clear to see why. Globular clusters are much older and larger than open clusters, meaning they are generally expected to contain more old red stars and fewer massive blue stars. But Messier 53 has surprised astronomers with its unusual number of a type of star called blue stragglers.
These youngsters are rebelling against the theory of stellar evolution. All the stars in a globular cluster are expected to form around the same time, so they are expected follow a specific trend set by the age of the cluster and based on their mass. But blue stragglers don’t follow that rule; they appear to be brighter and more youthful than they have any right to be. Although their precise nature remains mysterious these unusual objects are probably formed by close encounters, possibly collisions, between stars in the crowded centres of globular clusters.
This picture was put together from visible and infrared exposures taken with the Wide Field Channel of Hubble’s Advanced Camera for Surveys.The field of view is approximately 3.4 arcminutes across. Image: ESA/Hubble & NASA

Messier 53 lies about 60,000 light years from the galactic centre and, being roughly at the same distance from the solar system, it is one of the more distant globulars. It is also the most northernly globular cluster known. M53 has a density classification V, which means that its central core is visible, but more spread out and less dense than in clusters with classification I to IV. The overall spectral type of M53 is F6.

The cluster occupies an area of 13 arc minutes of apparent sky, which corresponds to a spatial diameter of about 220 light years. It is approaching us at 112 km/s. The bright, compact central region of the cluster is about 2 arc minutes in diameter. 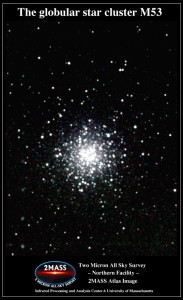 Messier 53 contains at least 500,000 stars. The stars in the cluster are considered metal-poor, as they contain very little quantities of elements heavier than helium, and are below average in metallicity, even for stars found in a globular cluster. The estimated age of M53 is 12.67 billion years.

The cluster contains at least 67 variable stars, of which 47 are classified as RR Lyrae variables. These are pulsating periodic variable stars of spectral type A that are often used as standard candles, to measure galactic distances.

Astronomers have also discovered a milisecond pulsar and almost 200 blue stragglers in the cluster. Blue stragglers are old stars that appear much younger, bluer and more luminous as a result of interaction and collision with other stars.

Messier 53 lies in the vicinity of another globular cluster, NGC 5053. NGC 5053 is considerably fainter, looser and less populated, and can be seen in the same field of view as M53 as it lies only a degree to the east.

The fainter cluster, which is in fact slightly closer to us than M53, contains only about 3,500 stars and only appears as a patch of light in 8-inch telescopes.

Messier 53 was discovered by the German astronomer Johann Elert Bode on February 3, 1775. Describing the object as a “rather conspicuous nebula,” Bode noted:

On February 3, 1775, early in the morning, I discovered a nebula north of the star Epsilon or Vindemiatrix at the northern wing of Virgo, about 1 deg east of the 42nd star of Coma Berenices, which appears through the telescope rather vivid and of round shape. The 11th figure shows its position relative to the 42nd star and some smaller ones which don’t appear in the sky charts, between which several separations have been measured.

Charles Messier discovered the cluster independently on February 26, 1777 and offered the following description:

Nebula without stars discovered below & near Coma Berenices, a little distant from the star 42 in that constellation, according to Flamsteed. This nebula is round and conspicuous. The Comet of 1779 was compared directly with this nebula, & M. Messier has reported it on the chart of that comet, which will be included in the volume of the Academy for 1779. Observed again April 13, 1781: It resembles the nebula which is below Lepus [Messier 79].

William Herschel observed the cluster with a larger telescope and was the first to resolve it into individual stars. He found the cluster similar in appearance to Messier 10. Herschel noted:

A cluster of very close stars; one of the most beautiful objects I remember to have seen in the heavens. The cluster appears under the form of a solid ball, consisting of small stars, quite compressed into one blaze of light, with a great number of loose ones surrounding it, and distinctly visible in the general mass.

John Herschel observed the cluster on May 6, 1826 and described it as a “most beautiful highly compressed cluster. Stars very small, 12 to 20m; with scattered stars to a considerable distance; irregularly round, but not globular. Comes up to a blaze in the center; indicating a round mass of pretty equable density.” 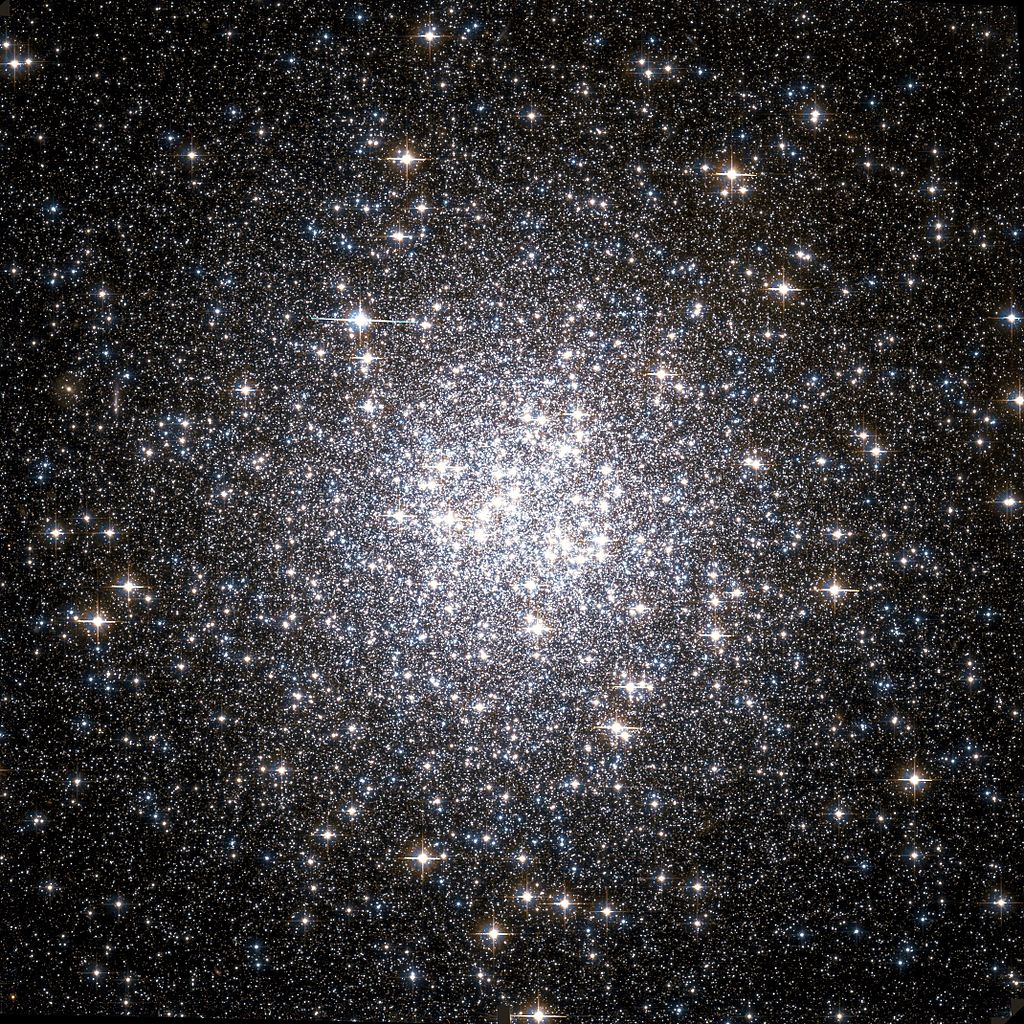 A globular cluster, between Berenice’s tresses and the Virgin‘s left hand, with a coarse pair of telescopic stars in the sf [south following, SE] quadrant, and a single one in the sp [south preceding, SW]. This is a brilliant mass of minute stars, from the 11th to the 15th magnitude, and from thence to gleams of star-dust, with stragglers to the np [north preceding, NW], and pretty diffused edges. From the blaze at the centre, it is evidently a highly compressed ball of stars, whose law of aggregation into so dense and compact a mass, is utterly hidden from our imperfect senses. It was enrolled by Messier in 1774 as No. 53, and resolved into stars by Sir W. Herschel.

The contemplation of so beautiful an object, cannot but set imagination to work, though the mind may be soon lost in astonishment at the stellar dispositions of the great CREATOR and MAINTAINER. Thus, in reasoning by analogy, these compressed globes of stars confound conjecture as to the models in which the mutual attractions are prevented from causing the universal destruction of their system. Sir John Herschel thinks, that no pressure can be propagated through a cluster of discrete stars; whence it would follow, that the permanence of its form must be maintained in a way totally different from that which our reasonings suggest.

Before quitting this interesting ball of innumerable worlds, I may mention that it was examined by Sir John Herschel, with Mr. Baily, in the 20-foot reflector; and that powerful instrument showed the cluster with curved appendages of stars, like the short claws of a crab running out from the main body. A line through Delta and Epsilon Virginis, northward, meeting another drawn from Arcturus to Eta Bootis, unite upon this wonderful assemblage; or it is also easily found by its being about 1deg northeast of 42 Comae Berenices, the alignment of which is already given [Smyth’s No. CCCCLXXI (471)]. 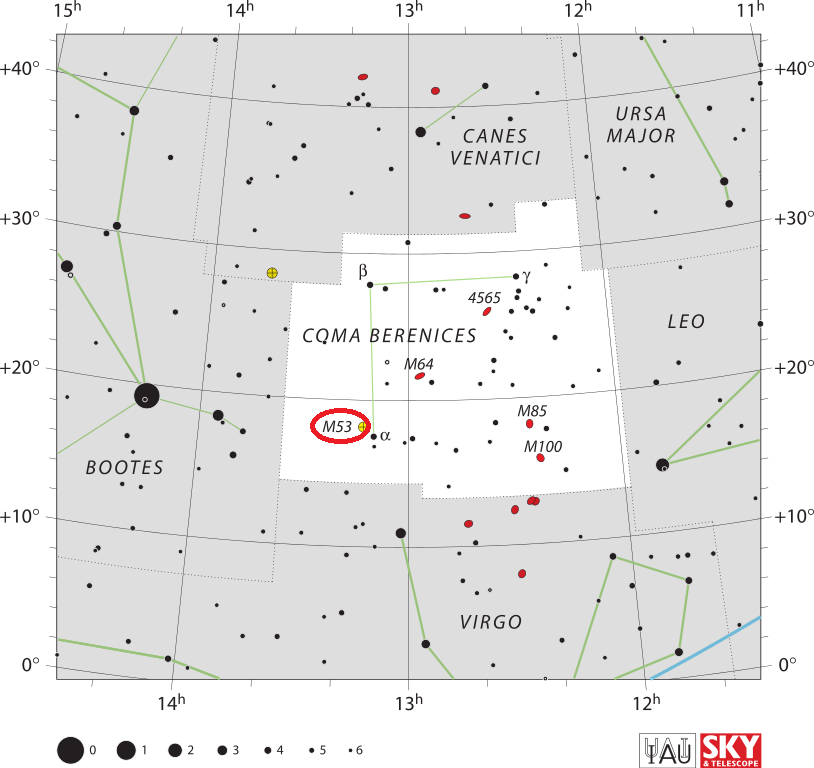