Messier 92 (M92) is a globular cluster located in the northern constellation Hercules. The cluster lies at a distance of 26,700 light years from Earth and has an apparent magnitude of 6.3. Its designation in the New General Catalogue is NGC 6341.

Messier 92 occupies an area of 14 arc minutes of apparent sky, which corresponds to a linear extension of 109 light years. It is positioned north of the Keystone asterism in Hercules, between the Keystone star Eta Herculis and Iota Herculis. The cluster lies about 60 percent of the way from Eta to Iota. It forms a triangle with the two northernmost stars of the Keystone, Eta and Pi Herculis, which form the widest part of the asterism.

M92 can also be found by first locating the bright Etamin (Eltanin, Gamma Draconis), an orange giant in Draco, and then moving about 6 degrees in the direction of the Keystone.

In 10×50 binoculars, M92 appears like a blurry star with a brighter core. Small and medium-sized telescopes will resolve some of the stars in the outer regions of the cluster. 6-inch and 8-inch telescopes show an oval-shaped cluster with a bright centre, surrounded by a halo of stars. 12-inch telescopes resolve dozens of individual stars in the halo and throughout the cluster. The best time of year to observe M92 is during the summer, when Hercules is high overhead in the evening for northern observers. 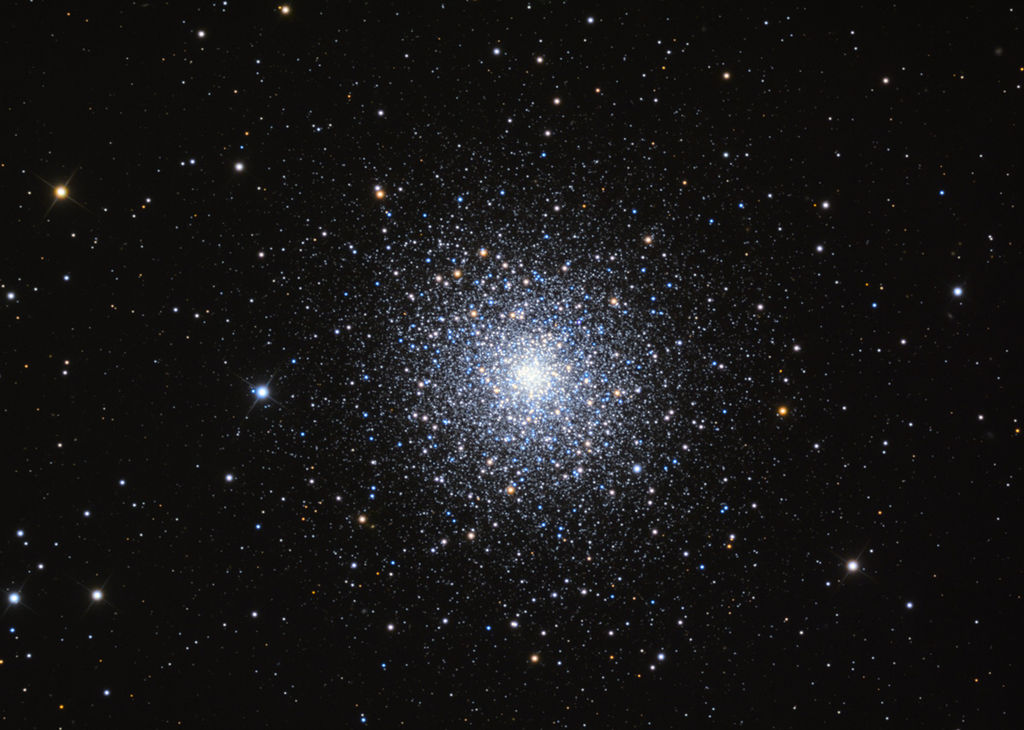 Messier 92 is one of the brighter northern globulars – both visually and in terms of absolute magnitude – and can be seen without binoculars under good conditions. It is, however, not as popular a target for amateur astronomers as the brighter and larger Hercules Globular Cluster (M13), which lies in the vicinity. M92 has a much denser core and is more difficult to resolve than M13.

With an estimated age of 14.2 billion years – almost the same age as the universe itself – M92 is one of the oldest clusters known and possibly the single oldest globular in the Milky Way. The cluster has an extremely low abundance of elements other than hydrogen and helium, with only 0.5 percent of the Sun’s metallicity.

This striking new NASA/ESA Hubble Space Telescope image shows a glittering bauble named Messier 92. Located in the northern constellation of Hercules, this globular cluster— a ball of stars that orbits a galactic core like a satellite — was first discovered by astronomer Johann Elert Bode in 1777. Messier 92 is one of the brightest globular clusters in the Milky Way, and is visible to the naked eye under good observing conditions. It is very tightly packed with stars, containing some 330 000 stars in total. As is characteristic of globular clusters, the predominant elements within Messier 92 are hydrogen and helium, with only traces of others. It is actually what is known as an Oosterhoff type II (OoII) globular cluster, meaning that it belongs to a group ofmetal-poor clusters — to astronomers, metals are all elements heavier than hydrogen and helium. By exploring the composition of globulars like Messier 92, astronomers can figure out how old these clusters are. As well as being bright, Messier 92 is also old, being one of the oldest star clustersin the Milky Way, with an age almost the same as the age of the Universe. Image: ESA/Hubble & NASA Acknowledgement: Gilles Chapdelaine

Messier 92 is classified as an Oosterhoff type II (OoII) globular cluster, which means that it is a metal poor cluster with longer period variable stars of the RR Lyrae type. It contains 28 candidate variables, of which 20 have been confirmed. These include 17 RR Lyrae variables and a W Ursae Majoris type variable, an eclipsing binary star whose two components share an envelope of material and are in contact with one another.

Messier 92 also contains 10 X-ray sources within the 1.02 arc minute half-mass radius. Half of these are suspected to be cataclysmic variables, close binary stars that that have outbursts in brightness at irregular intervals as a result of one component, a white dwarf, accreting matter from the companion. As a result, an accretion disk forms around the white dwarf and outbursts occur when a portion of the disk falls onto the star. 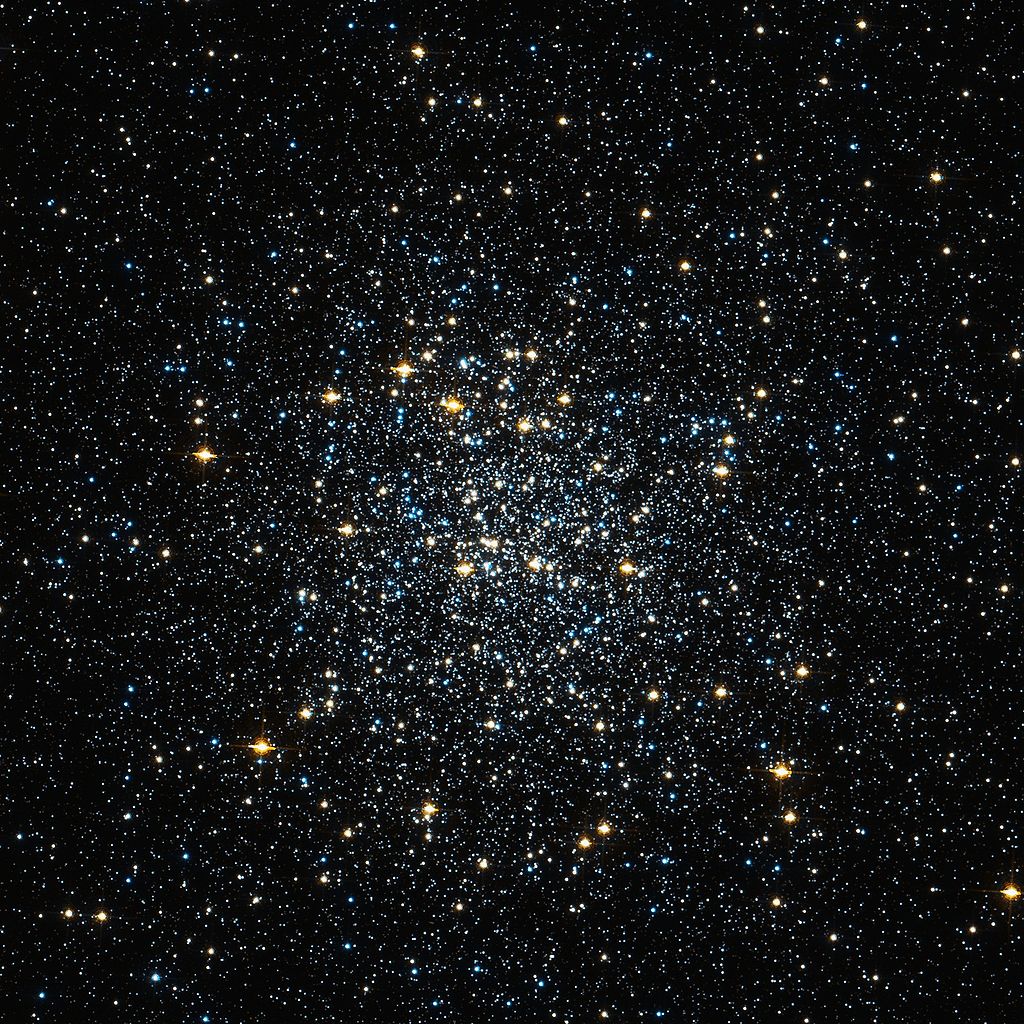 The north celestial pole will come within a degree of M92 in about 14,000 years. Every 26,000 years, the Earth completes a precession of its axis and, during that cycle, the pole moves near M92. M92 was last a pole cluster back in 10,000 B.C. Currently, the pole is pointing toward Polaris, Alpha Ursae Minoris, the brightest star in Ursa Minor constellation. 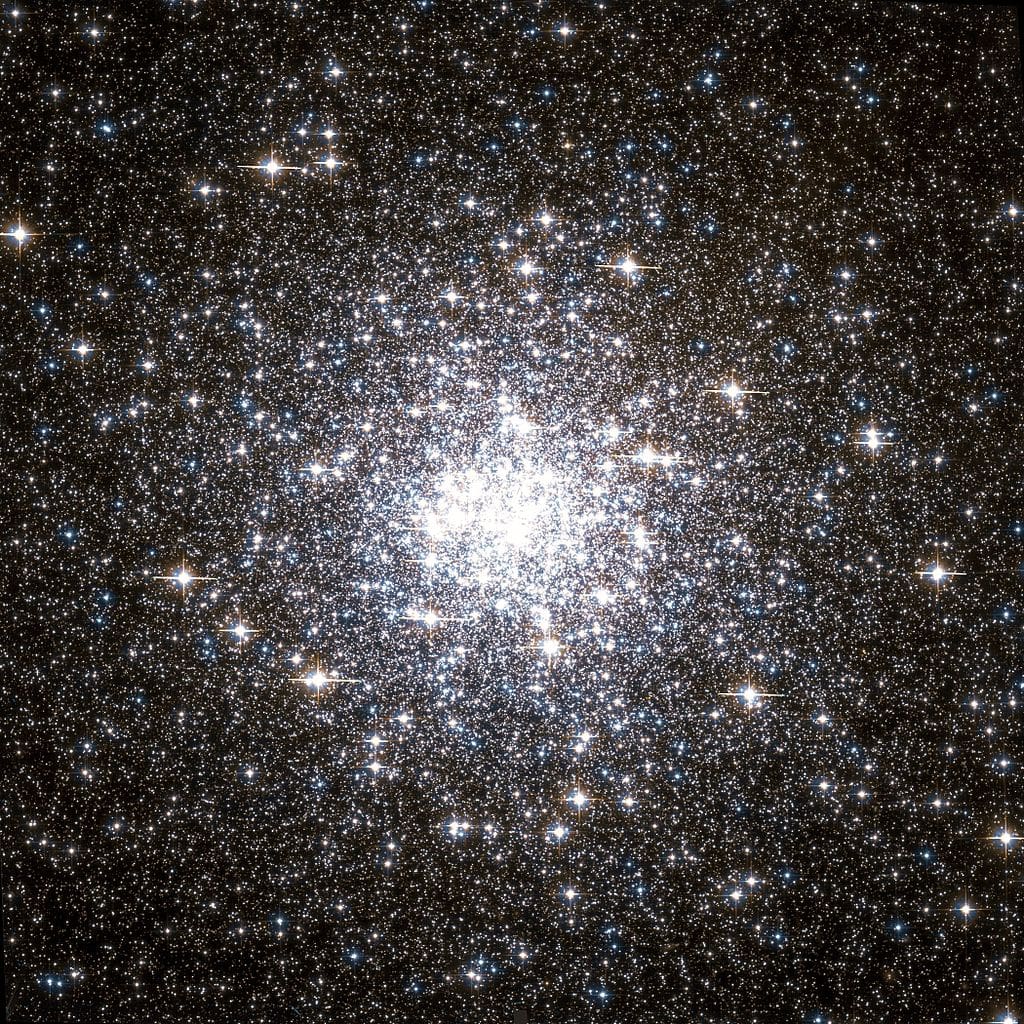 Messier 92 was discovered by the German astronomer Johann Elert Bode on December 27, 1777. Bode described the object as a “nebula. More or less round with pale glow.” After seeing it for the first time, he wrote:

On this occasion, I also want to announce that on December 27, 1777 I have discovered a new nebula in Hercules, not known to me, southwest below the stars in his foot, which shows up in a mostly round figure with a pale glimmer of light. Its longitude is about 11 deg [Sgr] [251 d] and its latitude 66d north. Together with two small stars, which don’t occur at Flamsteed, it appears in the reversing telescope as shown in fig k (in the following volume).

Charles Messier independently discovered the cluster and catalogued it on March 18, 1781, along with eight galaxies in the Virgo Cluster: Messier 84, Messier 85, Messier 86, Messier 87 (Virgo A), Messier 88, Messier 89, Messier 90 and Messier 91. The galaxies are located in the constellations Virgo and Coma Berenices. Describing M92, Messier noted:

Nebula, fine, distinct, & very bright, between the knee & the left leg of Hercules, it can be seen very well in a telescope of one foot [FL]. It contains no star; the centre is clear & brilliant, surrounded by nebulosity & [it] resembles the nucleus of a large Comet: its brightness, its size, approach much that of the nebula which is in the girdle of Hercules. See No. 13 of this Catalogue [Messier 13]: its position has been determined, by direct comparison with the star Sigma Herculis, fourth magnitude: the nebula & the star are on the same parallel. (diam. 5′) 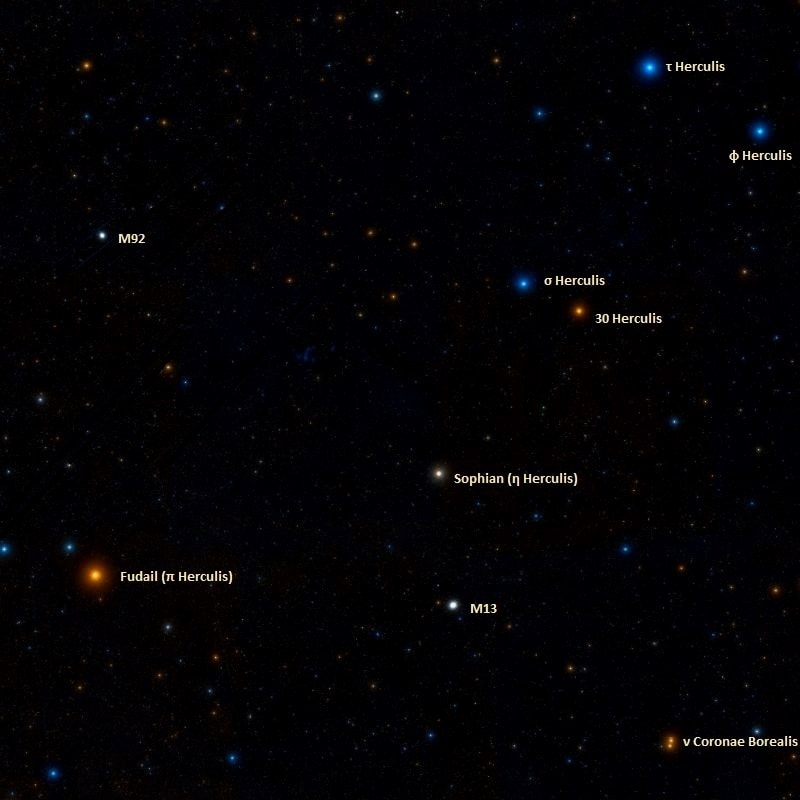 William Herschel was the first to resolve the cluster into stars using a 7-foot telescope in 1783.

A globular cluster of minute stars, preceding the right leg of Hercules. This object is large, bright, and resolvable, with a very luminous centre; and, under the best vision, has irregular streamy edges. It is immediately preceded by a 12th-magnitude star, distinct from the outliers, and there are several other stars in the field, of which the brightest is of the 7th magnitude in the nf [north following, NE], with a Delta AR = 28s. Messier, who enrolled it in 1781, remarks that “it is easily seen with a telescope of one foot [FL];” and it really demands very little optical aid to render it visible. Messier’s own instrument did not, it seems, resolve it, for he compares the shining centre, with its attendants, to the nucleus of a comet surrounded by nebulous matter; but of course, it rose into a brilliant cluster, of 7′ or 8′ in diameter, before the reflectors of Sir W. Herschel in 1783. The mean place was obtained by carefully differentiating the cluster with Eta Herculis, from which it bears north-by-east, 1deg 1/2 distant; bearing to the north of Alpha Herculis, and west of Wega.

John Herschel added the cluster to his General Catalogue as GC 4294. He described it as a “globular cluster; very bright; very large; extremely compressed toward the middle; well resolved; small stars.” 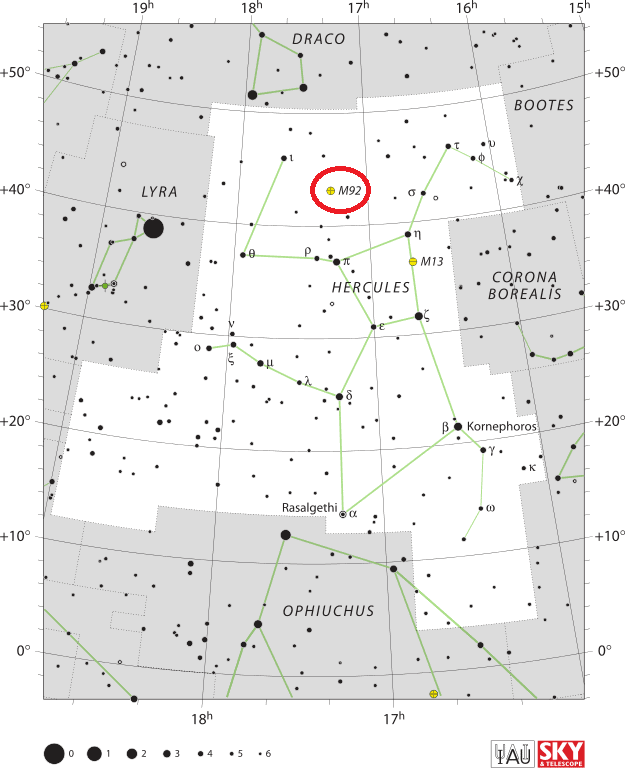