Messier 54 (M54) is an extragalactic globular cluster located in the southern constellation Sagittarius. It has an apparent magnitude of 8.37 and lies at a distance of 87,400 light years from Earth. It has the designation NGC 6715 in the New General Catalogue.

The cluster is very easy to find as it lies near Ascella, Zeta Sagittarii, the third brightest star in Sagittarius and one of the stars that form the celestial Teapot. M54 is positioned 0.5 degrees south and 1.5 degrees west of the star.

While M54 is easy to locate, even large amateur telescopes cannot resolve it into individual stars, and binoculars and small telescopes reveal only a round, hazy patch of light. The best time of year to observe the cluster is during the months of June, July and August, but it never rises high above horizon for northern observers.

Messier 54 was the first globular cluster discovered to belong to a different galaxy. It was originally thought to lie at a distance of 50,000 to 65,000 light years from the solar system and be one of the many globulars within the Milky Way. However, in 1994 scientists discovered that M54 most likely belonged to the Sagittarius Dwarf Elliptical Galaxy (SagDEG), one of the satellite galaxies of the Milky Way that will eventually be captured and eaten by our galaxy. Even though it wasn’t recognised as one for 200 years, M54 is considered to be the first extragalactic cluster ever discovered. 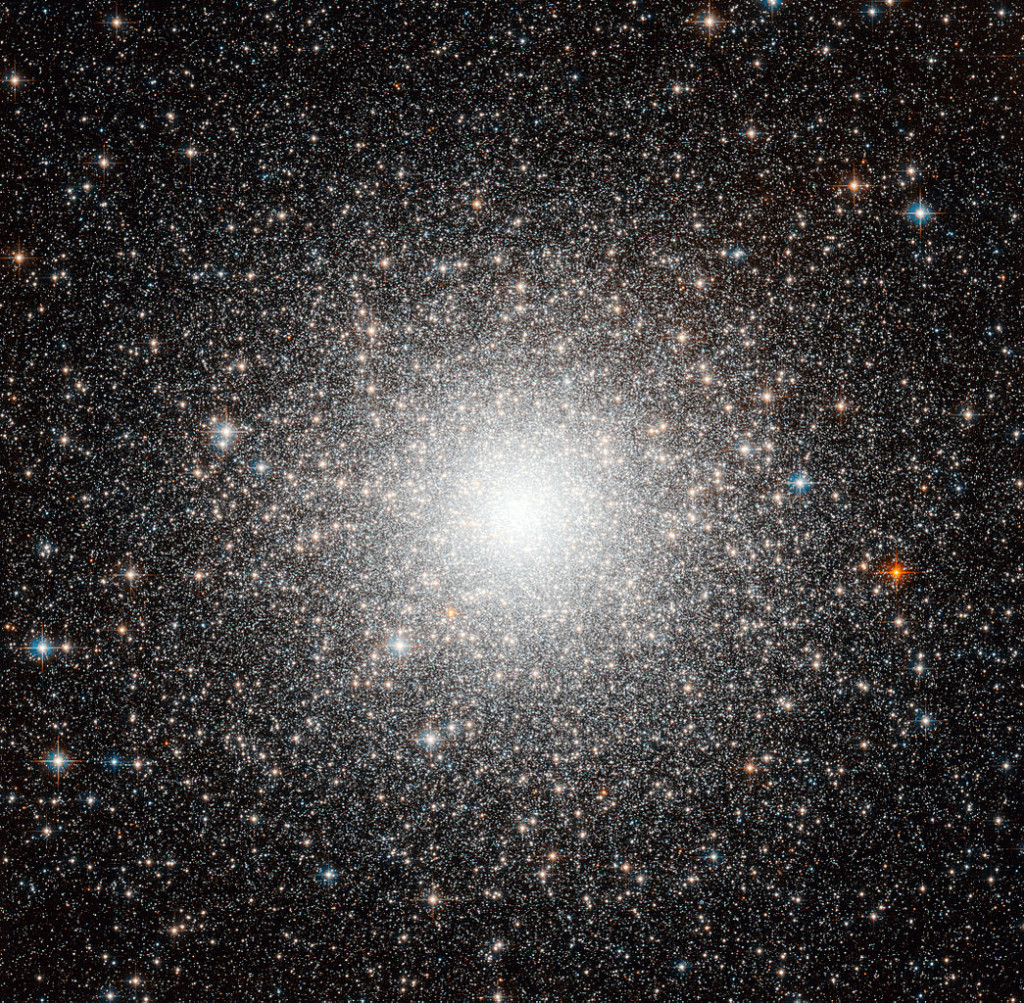 The object shown in this beautiful Hubble image, dubbed Messier 54, could be just another globular cluster, but this dense and faint group of stars was in fact the first globular cluster found that is outside our galaxy. Discovered by the famous astronomer Charles Messier in 1778, Messier 54 belongs to a satellite of the Milky Way called the Sagittarius Dwarf Elliptical Galaxy. Messier had no idea of the significance of his discovery at the time, and it wasn’t until over two centuries later, in 1994, that astronomers found Messier 54 to be part of the miniature galaxy and not our own. Current estimates indicate that the Sagittarius dwarf, and hence the cluster, is situated almost 90 000 light-years away — more than three times as far from the centre of our galaxy than the Solar System.
Ironically, even though this globular cluster is now understood to lie outside the Milky Way, it will actually become part of it in the future. The strong gravitational pull of our galaxy is slowly engulfing the Sagittarius dwarf, which will eventually merge with the Milky Way creating one much larger galaxy.
This picture is a composite created by combining images taken with the Wide Field Channel of Hubble’s Advanced Camera for Surveys. Light that passed through a yellow-orange (F606W) was coloured blue and light passing through a near-infrared filter (F814W) was coloured red. The total exposure times were 3460 s and 3560 s, respectively and the field of view is approximately 3.4 by 3.4 arcminutes. Image: ESA/Hubble & NASA

The only other extragalactic globular cluster listed in Messier’s catalogue is Messier 79, located in the constellation Lepus. M79 was discovered by Charles Messier’s friend Pierre Méchain in 1780. It belongs to the Canis Major Dwarf Galaxy, another satellite of the Milky Way.

The estimated age of M54 is 13 billion years. The cluster is moving away from us at about 142 km/s, which is a similar velocity to that of the Sagittarius Dwarf Elliptical Galaxy (130 km/s). The galaxy also lies at a similar distance (80,000 to 90,000 light years).

The cluster is positioned in the centre of the galaxy, which led some to speculate that it may in fact be the galaxy’s core. Others, however, argued that M54 was a real globular cluster and that it was the decay of its orbit that caused the cluster to fall to the galaxy’s central region. The decay of the cluster’s orbit is thought to have been caused by dynamical friction, or gravitational drag, which occurs when a moving body loses momentum and kinetic energy as a result of gravitational interactions with other objects in space. 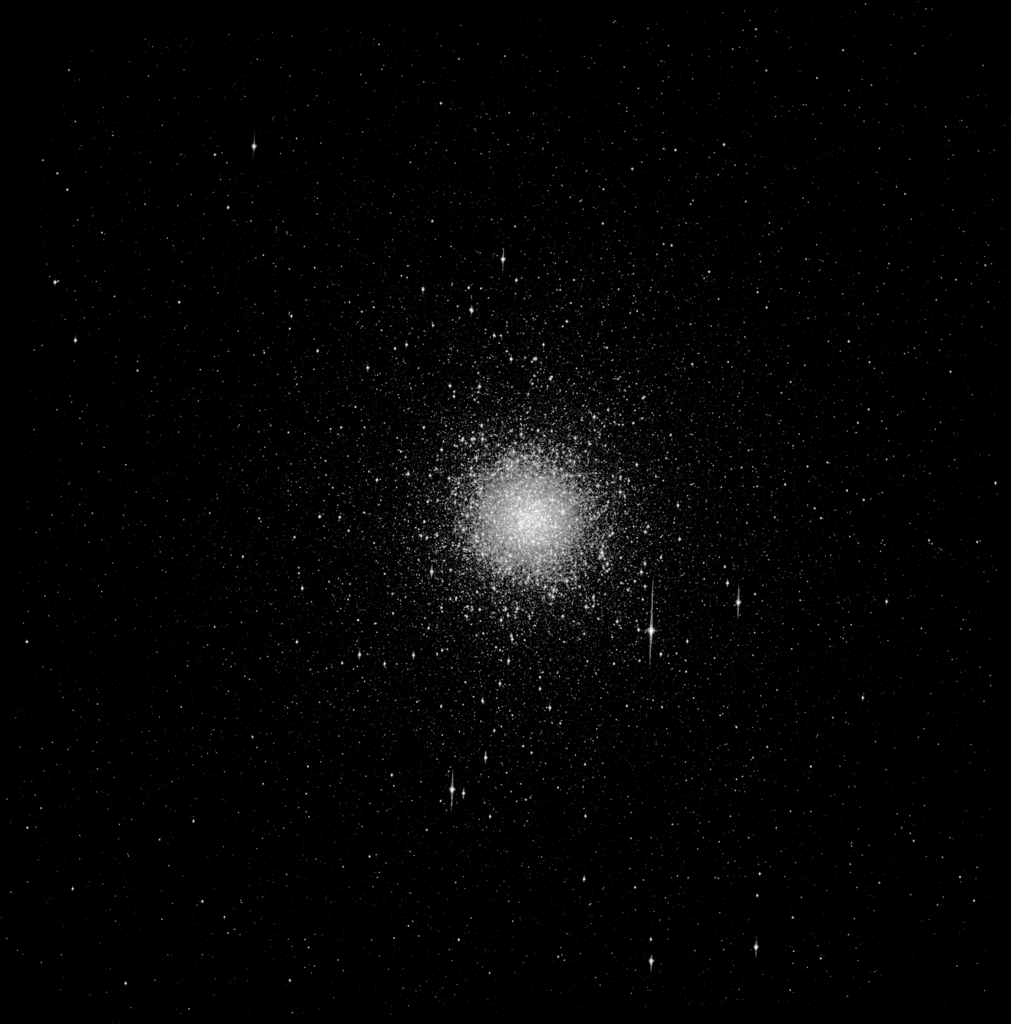 Messier 54 occupies an area of 12 arc minutes, corresponding to a true radius of 153 light years. It has a density classification III, which makes it quite concentrated and one of the denser globular clusters known. With an absolute magnitude of -10, M54 has a luminosity about 850,000 times that of the Sun. The cluster’s bright central core is only 2.1 arc minutes in diameter and the nucleus itself occupies only 1 arc minute of apparent sky.

Messier 54 contains more than a million stars, including at least 82 variables. Of these, 55 are RR Lyrae variables. Astronomers also discovered two semi-regular red variable stars with periods of 77 and 101 days.

Blue hook stars were another interesting discovery in M54. These stars belong to a rare class of horizontal branch stars (stars with masses similar to the Sun’s in the stage of evolution immediately following the red giant branch) that go beyond the lower limit of the envelope mass of canonical horizontal-branch hot stars. Blue hook stars have been detected in very few other galactic globulars: Omega Centauri, NGC 6273, NGC 2808 and NGC 6388. 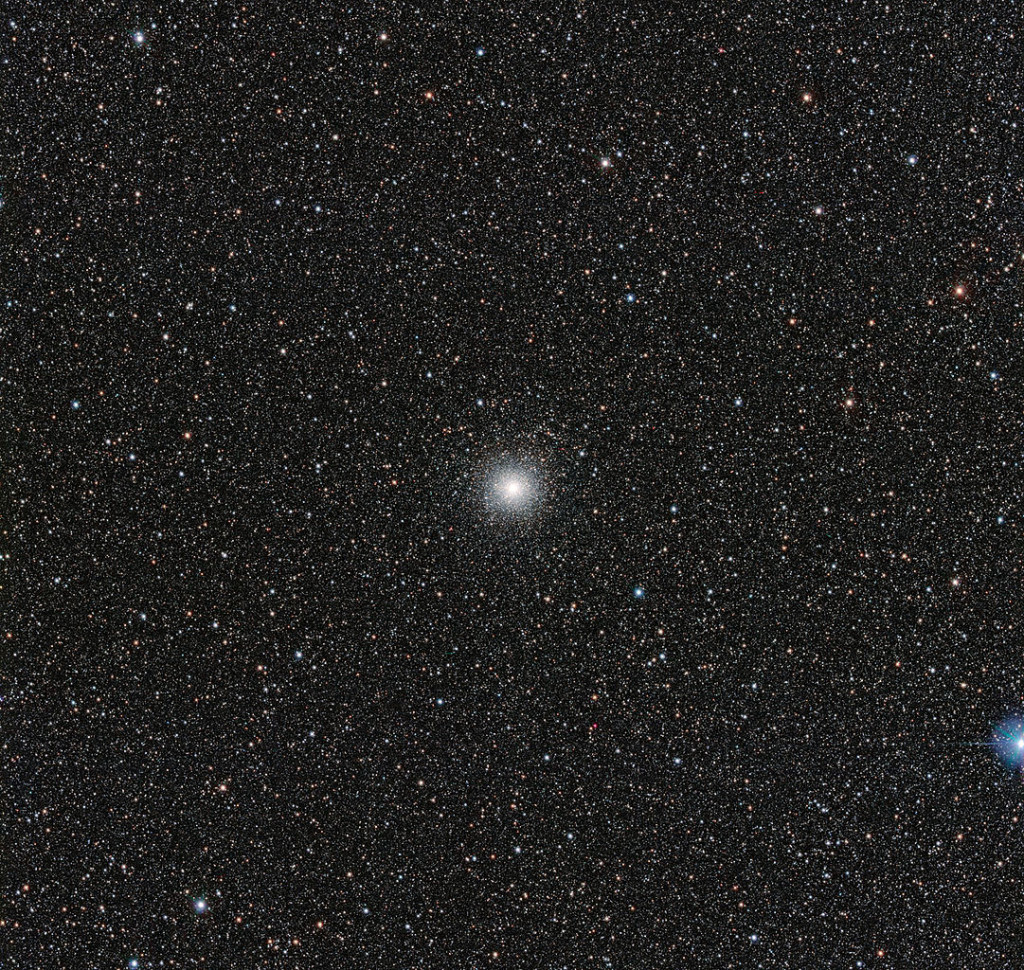 This image from the VLT Survey Telescope at ESO’s Paranal Observatory in northern Chile shows the globular cluster Messier 54. This cluster looks very similar to many others, but it has a secret. Messier 54 doesn’t belong to the Milky Way, but actually is part of a small satellite galaxy, the Sagittarius Dwarf Galaxy. This unusual parentage has allowed astronomers to use the Very Large Telescope (VLT) to test whether unexpectedly low levels of the element lithium in stars are also found in stars outside the Milky Way. Image: ESO, 2014.

Messier 54 can be seen in the vicinity of two other bright globular clusters, Messier 69 and Messier 70. It is, however, roughly three times as distant.

In 2009, astronomers discovered evidence of an intermediate-mass black hole in the centre of the cluster. It was the first object of its kind ever detected in a globular cluster. The black hole has an estimated mass of 9,400 solar masses.

Messier 54 was discovered by Charles Messier on July 24, 1778. Messier included the object in his catalogue with the following description: “Very faint nebula, discovered in Sagittarius; its center is brilliant & it contains no star, seen with an achromatic telescope of 3.5 feet [FL]. Its position has been determined from Zeta Sagittarii, of 3rd magnitude.” 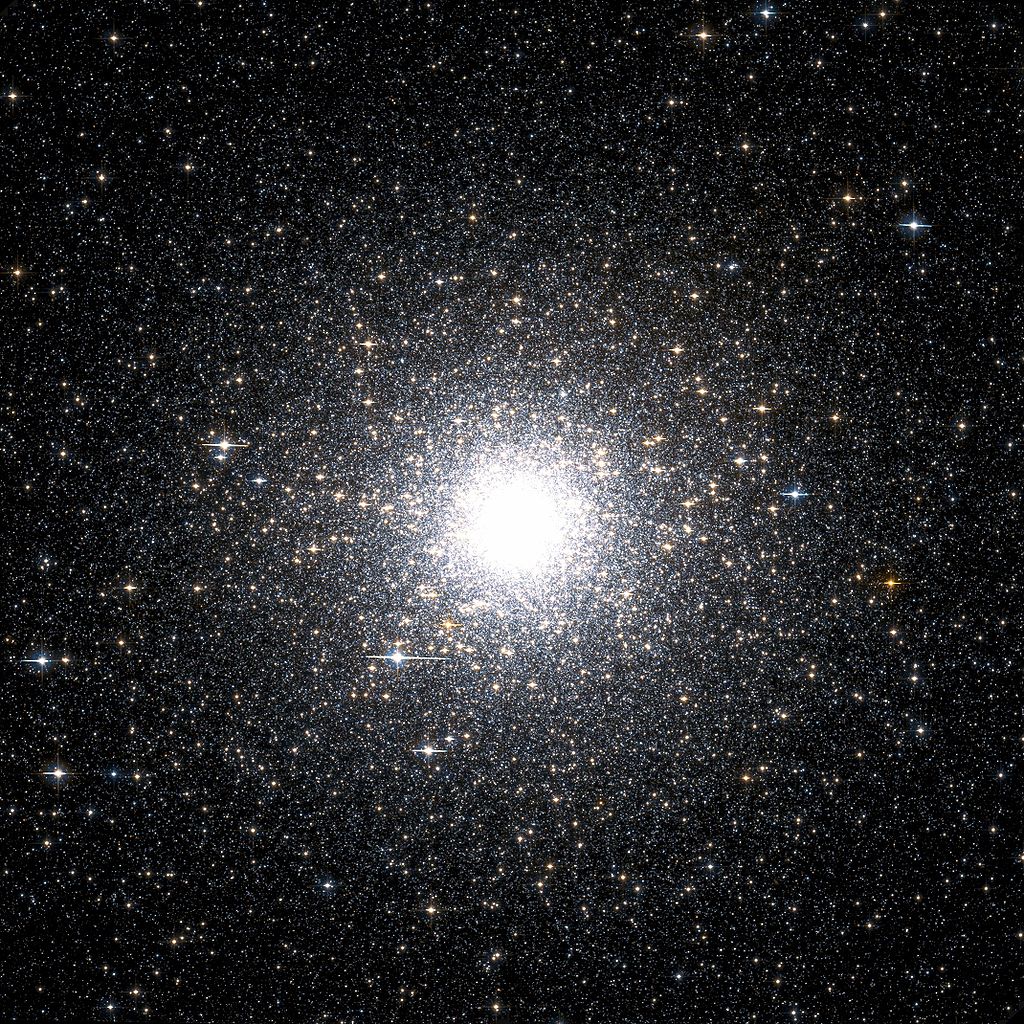 William Herschel was able to resolve the cluster’s outer regions into individual 14th and 15th magnitude stars. After observing the cluster on June 24, 1784, he wrote:

A round, resolvable nebula. Very bright in the middle and the brightness diminishing gradually, about 2 1/2′ or 3′ in diameter. 240 shows two pretty large stars in the faint part of the nebulosity, but I rather suppose them to have no connection with the nebula. I believe it to be no other than a miniature cluster of very compressed stars resembling that near the 42nd Comae [Messier 53]. It is like that under [south of] Delta Sagittarii [H I.50 = NGC 6624 – Dreyer], but rather larger and brighter tho’ not much.

John Herschel added the cluster to his catalogue as h 3763 and later included it in the General Catalogue as GC 4442. He described M54 as a “globular cluster; bright; pretty large; very little elongated; gradually brighter toward the middle; 2 1/2′ diameter; resolved into stars of 15 m, with a few outliers of 14 m.” 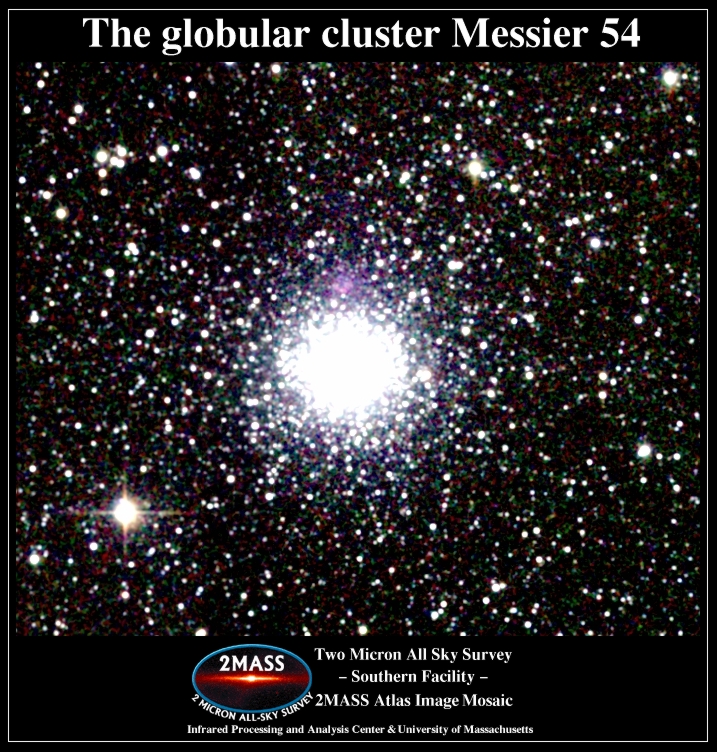 Messier 54. Atlas Image mosaic obtained as part of the Two Micron All Sky Survey (2MASS), a joint project of the University of Massachusetts and the Infrared Processing and Analysis Center/California Institute of Technology, funded by the National Aeronautics and Space Administration and the National Science Foundation. 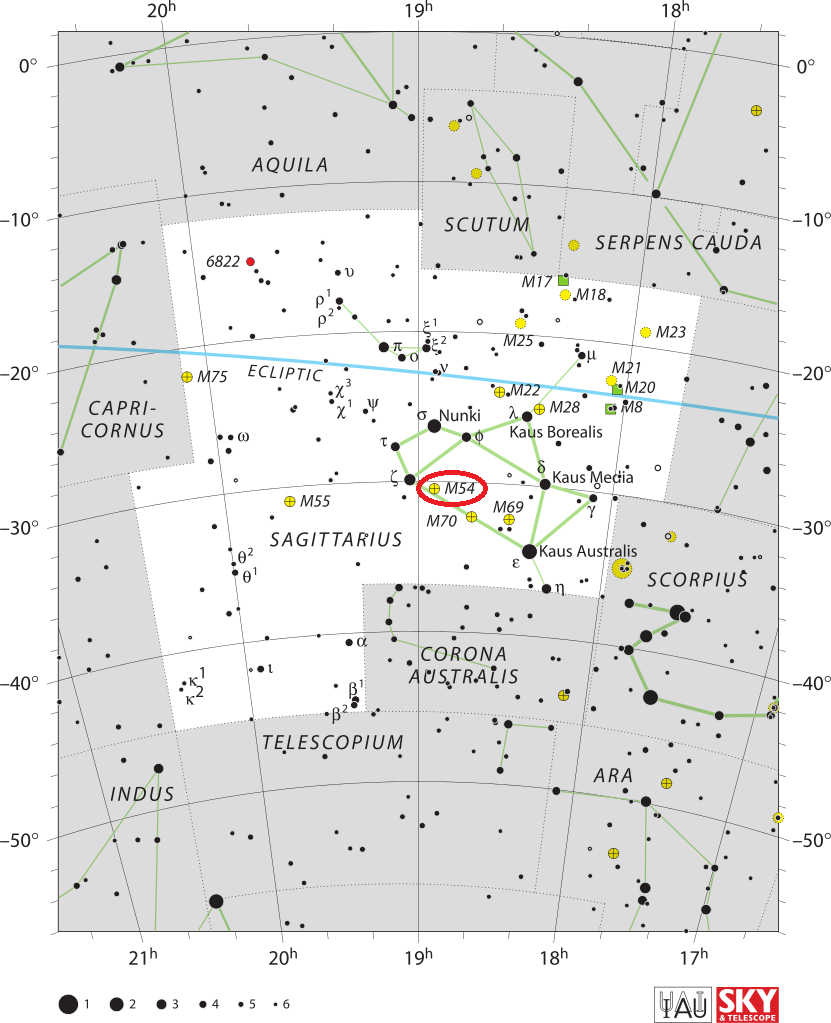