Messier 100 (M100) is a grand design spiral galaxy located in the Virgo Cluster, in the constellation Coma Berenices. The galaxy lies at an approximate distance of 55 million light years from Earth and has an apparent magnitude of 10.1. Its designation in the New General Catalogue is NGC 4321.

M100 occupies an area of 7.4 by 6.3 arc minutes of apparent sky, which corresponds to a linear diameter of 107,000 light years. Located in the southern part of Coma Berenices, it is one of the brightest and largest members of the Virgo Cluster.

The galaxy has a relatively low surface brightness and is difficult to see in small binoculars. In large binoculars and small telescopes, it appears as a dim patch of light. 8-inch telescopes show the galaxy’s bright core surrounded by nebulosity. Under good conditions, larger amateur telescopes reveal some of the galaxy’s dust structure.

Messier 100 can be found 2 degrees southeast of the magnitude 4.7 star 11 Comae Berenices, north of the line connecting the bright stars Denebola in Leo and Vindemiatrix in Virgo, and slightly closer to Denebola. The best time of year to observe M100 and other galaxies in the Virgo Cluster is during the months of March, April and May. 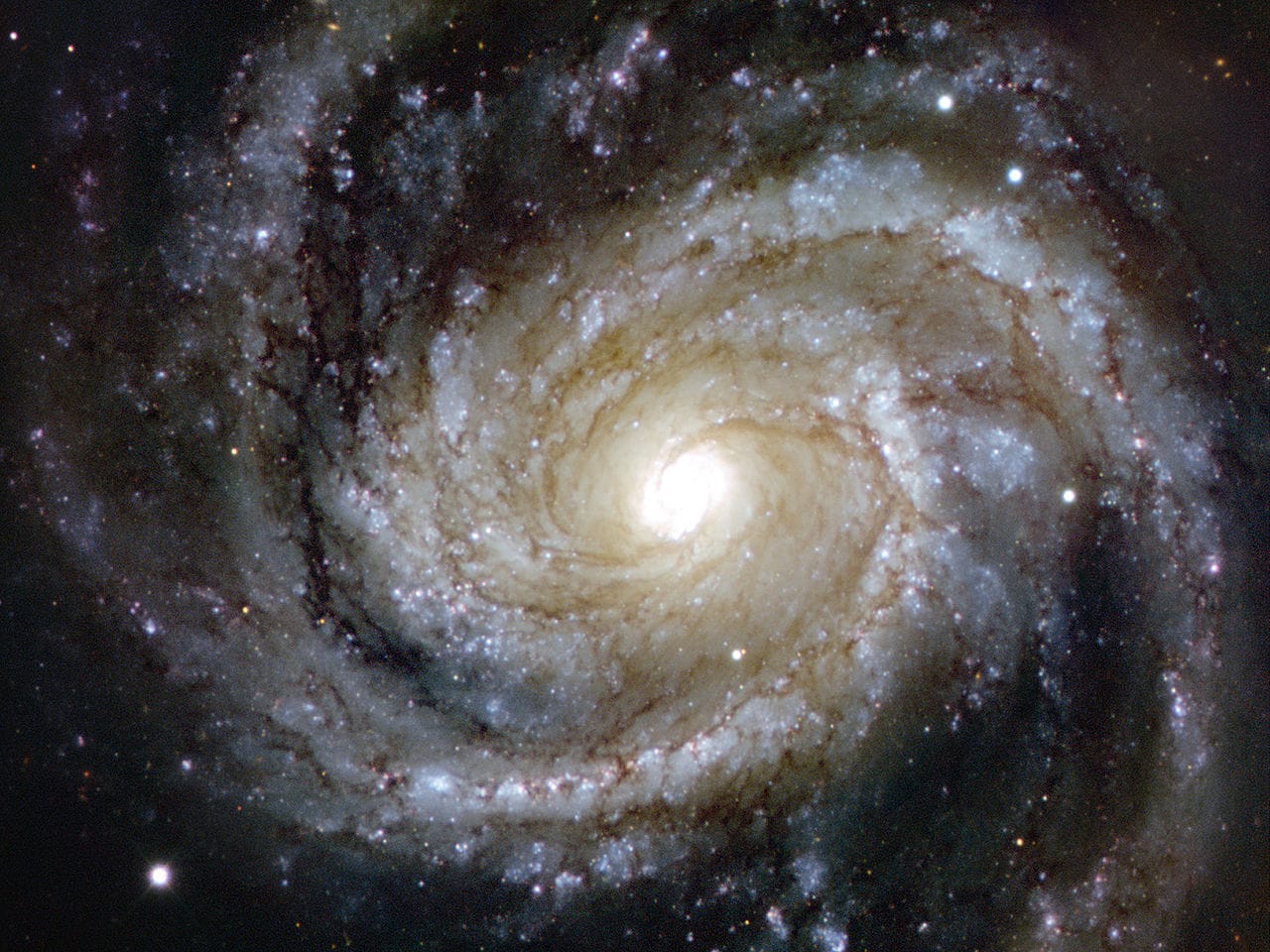 Spiral galaxies are usually very aesthetically appealing objects, and never more so than when they appear face-on. And this image is a particularly splendid example: it is the grand design spiral galaxy Messier 100, located in the southern part of the constellation of Coma Berenices, and lying about 55 million light-years from Earth. While Messier 100 shows very well defined spiral arms, it also displays the faintest of bar-like structures in the centre, which classifies this as type SAB. Although it is not easily spotted in the image, scientists have been able to confirm the bar’s existence by observing it in other wavelengths. This very detailed image shows the main features expected in a galaxy of this type: huge clouds of hydrogen gas, glowing in red patches when they re-emit the energy absorbed from newly born, massive stars; the uniform brightness of older, yellowish stars near the centre; and black shreds of dust weaving through the arms of the galaxy. Messier 100 is one of the brightest members of the Virgo Cluster, which is the closest cluster of galaxies to our galaxy, the Milky Way, containing over 2000 galaxies, including spirals, ellipticals, and irregulars. This picture is a combination of images from the FORS instrument on ESO’s Very Large Telescope at Paranal Observatory in Chile, taken with red (R), green (V) and blue (B) filters. Image: ESO

Messier 100 is a starburst galaxy, with strongest bursts of star formation concentrated within a ring in the centre of the galaxy. The ring is in fact two tightly wound spiral arms connected to a small bar with a radius of 1 kiloparsec. Star formation has been taking place in this region for at least 500 million years in several bursts. The galaxy is estimated to contain about 400 billion stars.

Messier 100 is seen almost face-on. It has two prominent, well-defined spiral arms and several fainter ones. The arms are dotted with numerous star forming regions and clusters of young, hot, blue stars. The southern side of the galaxy contains more young stars, giving M100 a slightly asymmetric appearance. The galaxy is considerably larger than it appears in conventional photographs. Deep images have revealed that a lot of the galaxy’s mass is contained in its fainter outer regions. 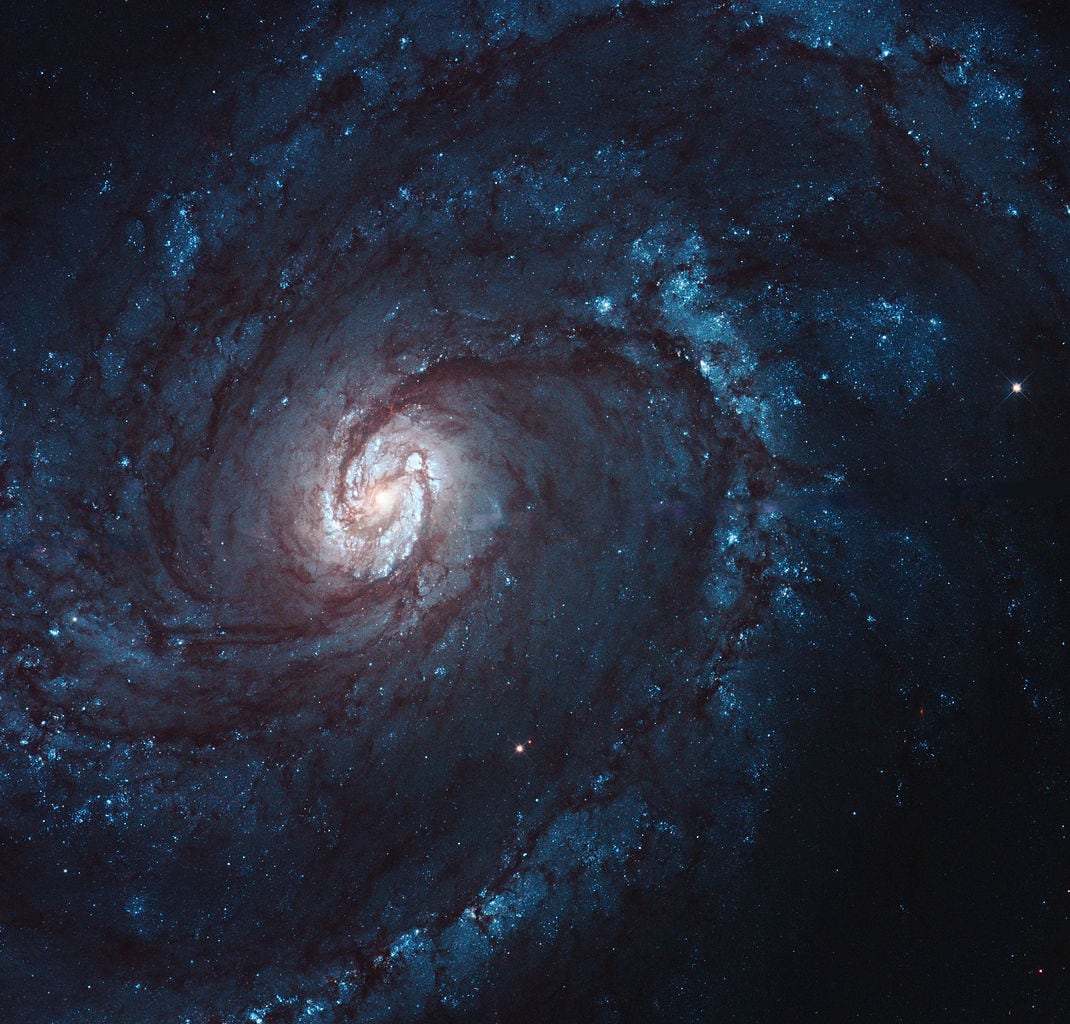 Like most spiral galaxies in the Virgo Cluster, M100 is deficient in neutral hydrogen compared to similar galaxies that are isolated. As a result, M100 is not showing signs of star formation in the rest of the disk. The galaxy is experiencing ram pressure stripping as it moves through the Virgo Cluster and the process is leaving it without gas.

Observations with the Hubble Space Telescope have revealed more than 20 Cepheid variables and a nova in M100. The Cepheids were used to measure the distance to the galaxy. 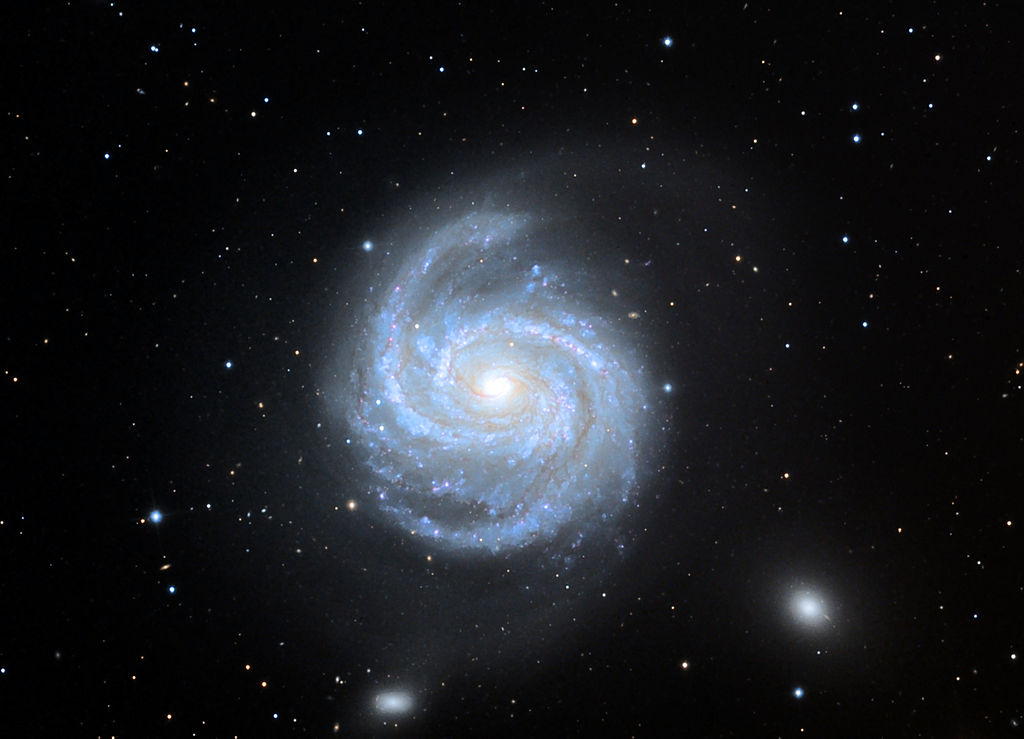 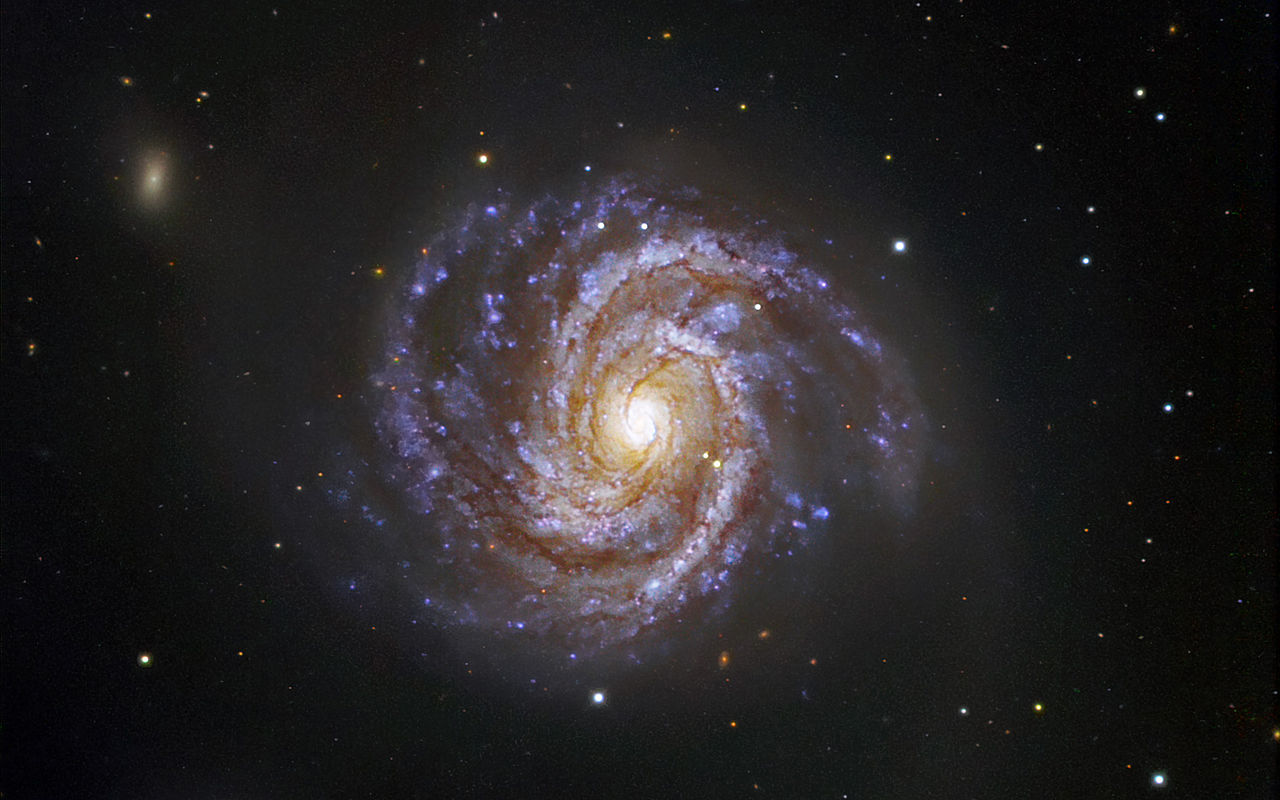 Messier 100 was discovered by Pierre Méchain on March 15, 1781, along with the nearby galaxies Messier 98 and Messier 99. Charles Messier determined the position for the object and added it to his catalogue on April 13, 1781, just before he completed the third and final edition. Messier noted:

Nebula without star, of the same light as the preceding [Messier 99], situated in the ear of Virgo. Seen by M. Méchain on March 15, 1781. The three nebulae, nos. 98, 99 & 100, are very difficult to recognize, because of the faintness of their light: one can observe them only in good weather, & near their passage of the Meridian.

William Herschel described M100 as a “nebula of about 10′ in diameter,” adding that “there is in the middle of it, a small, bright cluster of supposed stars.” 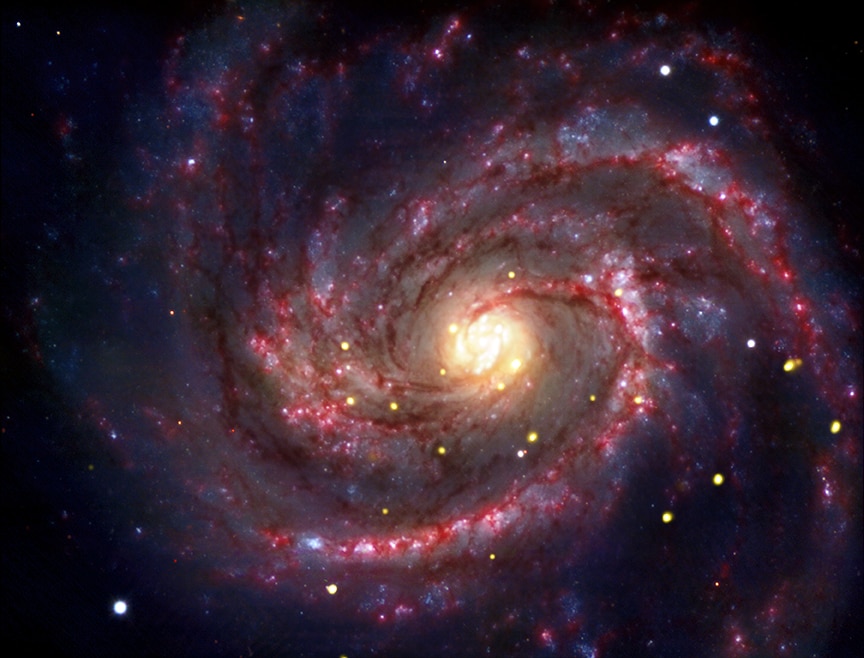 John Herschel catalogued M100 as h 1211 and later included it in the General Catalogue as GC 2890, describing it as “very remarkable; pretty faint; very large; round; very gradually, then pretty suddenly brighter toward the middle where there is a mottled nucleus.”

A round nebula, pearly white, off the upper part of the Virgin‘s left wing, and certainly at a great distance from Virgo‘s ear of corn, where the Connaissance des Temps places it: indeed, the true site will be hit upon just one-fifth the way from Beta Leonis towards Arcturus. This is a large but pale object, of little character, though it brightens from its attenuated edges towards the centre; and is therefore proved to be globular. It was discovered by M. Méchain in 1781, and is accompanied by four small stars, at a little distance around it; besides minute points of light in the field, seen by occasional gleams.

We are now in the broad grand stratum of nebulae, which lies in a direction almost perpendicular to the Galaxy [Milky Way], and passes from the south, through Virgo, Berenice’s Hair, Canes Venatici, and the Great Bear, to the Pole, and beyond. This glorious but mysterious zone of diffused spots, is an indisputable memorial to all future times, of the unwearied industry and indomitable scientific energy of Sir William Herschel. Yet has this unrivalled contributor to knowledge been disparagingly described, as a man indulging in “speculations of no great value to astronomy, rather than engage in computations by which the science can really be benefitted.” Save the mark! This is said of a philosopher of zeal and application hitherto unequalled: one whose contributions to the Philosophical Transactions prove the bold but circumspect grandeur of his conceptions, his consummate mechanical resources, and the exactness of his elaborate calculations. Herschel’s labour, however, transcended those of the ages in which he was cast, although he gave such animation and bias to sidereal astronomy that his mantle was caught at. 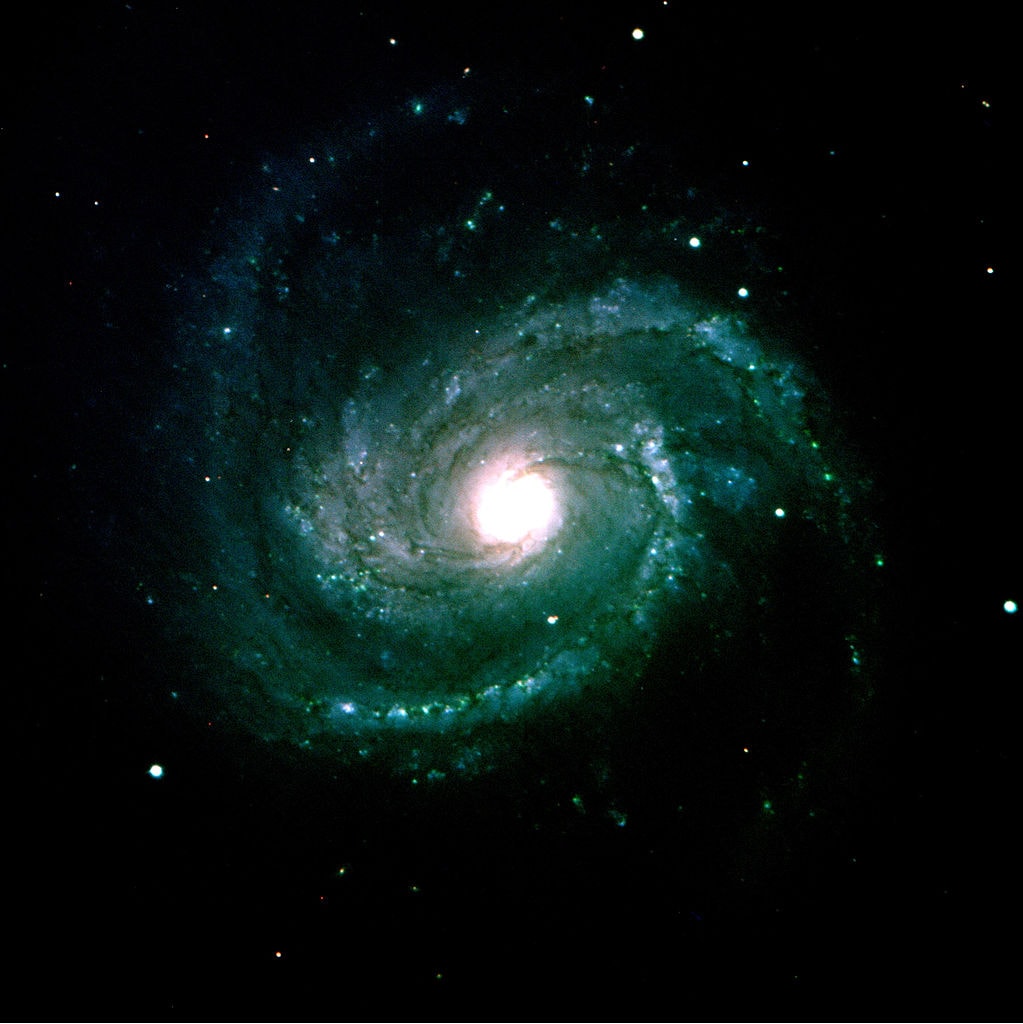 Messier 100, also known as NGC 4321, is one of the largest and brightest spiral galaxies in the sky, located at about 50 million light-years from us. A composite VRI image obtained on March 3, 2002. The individual exposures lasted 180 seconds, image quality 0.7 arcsec FWHM; field 7 x 7 arcmin2 ; North is up and East is left. Image: ESO

Messier 100 was one of the first spiral galaxies to be identified as such. William Parsons, 3rd Earl of Rosse, included it on his list of 14 “spiral nebulae” discovered to 1850. Other Messier galaxies listed by Rosse were Messier 58, Messier 63 (Sunflower Galaxy), Messier 74 (Phantom Galaxy), Messier 77 (Cetus A), Messier 88 and Messier 96.

Heber Curtis photographed M100 with the Crossley reflecting telescope at the Lick Observatory and noted:

A bright, regular, nearly round spiral 5′ in diameter. Very faint stellar nucleus surrounded by bright, short whorls, forming a central oval. The outer whorls are rather open, quite regular, and show many stellar condensations. Two novae have appeared in this spiral. M. 100. 15 s.n. 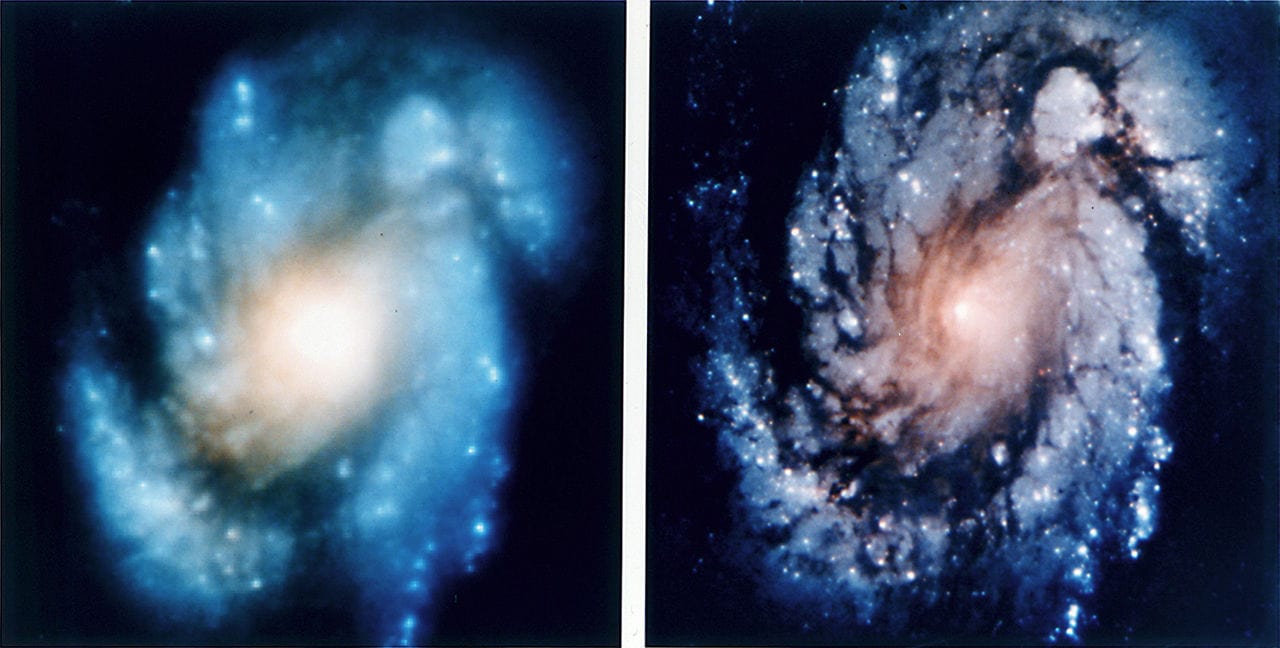 Images of the spiral galaxy Messier 100 demonstrate the improvement in Hubble images after corrective optics were installed during Servicing Mission 1 in 1993. Images: NASA/ESA 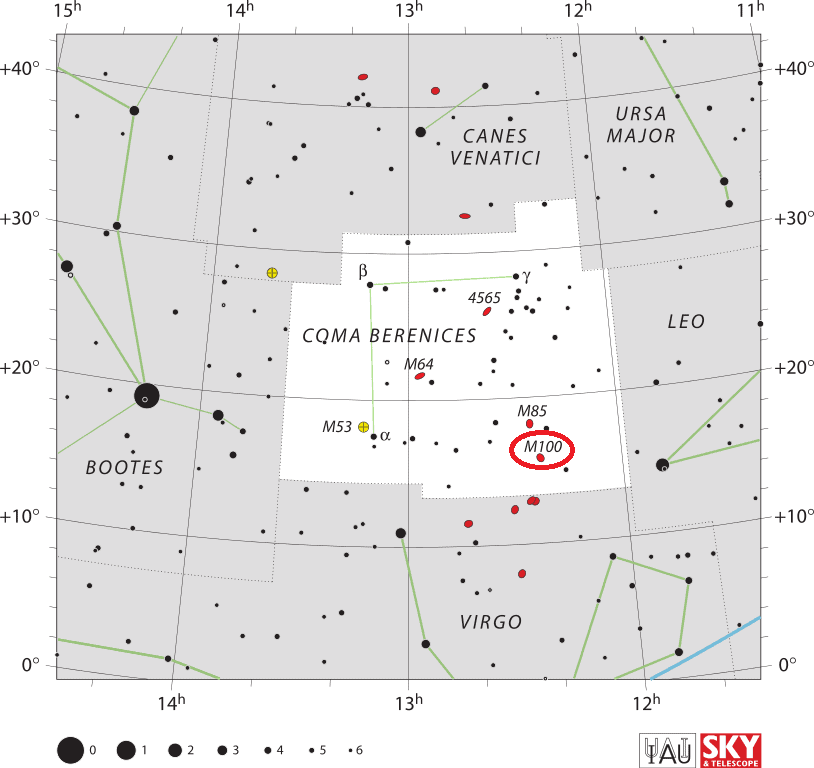