Messier 80 (M80) is a globular cluster located in the southern constellation Scorpius. The cluster has an apparent magnitude of 7.87 and lies at a distance of 32,600 light years from Earth. It has the designation NGC 6093 in the New General Catalogue.

Messier 80 has an apparent diameter of 10 arc minutes, corresponding to a spatial extension of 96 light years. It can be seen in small and medium-sized telescopes, which show a fuzzy ball of light. 8-inch telescopes show the cluster’s bright nucleus and extended halo, and larger instruments are required to resolve individual stars in the cluster. 12-inch telescopes will reveal the brightest members.

Messier 80 is pretty easy to find as it lies about halfway between the bright stars Antares, Alpha Scorpii, and Akrab (Graffias), Beta Scorpii.

It is located 4 degrees to the northwest of Antares, in the same region of the sky as Messier 4, another globular cluster in Scorpius.  The best time of year to observe M80 is during the summer, when Scorpius is prominent in the evening sky.

With a density classification of II, M80 is one of the most densely populated globular clusters in our galaxy. It has an estimated age of 12.54 billion years. 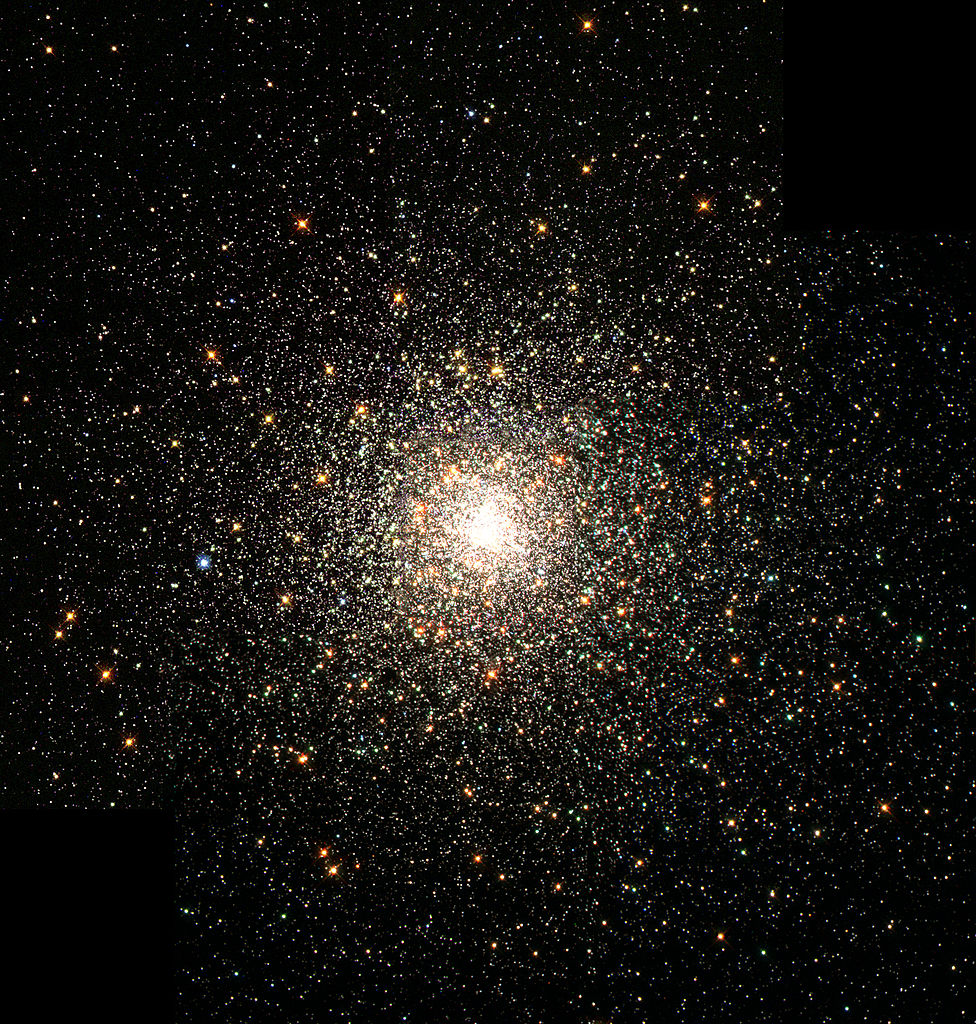 This stellar swarm is M80 (NGC 6093), one of the densest of the 147 known globular star clusters in the Milky Way galaxy. Located about 28,000 light-years from Earth, M80 contains hundreds of thousands of stars, all held together by their mutual gravitational attraction. Globular clusters are particularly useful for studying stellar evolution, since all of the stars in the cluster have the same age (about 15 billion years), but cover a range of stellar masses. Every star visible in this image is either more highly evolved than, or in a few rare cases more massive than, our own Sun. Especially obvious are the bright red giants, which are stars similar to the Sun in mass that are nearing the ends of their lives. Image: NASA, The Hubble Heritage Team, STScI, AURA

Messier 80 contains at least 200,000 stars, including a considerable number of blue stragglers. These are old stars that appear younger, bluer and more massive than other members of the cluster as a result of collisions and close interactions with neighbouring stars, which left them stripped of their cooler outer envelopes. In 1999, observations with the Hubble Space Telescope revealed that M80 contained about twice as many blue stragglers in its central region than any other globular previously investigated with the Hubble.

A nova was detected in M80 by the German astronomer Arthur von Auwers on May 21, 1860. It was the first nova ever seen in a globular cluster. The nova, which was given the variable star designation T Scorpii, reached a visual magnitude of 7.0 and an absolute magnitude of -8.5, which means that it had a luminosity of more than 200,000 times that of the Sun. At its peak, the nova outshone the entire cluster and changed its appearance for several days. On June 16, it faded to magnitude 10.5.

Novae are believed to occur on the surface of white dwarf stars in a close binary system. The white dwarfs pull material from the companions and the accretion of hydrogen on their surface causes a fusion reaction.

Observations with the Hubble Space Telescope have revealed only two nova-like interacting binary stars in M80, considerably fewer than expected, considering the collision rate in the cluster’s core.

Messier 80 also contains a significant number of radio pulsars, rotating neutron stars emitting beams of electromagnetic radiation that can only be detected when the beams are pointing in our direction.

The cluster was discovered by Charles Messier on January 4, 1781. Messier included the object in his catalogue and wrote:

Nebula without star, in Scorpius, between the stars g. [now Rho Ophiuchi] and Delta, compared to g to determine its position: this nebula is round, the center brilliant, & it resembles the nucleus of a small Comet, surrounded with nebulosity. M. Méchain saw it on January 27, 1781. 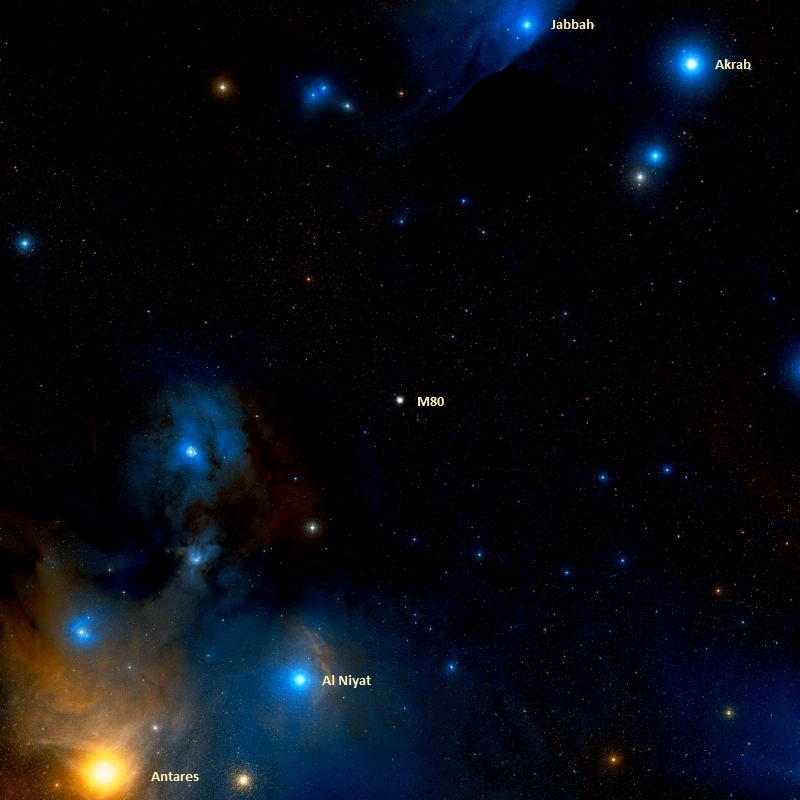 William Herschel was able to resolve M80 into individual stars before 1785. After seeing it in his 20-foot telescope, he described M80 as a “globular cluster of extremely minute and very compressed stars of about 3 or 4 minutes in diameter; very gradually much brighter in the middle; towards the circumference the stars are distinctly seen, and are the smallest imaginable.”

A compressed globular cluster of very minute stars, on the right foot of Ophiuchus, which is on Scorpio‘s back. This fine and bright object was registered by Messier in 1780, who described it as resembling the nucleus of a comet; and indeed, from the blazing centre and attenuated disc, it has a very cometary aspect. There are some small stars both above and below its following parallel, of which three of those in the nf [north following, NE] form a coarse triangle; but the field and the vicinity are otherwise barren. An early star of Ophiuchus, No. 17 P. XVI., slightly precedes this splendid conglomerate, about half a degree to the northward, and though only of the 8th magnitude, is a convenient index to approach to the out-door gazer. Such particulars are not needed by the man with fixed instruments, but will greatly facilitate the operations of those who are more remarkable for intellectual energy than for means.

The mean apparent place is differentiated from Delta Scorpii, from which it lies east, at 4deg distance; and it is mid-way between Alpha and Beta Scorpii.

This is a very important object when nebulae are considered in their relations to the surrounding spaces, which spaces, Sir William Herschel found, generally contain very few stars: so much so, that whenever it happened, after a short lapse of time, that no star came into the field of his instrument, he was accustomed to his assistant, “Make ready to write, Nebulae are just approaching.” Now our present object is located on the western edge of a vast obscure opening, or space of 4deg in breadth, in which no stars are to be seen; and Sir William pronounced 80 Messier, albeit it had been registered as nébuleuse sans étoiles [nebula without stars], to be the richest and most condensed mass of stars which the firmament can offer to the contemplation of astronomers.

John Herschel catalogued the cluster as h 3624 and later included it in the General Catalogue as GC 4173, describing it as “magnificent; globular cluster; very bright; large; very much brighter toward the middle (where there is a variable star); well resolved; stars of 14th magnitude.” The variable star he was referring to was probably the nova. 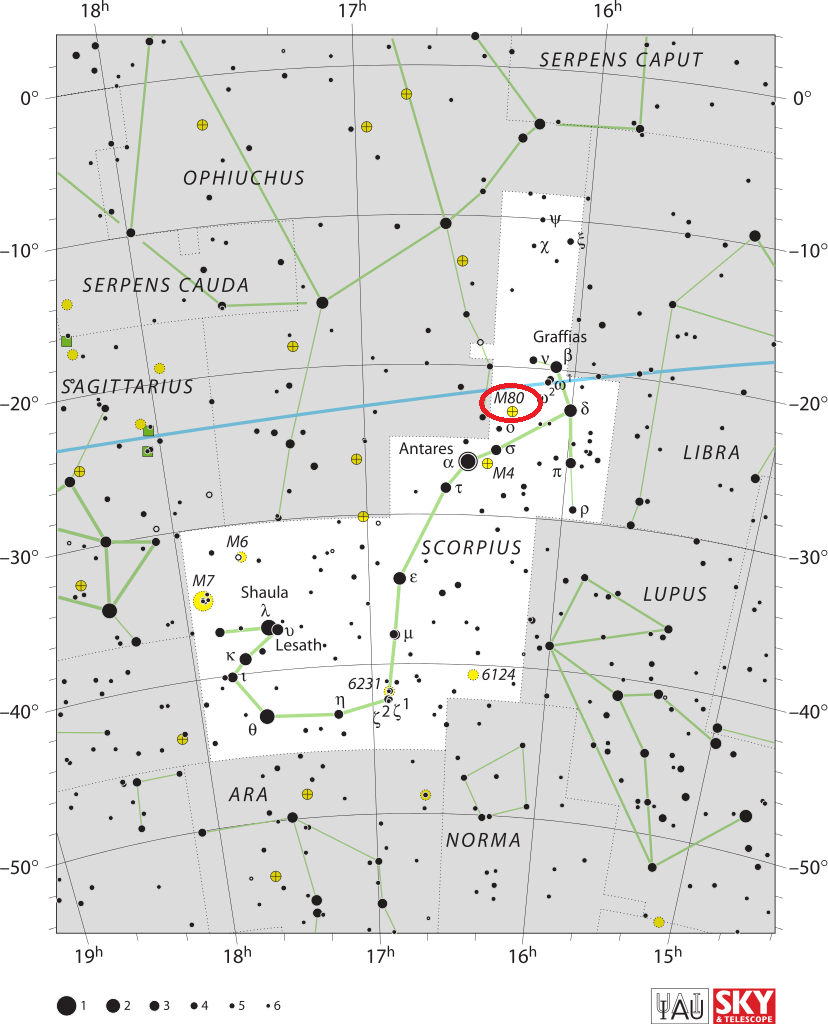