Messier 108 (M108), nicknamed the Surfboard Galaxy, is a barred spiral galaxy located in the constellation Ursa Major. The galaxy lies at an approximate distance of 45.9 million light years from Earth and has an apparent magnitude of 10.7. It has the designation NGC 3556 in the New General Catalogue.

Messier 108 occupies an area of 8.7 by 2.2 arc minutes of apparent sky, corresponding to a spatial diameter of 110,000 light years. The galaxy is inclined 75 degrees to our line of sight. Even though it appears almost edge-on, M108 is a popular target among amateur astronomers and astrophotographers because details of its structure can be seen even in amateur telescopes. 3-inch telescopes will only reveal an elongated streak of light with a brighter core, while 8-inch instruments will hint at the galaxy’s dusty regions and bright and faint patches.

The galaxy is easy to find as it lies only 1.5 degrees southeast of the magnitude 2.37 star Merak, Beta Ursae Majoris, one of the Pointer Stars in the Big Dipper. M108 appears in the same wide field of view with the Owl Nebula (M97), which is located only 48 arc minutes southeast of the galaxy.  The best time of year to observe M108 is during the spring.  The galaxy is circumpolar north of latitude 35N and can be seen throughout the year. 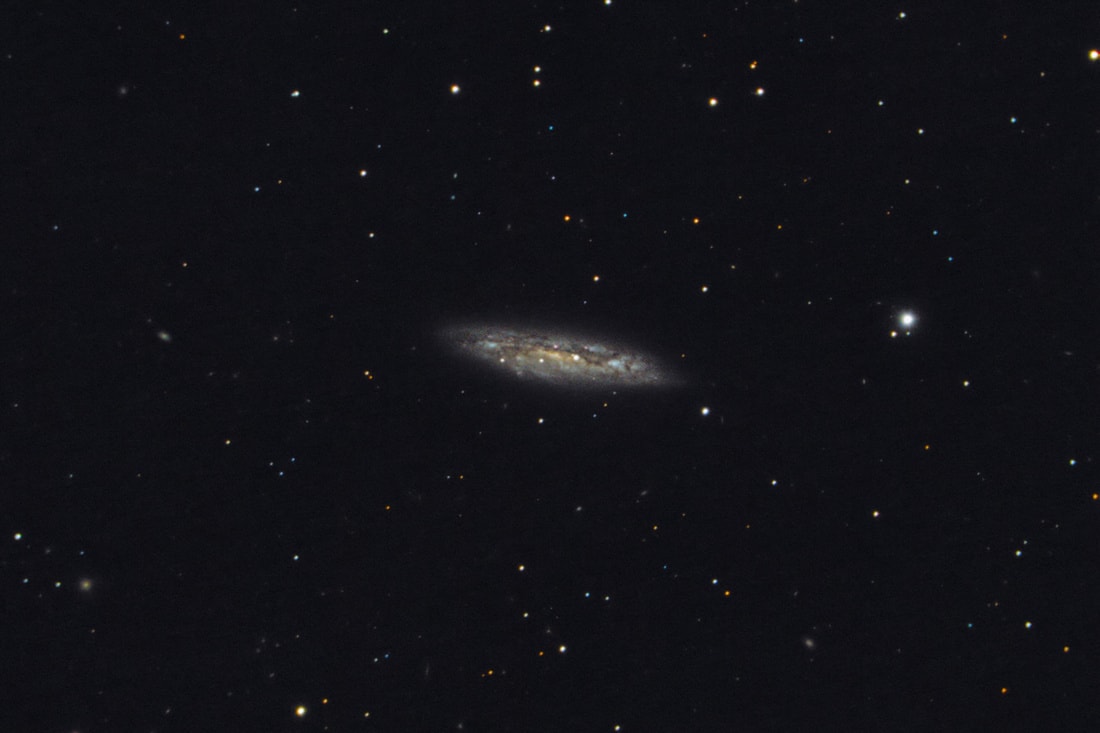 Messier 108 has the morphological classification SBbc, which means that it is a barred spiral galaxy with somewhat loosely wound spiral arms. The galaxy does not have a pronounced core or bulge, but appears very mottled and dusty, with few H II regions and clusters of young stars. The dust structures are prominent in the galaxy’s disk and very thick in front of its bulge. The central region of M108 is bright and irregular, with a large central bar.

The estimated mass of M108 is about 125 billion solar masses. The galaxy contains about 400 billion stars and an estimated population of 290 globular clusters. M108 is receding from us at 699 km/s.

Messier 108 also contains H1 supershells, shells of expanding gas driven either by bursts of star formation and the resulting supernova explosions, or by infall of gas from outside the galaxy, or possibly by radio jets. The H1 supershells in M108 extend for several kiloparsecs. 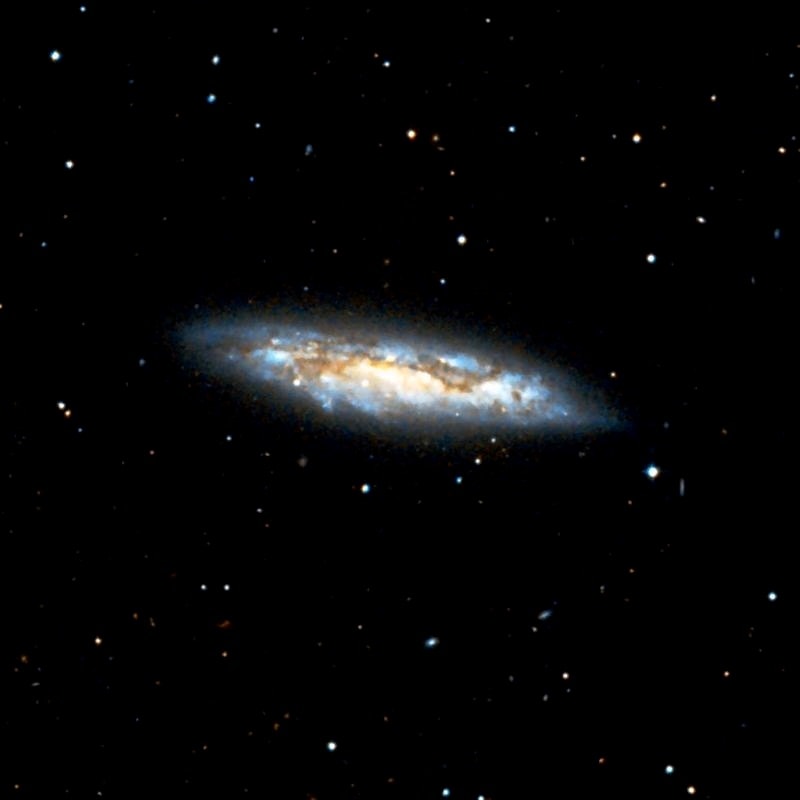 Messier 108 contains 83 X-ray sources, discovered by the Chandra X-ray Observatory. One of these sources was found at the nucleus and its spectrum indicates an active galactic nucleus (AGN). However, observations with the Spitzer Space Telescope have not confirmed this. The brightest X-ray source in M108 is suspected to be an intermediate-mass black hole that is accreting matter. Diffuse soft X-ray radiation was discovered within 10 kiloparsecs of the optical galaxy.

Messier 108 is one of the brightest, largest members of the Ursa Major Cluster, a cluster of galaxies located in the Virgo Supercluster. M108 is an isolated member of the group. 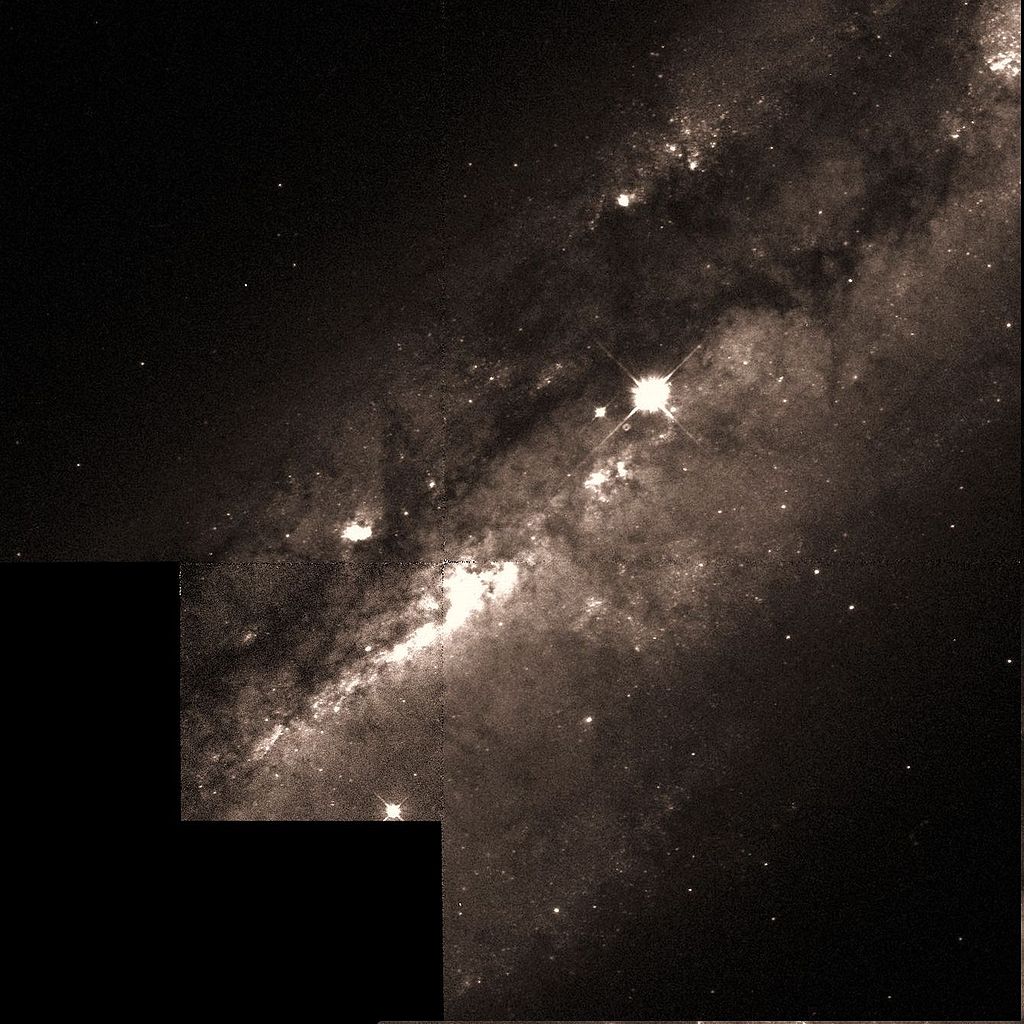 Messier 108 was discovered by the French astronomer Pierre Méchain on February 19, 1781, only three days after he had found the Owl Nebula (M97). Charles Messier observed both M108 and M109 on March 24, 1781, when he determined the position for M97. However, Messier did not measure the positions of M108 and M109 at the time and only added them to his hand-written list of objects. He determined the position for both objects much later and included them in his personal copy of the catalogue. He wrote:

A nebula near Beta in the Great Bear. Mr. Messier mentions, when indicating its position, two others, which I also have discovered and of which one is close to this one [Messier 108], the other is situated close to Gamma in the Great Bear [Messier 109], but I could not yet determine their positions. 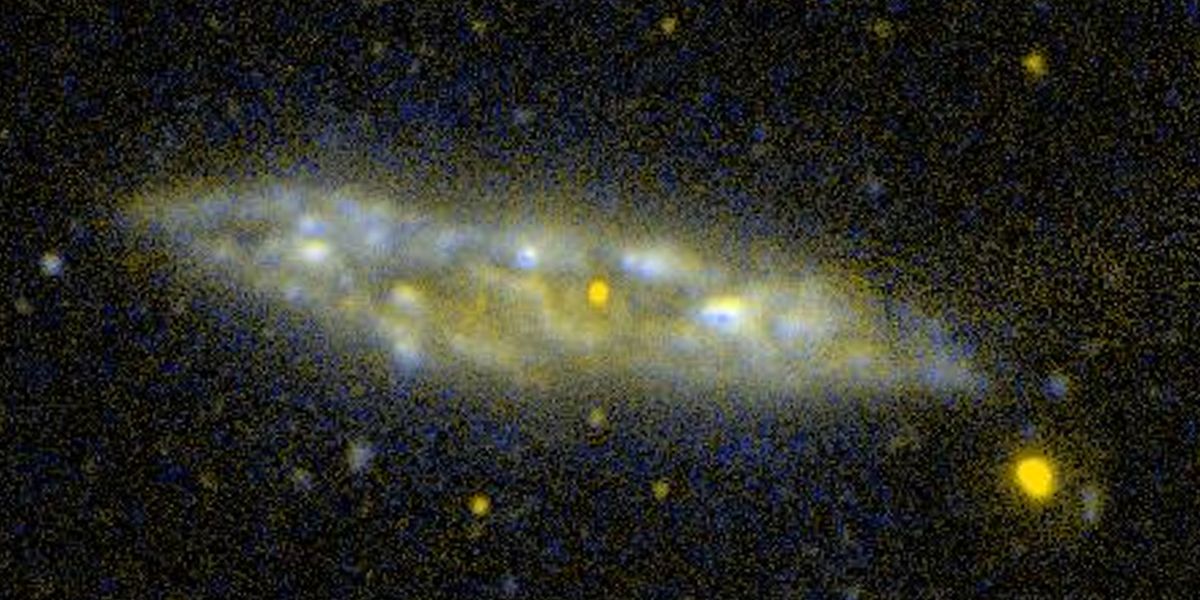 William Herschel discovered M108 independently on April 17, 1789 and added it to his catalogue as H V.46. He noted:

Very bright. Much extended [elongated]. Resolvable [mottled, not resolved]. 10′ long, 2′ broad. There is an unconnected pretty bright star in the middle.

John Herschel catalogued the object as h 831 and later included it in the General Catalogue as GC 2318. He described M108 as “extremely bright; very large; very much extended in position angle 79 deg; pretty bright toward the middle; mottled.”

A large milky-white nebula, on the body of the Great Bear, with a small star at its sp [south preceding, SW] apex, and an 8th-magnitude preceding [W] it at double the distance; there is also a brightish group in the np [north preceding, NW] quadrant. It is easily found, since it lies only about 1 deg south-east of Beta, Merak. This object was discovered by H. [William Herschel] in April, 1789; and is No. 831 of his son’s Catalogue. It is faint but well defined, being much elongated with an axis-major trending sp [south preceding, SW] and nf [north following, NE] across the parallel, and a small star, like a nucleus, in its center. As H. [WH] considers this star to be unconnected with the nebula, it follows that it is between us and it, and therefore strengthens to confirmation our belief in the inconceivable remoteness of those mysterious bodies.

Heber Curtis photographed M108 with the Crossley reflector at the Lick Observatory and noted:

An irregular, patchy spiral 8’x1.5′ in p.a. 84deg; quite bright. Has a faint nucleus and shows a number of condensations, three of which are almost stellar; a star of magn. 11 near the nucleus. See Abs. Eff. 4 s.n.

M108 was finally included in the Messier Catalogue by the American astronomer Owen Gingerich in 1953. Gingerich identified M108 as NGC 3556 and wrote:

Although Flammarion found Messier’s notation of the position of the nebula near Gamma Ursae Majoris […] he made no attempt to number it, and because Méchain did not give precise positions, Dr. Hogg omitted identifications of this and the other nebula near Beta Ursae Majoris. From my study of this region, the nebula near Beta is unambiguously NGC 3556, while an examination of the critical limiting magnitude of the catalogue indicates that the one near Gamma must be NGC 3992, a fact confirmed by the position Messier added to his personal copy. Thus, if the objects from M104 to M107 are included, it seems logical to me to number NGC 3556 and NGC 3992 as M108 and M109 respectively, especially as they are mentioned in the original catalogue. 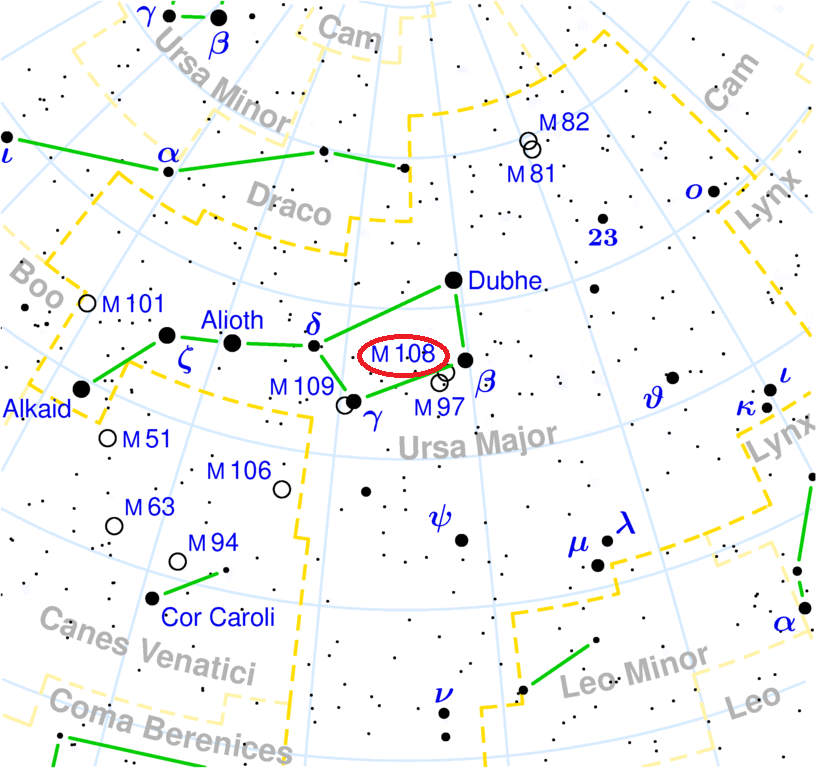