Messier 44 (M44), also known as the Beehive Cluster or Praesepe (the Manger), is an open star cluster in the constellation Cancer. Praesepe is a bright, large cluster with an apparent magnitude of 3.7. It lies at a distance of 577 light years from Earth. It has the designation NGC 2632 in the New General Catalogue.

M44 is one of the nearest open clusters to Earth and can easily be seen without binoculars. It appears as a blurry patch of light to the naked eye. The cluster is best seen in binoculars and small telescopes. Occupying an area 95 arc minutes across, it fits in the field of view of binoculars and low power telescopes. Larger telescopes reveal more than 200 stars in the cluster.

The best time of year to observe the Beehive Cluster is from February to May, when Cancer rises high in the sky for northern observers.

The constellation is pretty faint, but it lies between two considerably brighter zodiac constellations, Leo to the east and Gemini to the west.

Another faint constellation, Lynx, lies to the north, while Canis Minor, with the bright star Procyon, lies to the south of M44. An easy way to find the cluster is to draw a line from Pollux in Gemini to Regulus in Leo. M44 lies about halfway along the line. 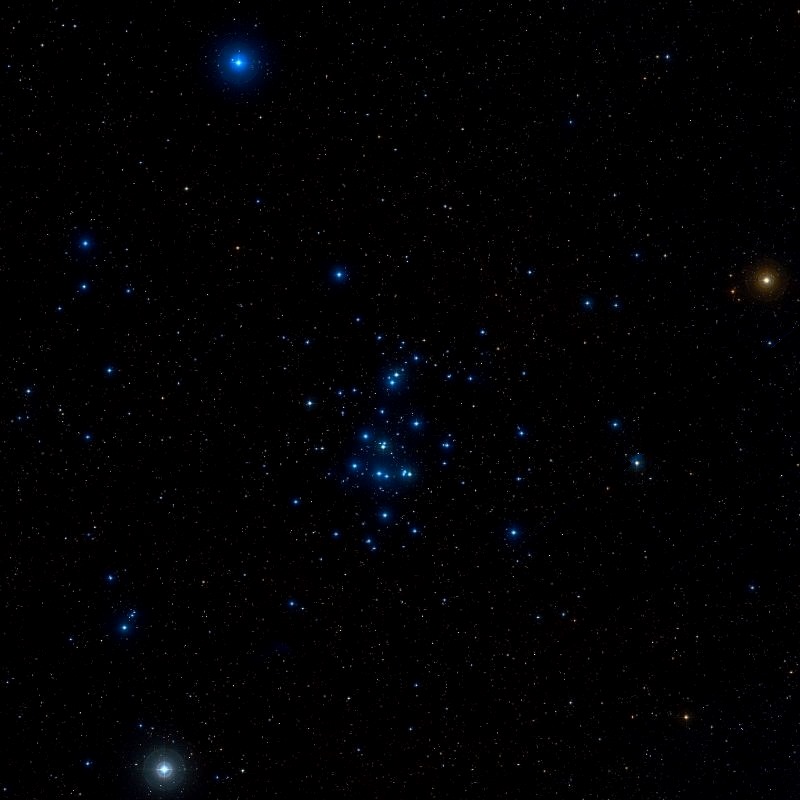 Praesepe is one of the brightest Messier objects and has been known since ancient times. The only objects on Messier’s list that are brighter than M44 are the Pleiades cluster (M45) and the Andromeda Galaxy (M31). The Pleiades are also the only deep sky object in Messier’s catalogue that is nearer to us than the Beehive Cluster. Winnecke 4 (M40), which is also closer, is a double star and not a deep sky object.

Praesepe has a similar age and proper motion to the Hyades, the nearest open cluster to the solar system, which lies in the same line of sight as the bright star Aldebaran in Taurus constellation. The two clusters likely share a similar origin.

The bright central core of M44 has a linear diameter of 22.8 light years (7 parsecs). The cluster’s half-mass radius is 12.7 light years (3.9 parsecs), and the tidal radius, the point beyond which stars are not gravitationally bound to the cluster, spans about 39 light years (12 parsecs).

Praesepe contains at least 1,000 stars and has a mass between 500 and 600 times solar. About 68 percent of the members are M-class (red) dwarfs, 30 percent are of spectral types F, G and K, and 2 percent of the members are bright, A-class stars. Five giants have also been identified in the cluster: one with the stellar classification G0 III and four belonging to the spectral class K0 III. Researchers have also found 11 white dwarfs.

The brightest stars in M44 have a visual magnitude of 6 to 6.5 and appear blue-white in colour.

Messier 44 has experienced mass segregation, a process often seen in star clusters and other gravitationally bound systems (e.g. galaxy clusters), by which heavier objects move toward the centre, while lighter ones move away from the centre. The bright, massive stars of M44 are now concentrated in the central region of the cluster while the fainter, less massive members are found in the halo. 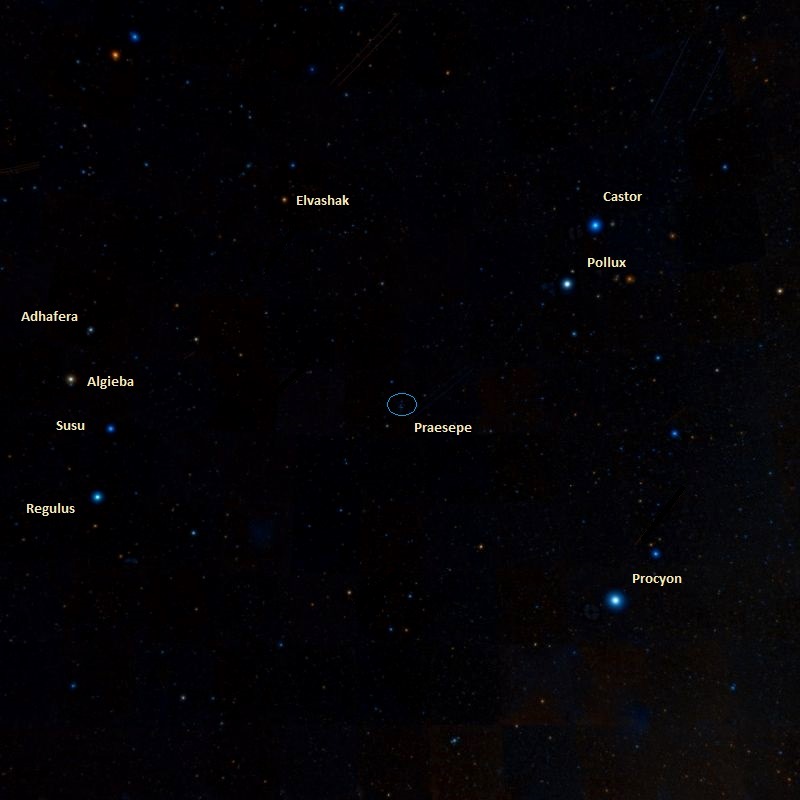 In 2012, scientists discovered two planets orbiting two separate stars in the Beehive Cluster. These were the first planets discovered orbiting Sun-like stars in a star cluster. The planets, designated Pr0201b and Pr0211b, are hot Jupiters, extrasolar gas giants with characteristics similar to Jupiter and high surface temperatures because they have a much closer orbit to their parent stars. These planets are also known as roaster planets, epistellar jovians or pegasids.

Messier 44 is a prominent deep sky object and has been known since ancient times. Greek poet and philosopher Aratus mentioned Praesepe (the Manger) in his poem Phainomaina or Phainomena (Heavenly Phenomena, or Appearances) in 260 B.C.:

Watch, too, the Manger. Like a faint mist in the North it plays the guide beneath Cancer. Around it are borne two faintly gleaming stars, not far apart nor very near but distant to the view a cubit’s length, one on the North, while the other looks towards the South. They are called the Asses, and between them is the Manger. On a sudden, when all the sky is clear, the Manger wholly disappears, while the stars that go on either side seem nearer drawn to one another: not slight then is the storm with which the fields are deluged. If the Manger darken and both stars remain unaltered, they herald rain. But if the Ass to the North of the Manger shine feebly through a faint mist, while the Southern Ass is gleaming bright, expect wind from the South: but if in turn the Southern Ass is cloudy and the Northern bright, watch for the North wind. 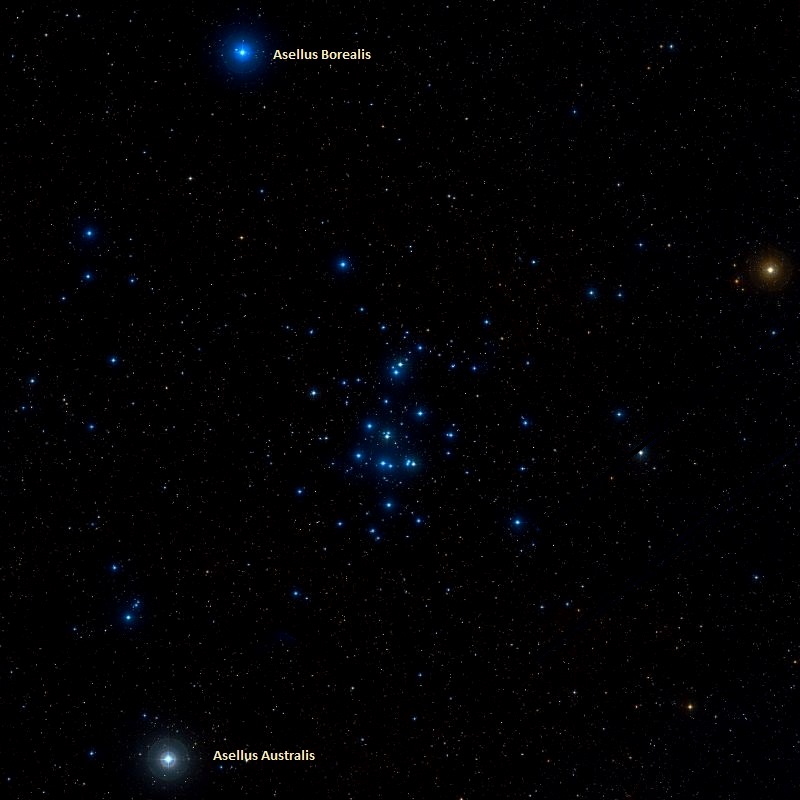 Greek and Roman observers saw the cluster as a manger from which two donkeys are eating. The donkeys, represented by the nearby stars Asellus Borealis and Asellus Australis (Gamma and Delta Cancri), were the mythical animals on which the god Dionysus and his companion Silenus rode into battle against the Titans. In the myth, the Titans were frightened by the donkeys’ braying, which helped the gods win the battle. The donkeys were placed in the sky as a reward, along with the Manger, or Phatne in Greek.

Greek astronomer Claudius Ptolemy (AD 90 – 168) also documented the cluster, calling it “the nebulous mass in the breast of Cancer.”

Messier 44 was one of the first deep sky objects that Galileo Galilei studied with his telescope in 1609. He was able to resolve 40 stars. He wrote, “The nebula called Praesepe contains not one star only but a mass of more than 40 small stars. We have noted 36 besides the Aselli [Gamma and Delta Cancri].” 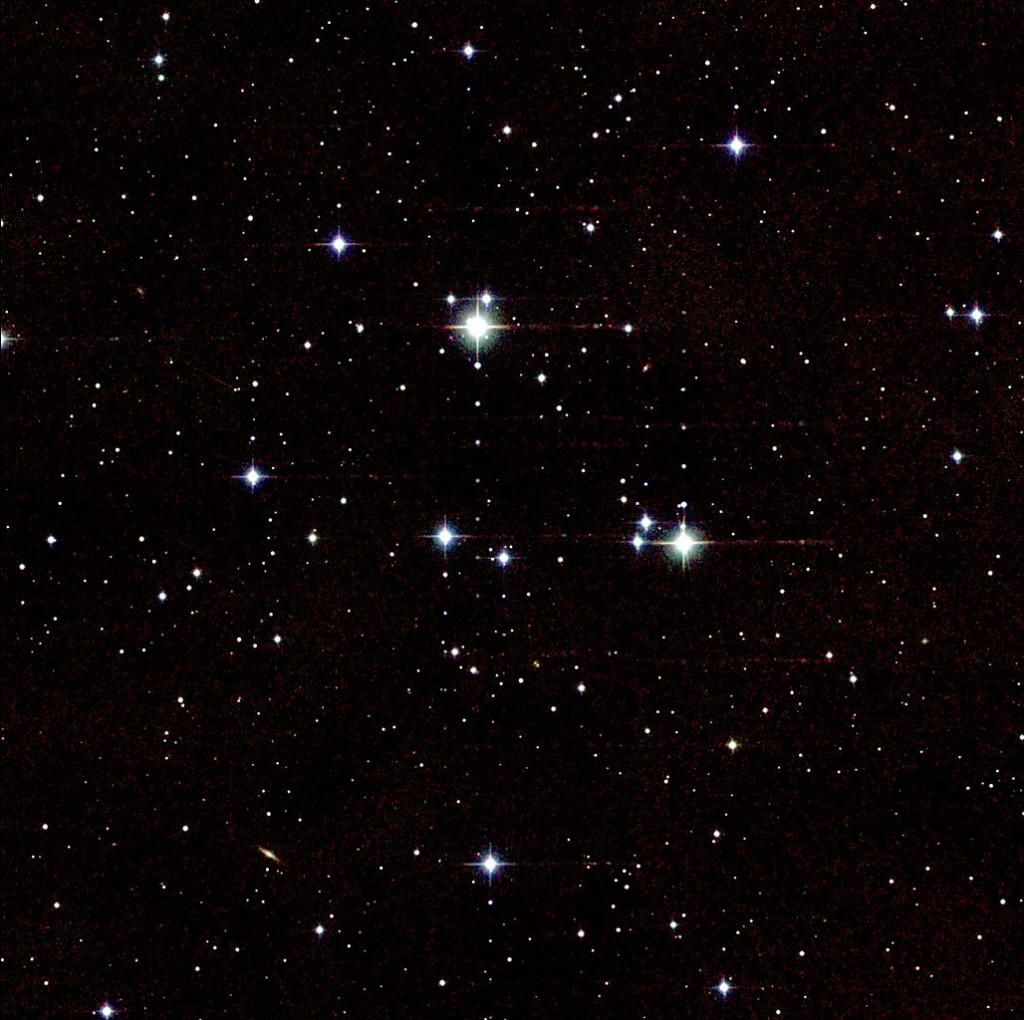 Beehive Cluster. Atlas Image obtained as part of the Two Micron All Sky Survey (2MASS), a joint project of the University of Massachusetts and the Infrared Processing and Analysis Center/California Institute of Technology, funded by the National Aeronautics and Space Administration and the National Science Foundation.

Charles Messier added the Beehive Cluster to his catalogue on March 4, 1769, describing it as a “cluster of stars known by the name of the nebula in Cancer.” In the first edition of the Messier catalogue, he noted:

At simple view [with the naked eye], one sees in Cancer a considerable nebulosity: this is nothing but a cluster of many stars which one distinguishes very well with the help of telescopes, & these stars are mixed up at simple view because of their great proximity. The position in right ascension of one of the stars, which Flamsteed has designated with the letter c, reduced to March 4, 1769, should be 126d 50′ 30″, for its right ascension, & 20d 31′ 38″ for its northern declination. This position is deduced from that which Flamsteed has given in his catalog.

Like the Pleiades (M45) and the Orion Nebula (M42), Praesepe was a well known deep sky object at the time, one not easily confused for a comet. For this reason, Messier’s inclusion of these famous objects in his catalogue has been noted as curious. It is possible that Messier added them simply make his list longer than that of Nicolas Louis de Lacaille, whose 1755 catalogue counted 42 objects.

John Herschel catalogued Praesepe as h 517, describing it as “so very loose and straggling that it would only be noticed as a region rich in L [large] stars.” He later added the cluster to the General Catalogue as GC 1681.

A wide double star in the well known cluster Praesepe, on the Crab‘s body, enrolled by Messier on his celebrated list of 103, in 1769. A [mag] 6 1/2, and B 7 1/2, both white, being the sf [south following, SE] extreme of a wavy line represented by nine small stars.

The Praesepe, metamorphically rendered Bee-hive, is an aggregation of small stars which has long borne the name of a nebula, its components not being separately distinguishable by the naked eye; indeed, before the invention of the telescope, it was the only recognized one, for though that in Andromeda must have been seen, it attracted but little notice till the days of Simon Marius, in 1612. Whereas the Praesepe in Cancer engaged very early speculation; insomuch that both Aratus and Theophrastus tell us, that its dimness and disappearance during the progressive condensation of the atmosphere, were regarded as the first sign of approaching rain. The group is rather scanty in number, but splendid from the comparative magnitude of its constituents, which renders it a capital object for trying the light of a telescope. Yet Galileo discovered 36 small stars, when it was supposed that there were only three nebulous stars, which emitted the peculiar light. The Praesepe was called by the Arabians al-ma’laf, a stall or den; and also al-nathrah, the fissure between the Lion’s whiskers, – a district which formed the VIIIth Lunar Mansion. See Epsilon Cancri [Smyth’s No. CCCXXXIII (333)].

An occult line projected from Spica under Regulus, and about 22deg beyond the latter, runs through Praesepe; or it may be found by a ray from the Pleiades being brought mid-way between Procyon and Castor, which will pass over Epsilon, in Castor‘s knee. A line from Castor through Pollux, and continued about three times the distance betwen them, also reaches this remarkable cluster. 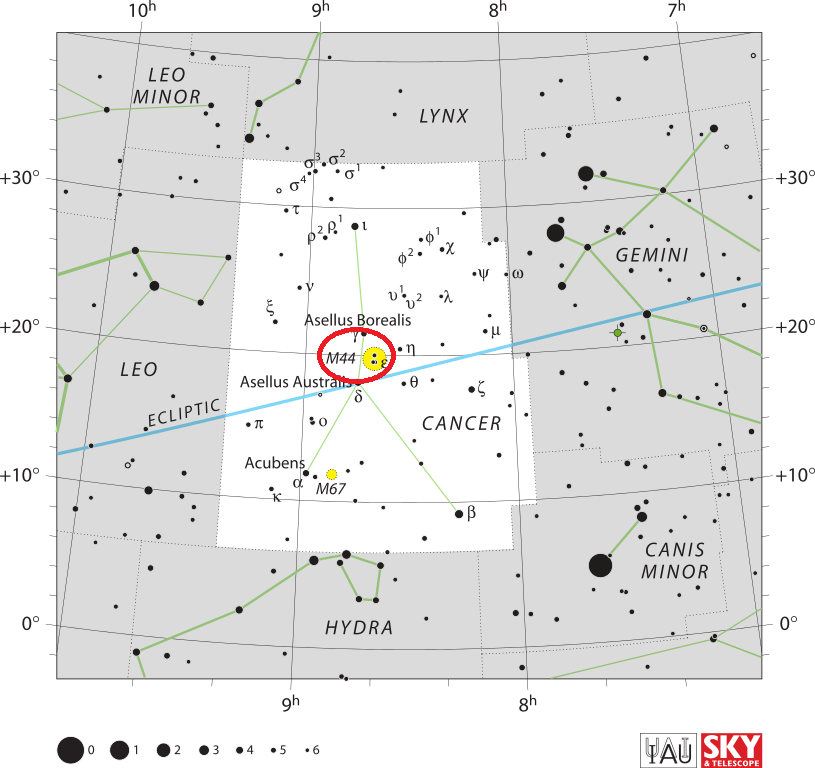