Messier 48 (M48) is an open star cluster located in Hydra, the largest constellation in the sky. The cluster has an apparent magnitude of 5.5 and lies at a distance of 1,500 light years from Earth. It has the designation NGC 2548 in the New General Catalogue.

Messier 48 can be seen without binoculars in good conditions. It lies near the border with the constellation Monoceros, the Unicorn. The cluster is quite conspicuous, occupying an area of 54 arc minutes of apparent sky, which corresponds to a spatial diameter of 23 light years.

The concentrated central region of M48 stretches across an area more than 30 arc minutes in size. The best time of year to observe the cluster is in the months of December, January and February. The best way to observe M48 is at low magnifications as it covers an area almost twice the size of the full Moon.

The cluster is easily seen in binoculars and small telescopes, which reveal about 50 stars brighter than magnitude 13. M48 has at least 80 members, including three giant stars of spectral types G to K. The hottest star in the cluster has the stellar classification A2 and a visual magnitude of 8.8. It is about 70 times more luminous than the Sun. The estimated age of M48 is 300 million years. 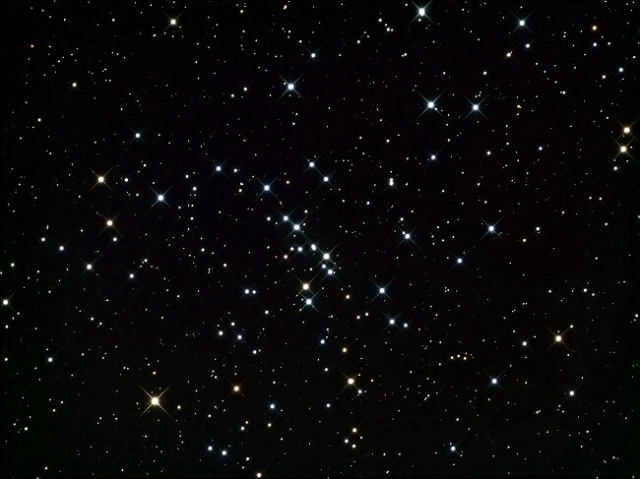 Charles Messier added the cluster to his catalogue on February 19, 1771. However, M48 was considered one of the lost Messier objects for a long time because the coordinates provided by Messier did not match those of NGC 2548: his declination was off by 5 degrees.

Messier described M48 as a “cluster of very small stars, without nebulosity,” noting that “this cluster is at a short distance from the three stars that form the beginning of the Unicorn‘s tail.“ 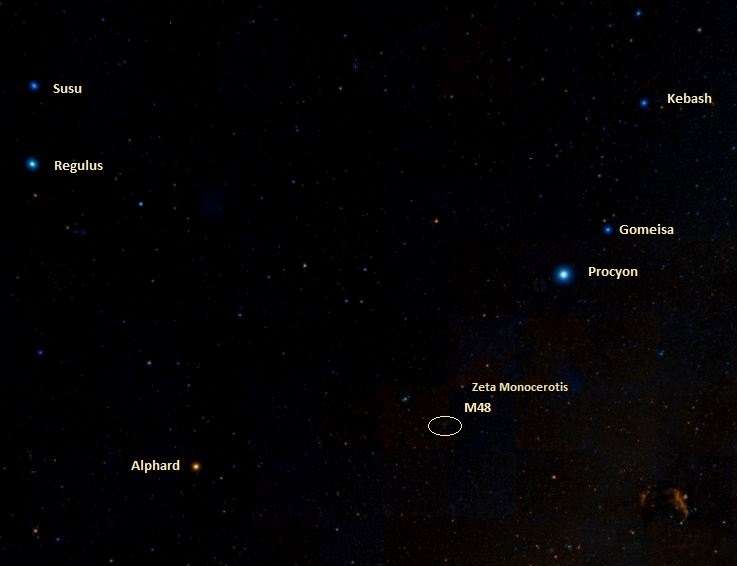 The position of Messier 48 in the sky. Image: Wikisky

As Messier’s 48th entry was considered lost, the cluster was independently discovered by the German astronomer Johann Elert Bode around 1782 and German-British astronomer Caroline Herschel on March 8, 1783. She noted that the cluster was “at an equal distance from 29 [Zeta] & 30 Monocerotis, making an equilateral triangle with those two stars is a nebulous spot. By the telescope it appears to be a cluster of scattered stars. It is not in Mess. catalogue.”

William Herschel included his sister’s discovery in his catalogue as H VI.22 on February 1, 1786. He described it as a “beautiful Cluster of much compressed stars, considerably rich. 10 or 12′ diameter.”

John Herschel catalogued the cluster as h 496 and later included it in the General Catalogue as GC 1637. After observing the object in February 1830, Herschel described it as a “superb cluster which fills the whole field; stars of 9th and 10th to the 13th magnitude – and none below, but the whole ground of the sky on which it stands is singularly dotted over with infinitely minute points [stars]. Place that of a bright star, the southern of two which point into the concavity of an arc.” 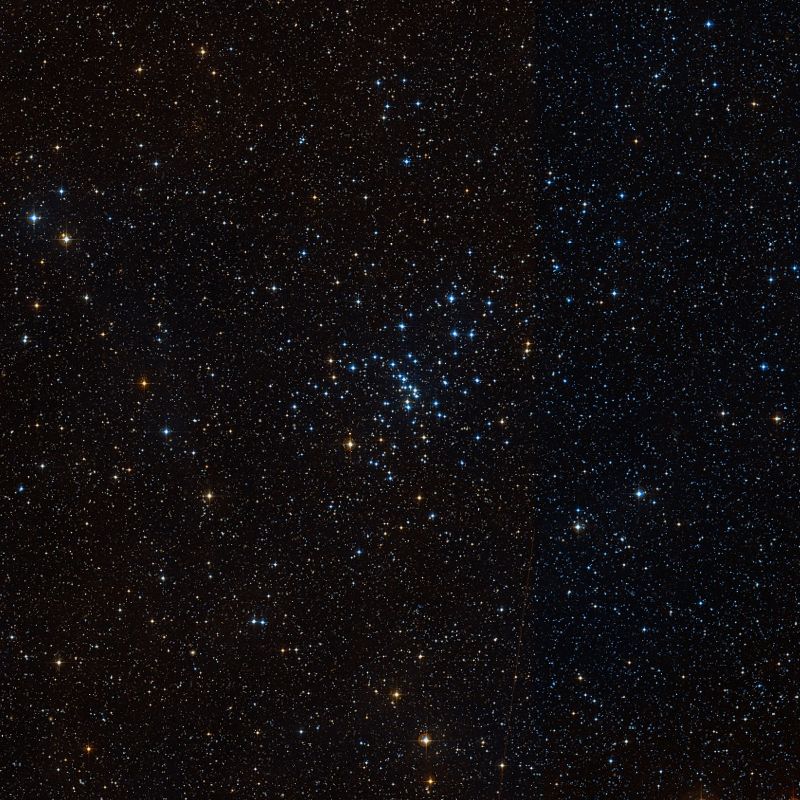 Admiral William Henry Smyth observed the cluster in April 1834 and noted the following:

A neat but minute double star, in a tolerably compressed cluster on the Unicorn‘s flank, and lying 14deg south-east of Procyon. A 9 1/2 [mag], and B 10, both white. This object is in the middle of a splendid group, in a rich splashy region of stragglers, which fills the field of view, and has several small pairs, chiefly of the 9th magnitude. It was discovered by Miss Herschel in 1783, and was classed by WH [William Herschel] in February, 1783. 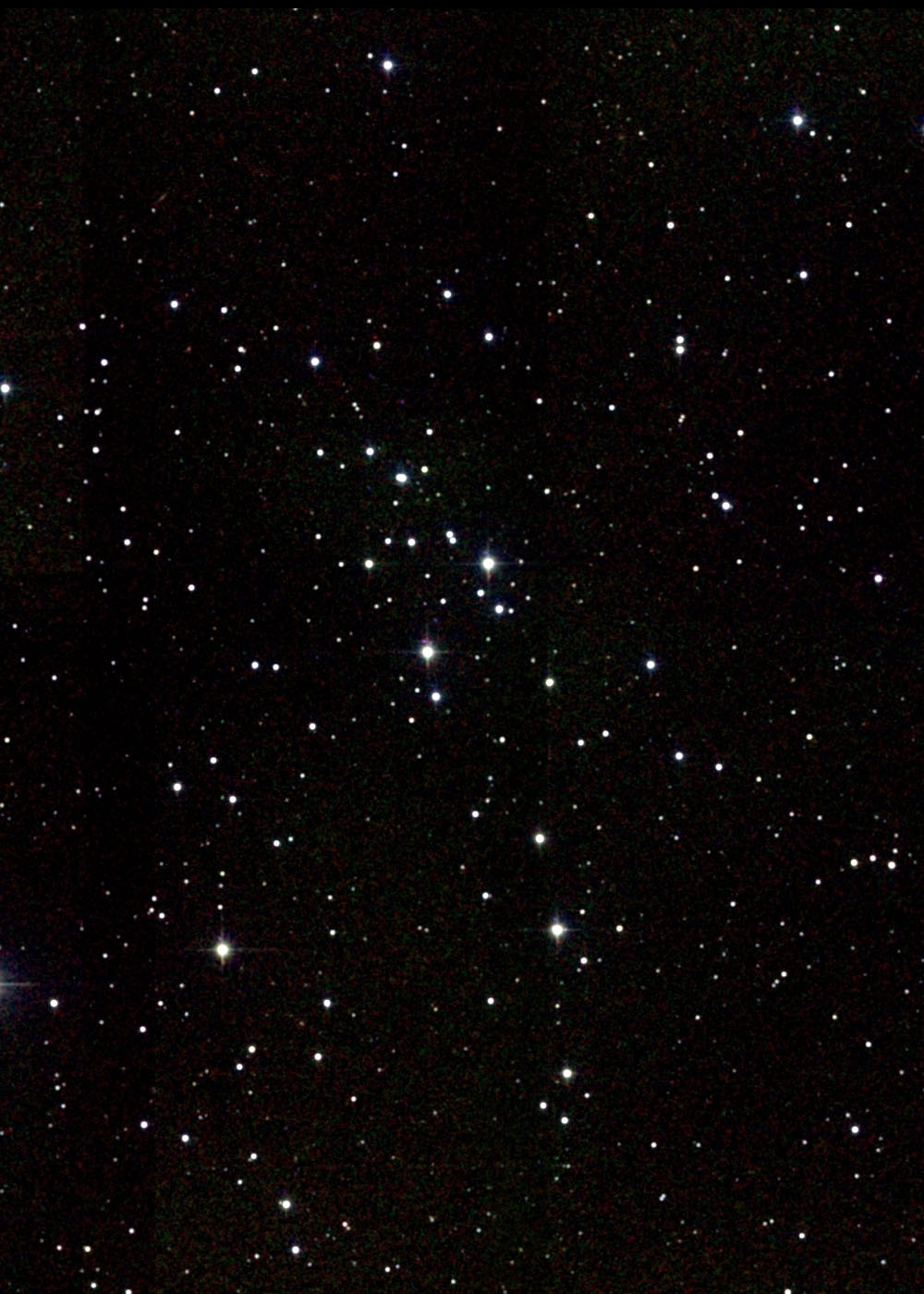 Messier 48. Atlas Image mosaic obtained as part of the Two Micron All Sky Survey (2MASS), a joint project of the University of Massachusetts and the Infrared Processing and Analysis Center/California Institute of Technology, funded by the National Aeronautics and Space Administration and the National Science Foundation. 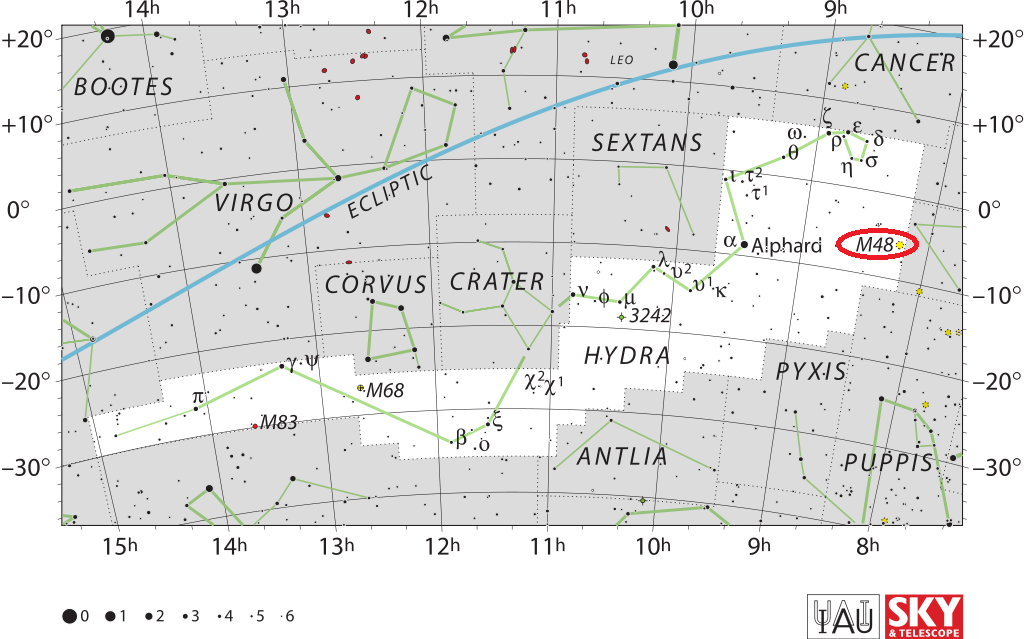