Messier 2 (M2) is a globular cluster located at an approximate distance of 37,500 light years from Earth, well beyond the galactic centre. The cluster lies in the direction of Aquarius constellation. It is one of the largest known clusters of its kind in the night sky, spanning about 175 light years in diameter. It has the designation NGC 7089 in the New General Catalogue.

Messier 2 has an apparent magnitude of 6.3 and is located five degrees north of the bright star Beta Aquarii, which is also known by the traditional name Sadalsuud. With an apparent magnitude of 2.87, Sadalsuud is the brightest star in Aquarius.  M2 is on the same declination as Alpha Aquarii, the constellation’s second brightest star. Alpha Aquarii, also known as Sadalmelik, lies 10 degrees northeast of cluster. Sadalsuud, Sadalmelik and Messier 2 form a large right-angled triangle.

Messier 2 is among the older globular clusters associated with the Milky Way. The cluster’s estimated age is 13 billion years, roughly the same as the age of the globular clusters Messier 3 and Messier 5, located in the constellations Canes Venatici and Serpens respectively. The Universe is estimated to be 13.8 billion years old, which means that the cluster likely formed when the Universe was only 6 percent of its current age, less than a billion years old. M2 is moving toward us at about 5.3 kilometres per second. 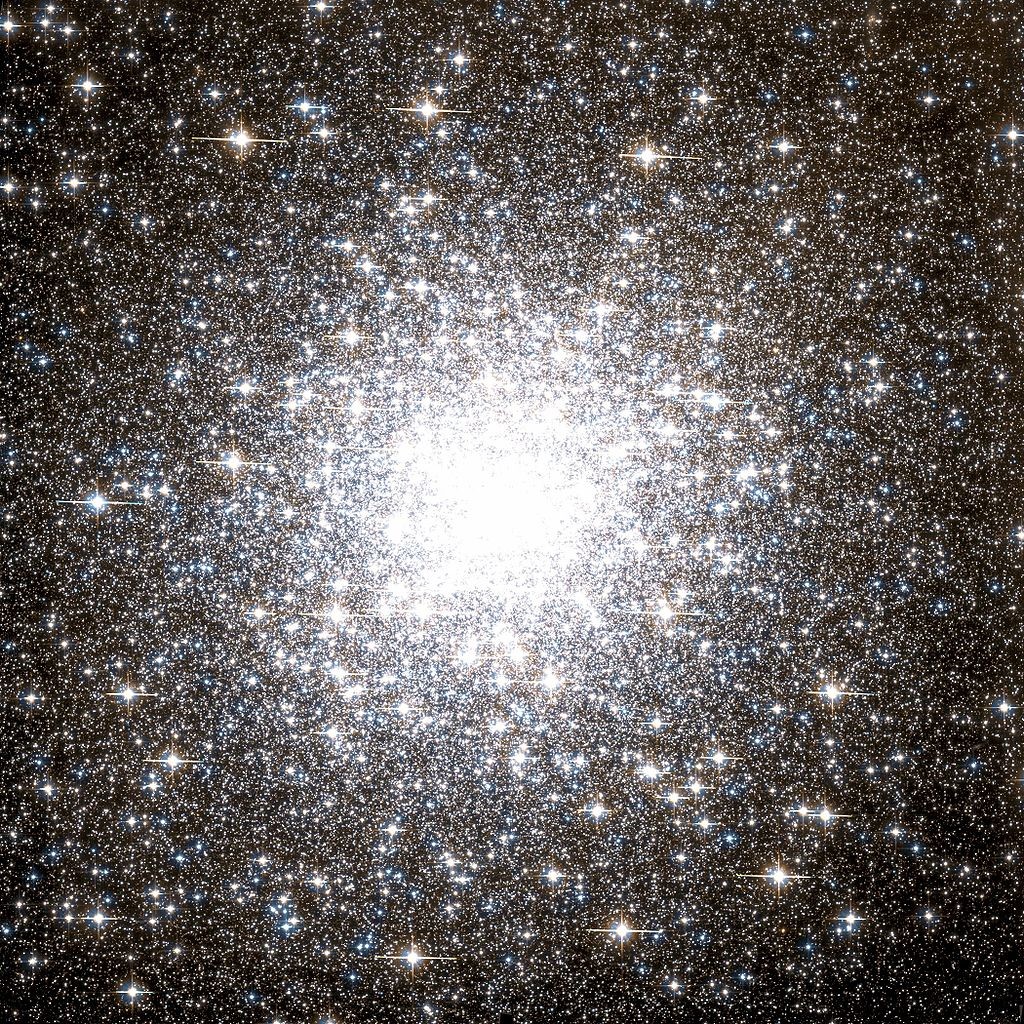 The cluster orbits in the halo of the Milky Way and contains some of our galaxy’s oldest known stars. As the stars are much older than the Sun, they have few elements heavier than hydrogen and helium, which makes the existence of Earth-like planets highly unlikely in the cluster.

M2’s tidal influence is significantly larger than its diameter and reaches about 233 light-years. This is the point beyond which member stars could escape the cluster because of the tidal gravitational forces from the Milky Way.

Messier 2 is dense and compact, containing approximately 150,000 stars within a diameter of 150 light years. The dense  central region of M2 is only 0.34 arc minutes across, corresponding to a diameter of 3.7 light years.

The cluster has one of the densest cores and belongs to the density class II on a scale of I to XII, with XII reserved for clusters that are the most diffuse at the core. 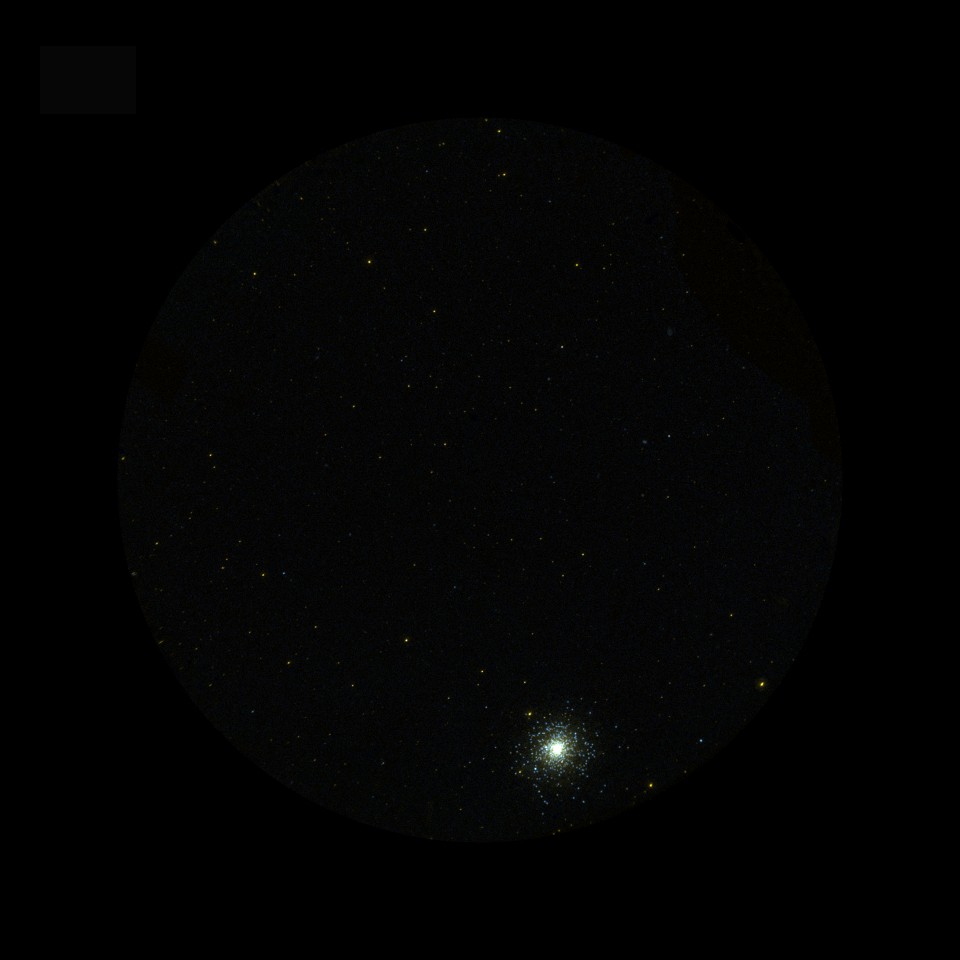 This image of the Globular cluster Messier 2 (M2) was taken by Galaxy Evolution Explorer on August 20, 2003. This image is a small section of a single All Sky Imaging Survey exposure of only 129 seconds in the constellation Aquarius. This picture is a combination of Galaxy Evolution Explorer images taken with the far ultraviolet (colored blue) and near ultraviolet detectors (colored red). Globular clusters are gravitationally bound systems of hundreds of thousands of stars that orbit in the halos of galaxies. The globular clusters in out Milky Way galaxy contain some of the oldest stars known. M2 lies 33,000 light years from our Sun with stars distributed in a spherical system with a radius of approximately 100 light years. Image: NASA/JPL/California Institute of Technology

The brightest stars in M2 are of magnitude 13.1 and mostly yellow and red giants. The cluster’s overall spectral class is F4.

Three Cepheid variables have also been identified in the cluster. Cepheids are luminous variable stars that also serve as indicators of galactic distance scales. These stars vary between a larger, brighter state and a smaller, denser one.  Cepheids were named after Delta Cephei in Cepheus constellation, the first variable star of this type to be identified.

One of the variable stars found in M2 is an RV Tauri variable, a luminous pulsating variable that exhibits changes in luminosity and spectral type over a 69.09 day period. The star is located at the eastern edge of M2. 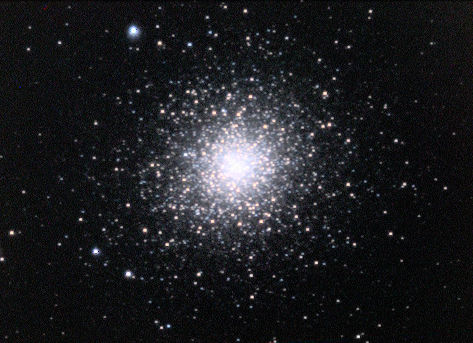 Maraldi wrote, “On September 11 I have observed another one [nebulous star, besides M15] for which the right ascension is 320d 7′ 19″ [21h 20m 29s], & the declination 1d 55′ 38″ south, very near to the parallel where the Comet should be. This one is round, well terminated and brighter in the center, about 4′ or 5′ in extent and not a single star around it to a pretty large distance; none can be seen in the whole field of the telescope. This appears very singular to me, for most of the stars one calls nebulous are surrounded by many stars, making one think that the whiteness found there is an effect of the light of a mass of stars too small to be seen in the largest telescopes. I took, at first, this nebula for the comet.” 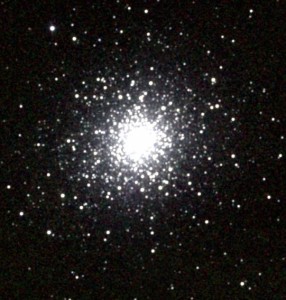 Atlas Image mosaic obtained as part of the Two Micron All Sky Survey (2MASS), a joint project of the University of Massachusetts and the Infrared Processing and Analysis Center/California Institute of Technology, funded by the National Aeronautics and Space Administration and the National Science Foundation.

Charles Messier spotted the cluster on September 11, 1760 – exactly 14 years after Maraldi’s discovery – and thought it was a nebula without any stars associated with it.

Messier’s entry read, “Nebula without star in the head of Aquarius, its center is brilliant, & the light surrounding it is round; it resembles the beautiful nebula which is situated between the head & the bow of Sagittarius [M22], it is seen very well with a telescope of 2 feet [FL], placed below the parallel [same Dec] of Alpha Aquarii. ”

Messier 2 was the first globular cluster to be included in Messier’s catalogue.

The German-British astronomer William Herschel was the first to resolve individual stars in M2, in 1783.

With an apparent magnitude of 6.3, Messier 2 is just at the edge of naked eye visibility, but requires extremely good viewing conditions, with clear skies and no light pollution. The best time of year to observe the cluster is between the months of July and October.

The globular cluster can be observed in binoculars and small telescopes, but individual stars can only be seen in larger instruments, starting with 6-inch telescopes. A peculiar dark lane can be seen crossing the northeast edge of the cluster in larger telescopes.

Larger instruments are required to resolve the stars because the cluster is very far away and the stars in it are old, so only the rare stars similar to the Sun and the occasional blue straggler are visible. Blue stragglers are main sequence stars found in clusters, that appear bluer and more luminous than stars at the main sequence turn-off point for the cluster.  American astronomer Allan Sandage discovered these stars in 1953 while studying the stellar population of the globular cluster Messier 3. 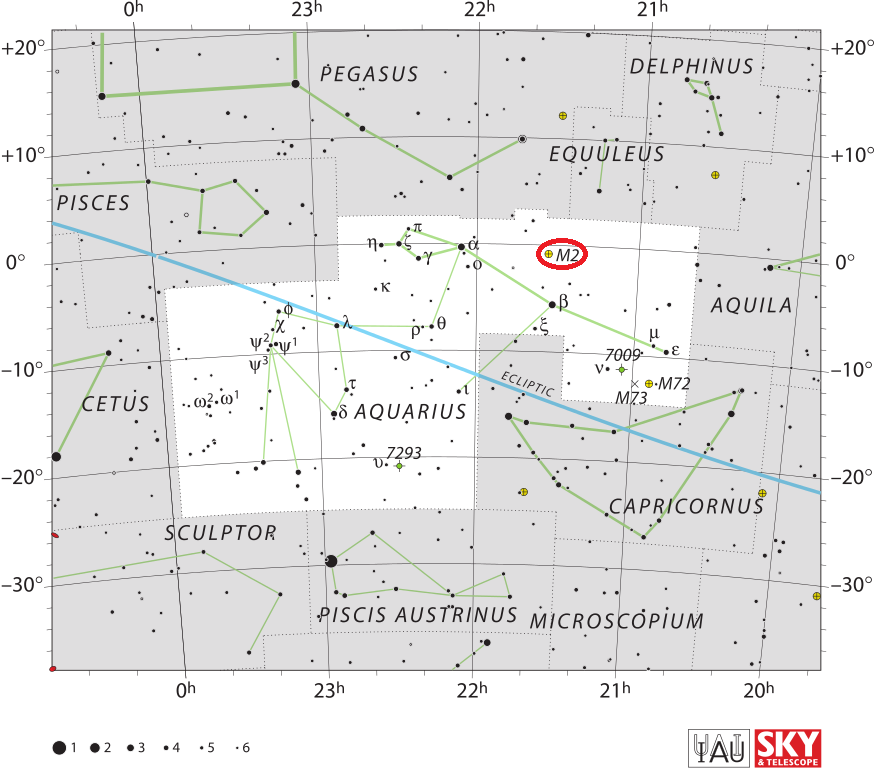