Messier 56 (M56) is a globular star cluster located in the small northern constellation Lyra. M56 has an apparent magnitude of 8.3 and lies at a distance of 32,900 light years from Earth. The cluster has the designation NGC 6779 in the New General Catalogue.

Messier 56 is relatively easy to find because it lies roughly halfway along the line from Albireo, Beta Cygni, to Sulafat, Gamma Lyrae. Albireo, a famous double star, marks the beak of the celestial Swan and the base of the Northern Cross, while Sulaphat can be located in Lyra, on the opposite side to the bright Vega.

The cluster can be a challenge in binoculars because it is quite dim and does not have a bright core. In large binoculars, it appears as a fuzzy patch or an out-of-focus star. To resolve it into individual stars, one needs an 8-inch or larger telescope.

4-inch telescopes show a round ball of light, but do not reveal much detail. Visually, observers can only see the cluster’s central region, about 3 arc minutes in diameter. The best time of year to observe M56 is during the summer months.

Messier 56 occupies an area of 8.8 arc minutes, which corresponds to a linear diameter of about 84 light years. It has a mass about 230,000 times that of the Sun. The estimated age of M56 is 13.7 billion years. 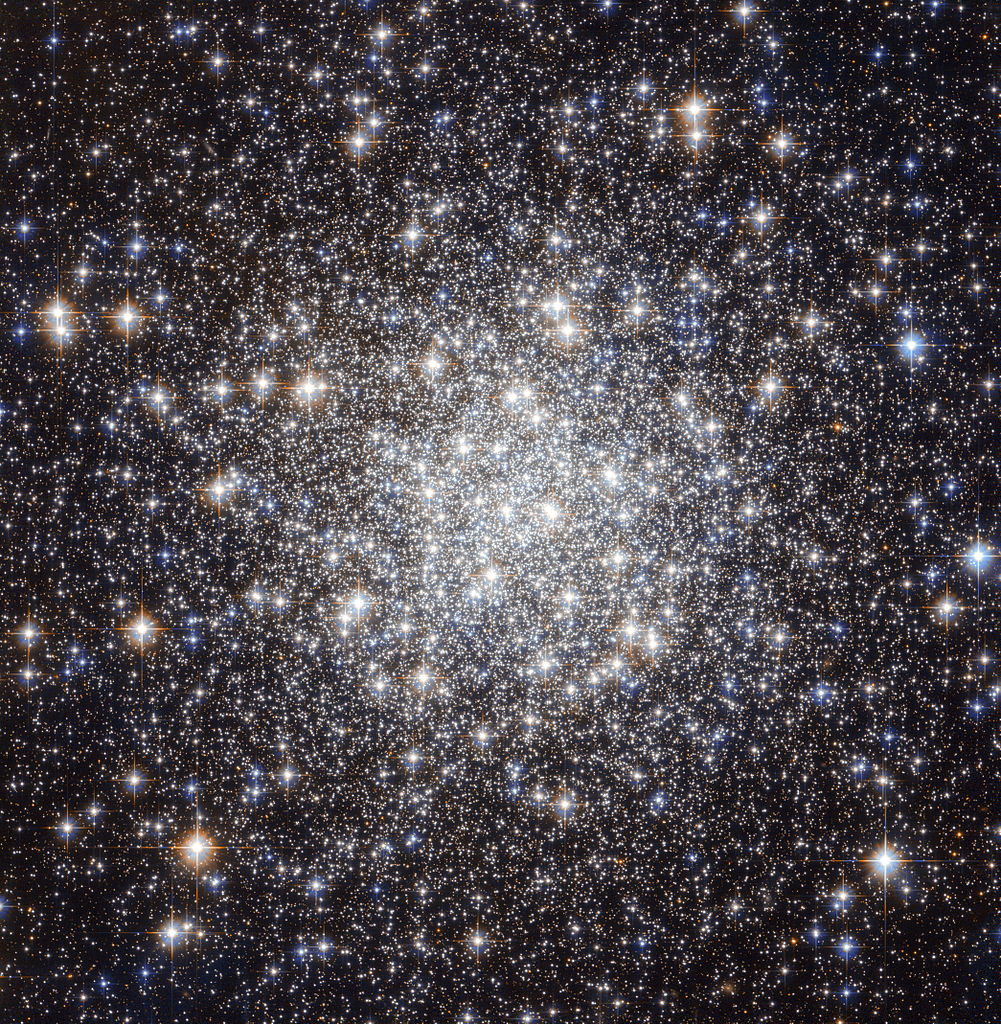 The NASA/ESA Hubble Space Telescope has produced this beautiful image of the globular cluster Messier 56 (also known as M 56 or NGC 6779), which is located about 33 000 light years away from the Earth in the constellation of Lyra (The Lyre). The cluster is composed of a large number of stars, tightly bound to each other by gravity.However, this was not known when Charles Messier first observed it in January 1779. He described Messier 56 as “a nebula without stars”, like most globular clusters that he discovered — his telescope was not powerful enough to individually resolve any of the stars visible here, making it look like a fuzzy ball through his telescope’s eyepiece. We clearly see from Hubble’s image how the development of technology over the years has helped our understanding of astronomical objects. Astronomers typically infer important properties of globular clusters by looking at the light of their constituent stars. But they have to be very careful when they observe objects like Messier 56, which is located close to the Galactic plane. This region is crowded by “field-stars”, in other words, stars in the Milky Way that happen to lie in the same direction but do not belong to the cluster. These objects can contaminate the light, and hence undermine the conclusions reached by astronomers. This image consists of visible and near-infrared exposures from Hubble’s Advanced Camera for Surveys. The field of view is approximately 3.3 by 3.3 arcminutes. Image: NASA & ESA. Acknowledgement: Gilles Chapdelaine

The cluster has only 1 percent of the Sun’s metallicity, or abundance of elements heavier than hydrogen and helium. The overall spectral type of M56 is F5. The cluster is approaching us at 145 km/s.

The properties of M56 indicate that the cluster may have become part of our galaxy when the Milky Way devoured a dwarf galaxy. The nucleus of the smaller galaxy is believed to have survived as Omega Centauri, the famous globular cluster located in the southern constellation Centaurus.

Messier 56 is located relatively close to Messier 57, the famous Ring Nebula, which is the only other Messier object found in Lyra. 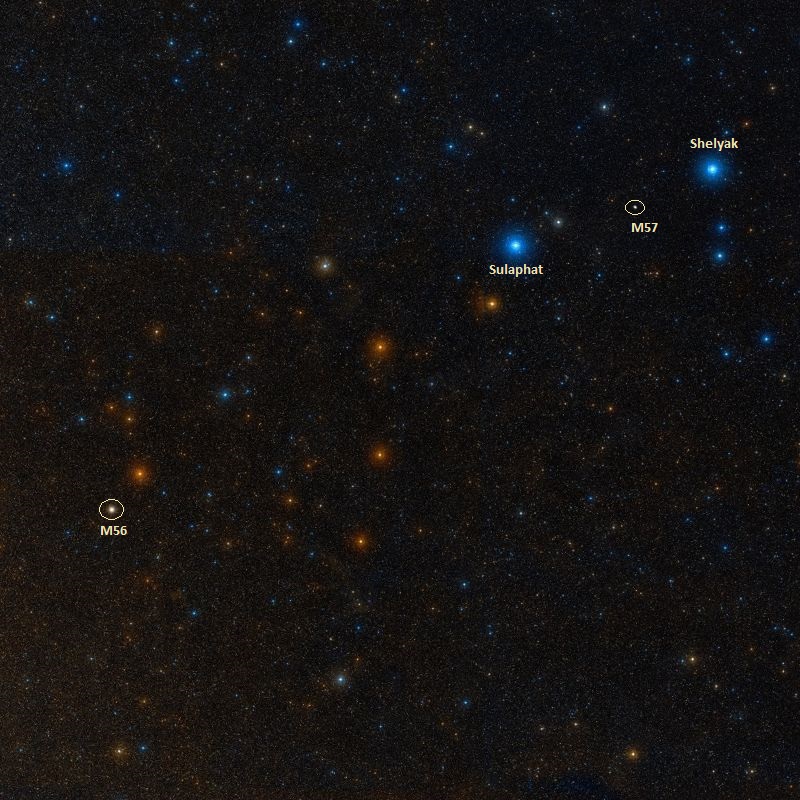 The cluster was discovered by Charles Messier on January 19, 1779. He offered the following description:

Nebula without stars, having little light; M. Messier discovered it on the same day as he found the comet of 1779, January 19. On the 23rd, he determined its position by comparing it with the star 2 Cygni, according to Flamsteed: it is near the Milky Way; and close to it is a star of 10th magnitude. M. Messier reported it on the chart of the comet of 1779.

William Herschel was the first to resolve M56 into stars around 1784. He described it as a “globular cluster of very compressed small stars about 4 or 5 minutes in diameter.”

John Herschel catalogued the object as h 2036 in 1825 and later added it to his General Catalogue as GC 4485, describing it as a “globular cluster; bright; large; irregularly round; gradually very much compressed toward the middle; well resolved; stars from 11th to 14th magnitude.” 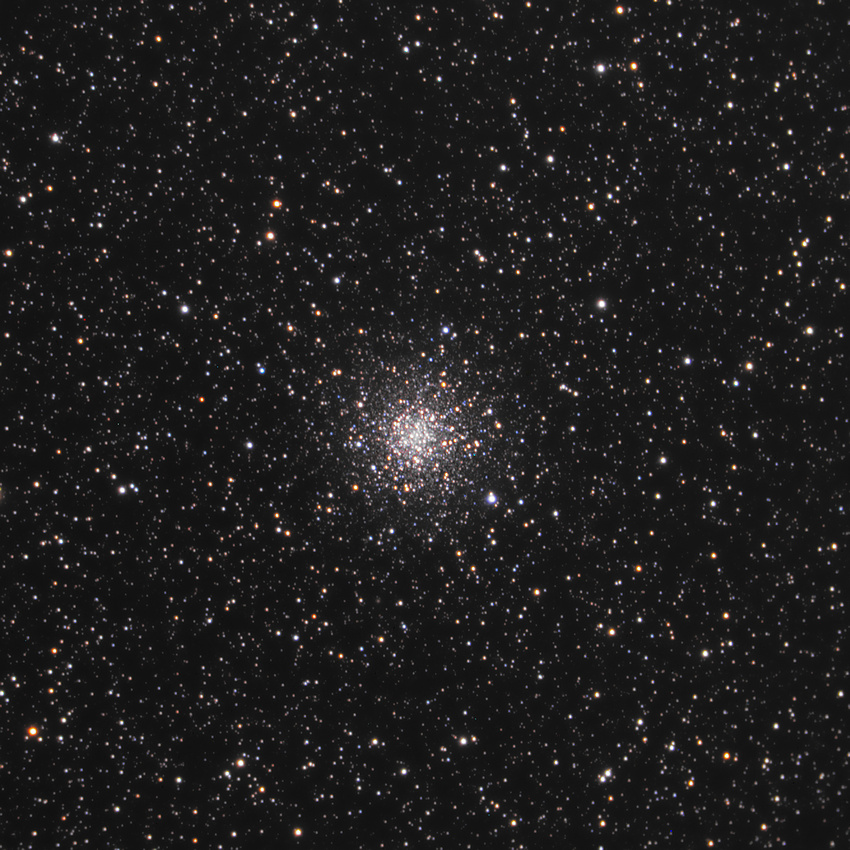 Wiliam Henry Smyth observed the cluster in July 1835 and noted the following:

A globular cluster, in a splendid field, between the eastern joke of Lyra‘s frame and the Swan‘s head: it is 5 1/4 deg distant from Beta Lyrae, on the south-east line leading to Beta Cygni, which is about 3 1/2 deg further. This object was first registered by M. Messier in 1778, and, from his imperfect means, described as a nebula of feeble light, without a star. In 1784, it was resolved by Sir William Herschel, who, on gauging, considered its profundity to be of the 344th order. 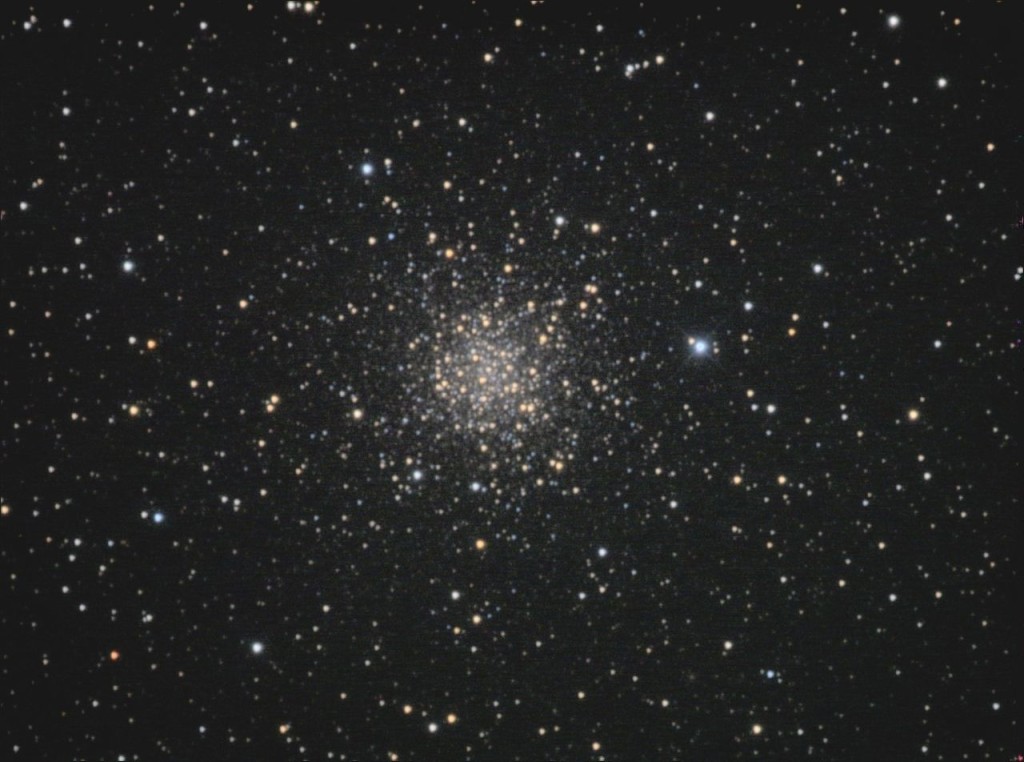